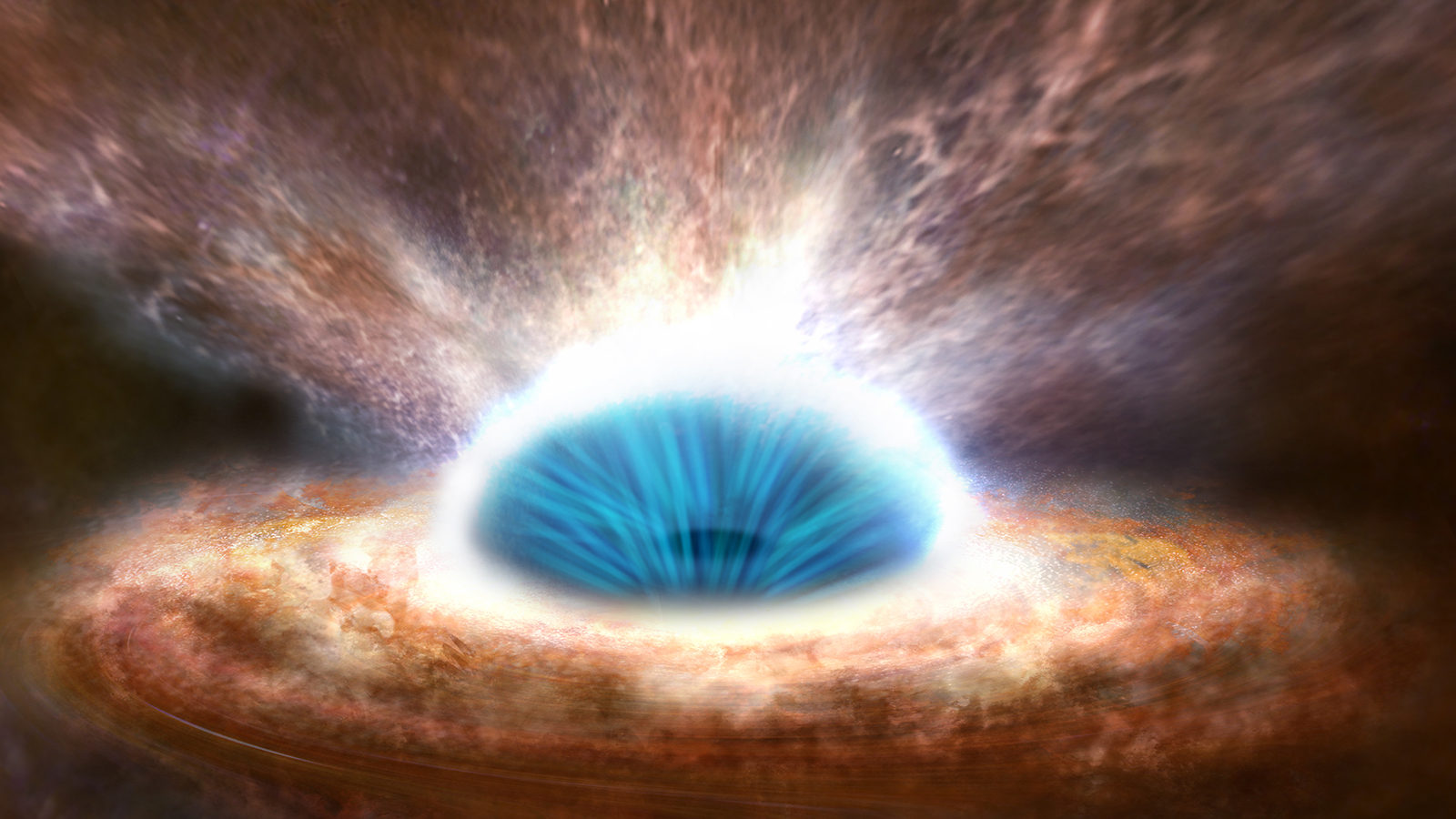 Although the star-covered night sky is regarded by many as a synonym of serenity, the cosmos is in fact a rather hostile place. It hosts many extreme environments that would instantaneously eradicate any life nearby. A new space mission is about to reveal this violent nature in greater detail than ever before: On Feb. 17, the Japan Aerospace Exploration Agency (JAXA) launched its ASTRO-H satellite, a very precise and sensitive eye for X-rays emerging from hot and energetic processes in space. After its successful lift-off, the spacecraft was renamed “Hitomi,” which means “pupil of the eye” in Japanese.

The observatory will collect the X-ray signals of countless cosmic objects from its orbit around the Earth, including hot gas in galaxy clusters, powerful particle streams spit out by black holes, and the remnants of supernova explosions with very dense, rapidly rotating neutron stars at their center. These data will provide new insights into many aspects of astrophysics and cosmology, such as the physics of black holes; the formation of chemical elements, stars and galaxies; and the evolution of the universe itself.

“The launch of Hitomi represents the beginning of a new era for X-ray observatories,” says Roger Blandford from the Kavli Institute for Particle Astrophysics and Cosmology (KIPAC), a joint institute of Stanford University and the Department of Energy’s SLAC National Accelerator Laboratory. “Its novel instruments will allow us to make new discoveries involving dark matter, dark energy, black holes and neutron stars.”

The X-ray satellite was developed by a large international collaboration, led by JAXA and with NASA as a principal partner. KIPAC researchers were involved in the prototyping of one of the observatory’s scientific instruments, the development of methods used for instrument calibration and the planning of the mission’s science program.

Watch the launch of the X-ray satellite ASTRO-H on board H-IIA Launch Vehicle No. 30 from the Tanegashima Space Center in Japan.

Seeing more of the universe with X-rays

X-rays are an energetic form of light. They are emitted by matter under extreme conditions, such as high temperature, strong gravity, fast rotation, violent collisions, tremendous explosions, strong magnetic fields and nuclear reactions. Observations of cosmic X-ray sources provide astrophysicists with the opportunity to identify and study these extreme environments.

X-rays also paint a different and complementary picture of the universe compared to other light. Visible light, for instance, is not powerful enough to shine through dense clouds of dust—seemingly impenetrable curtains for objects behind them. Energetic X-rays, on the other hand, can go right through these clouds and lift the curtain.

Moreover, X-rays can reveal the chemical composition of extreme states of matter because each chemical element leaves a unique fingerprint on the X-ray emission signal. Hitomi will detect these fingerprints with 30 times better resolution than any other X-ray observatory before.

“We’ll now be able to identify specific elements without any doubt, whereas in the past we couldn’t quite tell,” says KIPAC’s Grzegorz Madejski. But researchers will learn even more than that, he says. Hitomi’s superior energy resolution will also reveal tiny shifts in the energy of the X-ray signal —so-called Doppler shifts linked to the speed of the observed material.

Seeking answers to fundamental questions about the universe

Chemical composition and speed are key information for scientists who want to understand the history of our universe.

“We’ll be able to tell whether the motion of hot gas in galaxy clusters is steady or turbulent,” says KIPAC’s Steve Allen. “This motion is an important ingredient in our models of galaxy formation, which, in turn, impact our picture of cosmic evolution.”

Hitomi will also shine light on winds of hot gas in the vicinity of black holes. Astrophysicists believe that the elemental composition of gas might be different near the matter-devouring objects, and unearthing these variations could advance our understanding of how chemical elements have formed in the universe.

The new X-ray observatory’s outstanding energy resolution is also expected to help researchers decide whether or not an X-ray signal with an energy of approximately 3.5 kiloelectronvolts, which has been caught emanating from a number of galaxies and galaxy clusters, could reveal the nature of dark matter, an invisible form of matter that makes up 85 percent of all matter in the universe.

Many of these research capabilities are associated with Hitomi’s Soft X-ray Spectrometer (SXS), which is at the heart of the observatory’s unsurpassed energy resolution and will analyze the energies of X-ray emissions in greater detail than ever before.

SXS is joined by three other instruments: the Soft X-ray Imager (SXI) and Hard X-ray Imager (HXI), which will photograph sources that emit X-rays of low and high energy, respectively, as well as the Soft Gamma-ray Detector (SGD), which will observe light of even higher energies.

“The SGD instrument has a very novel design and will allow us for the first time to measure the polarization of X-ray emissions,” says KIPAC’s Hirokazu Odaka. “This property will tell us more about the shape of the X-ray sources and their magnetic fields.”

A number of KIPAC researchers were involved in developing the SGD instrument and its read-out electronics. Together with SLAC’s Makoto Asai, who leads the lab’s team for Geant4, a toolkit for the simulation of particles passing through matter, they also carefully modeled SGD’s sensitivity and background signals—an important step toward calibrating the instrument for precise X-ray measurements.

Scientists around the world are now getting ready to use Hitomi, which is scheduled to operate for at least three years. Following an initial operation and calibration period of three months, the Hitomi science working group, including KIPAC scientists, will begin first observations. After six months, the observatory will be open to all scientists, and observation time will be based on submitted research proposals. 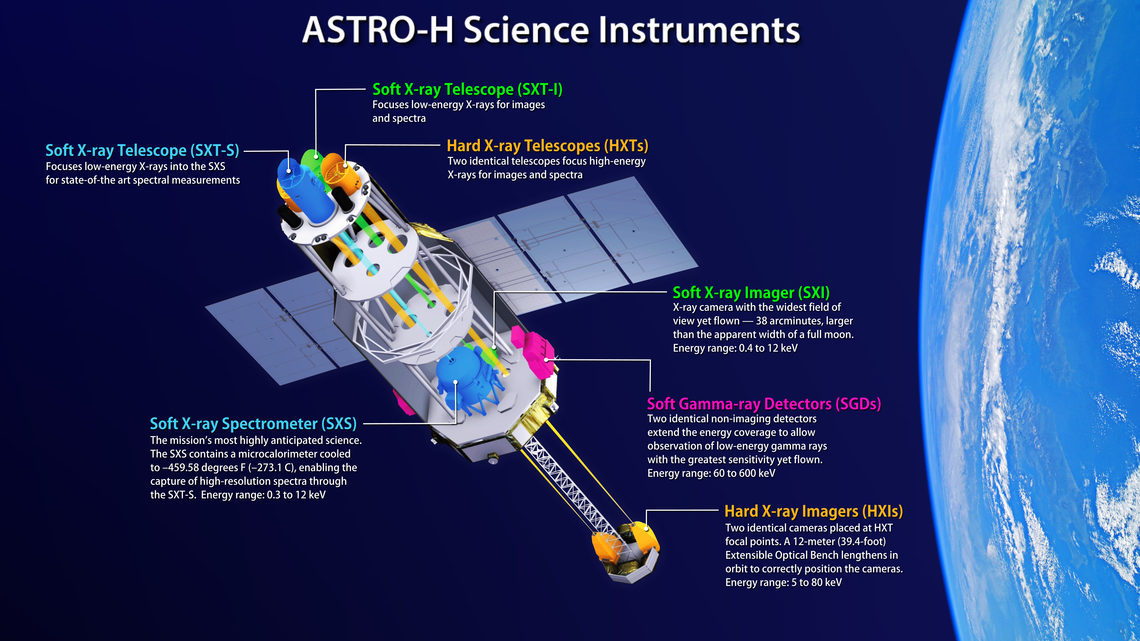 This illustration shows the locations and energy ranges of ASTRO-H (now Hitomi) science instruments and their associated telescopes. One kiloelectronvolt (keV) is hundreds of times the energy of visible light.

A version of this article appeared in SLAC's News Center.