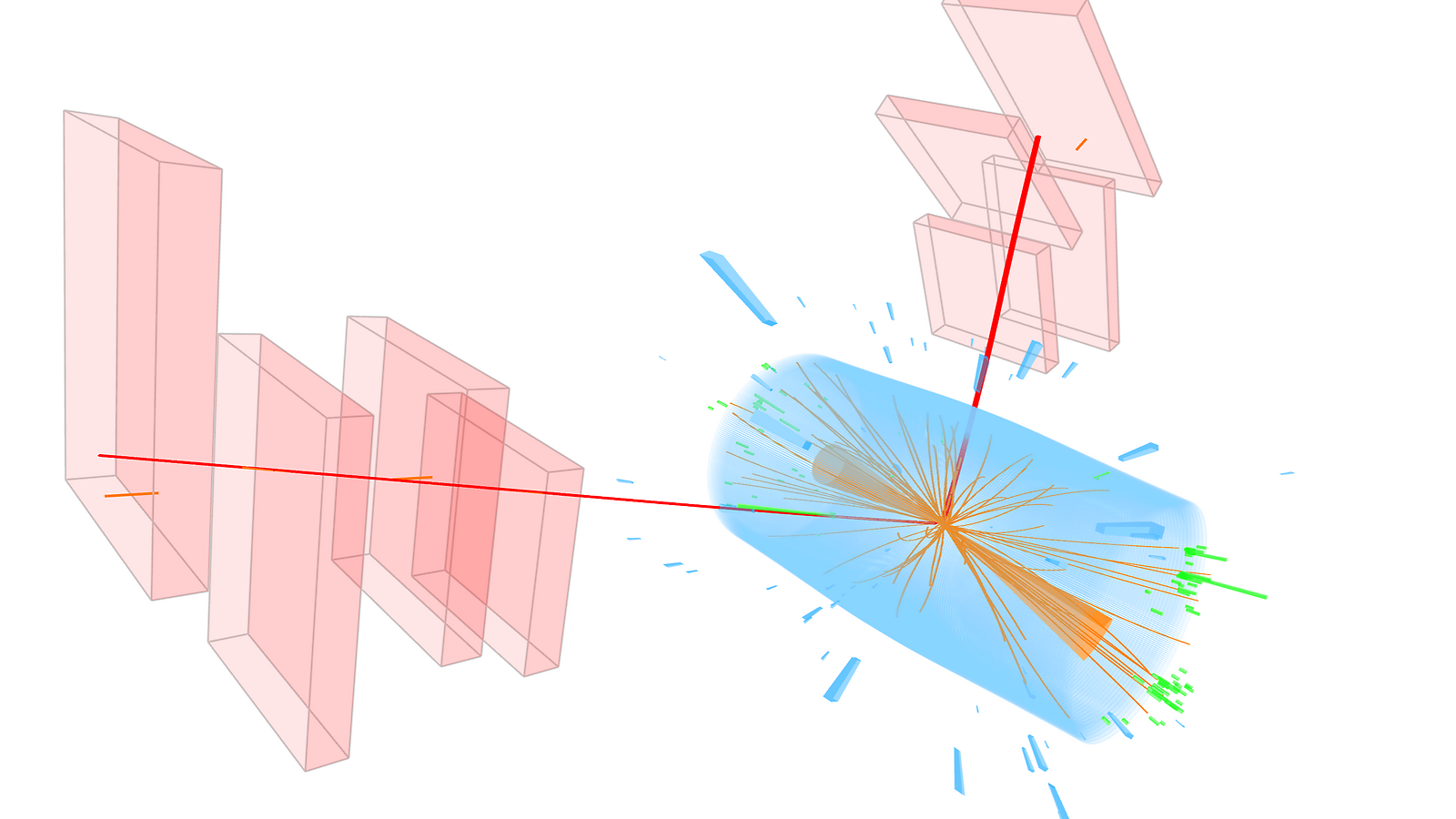 Immediately after the Big Bang, every particle in the universe traveled at the speed of light. And then the Higgs field—an invisible and sticky medium that permeates the entire universe—fell into place. Some particles didn’t even notice the shift. But others felt a sudden jolt as their point-like bodies burgeoned with something completely new: mass.

It was this break in symmetry—the random sorting of particles according to mass—that made the universe look the way it does today. Or so the theory goes, based on the Standard Model of particle physics, the simplest (but still incomplete) living history of the universe and the particles that populate it.

“By studying the Higgs boson, we can test the Standard Model and look for portals towards new physics.”

“The Standard Model explains how elementary particles become massive, but it doesn’t really explain why some particles are so light while others are so heavy,” he says. “There could be a larger reason beyond the Higgs field.”

Today, physicists are looking for answers about the origin of mass and matter in the universe by closely examining the Higgs field’s most famous byproduct—the Higgs boson. At the recent International Conference on High-Energy Physics, scientists on experiments at the Large Hadron Collider announced that they have begun to see the first signs of a Higgs behavior no one had seen before.

The Higgs boson was discovered in 2012 by physicists working on the CMS and ATLAS experiments at the LHC, supported by CERN member states and other contributing countries including the United States, via the US Department of Energy’s Office of Science and the National Science Foundation. “That was a huge opening in our understanding of nature,” Vartak says.

Since then, physicists have been mapping how the Higgs boson interacts with massive particles.

“The heavier an elementary particle is, the stronger it will interact with the Higgs boson,” says Hongtao Yang, a postdoctoral research associate at the US Department of Energy’s Lawrence Berkeley National Laboratory. “By studying the Higgs boson, we can test the Standard Model and look for portals towards new physics.”

So far, physicists have concretely charted how the Higgs boson interacts with heavy particles, such as bottom quarks, top quarks and tau leptons. But more challenging is the search for the Higgs boson interacting with lighter particles, such as the ones that make up atoms and most of the matter in the world around us: up quarks, down quarks and electrons.

“Fermions, which are the building blocks of ordinary matter in our universe, can be classified into three generations,” Yang says. “We have seen the Higgs boson interacting with third-generation particles, which are the heaviest, but we still don’t have a definite answer if the Higgs field plays a role in generating masses for others.”

The rate at which a Higgs boson interacts with different types of particles is largely determined by the particle’s mass. Heavy bottom quarks, for instance, make up the majority of Higgs boson decays. But a Higgs boson decaying into electrons—whose mass is about 8000 times smaller than that of a bottom quark—is approximately the same odds as winning the Powerball jackpot (1 in 200,000,000.)

Because of these odds, scientists might never see evidence of the Higgs interacting with everyday particles. Luckily, there is a slightly heavier particle that is similar to the electron and one that the ATLAS and CMS detectors are well equipped to see: the muon.

Higgs bosons have a 1 in 5000 chance of decaying into muons. With the high collision rate of the LHC, this process should happen inside the CMS and ATLAS detectors about once every 8 hours. However, it’s not easy to pick these events out from an ocean of look-alikes.

“The LHC is much more likely to produce Z bosons or a virtual photon, which can be close in mass to the Higgs and can also decay into two muons,” Yang says. “Our life is already difficult because this Higgs boson decay is so rare, and on top of that, our signal-to-background ratio is on the order of 1 to 1000.”

To search for a Higgs boson decaying into muons, teams of scientists on the CMS and ATLAS experiments are using every tool available to them. For instance, Yang and his colleagues on ATLAS used a supercomputer at Berkeley Lab to generate 10 billion events simulating a significant source of background: Z bosons and virtual photons decaying into muons.

Because the signal is so small against a huge amount of background noise, “to have reliable results, we need to be extremely careful with our background estimates,” Yang says. “We don’t have enough statistical power from the data alone.”

Separately, Vartak and his colleagues on CMS subdivided the analysis into the different Higgs production mechanisms and then used machine learning to separate each type of unique Higgs signature from similar-looking background events, a strategy also employed by ATLAS.

“We wanted to squeeze out the best possible performance from the data,” says Vartak. “That’s why it took almost two years for us to do the analysis.”

ATLAS recently announced that they are starting to see the outlines of a Higgs-like signal rise above the background, and CMS recently crossed the statistical evidence threshold for this process. But to make an irrefutable discovery, both experiments need more data, which they will continue to gather at the LHC in the years to come.

“This is a very important channel because we have never seen the Higgs coupling to particles this light before,” Yang says. “Observation will be the final word, and we still have a lot of work to do.”