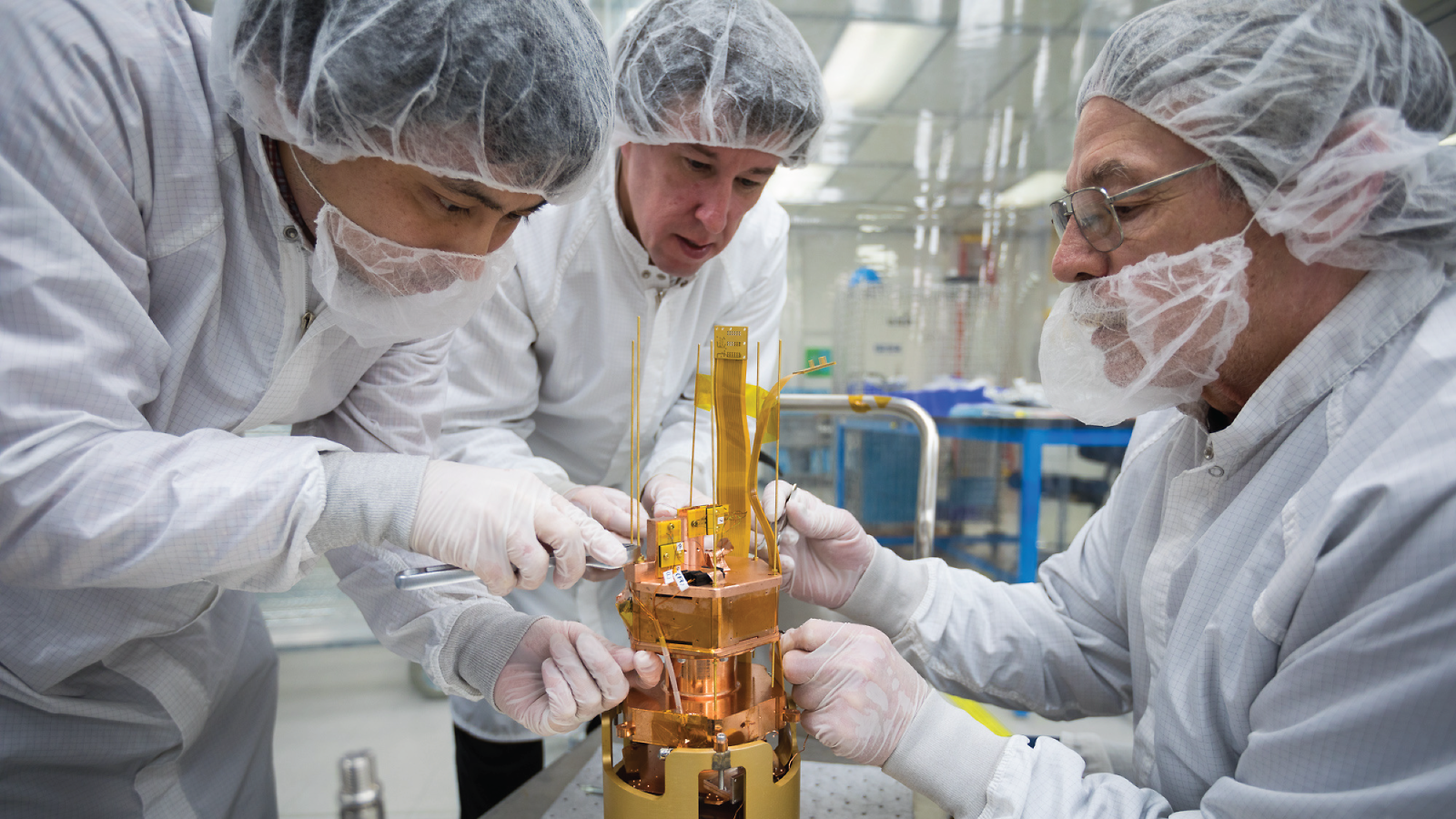 When an extraordinarily sensitive dark matter experiment goes online at one of the world’s deepest underground research labs, the chances are better than ever that it will find evidence for particles of dark matter—a substance that makes up 85 percent of all matter in the universe but whose constituents have never been detected.

The heart of the experiment, called SuperCDMS SNOLAB, will be one of the most sensitive detectors for hypothetical dark matter particles called WIMPs, short for “weakly interacting massive particles.” SuperCDMS SNOLAB is one of two next-generation experiments (the other one being an experiment called LZ) selected by the US Department of Energy and the National Science Foundation to take the search for WIMPs to the next level, beginning in the early 2020s.

“The experiment will allow us to enter completely unexplored territory,” says Richard Partridge, head of the SuperCDMS SNOLAB group at the Kavli Institute for Particle Astrophysics and Cosmology, a joint institute of Stanford University and SLAC National Accelerator Laboratory. “It’ll be the world’s most sensitive detector for WIMPs with relatively low mass, complementing LZ, which will look for heavier WIMPs.”

The experiment will operate deep underground at Canadian laboratory SNOLAB inside a nickel mine near the city of Sudbury, where 6800 feet of rock provide a natural shield from high-energy particles from space, called cosmic rays. This radiation would not only cause unwanted background in the detector; it would also create radioactive isotopes in the experiment’s silicon and germanium sensors, making them useless for the WIMP search. That’s also why the experiment will be assembled from major parts at its underground location.

A detector prototype is currently being tested at SLAC, which oversees the efforts of the SuperCDMS SNOLAB project.

Colder than the universe

The only reason we know dark matter exists is that its gravity pulls on regular matter, affecting how galaxies rotate and light propagates. But researchers believe that if WIMPs exist, they could occasionally bump into normal matter, and these collisions could be picked up by modern detectors.

SuperCDMS SNOLAB will use germanium and silicon crystals in the shape of oversized hockey pucks as sensors for these sporadic interactions. If a WIMP hits a germanium or silicon atom inside these crystals, two things will happen: The WIMP will deposit a small amount of energy, causing the crystal lattice to vibrate, and it’ll create pairs of electrons and electron deficiencies that move through the crystal and alter its electrical conductivity. The experiment will measure both responses.

“Detecting the vibrations is very challenging,” says KIPAC’s Paul Brink, who oversees the detector fabrication at Stanford. “Even the smallest amounts of heat cause lattice vibrations that would make it impossible to detect a WIMP signal. Therefore, we’ll cool the sensors to about one hundredth of a Kelvin, which is much colder than the average temperature of the universe.”

These chilly temperatures give the experiment its name: CDMS stands for “Cryogenic Dark Matter Search.” (The prefix “Super” indicates that the experiment is more sensitive than previous detector generations.)

The use of extremely cold temperatures will be paired with sophisticated electronics, such as transition-edge sensors that switch from a superconducting state of zero electrical resistance to a normal-conducting state when a small amount of energy is deposited in the crystal, as well as superconducting quantum interference devices, or SQUIDs, that measure these tiny changes in resistance.

The experiment will initially have four detector towers, each holding six crystals. For each crystal material—silicon and germanium—there will be two different detector types, called high-voltage (HV) and interleaved Z-sensitive ionization phonon (iZIP) detectors. Future upgrades can further boost the experiment’s sensitivity by increasing the number of towers to 31, corresponding to a total of 186 sensors. 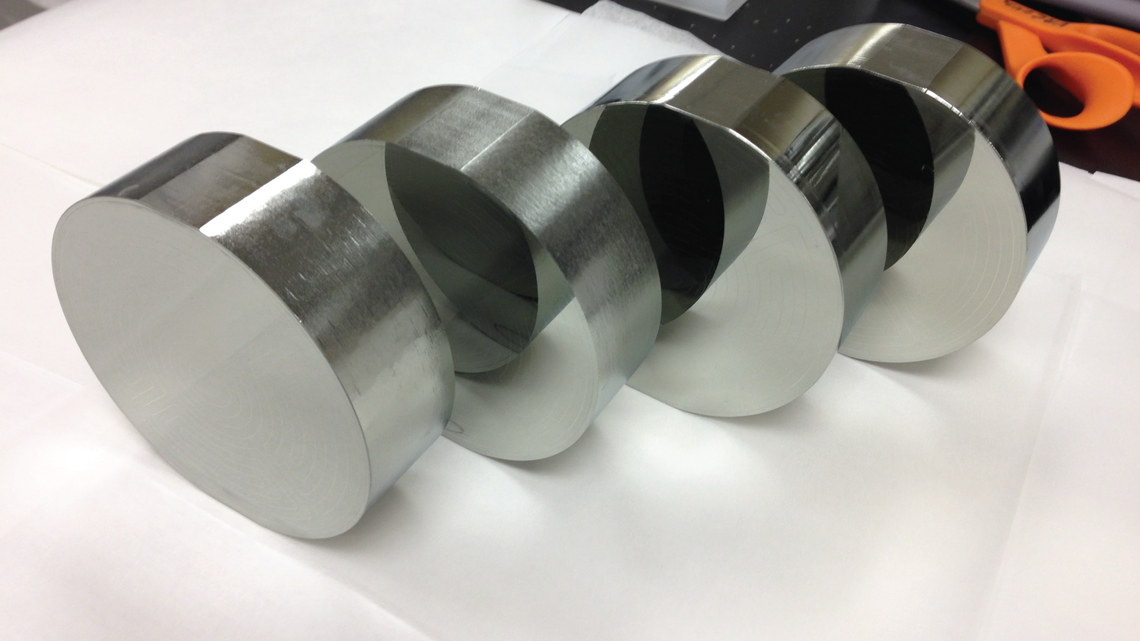 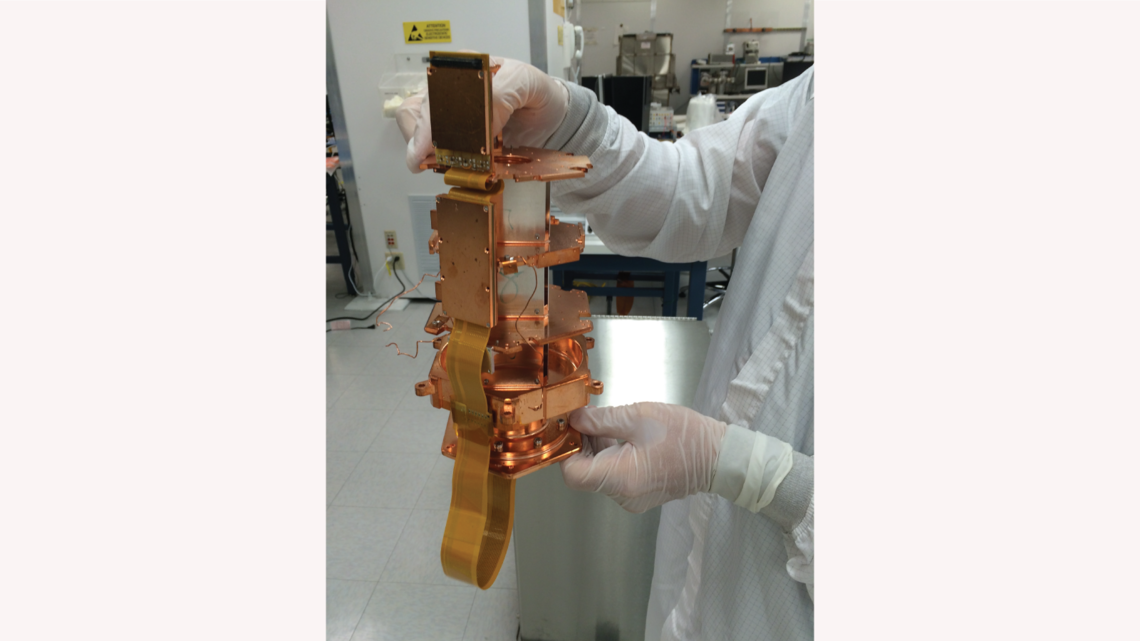 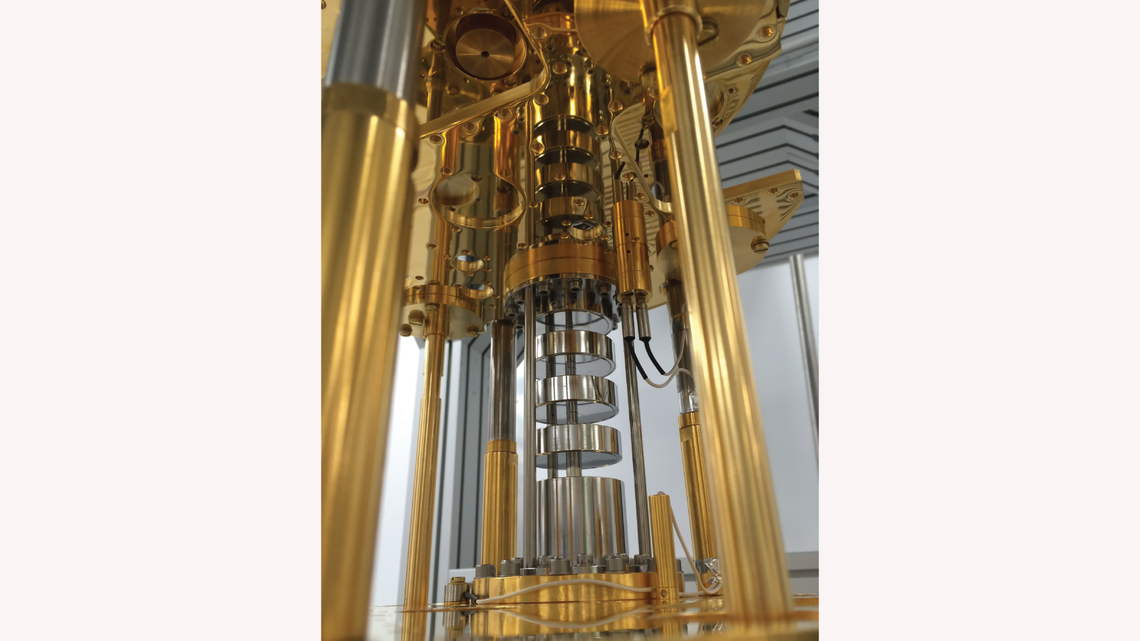 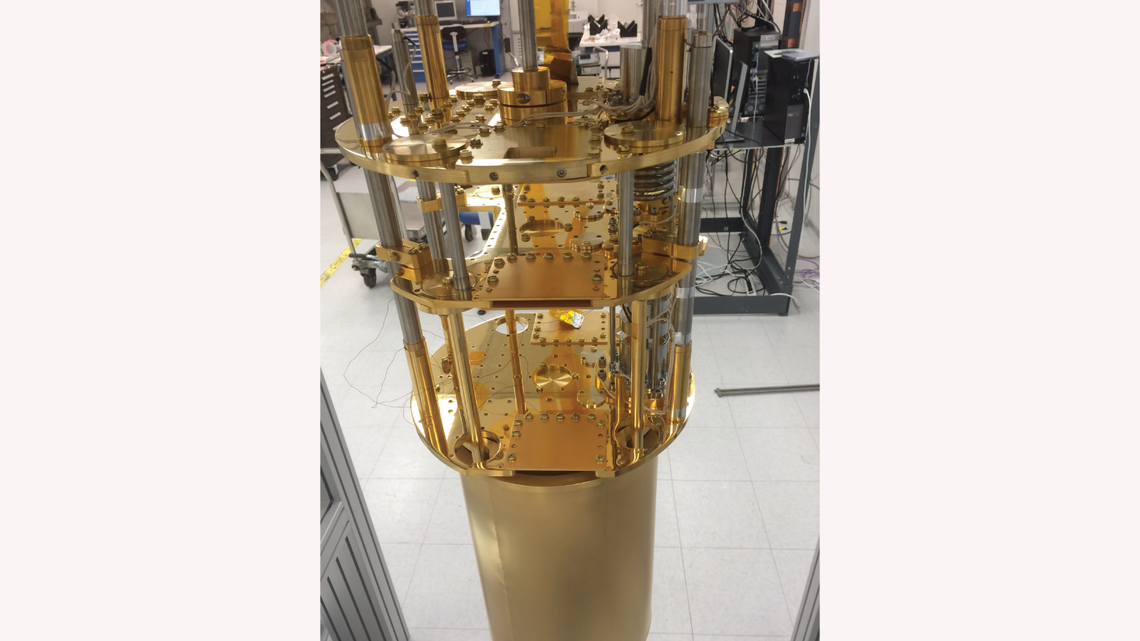 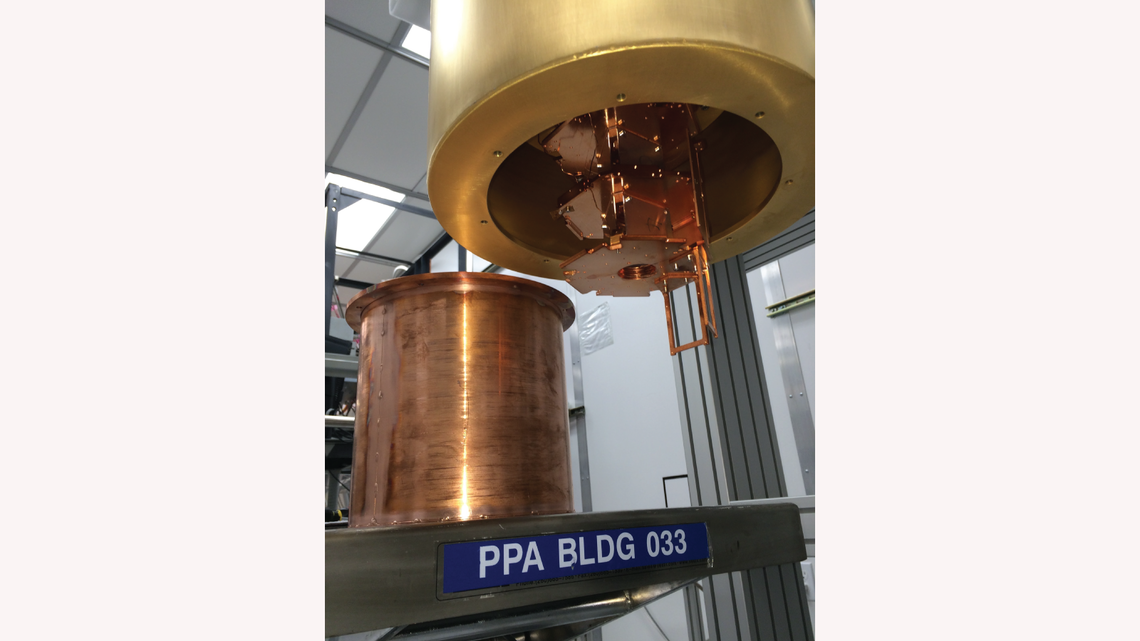 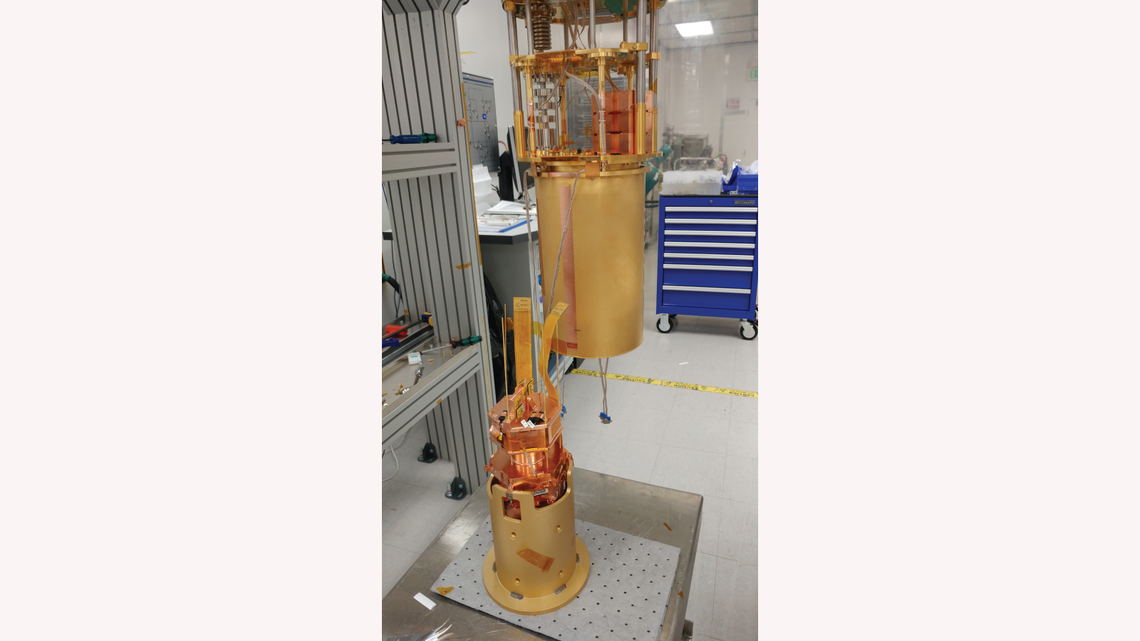 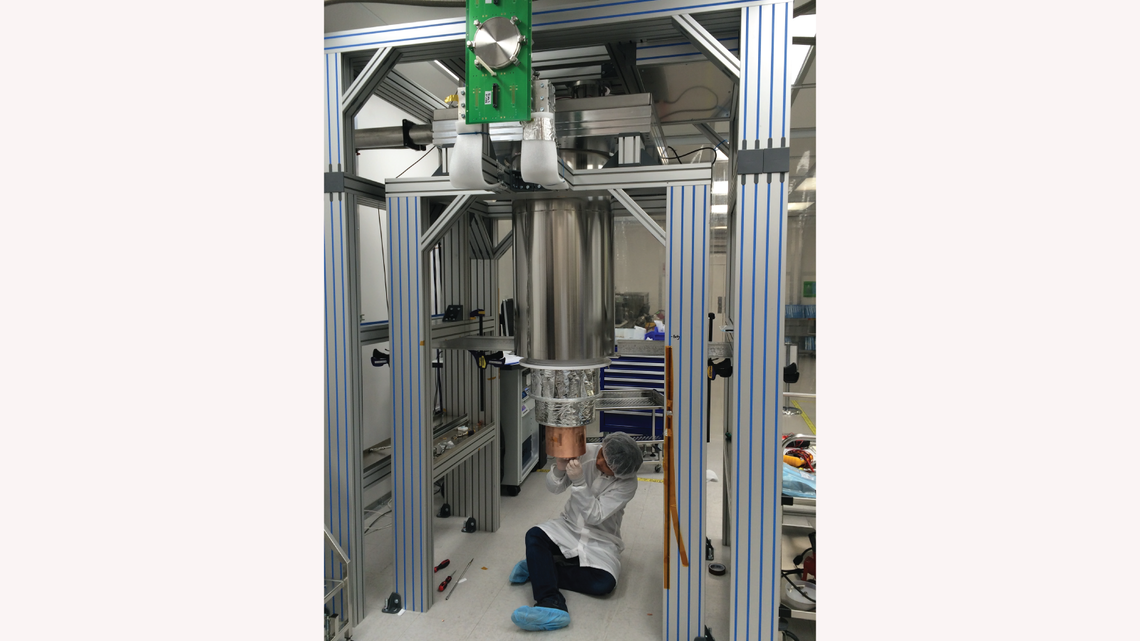 Tsuguo Aramaki completes the assembly of the dilution fridge test facility at SLAC. 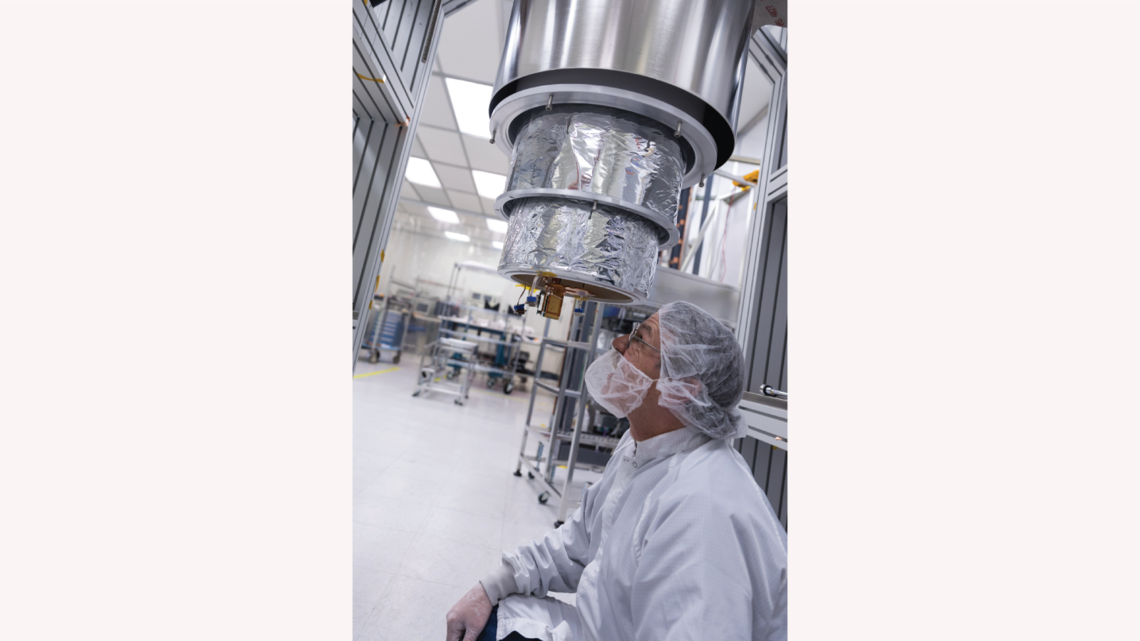 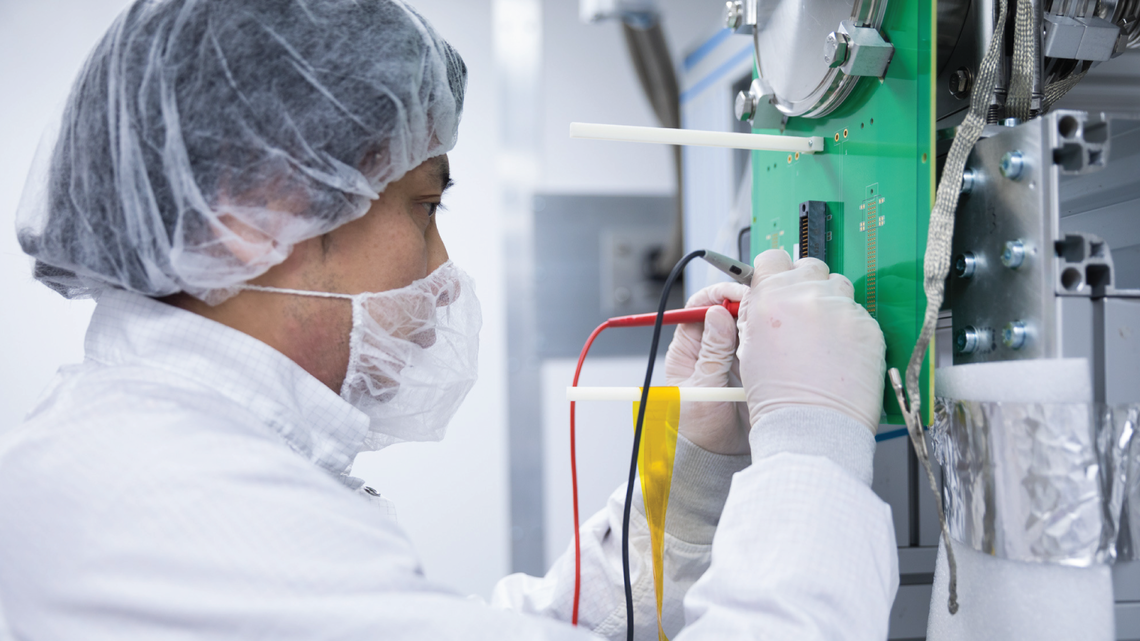 Tsuguo Aramaki of SLAC performs a diagnostic checkout of a SNOLAB Tower installed in the dilution fridge test facility. 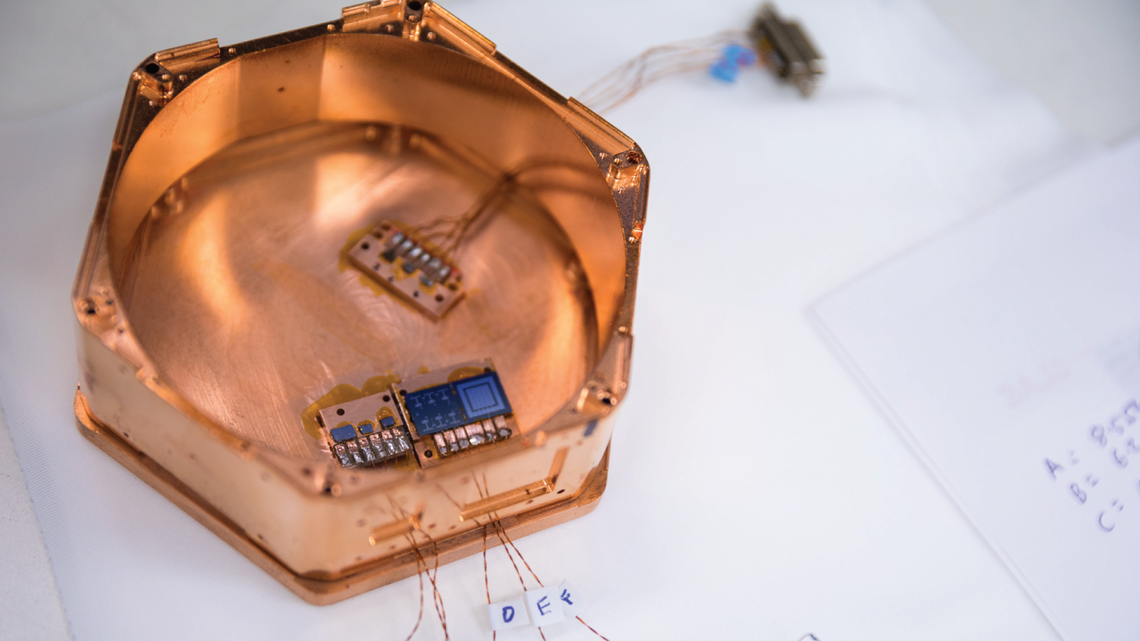 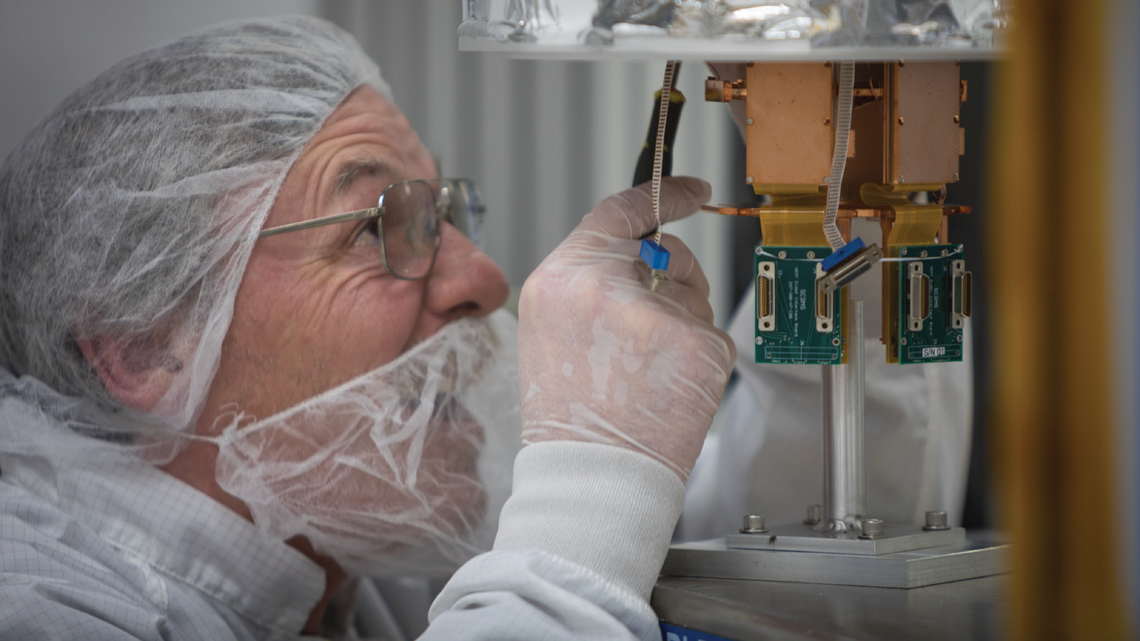 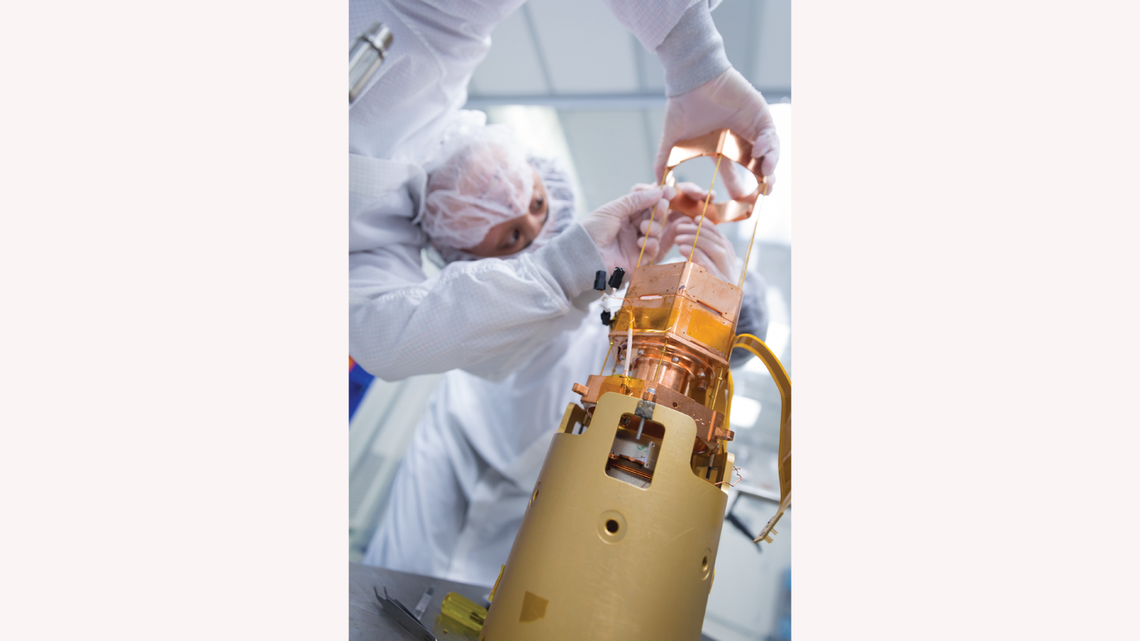 Tsuguo Aramaki of SLAC builds the detector stack on the SNOLAB Engineering Tower. 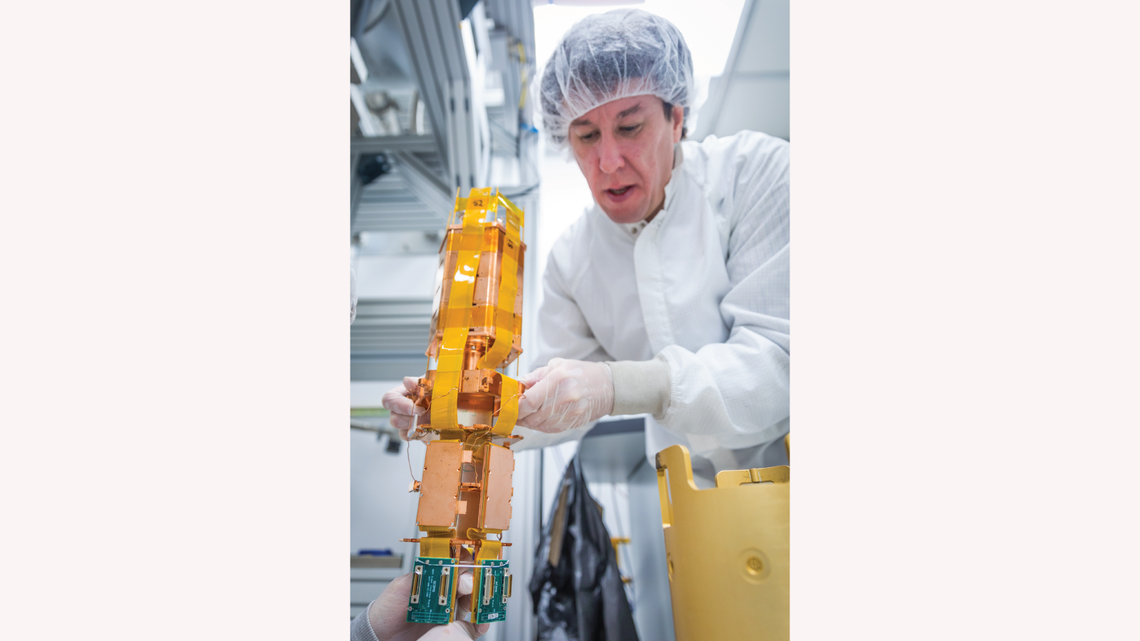 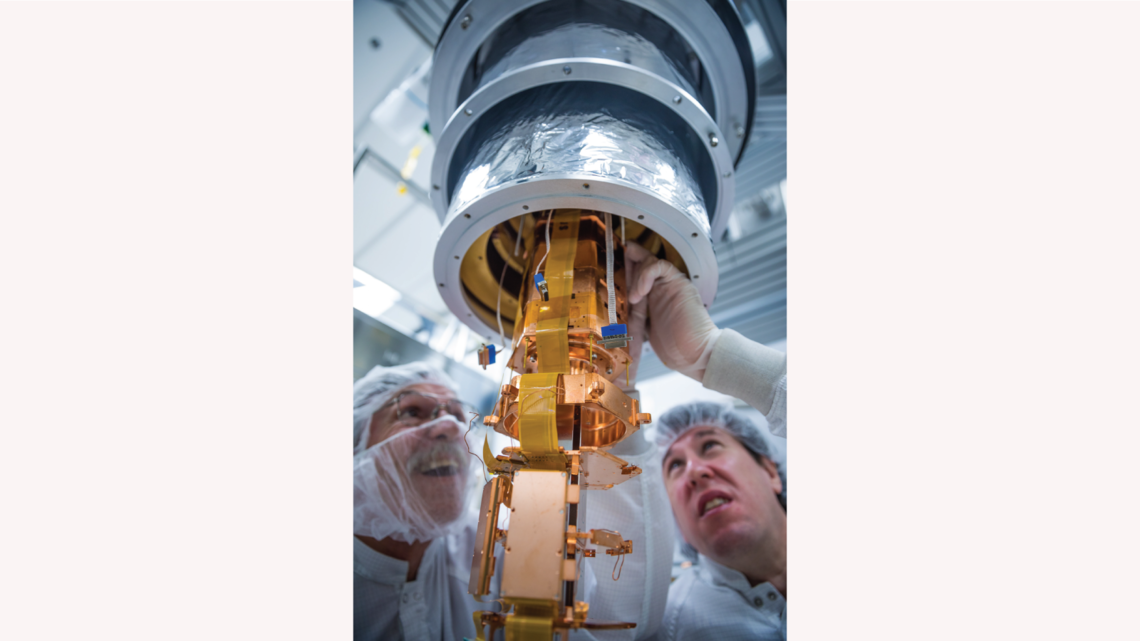 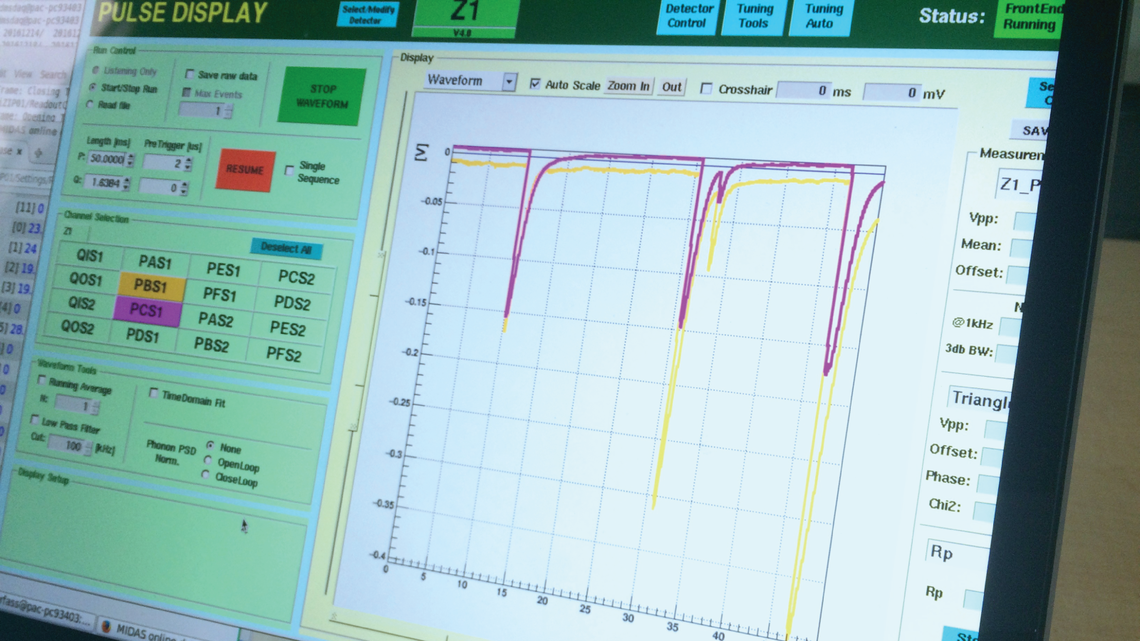 A display shows the first photons from the SuperCDMS SNOLAB HV detector run in the SLAC dilution fridge test facility. 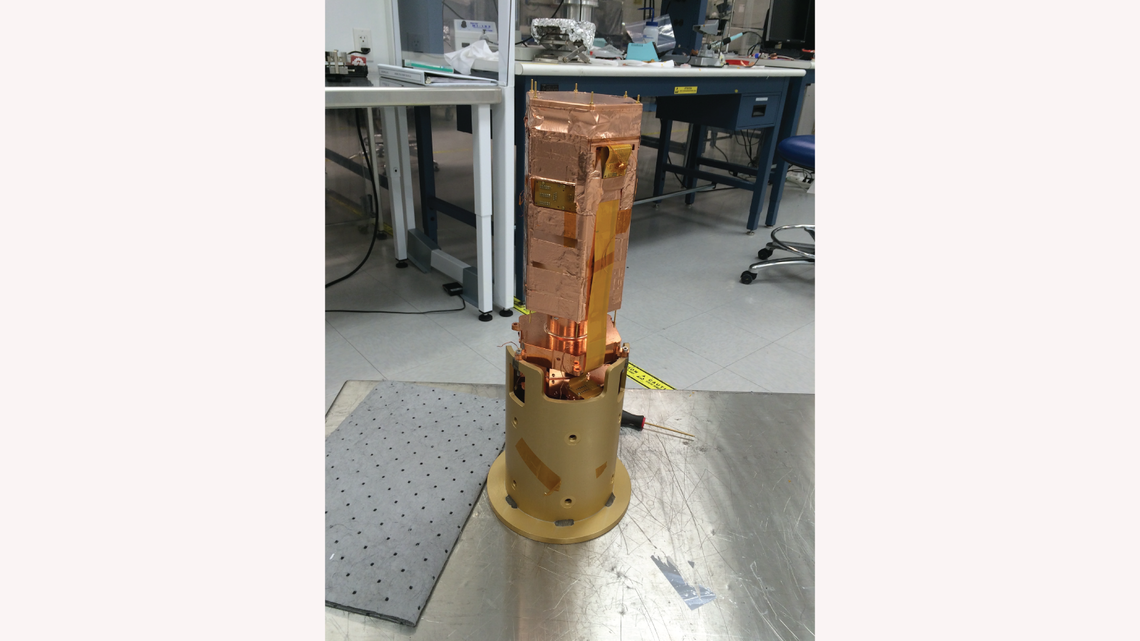 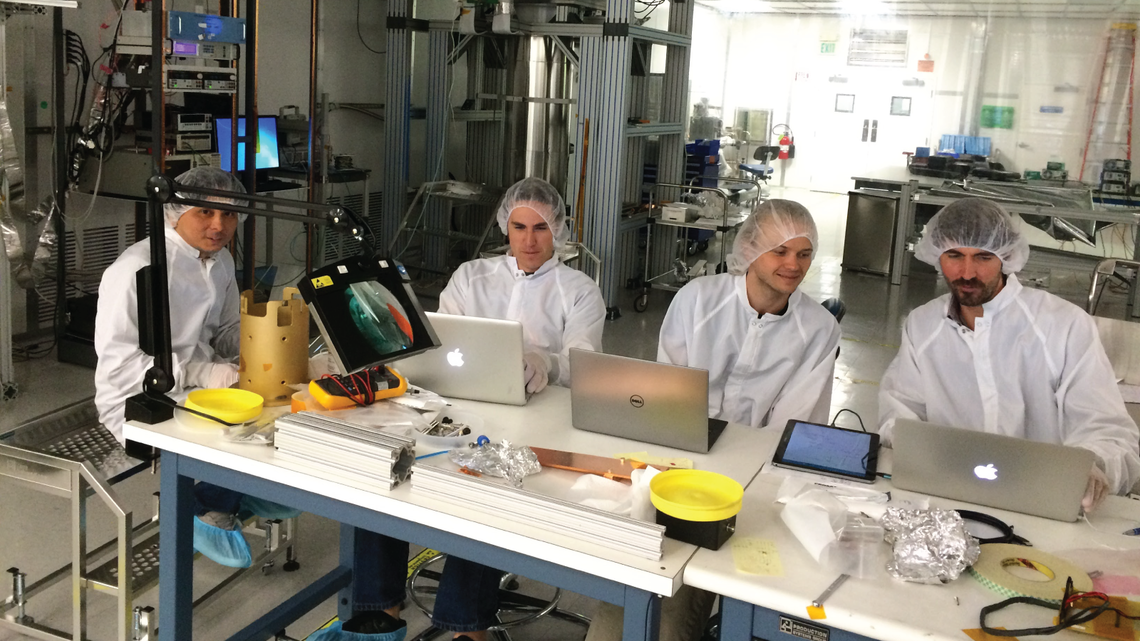 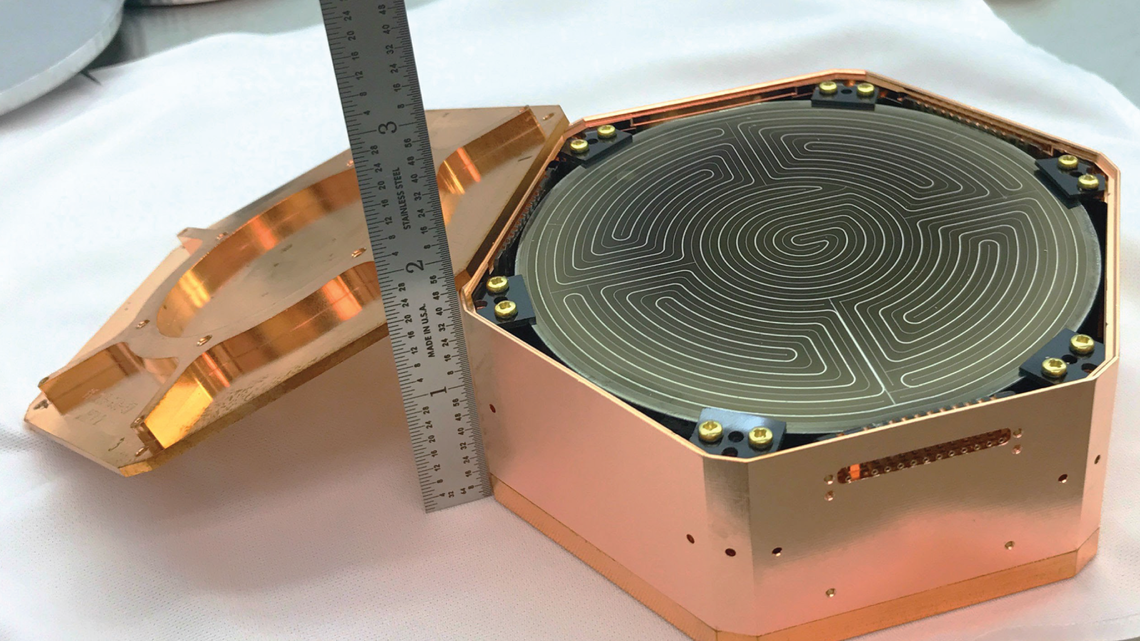 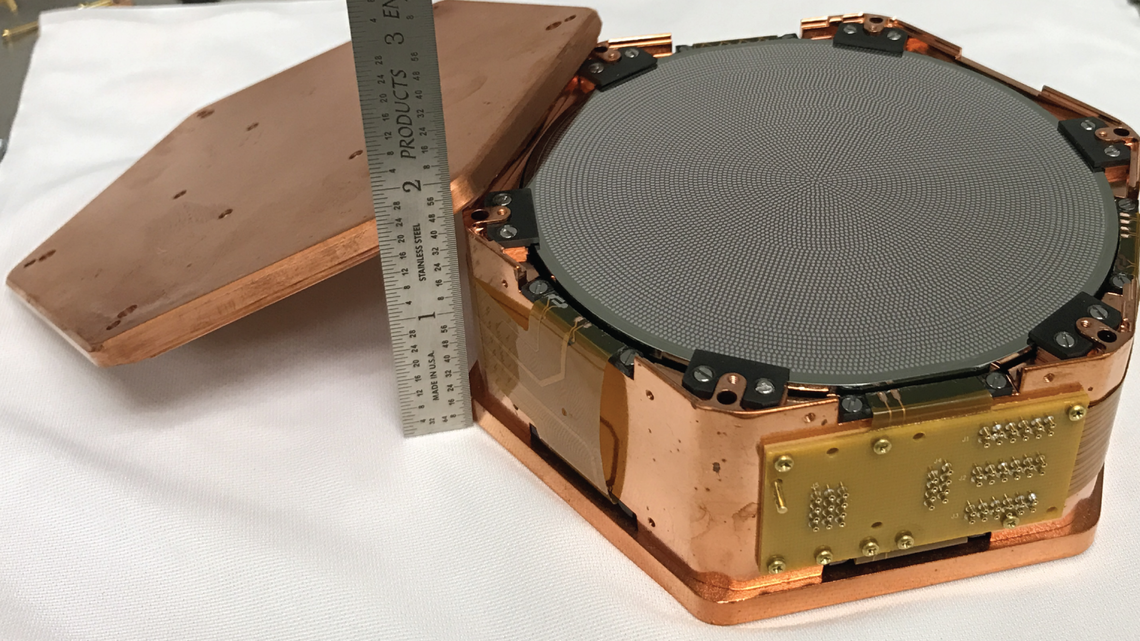 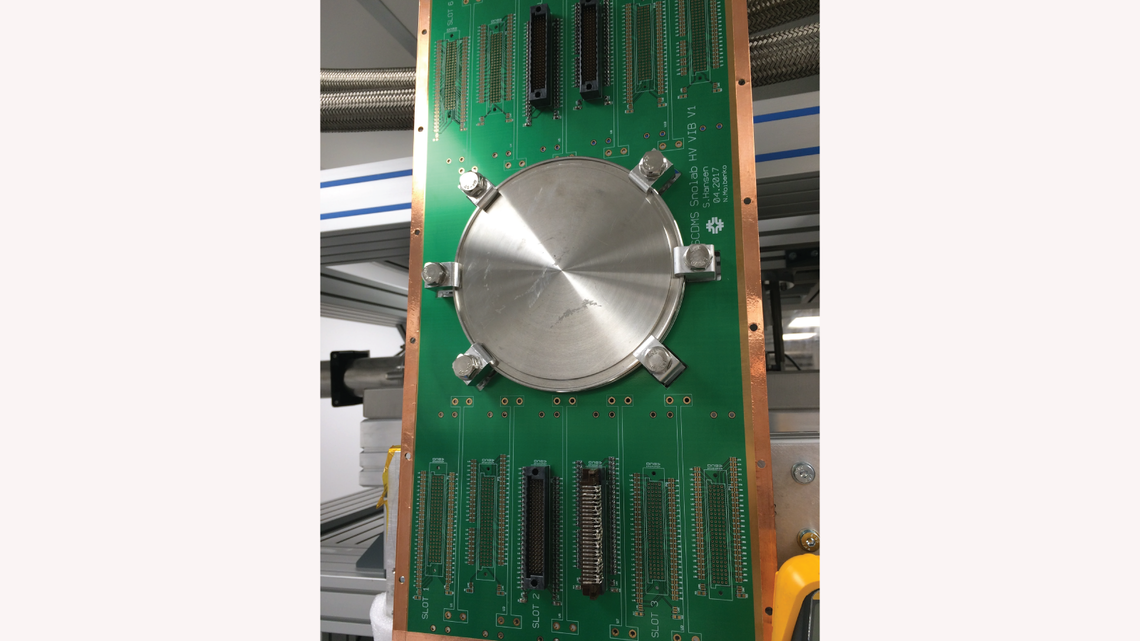 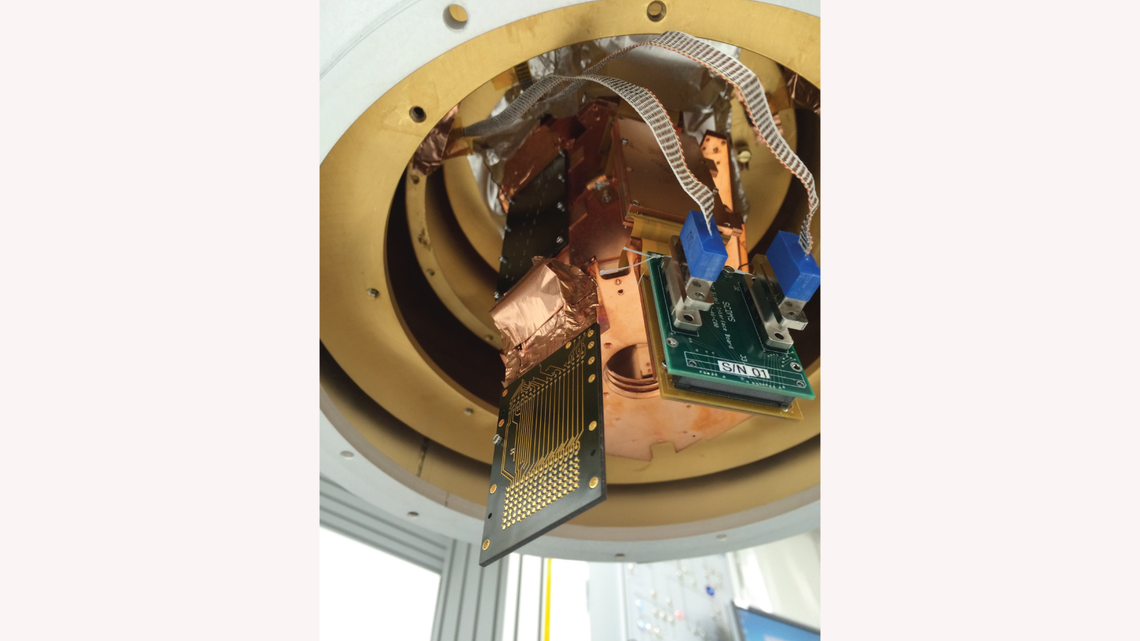 A SNOLAB Engineering Tower is installed in the dilution fridge to test cryogenic flex-cable readout configurations.

The work under way at SLAC serves as a system test for the future SuperCDMS SNOLAB experiment. Researchers are testing the four different detector types, the way they are integrated into towers, their superconducting electrical connectors and the refrigerator unit that cools them down to a temperature of almost absolute zero.

“These tests are absolutely crucial to verify the design of these new detectors before they are integrated in the experiment underground at SNOLAB,” says Ken Fouts, project manager for SuperCDMS SNOLAB at SLAC. “They will prepare us for a critical DOE review next year, which will determine whether the project can move forward as planned.” DOE is expected to cover about half of the project costs, with the other half coming from NSF and a contribution from the Canadian Foundation for Innovation.

Important work is progressing at all partner labs of the SuperCDMS SNOLAB project. Fermi National Accelerator Laboratory is responsible for the cryogenics infrastructure and the detector shielding—both will enable searching for faint WIMP signals in an environment dominated by much stronger unwanted background signals. Pacific Northwest National Laboratory will lend its expertise in understanding background noise in highly sensitive precision experiments. A number of US universities are involved in various aspects of the project, including detector fabrication, tests, data analysis and simulation.

The project also benefits from international partnerships with institutions in Canada, France, the UK and India. The Canadian partners are leading the development of the experiment’s data acquisition and will provide the infrastructure at SNOLAB.

“Strong partnerships create a lot of synergy and make sure that we’ll get the best scientific value out of the project,” says Fermilab’s Dan Bauer, spokesperson of the SuperCDMS collaboration, which consists of 109 scientists from 22 institutions, including numerous universities. “Universities have lots of creative students and principal investigators, and their talents are combined with the expertise of scientists and engineers at the national labs, who are used to successfully manage and build large projects.”

SuperCDMS SNOLAB will be the fourth generation of experiments, following CDMS-I at Stanford, CDMS-II at the Soudan mine in Minnesota, and a first version of SuperCDMS at Soudan, which completed operations in 2015.

“Over the past 20 years we’ve been pushing the limits of our detectors to make them more and more sensitive for our search for dark matter particles,” says KIPAC’s Blas Cabrera, project director of SuperCDMS SNOLAB. “Understanding what constitutes dark matter is as fundamental and important today as it was when we started, because without dark matter none of the known structures in the universe would exist—no galaxies, no solar systems, no planets and no life itself.”