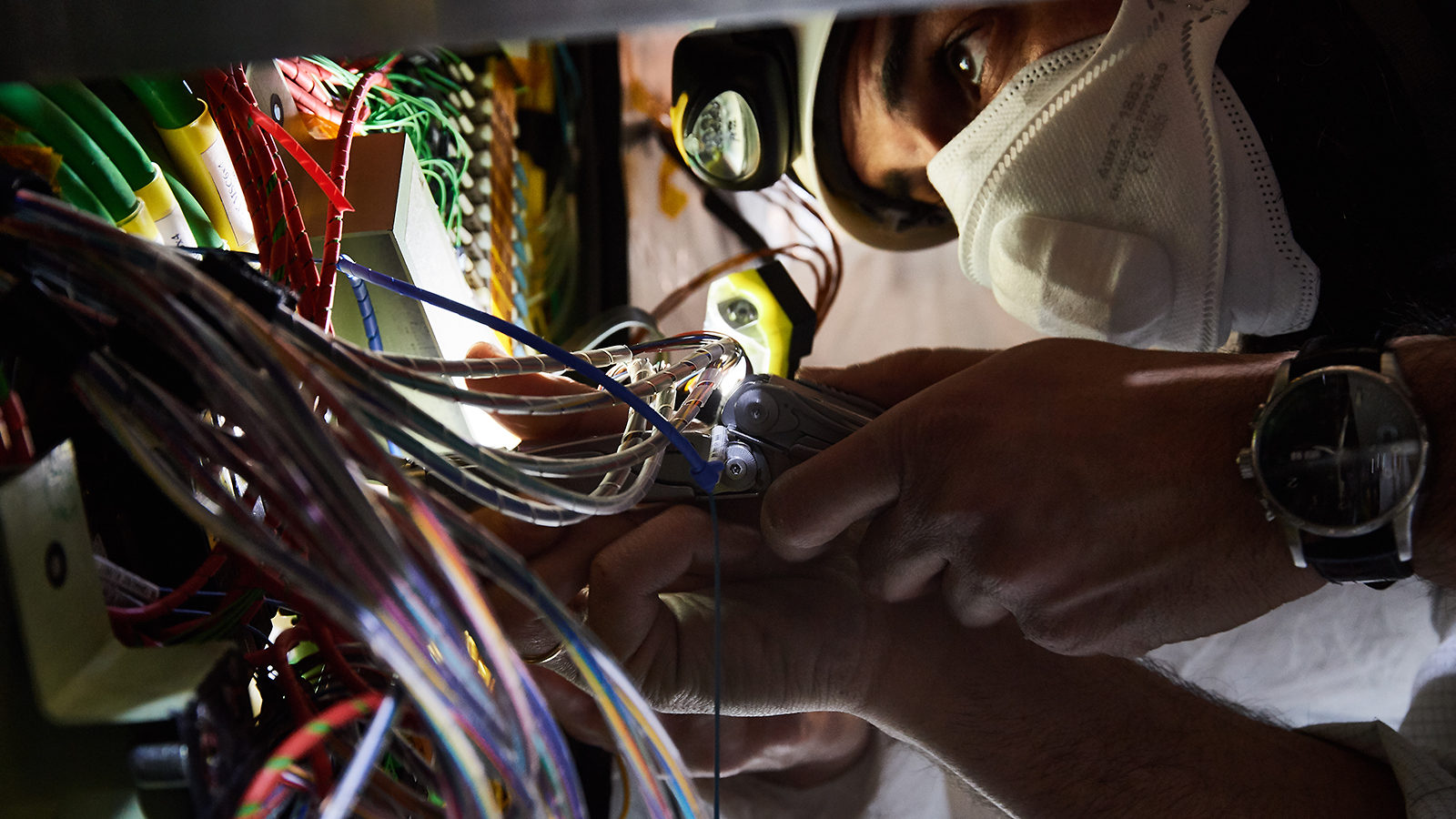 Sometimes big questions require big tools. That’s why a global community of scientists designed and built gigantic detectors to monitor the high-energy particle collisions generated by CERN’s Large Hadron Collider in Geneva, Switzerland. From these collisions, scientists can retrace the footsteps of the Big Bang and search for new properties of nature.

The CMS experiment is one such detector. In 2012, it co-discovered the elusive Higgs boson with its sister experiment, ATLAS. Now, scientists want CMS to push beyond the known laws of physics and search for new phenomena that could help answer fundamental questions about our universe. But to do this, the CMS detector needed an upgrade.

“Just like any other electronic device, over time parts of our detector wear down,” says Steve Nahn, a researcher in the US Department of Energy’s Fermi National Accelerator Laboratory and the US project manager for the CMS detector upgrades. “We’ve been planning and designing this upgrade since shortly after our experiment first started collecting data in 2010.”

The CMS detector is built like a giant onion. It contains layers of instruments that track the trajectory, energy and momentum of particles produced in the LHC’s collisions. The vast majority of the sensors in the massive detector are packed into its center, within what is called the pixel detector. The CMS pixel detector uses sensors like those inside digital cameras but with a lightning fast shutter speed: In three dimensions, they take 40 million pictures every second.

For the last several years, scientists and engineers at Fermilab and 21 US universities have been assembling and testing a new pixel detector to replace the current one as part of the CMS upgrade, with funding provided by the Department of Energy Office of Science and National Science Foundation. 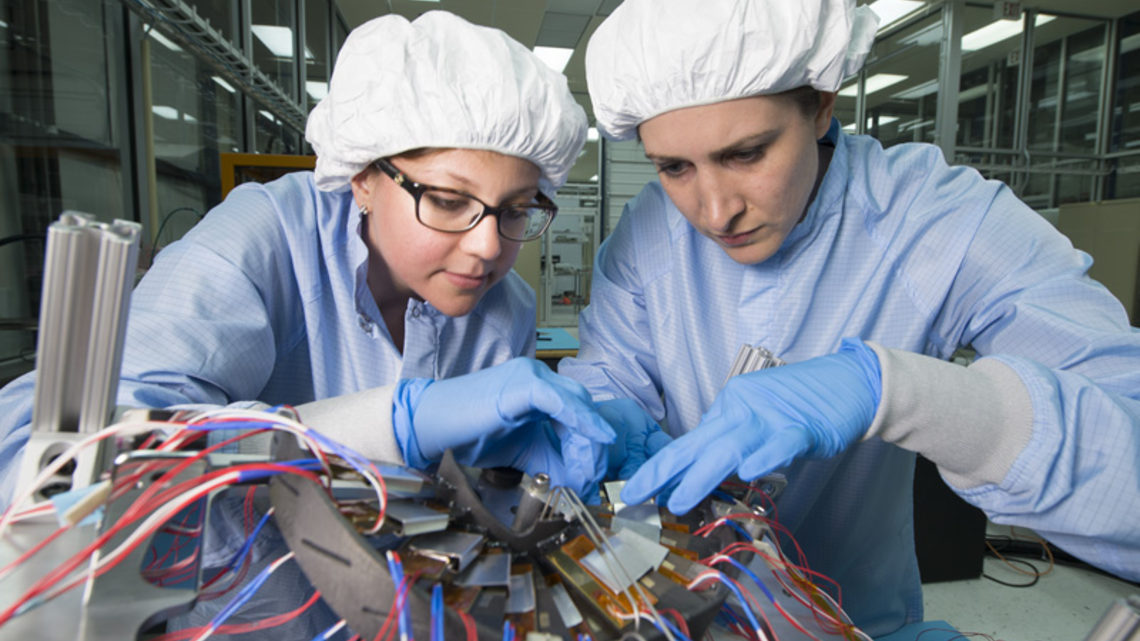 Maral Alyari of SUNY Buffalo and Stephanie Timpone of Fermilab measure the thermal properties of a forward pixel detector disk at Fermilab. Almost all of the construction and testing of the forward pixel detectors occurred in the United States before the components were shipped to CERN for installation inside the CMS detector. 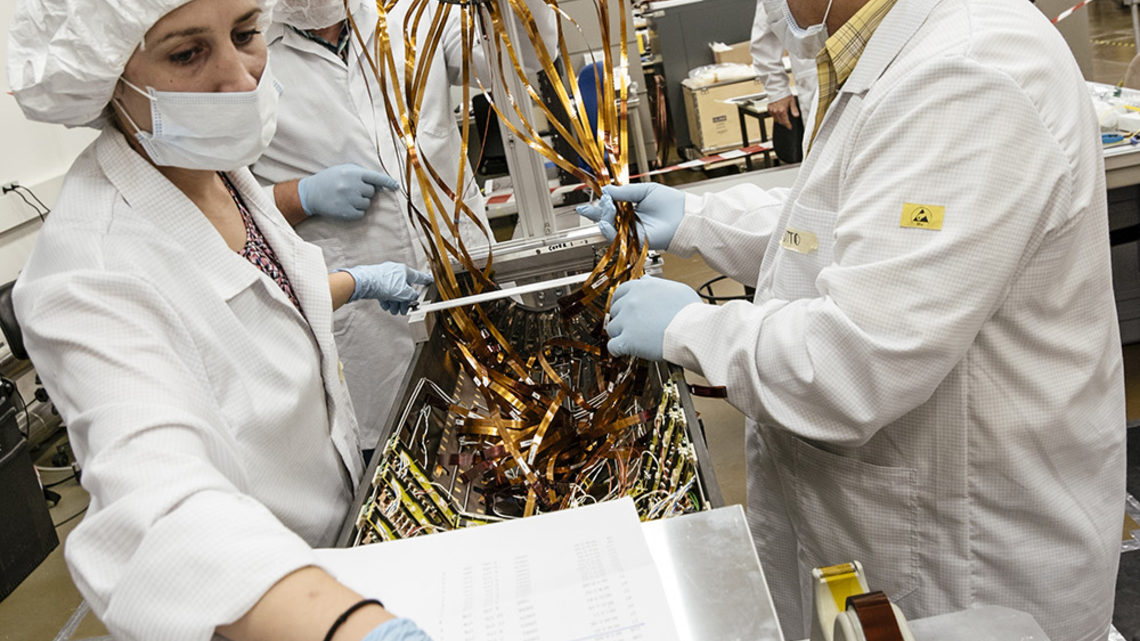 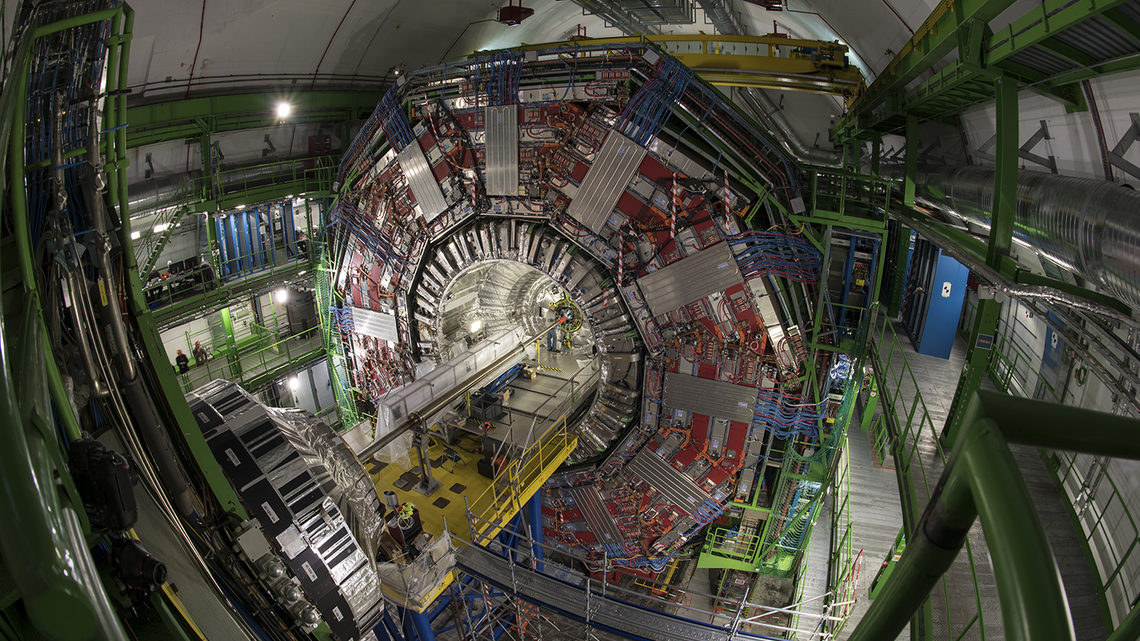 The CMS detector, located in a cavern 100 meters underground, is open for the pixel detector installation. 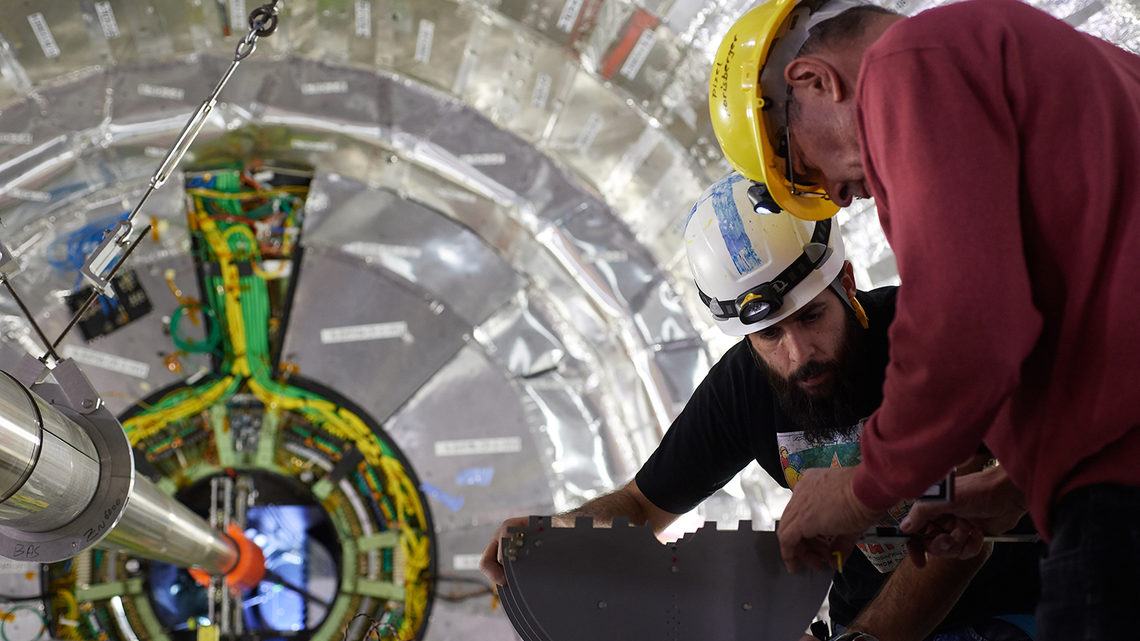 Postdoctoral researcher Stefanos Leontsinis and colleague Roland Horisberger work with a mock-up of one side of the barrel pixel detector next to the LHC’s beampipe. 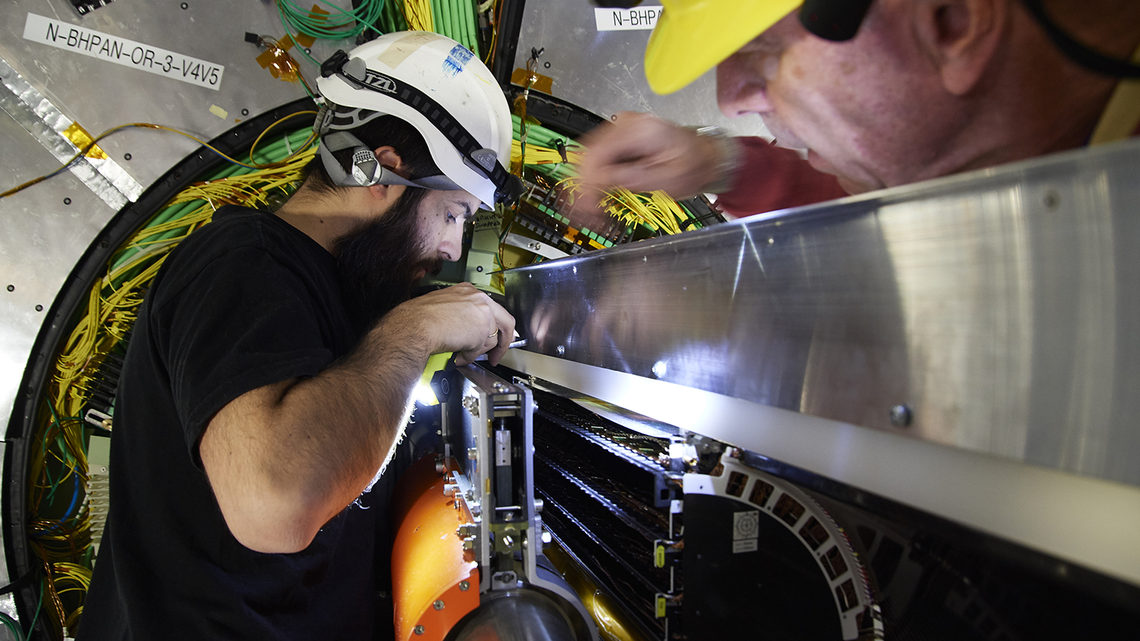 Leontsinis watches the clearance as engineers slide the first part of the barrel pixel just millimeters from the LHC’s beampipe. 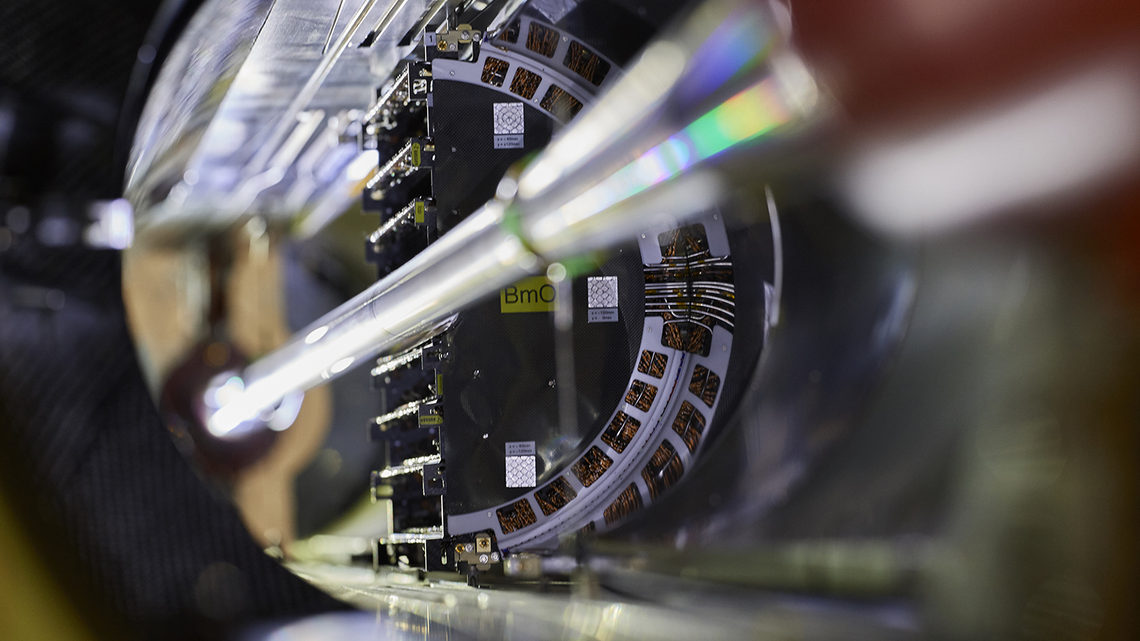 The first half-moon of the innermost part of the pixel detector, called the Barrel, or BmO, is inserted along the beam pipe. 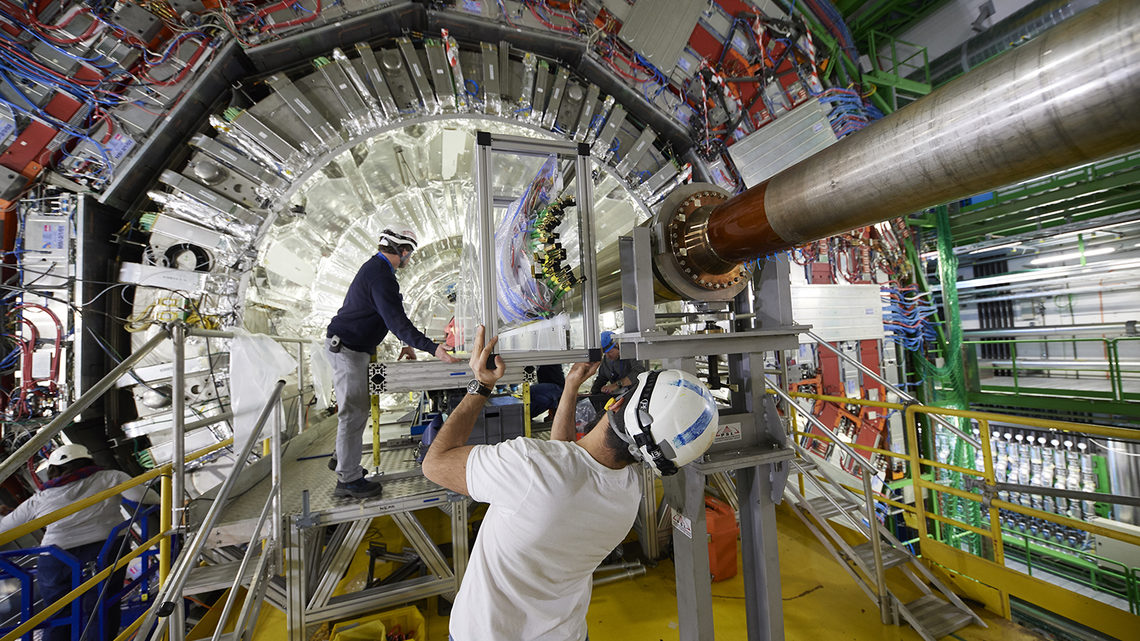 Scientists and engineers lift and guide the components by hand as they prepare to insert them into the CMS detector.
Photo by Maximilien Brice, CERN 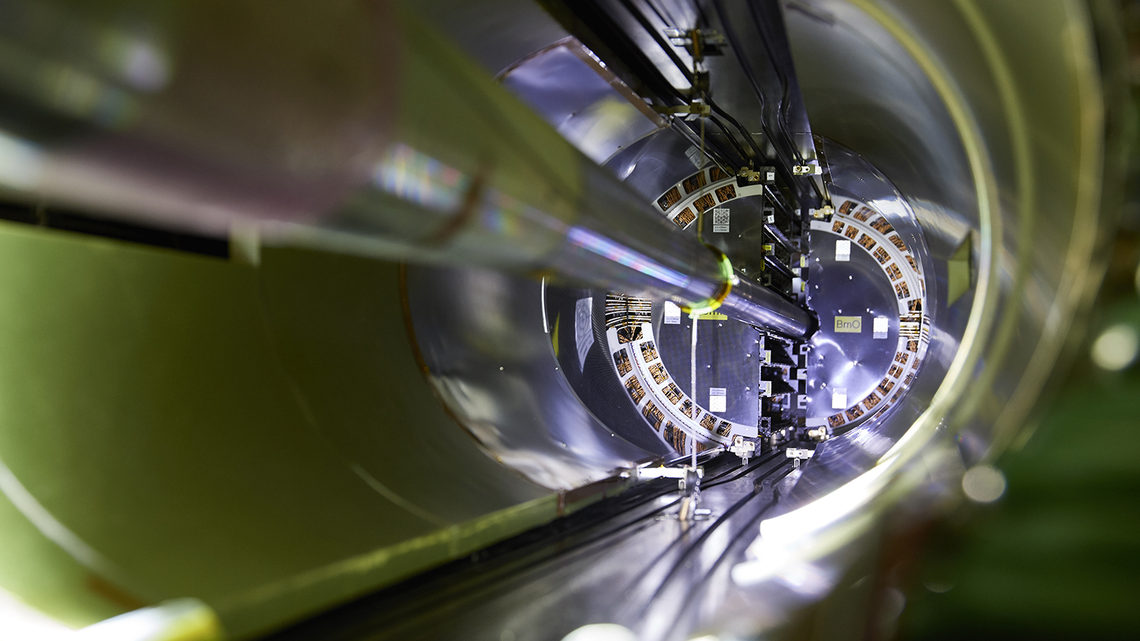 The second half-moon of the innermost barrel pixel is inserted. 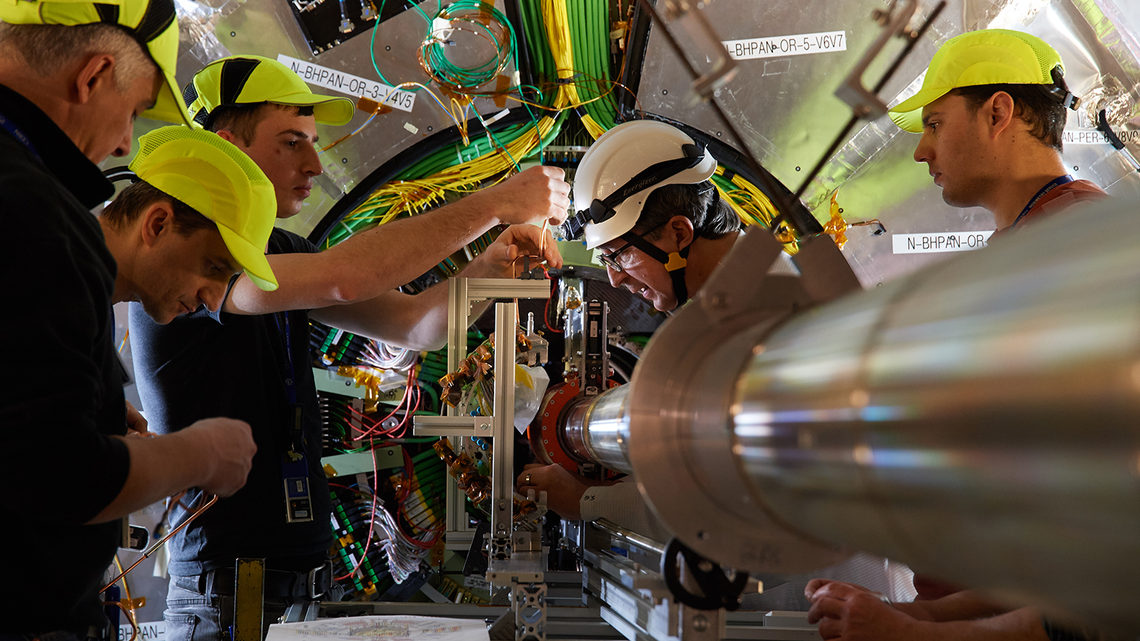 Scientists and engineers connect the cooling pipes of the forward pixel detector. The pixel detector is flushed with liquid carbon dioxide to keep the silicon sensors protected from the LHC’s high-energy collisions. 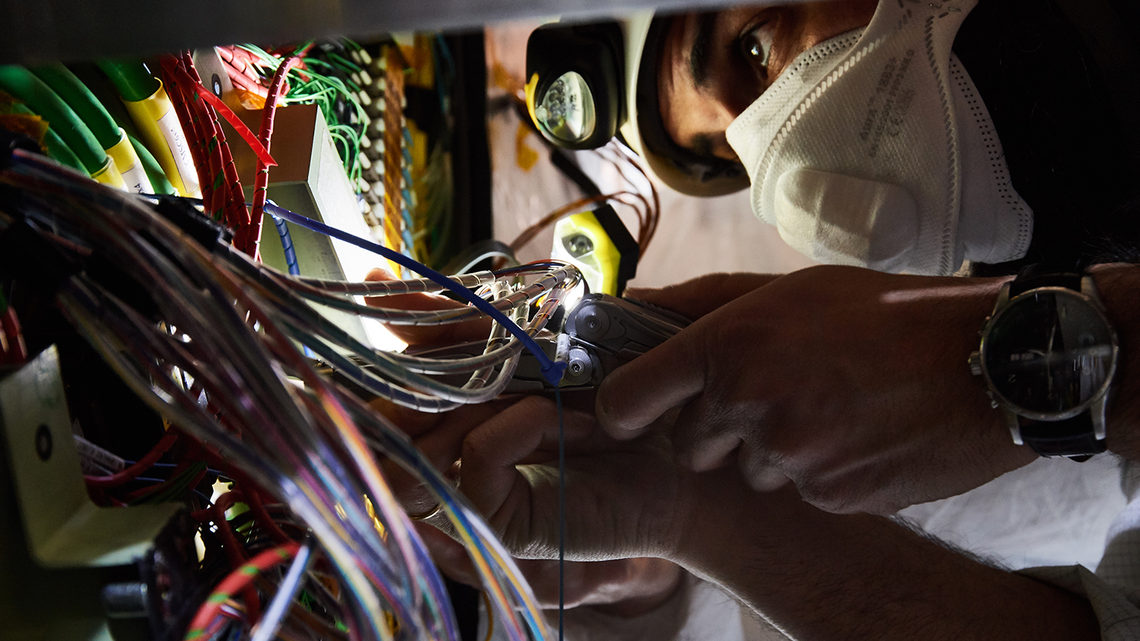 Leontsinis carefully removes cables to make room for the forward pixel. Even a single cable slightly out of place can make it impossible to cleanly insert the new forward pixel detector. 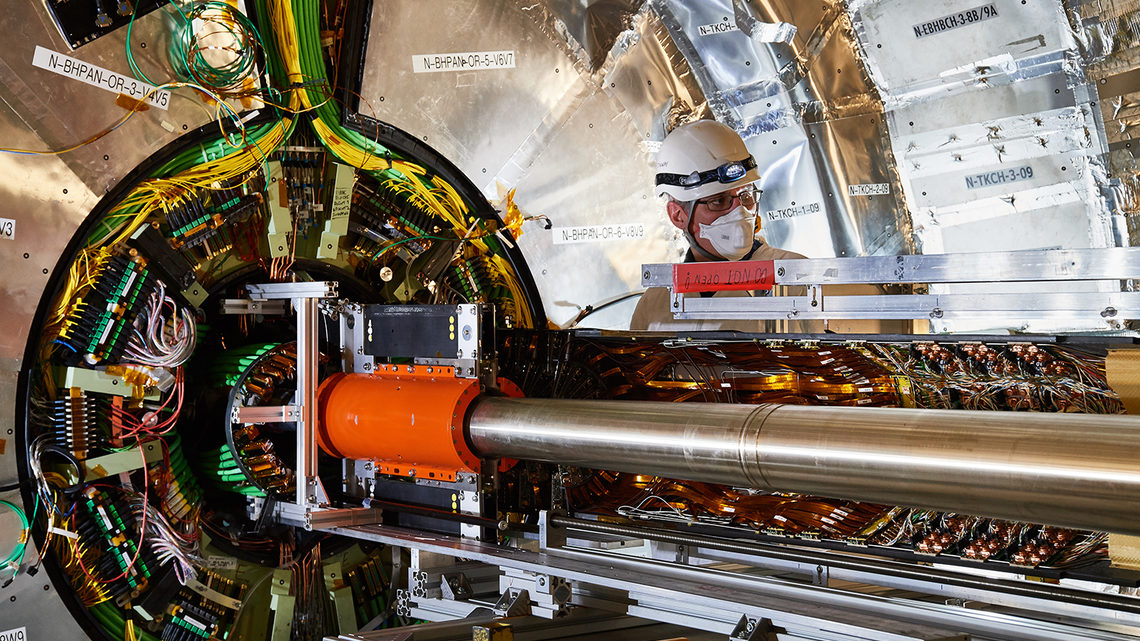 Scientist John Conway of the University of California, Davis prepares to remove the second half of the forward pixel detector from its container. 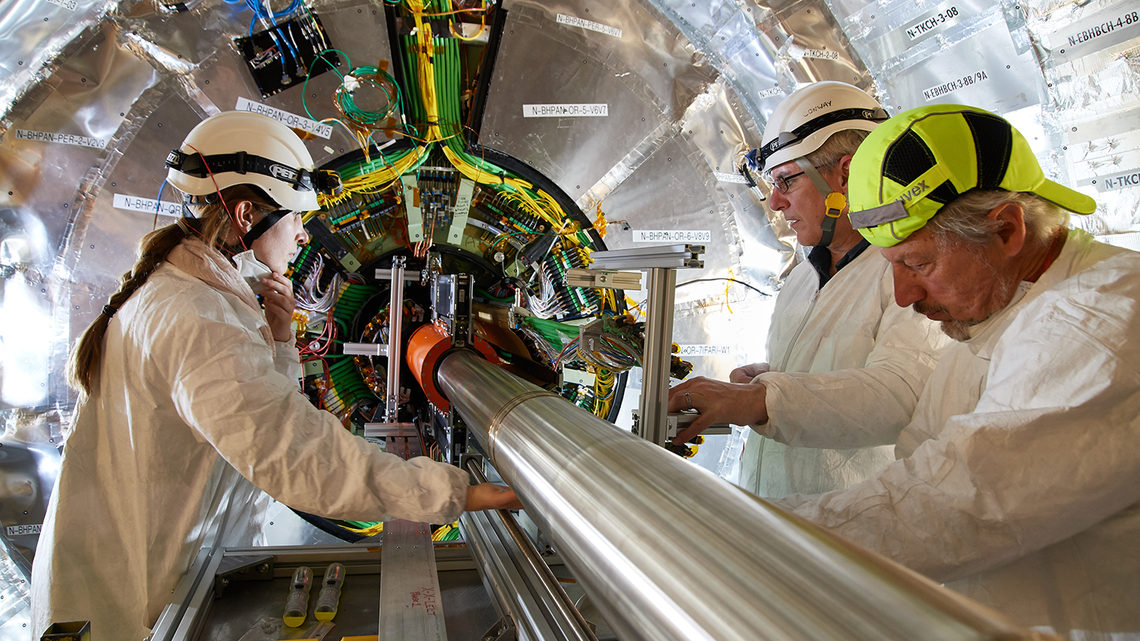 The support shell of the pixel detector is thin, hollow and light enough to lift with one hand. But because it’s so fragile, a minimum of four people were always on hand to move it.
Photo by Maximilien Brice, CERN 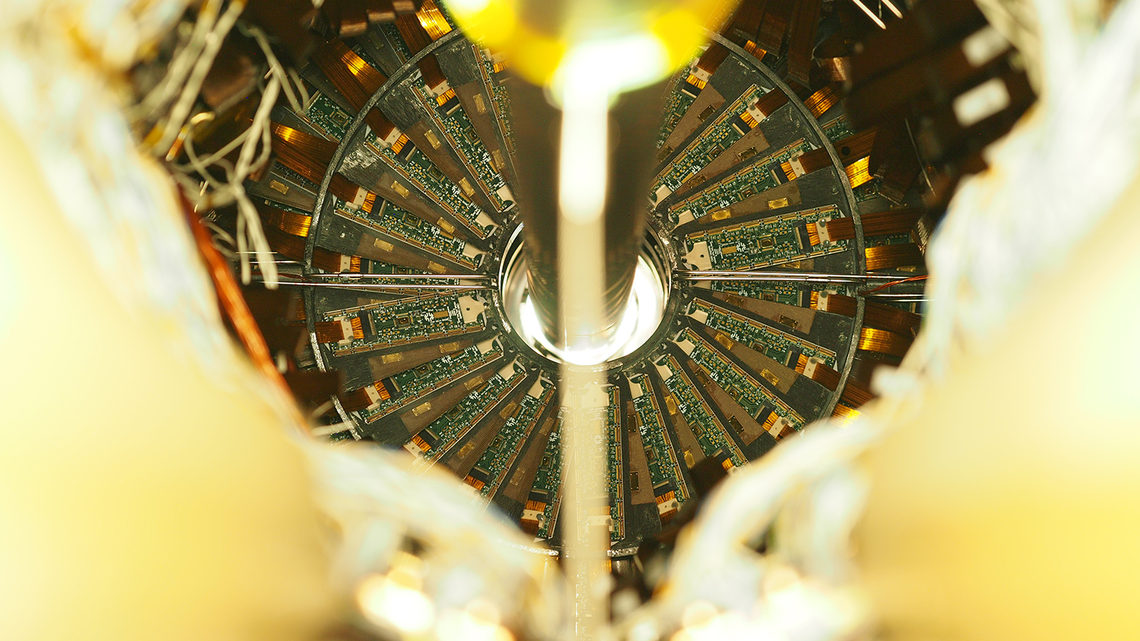 The new pixel detector, seen from beneath the beam pipe. Each green wedge is a pixel module containing 66,650 pixels and 16 read-out chips, all interconnected through delicate wiring and electronics. The flexible copper cables emanating from the pixel modules bring the data collected by the silicon sensors to the readout electronics.
Satoshi Hasegawa, Fermilab
Previous Next

The pixel detector consists of three sections: the innermost barrel section and two end caps called the forward pixel detectors. The tiered and can-like structure gives scientists a near-complete sphere of coverage around the collision point. Because the three pixel detectors fit on the beam pipe like three bulky bracelets, engineers designed each component as two half-moons, which latch together to form a ring around the beam pipe during the insertion process.

Over time, scientists have increased the rate of particle collisions at the LHC. In 2016 alone, the LHC produced about as many collisions as it had in the three years of its first run together. To be able to differentiate between dozens of simultaneous collisions, CMS needed a brand new pixel detector.

Each of the two forward pixel detectors is a mosaic of 672 silicon sensors, robust electronics and bundles of cables and optical fibers that feed electricity and instructions in and carry raw data out, according to Marco Verzocchi, a Fermilab researcher on the CMS experiment.

The multipart, 6.5-meter-long pixel detector is as delicate as raw spaghetti. Installing the new components into a gap the size of a manhole required more than just finesse. It required months of planning and extreme coordination.

“We practiced this installation on mock-ups of our detector many times,” says Greg Derylo, an engineer at Fermilab. “By the time we got to the actual installation, we knew exactly how we needed to slide this new component into the heart of CMS.”

The most difficult part was maneuvering the delicate components around the pre-existing structures inside the CMS experiment.

“In total, the full three-part pixel detector consists of six separate segments, which fit together like a three-dimensional cylindrical puzzle around the beam pipe,” says Stephanie Timpone, a Fermilab engineer. “Inserting the pieces in the right positions and right order without touching any of the pre-existing supports and protections was a well-choreographed dance.”

For engineers like Timpone and Derylo, installing the pixel detector was the last step of a six-year process. But for the scientists working on the CMS experiment, it was just the beginning.

“Now we have to make it work,” says Stefanos Leontsinis, a postdoctoral researcher at the University of Colorado, Boulder. “We’ll spend the next several weeks testing the components and preparing for the LHC restart.”