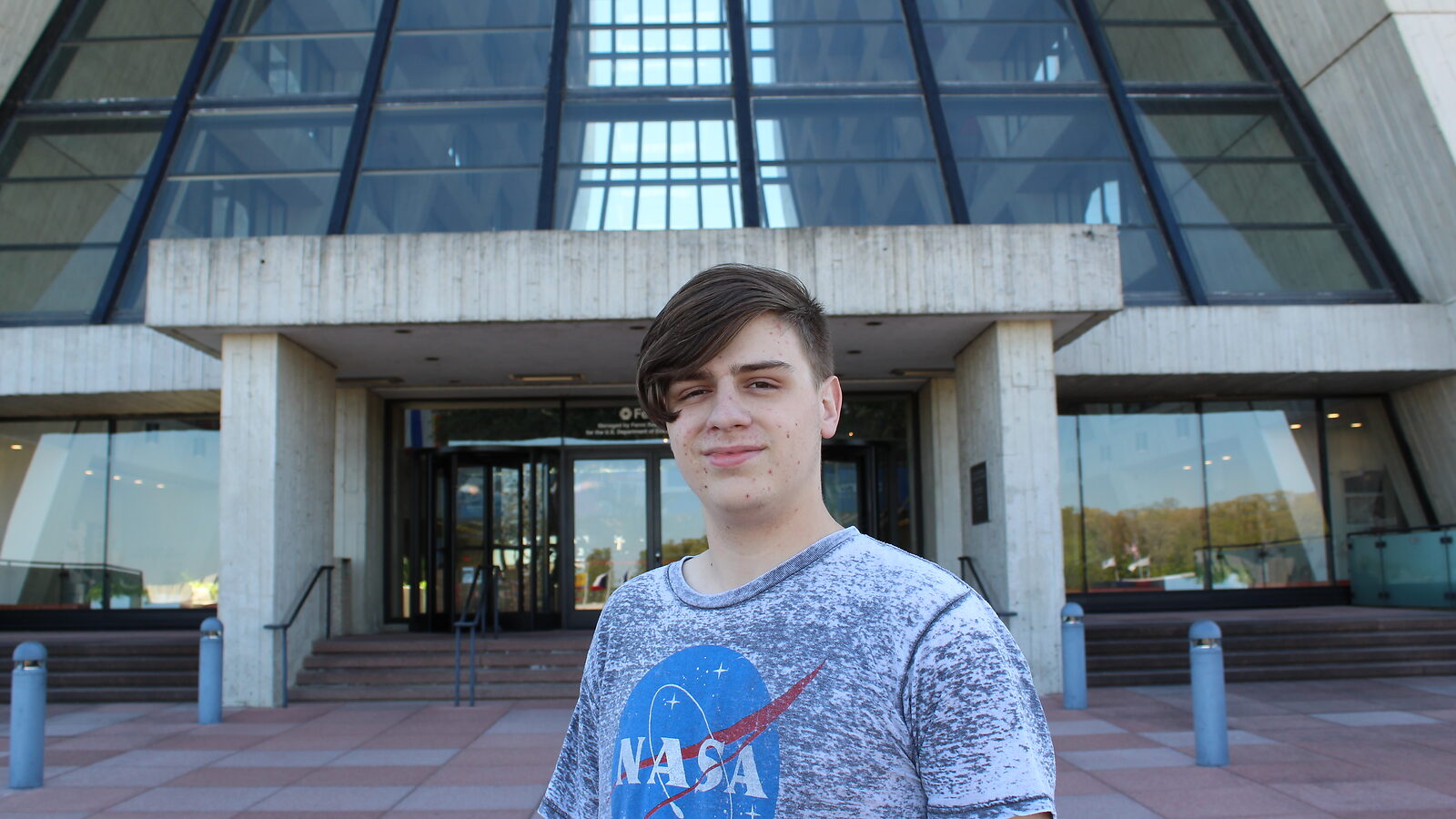 Steve Tammes was one of those kids who ask a lot of questions. His grandfather Terry Butler would always try his best to answer.

“He liked to sit and talk about the stars and the moon, and that kind of stuff,” Butler says.

The two of them would page through encyclopedias together, searching for the answers to Tammes’ questions about the universe.

In between the Q&A sessions, Butler told Tammes stories from his 40-year career as a contractor, which spanned commercial projects at institutions all over the Chicagoland area, including Argonne National Laboratory and Naval Station Great Lakes.

None of those stories captured young Tammes’ imagination more than the ones about the US Department of Energy’s Fermi National Accelerator Laboratory, located just 15 miles away from his home in Elgin, Illinois. Butler worked on projects on-site at what was called the National Accelerator Laboratory in 1972 and 1973 (before “Fermi” was added to the name in honor of physicist Enrico Fermi).

Ultimately, Tammes’ fascination would shape his education and eventual decision to pursue physics research at the University of Iowa, where he is now a senior. 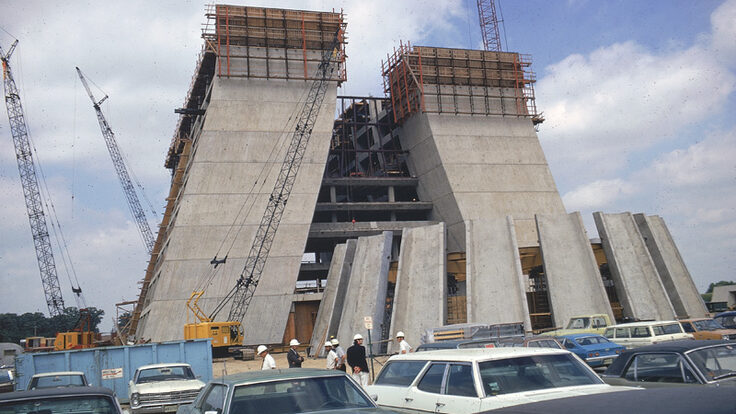 Construction on Wilson Hall took place between 1971 and 1974. This photo was taken circa 1973, around the time Terry Butler worked on the building as a contractor. 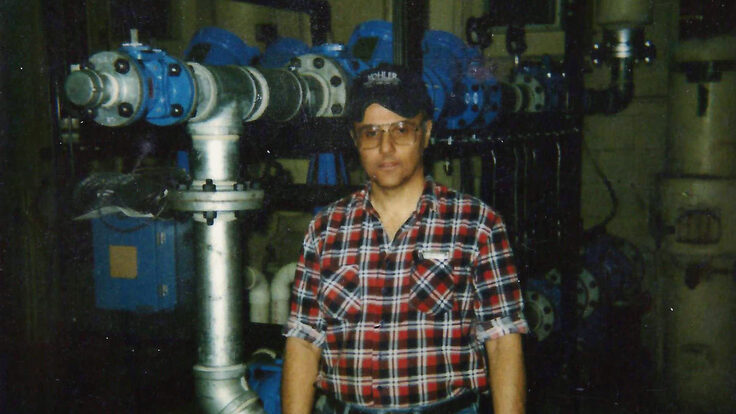 Terry Butler worked on HVAC in commercial and government buildings all over the Chicago area, including Fermilab’s iconic Wilson Hall.

For Tammes, stories about his grandfather’s time at Fermilab took on an almost mythological quality. Recounting his favorite tales, Tammes talks about his grandfather “welding the sides of old battleships to be smashed by particles” and having lively conversations with the physicists with their blackboards full of equations.

Professional welders did indeed convert battleship armor plating into shielding for the accelerator at Fermilab—steel from before World War II was known for its low levels of experiment-disrupting radioactivity.

But Butler wasn’t the one doing the welding. In truth, Butler says, his job at Fermilab was to install HVAC in the 16-story building-in-progress that would become the nerve center of the lab, Wilson Hall.

At the time, Butler says, he had only a vague idea of the purpose of the structures he was helping to build at Fermilab and Argonne. “We worked on mechanical things, putting the heat in buildings and doing the air conditioning,” he says. “We never really knew much about what kind of buildings we were working on.”

Sometimes, Butler would strike up a conversation with one of the physicists, but those occasions were fairly rare, he says.

Regardless, Butler managed to piece together a decent understanding of what was going on in the accelerators: particles “zipping around a ring at super high speed” before smashing into a target to break them into new particles that would then be “photographed at close to absolute zero” in bubble chambers filled with liquid hydrogen.

The way Tammes remembers his grandfather’s tales might have gotten a little muddled, but they captured his imagination enough that when his high school physics teacher mentioned a program for students at Fermilab, he signed up.

Tammes enrolled in the winter 2016 cohort of Fermilab’s Saturday Morning Physics program. Every Saturday for 10 weeks, he’d commute 30 minutes to the lab (after a reminder from his mother to drive carefully on the icy roads).

There, in a conference room in Wilson Hall with a few dozen other teens, warmed by the heating system his grandfather had helped install, he’d listen to some of the lab’s scientists talking about modern physics topics like quantum mechanics and how a particle accelerator works.

Saturday Morning Physics began at Fermilab in 1980 under the direction of Laboratory Director Leon Lederman, with a mission to increase young people’s enthusiasm for science. Other institutions across the US and as far away as Germany have since started similar programs, some aimed solely at students, others open to the general public.

Whereas Tammes’ high school AP physics class was mostly “sliding rocks around with math” to learn about forces and motion, he says, Saturday mornings at Fermilab “brought the idea of physics from applied mathematics to understanding the universe.” (He says his favorite lecture was theorist Nick Gnedin’s talk on relativity.)

After lectures, the students broke up into small groups for tours of the facilities. Each week offered a peek into a different corner of Fermilab: the linear accelerator, the DZero detector, the Muon g-2 experiment, the Grid Computing Center and more.

Saturday Morning Physics was the first time Tammes had seen the inner workings of the lab. He says it was “almost like love at first sight.”

“The scale of the experiments really blew my mind,” he says. Seeing the facility where scientists were working on a powerful beam of ghostly neutrinos that would travel straight through the Earth to South Dakota as part of the Deep Underground Neutrino Experiment, he remembers thinking, “Oh my god, they’re going to shoot particles two states away!”

The Saturday Morning Physics tours banished any doubt in Tammes’ mind. He wanted to do physics research, too.

Looking to the stars, and the future

Now, Tammes’ undergraduate research focuses on developing X-ray detectors for satellite observatories to study high-energy astronomical phenomena like black holes. In November and December 2019, he visited the Advanced Photon Source at Argonne to test the detectors with an X-ray beam.

Tammes says that participating in Saturday Morning Physics and later using the facilities at Argonne for his own research feel like the continuation of a family legacy.

He doesn’t know exactly what the rest of his career will bring—just that he wants to keep doing research. No matter where he winds up, as long as he’s doing science he loves, he knows he’s making his grandfather proud.

“He inspired science in me,” Tammes says, “so I’m inspired to do science for him.”