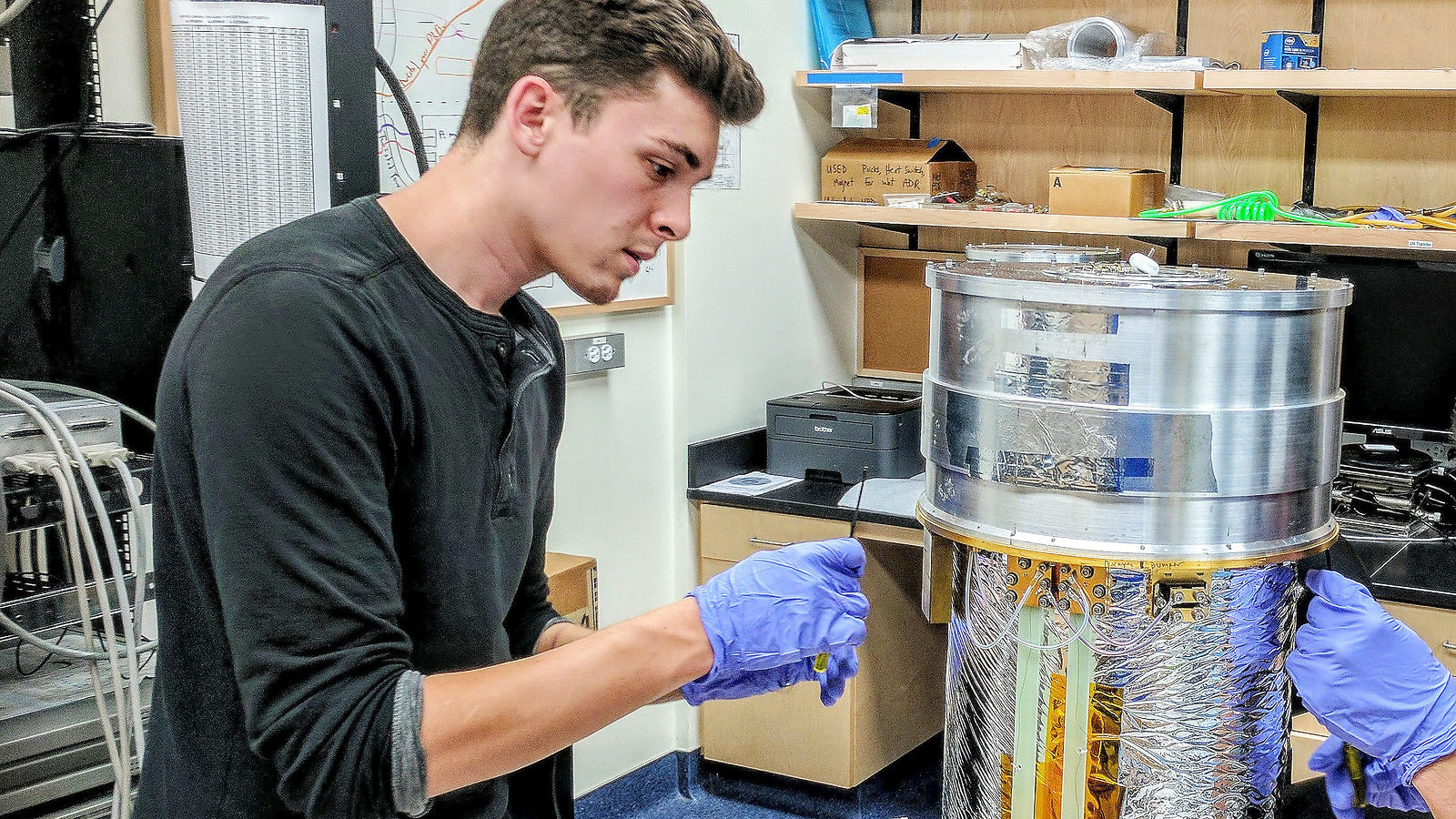 When he was growing up, Jonathan LeyVa thought he’d follow his passion for race cars and pick a profession in automotive engineering. Instead he’s working on what will become one of the world’s most sensitive searches for dark matter, the invisible substance that accounts for more than 85% of the mass of the universe.

LeyVa works in a clean room at the Department of Energy’s SLAC National Accelerator Laboratory, where crews are building detectors for the latest in a series of Super Cryogenic Dark Matter Search, or SuperCDMS, experiments. As an early-career physicist, part of his job is keeping track of how much exposure to cosmic rays—high-energy particles falling in from space—the detector components are getting. Researchers want to keep that exposure to a minimum because it could harm their ability to detect dark matter later on.

“I’ve been interested in cosmology since my senior year in college,” LeyVa says, “so I’m lucky enough to be able to contribute to an exciting project like this at the frontline of dark matter research.”

Getting into dark matter physics

As a freshman at Santa Clara University, LeyVa started out in mechanical engineering, following his childhood dream of doing something with cars. But he soon realized that the field wasn’t for him. Inspired by his dad, who holds a physics degree, and by his physics professor at Santa Clara, he began studying physics during his sophomore year.

“Having been committed to engineering at first, making this switch was quite daunting,” LeyVa says. But he quickly got into the physics world and completed his undergraduate studies in 2017.

Around the time of his graduation, Santa Clara Professor Betty Young suggested that LeyVa spend some time in Kent Irwin’s lab at Stanford University, where Young is a visiting scholar. There he learned about SQUIDs—superconducting quantum interference devices used in precision sensors, including those for dark matter searches with SuperCDMS.

This experience got LeyVa hooked on dark matter, whose nature is still unknown and one of the biggest mysteries of modern physics.

He spent the following year with Blas Cabrera’s team at Stanford, looking for ways of making future SuperCDMS detectors more sensitive to lightweight dark matter particles. In 2018 he became a member of the SuperCDMS group at SLAC’s and Stanford’s Kavli Institute for Particle Astrophysics and Cosmology, which is building detector towers for the current version of the experiment; it’s scheduled to begin its hunt for dark matter at the Canadian underground lab SNOLAB in the early 2020s.

Nowadays, LeyVa spends a lot of his time in a clean room at SLAC, supporting the SuperCDMS team in assembling the detector towers.

SuperCDMS SNOLAB will initially have four towers, each containing a stack of six silicon and germanium crystals and a bunch of sensitive electronics. Cooled down to almost absolute zero temperature, the crystals will vibrate ever so slightly if a dark matter particle rushes through them, and it’s these tiny vibrations that the experiment will be looking for.

A major challenge in building the experiment is that the crystals and other detector components are sensitive to particle showers produced when cosmic rays hit the atmosphere. These showers cause unwanted background signals that could make it hard to pick up potential dark matter signals. That’s why the experiment at SNOLAB will operate 6800 feet underground, where it’s protected from those effects.

It also means that the SuperCDMS team must limit how much detector components are exposed to cosmic rays during the construction of the experiment. Components for the detector towers, for example, are kept three stories underground in a tunnel at Stanford, where they are relatively protected. For the tower assembly and testing, they are brought to SLAC, but each tower can spend only a total of a week at the surface. LeyVa is like a cosmic-ray bookkeeper, closely tracking and logging the number of hours that crystals and hundreds of other detector components are being handled at the lab. Working closely with the team’s software developers, he’s maintaining and improving the database for that task.

In addition, he’s involved in a number of other parts of the project, including noise studies of the system that will collect SuperCDMS data and R&D for future generations of the experiment.

Born to fiddle with things

Working on SuperCDMS is just the type of hands-on experience LeyVa enjoys. He loves to experiment—at work and in his spare time. “It seems that I have too many hobbies for my own good,” he says jokingly.

In college, LeyVa volunteered on film crews, which involved him in videography, lighting and acting for several productions. As a media systems technician at his university he set up large-scale sound and video systems for important events. One of the most memorable ones, he says, was a talk by actor Martin Sheen.

“Sheen talked about social justice and activism, and I remember his presence created quite a buzz at SCU,” he says. “I grew up seeing him in some of my favorite movies. He seemed to be a very warm, kind person.”

LeyVa is also into photography—an interest that was sparked by his parents. “In the early 2000s up to about 2010-ish both my parents ran an advertising agency, taking jobs from some Silicon Valley tech companies. My dad would do photography and my mom would do editing work and graphic design,” he says. “My parents and my activities in college were influences that may have inspired me to fiddle with ‘instruments’ in more depth.”

In SLAC’s clean room he continues to find inspiration. SuperCDMS allows him to work on many sides of the project’s science and technology, which he considers to be a great learning experience.

Right now, LeyVa’s planning his next steps in life, such as going to grad school. “Particle physics with an emphasis on cosmology and astrophysics is what interests me the most, so becoming involved in cutting-edge cosmological research has been a dream come true for me,” he says. “It’s motivating me to take it to the next level and follow in the footsteps of the great researchers I’m working with.”

Editor's note: This article is adapted from an article originally published by SLAC National Accelerator Laboratory.