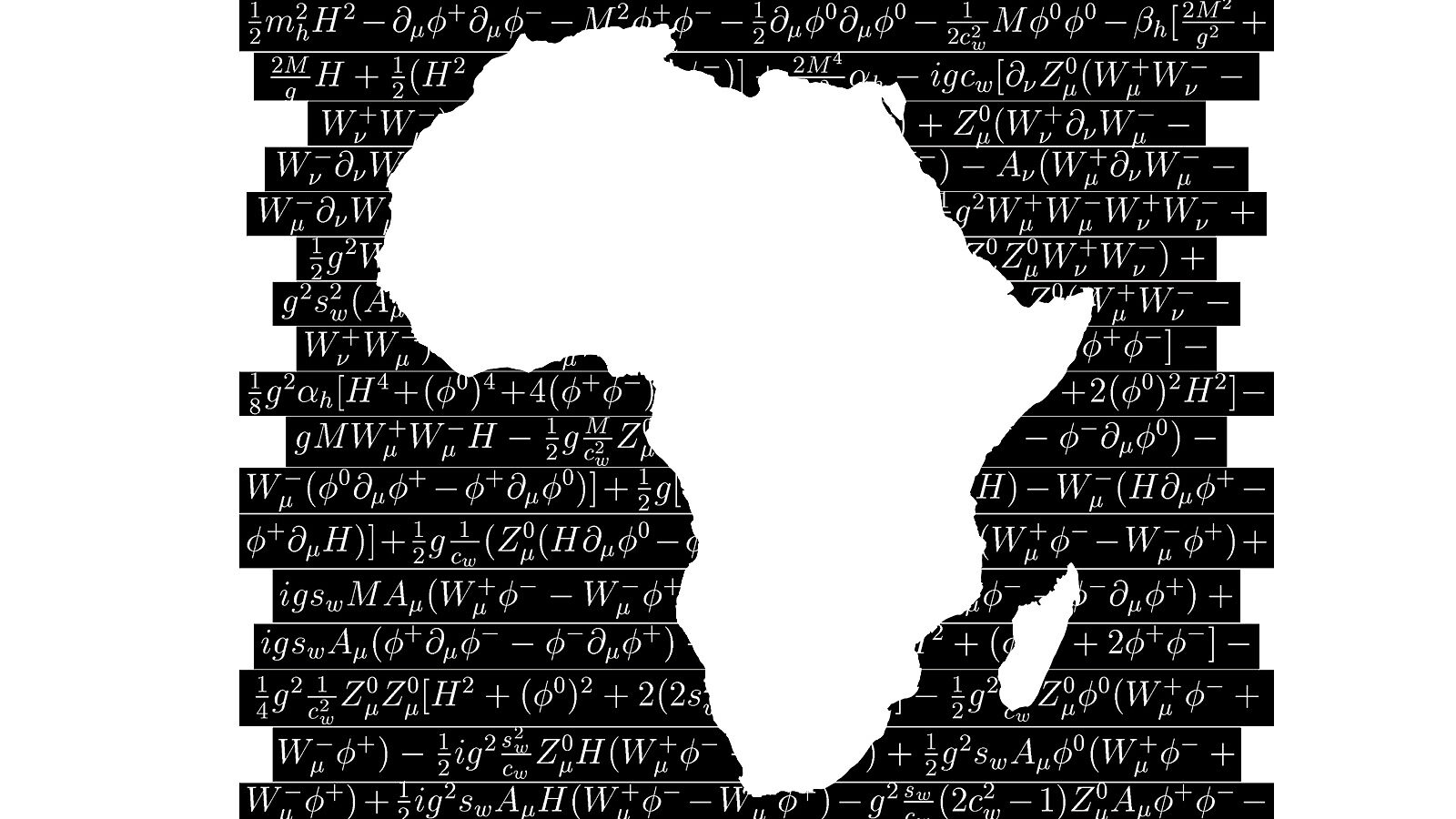 Faïrouz Malek says that after she earned her doctorate in nuclear and particle physics at the University of Grenoble in 1990, she “had only one idea: to go back home” to Algeria.

But then, a little over a year later, a coup in her country kicked off a civil war that did not end until February 2002.

Malek is now a senior scientist and research director at CNRS, the French National Center for Scientific Research. She says the war kept her away from Algeria for so long that it eventually felt too late to return. “I have my life. I have my family. I have my work,” she says.

African researchers around the world have their own stories about the paths they have taken through academia and research. Like Malek, many of them want to ensure that the next generations of researchers find themselves with more options to stay in or return to Africa.

For that reason and others, a large group of physicists and other researchers in Africa and the African diaspora have come together to develop a grassroots plan for the future of African physics.

“This is a vision and a dream.”

Physicists in regions such as Europe and Latin America and in countries such as the United States, Japan, India and China have conducted or are conducting similar planning processes to prepare for the future of physics research.

“The [African Strategy for Fundamental and Applied Physics] has a vision that Africa is an ideal location for global research infrastructure,” reads the preamble of the strategy’s founding document. “This is a vision and a dream, and even if it’s not immediately realisable, it is very important for Africa as a continent to seriously consider its commitment to this option. It is equally important that the rest of the world also seriously consider this option.”

By the end of 2022, the group aims to submit its final recommendations—endorsed by an international advisory committee—to the African Physical Society Executive Committee, African Academy of Sciences and other stakeholders.

Africa is far from a monolith. The continent includes 56 sovereign states, 54 of which are members of the African Union and the United Nations. The approximately 1.3 billion residents speak as many as 2000 languages. The population of the continent is expanding more rapidly than any other region of the world.

The African Union and African Academy of Sciences have developed top-down strategies for the continent. But until recently, physicists from throughout Africa and the diaspora have not come together to create a grassroots regional plan like this one.

This was highlighted when Malek attended a meeting in Granada as part of the process to update the European Strategy for Particle Physics.

Also at the meeting was Kétévi Adiklè Assamagan, an experimental particle physicist at the US Department of Energy’s Brookhaven National Laboratory and a Fellow of the African Academy of Sciences. Assamagan, who was born in Gabon and raised in Togo, is also involved in the future planning process for US particle physics, called Snowmass.

As part of the meeting, scientists contributed papers and were called to talk about the strategies for the future of physics in different regions and countries. “Because resources are scarce, it is important for the world community of particle physics and funding agencies to come together and define a concerted strategy,” Malek and Assamagan later wrote about the symposium in a letter to the African Physics Newsletter.

The two wrote the letter because they noticed something about the international input that was being requested: “No one was invited from Africa to say ‘What is your strategy? How can we fit or how can you fit in our strategy?’” Malek says.

Malek and Assamagan discussed the situation.

“Particle physics draws on worldwide efforts with a small yet steadily increasing presence of developing countries from Asia, South America and Africa,” they wrote. “While we can be proud of African countries such as Morocco, Egypt and South Africa gaining footholds in international projects at the Large Hadron Collider, the cooperation between African countries and the rest of the world is not well developed… Indeed, from the institutional representations at the symposium, it was evident, yet again, that in many areas of fundamental and applied research, Africa was missing.”

Malek and Assamagan joined with professors Simon Henry Connell at the University of Johannesburg, Farida Fassi at Mohammed V University in Morocco, and Shaaban Khalil at the Center for Fundamental Physics in Egypt to create a steering committee for the African Strategy for Fundamental and Applied Physics.

In late 2020, they launched the effort with a founding document, the formation of an international advisory committee, and the formation of working groups on physics topics (such as accelerators and particle physics) and areas of engagement (such as community engagement and women in physics).

Researchers are working to identify key ideas and resources needed to build a bright future for physics in Africa—a future where researchers have the resources they need in their home countries or other areas of the continent, if they so choose.

Chilufya Mwewa, a Zambian-born experimental particle physicist and a research associate at Brookhaven National Laboratory who is currently conducting research at CERN, joined the process as a convener for the African Strategy’s ethics committee. The committee is charged with maintaining, updating and disseminating a code of conduct and other guidelines for the proposal’s numerous working groups.

Mwewa says she hasn’t given much thought to the physical infrastructure she would need to be able to conduct her research in Zambia. “To be honest, because I never imagined that we would get to that point soon,” she says.

But the planning process has given her some ideas. For one, she could find funding to participate from Zambia in research at a laboratory like CERN. Alternatively, she could set up something on a much smaller scale in Zambia.

“If I were to do something on a smaller scale, I wouldn’t even need a big accelerator,” she says. “I would need very basic equipment just to start having something to play around with students.”

Mohamed Chabab, a professor of physics and director of the High Energy and Astrophysics Laboratory at Cadi-Ayyad University in Morocco, joined the African Strategy as a convener of the particle physics working group. The strategy is an exciting challenge, he wrote in an email.

“Indeed, beyond the personal satisfaction, it is also one of my responsibilities as an African physicist to contribute to such initiatives aiming for improvement of the scientific research system in Africa and the reform of higher education, which are among the essential keys to unlock the minds and boost the economic growth and sustainability."

Scientists in many African countries face challenges such as limited research infrastructure, scant or nonexistent sources of local funding for scientists, inadequate educational opportunities for youth, and cultural and political forces that pressure girls and women to leave school and science.

African Strategy participants want to make sure the solutions to these problems come from African scientists. And participating in strategic discussions is an important part of that.

“We feel that the African participation in these discourses has major benefits,” Malek and Assamagan wrote in their letter. “It would allow international partners interested in capacity development and retention in Africa to integrate inputs from Africans themselves, rather than to default to their own views of how they may want to ‘help’ Africans. In addition, the help—in whichever form it is delivered—will have more impact.”

From now until October, scientists are invited to submit letters of intent that will be used to form white-paper study groups for the strategy. They plan to hold a community planning meeting December 12-18 during the African Conference on Fundamental and Applied Physics, which will take place at Cadi Ayyad University in Morocco.

“The world is a global village today because of technology, and you cannot separate technology from physics,” wrote Iroka Chidinma Joy, an African Strategy group convener and chief engineer in the engineering and space systems division at the National Space Research and Development Agency in Nigeria, in an email.

“So the ASFAP is trying to encourage Africans to remember that everything starts with physics and will end with it, and the key goal is to get everyone—policymakers, educators, researchers, communities, institutions, etc.—involved in bringing every aspect of physics together for social-economic development in Africa,” she wrote. “There’s no time that’s more perfect than now.”

This time, speakers came to present on physics strategies from Japan, China, India, Europe, the United States and Latin America—and how they might inform the development of the African Strategy.