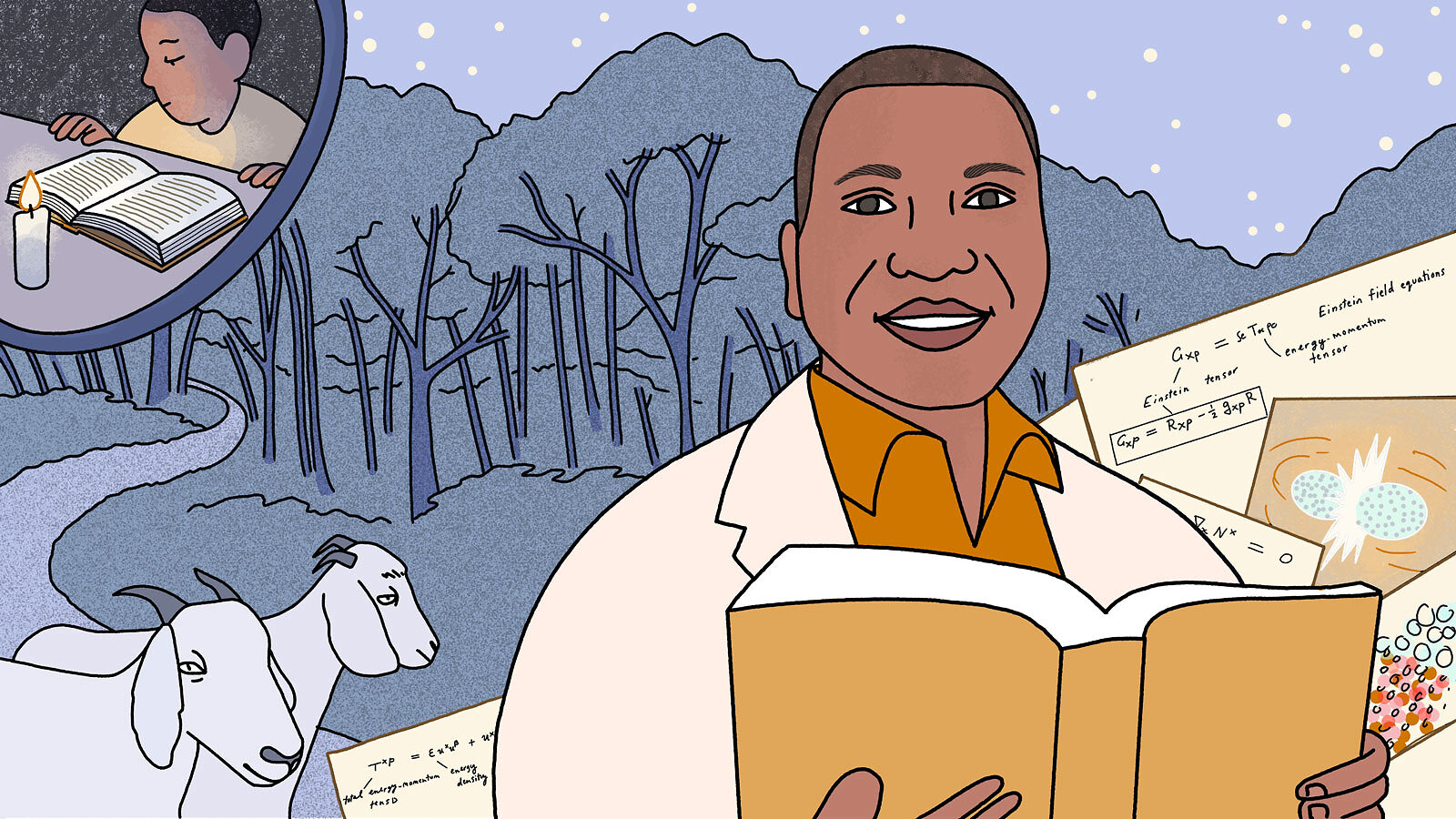 Growing up in a government-segregated “Black homeland” in South Africa, Azwinndini Muronga began looking after his family’s livestock at the age of 6. On school days, his mother would take the sheep, goats and cows to the forest to graze at noon. “When I came back in the afternoon, I would quickly change my school uniform and dash to the forest to take over,” he says.

It was there that his love for science began.

“Come sunset, you’re starting to take your sheep, your goats, your cows, heading home,” he says. “And from time to time, one of the goats, the sheep, will venture into the forest. And you cannot go home without all your livestock—then you will be in trouble.”

He says he found his way those nights “guided by the moon and the stars.”

He was afraid to wander through the dense foliage. “But then, you know, the music of the insects from the forest” calmed him down, along with “the beauty of the Milky Way—because in the villages, you don’t have street lights—you can see almost everything,” Muronga says.

When he arrived home, he completed his homework by candlelight or parrafin lamp.

During high school, Muronga took his books with him to the fields and forests where the livestock grazed. He studied in tall trees, where he could see the animals from above and his books in the sunlight.

Those studies, and those early nights following the stars, started him on a path that would eventually lead him across oceans, to the United States and Germany, then back to South Africa, where he is now dean of science at Nelson Mandela University. 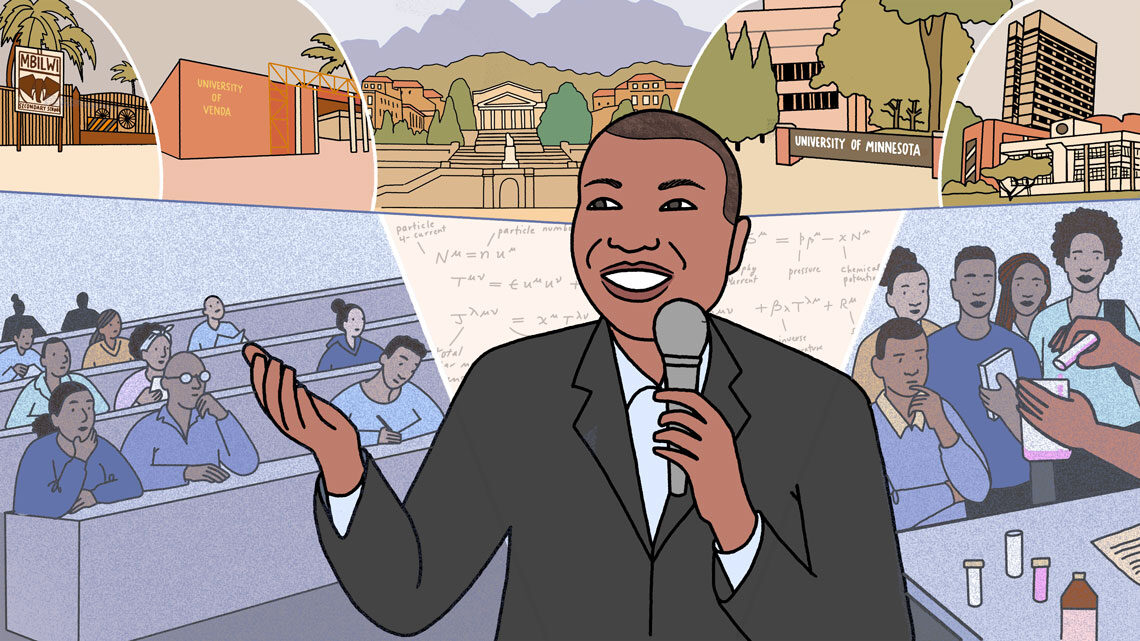 Under apartheid, South Africa segregated Black South Africans, isolating them in a system of “Bantustans” or “homelands.” Muronga was born in Venda, a homeland in the north of the country, close to the borders of Zimbabwe, Mozambique and Botswana.

Muronga’s mother, who never went to school, sold homemade beer to fund her children’s education. Muronga says it took her about a week to get a new batch of beer ready, following many steps to make it “really perfect for drinking.” He says she relied on her senses, “cooking without measurement, but the salt will be right. Without using [a] book, everything will be just perfect—the sugar will be perfect, the spice will be perfect.”

Muronga says he never sampled the drink, but the brewing process captured his attention. “Before I knew that there was a branch of science called chemistry, it was done at home,” he says.

Muronga loved mathematics in primary school, but it took a while for him to hear anything about physics, astrophysics and many other fields of science, he says. “Unlike a developed nation, where you know about these things even through the TV, there, in those types of villages, you have got no access to the outside world.”

Muronga took his first physics class at Mbilwi Secondary School in 1986. The course was taught by his high school principal, Itani Phanuel “I.P.” Matamba, who happened to have a master’s degree in physics. “Not just physics, theoretical physics,” says Muronga.

Muronga dreamed of studying medicine after secondary school, but he couldn’t secure funding to study at an elite university. Instead, inspired by Matamba, he completed a three-year bachelor’s degree in physics at the University of Venda. Toward the end of his degree program, Matamba became a lecturer, teaching courses in statistical physics and quantum mechanics.

Muronga says he felt called toward postgraduate studies. But continuing on in physics would require him to leave Venda, and he had already completed a year of training to be an educator. And as the oldest of 17 children, he was expected to stay in Venda to help with his younger siblings.

Muronga was promised funding to continue his physics education at the University of Cape Town about 2000 kilometers (more than 1200 miles) away. He decided to go, but he couldn’t bear to see his family members’ reactions. “This pressure mountain was going to be high,” he says.

So he told one aunt, who agreed to break the news to the rest of his family after he left. And then, he says, he “literally ran away from home.”

When he arrived in Cape Town, more challenges awaited.

He hadn’t realized that he needed to apply for housing, so administrators scrambled to help him find a place to stay. And because he earned his undergraduate degree at the University of Venda, a historically Black university, his “education wasn’t trusted,” he says.

When two physicists from the United States stopped to see Muronga’s graduate advisor, Jean Cleymans, Muronga discussed his research project with them. They asked Muronga if he had thought about earning his PhD in the US.

Because of how his education had been valued thus far, Muronga knew it would be difficult to be recognized in the United States. He says that until that duo visited with him, he had given up. “I was just thinking ‘Bro, this is it—this is the final destination for me.’”

But with their advice, he found his way through the application process and wound up studying with one of them, Larry McLaren, at the University of Minnesota.

While in Minnesota, he wrote a thesis on causal second-order viscuous relativistic fluid dynamics that the university has since described as “seminal,” and which “has been cited more than 600 times and is now incorporated in large state-of-the-art computer codes written around the world to model collisions between nuclei at high energy.”

After defending his thesis, Muronga went on to a postdoctoral fellowship at the University of Frankfurt. Right after he started a second postdoc, his old advisor asked him to return to the University of Cape Town.

“That wasn’t my intention,” Muronga says.

But he says when he reflected on his own path into physics, he decided to return. “It would be selfish of me, had I not come,” he says. “The journey I had to go through, it must be easy for the next generation.”

Muronga took a role as an associate professor at the University of Johannesburg. While there, he helped establish the Soweto Science Centre, which he directed for five years. The center provides enrichment classes for high school students and professional development programs for teachers.

Opening a center in Soweto, a township on the outskirts of Johannesburg, was particularly important to Muronga.

During apartheid, the South African government declared that Black children must be taught certain subjects in Afrikaans, the language of the descendents of Dutch colonists. On June 16, 1976, students in Soweto protested the decree.

Apartheid forces opened fire on the protesters, killing four people, including a 12-year-old boy. Photographs of the event brought global attention to the horrors of apartheid.

“For me, going there to uplift those communities that were very much oppressed… bringing them to life… that, for me, you wouldn’t have to really convince me that this was something you should do,” Muronga says. “It was sort of like a calling to say, ‘Okay, now here is your role of correcting the past, the 1970s inequalities and oppression.’”

While serving as director of the center, Muronga met Brian Masara, CEO of the South African Institute of Physics.

SAIP was launching a collaborative physics teacher-development project with Institute of Physics in the United Kingdom, Masara explains in an email. “We were looking for local partners who could help us pilot the project,” and Muronga “was very enthusiastic about the project and advancement of science and physics education in South Africa,” he writes.

Muronga went on to serve as president of the SAIP from 2015 to 2017. He currently serves as the institute’s ambassador for outreach and teacher development.

Now at Nelson Mandela University, Muronga encourages other scientists to share his view of engaging students and members of the public “in the same footing as learning and teaching, as well as research and training.”

In March, he finished his first five-year term as dean of science, and his contract was extended for a second five-year term. “One of the achievements was to make sure that engagement was part and parcel of the faculty,” he says. “I call it the third leg of an African pot.”

The university is currently drafting its vision for 2030, Muronga says. “And the core message there is: The university in service of the society,” all of it.

Muronga says he hopes that physicists in the United States and elsewhere, especially those in leadership positions, will think of their role in promoting both science and a more equitable society. “For public engagement with science to anchor its roots within institutions of higher learning and research facilities, we need transformative leadership at all levels,” he says.

Many factors led Muronga to a career in physics. In Venda, his first physics teacher and his excellent professors gave him a good foundation and understanding of the subject. He received financial support that allowed him to continue his education. His thesis advisor and physicists from the University of Minnesota provided mentorship that encouraged him to push himself farther.

But to benefit from any of these opportunities, he needed to survive long enough to experience them. That wasn’t a given, especially for a child growing up in a system that in so many ways chipped away at the lives of Black people. That wasn’t the case for Hector Pieterson, the Black child who was killed in the uprising in Soweto.

Today Azwinndini encourages physicists to find ways to support members of oppressed and marginalized communities, both by offering the inspiration, mentorship and funding they might need to find their way into physics—but also by countering the systems that prevent so many people from even having a chance to try.