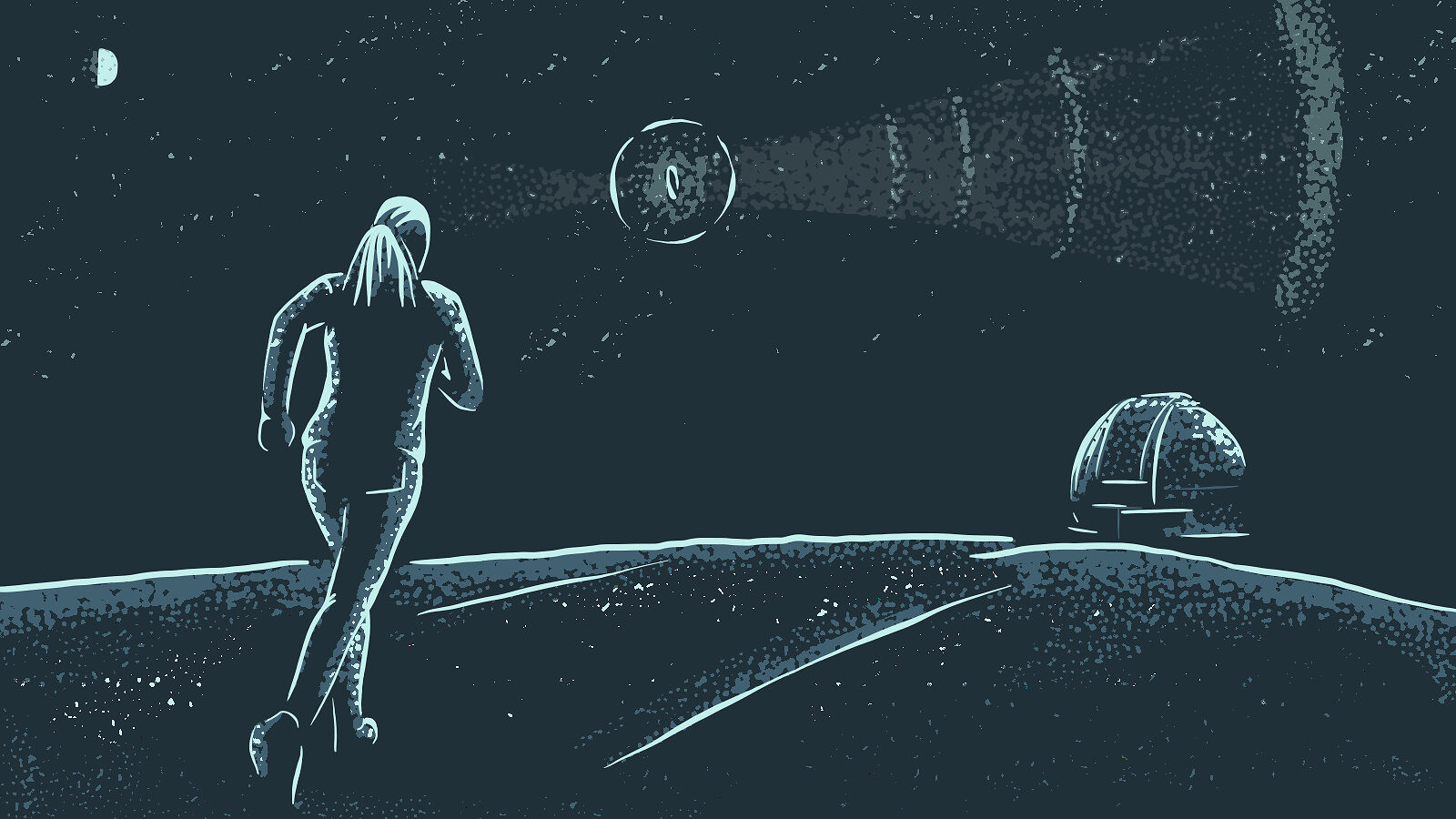 Elena Moretti was filling out paperwork in her room at the astronomer dormitories at the Canary Islands’ Roque de los Muchachos Observatory when, just before 9 p.m., her phone rang. On the line was Moretti’s colleague Cosimo Nigro, who was at the control room of the Major Atmospheric Gamma Imaging Cherenkov telescope, known as MAGIC. He wanted to know whether someone was running a test on their project.

Within minutes, she was running down the road to investigate.

While scientists have detected GRBs for decades, there seemed to be a limit on the energy level of the gamma rays they captured. Was the limit a feature of GRBs? Some scientists thought that it was not, and they hoped observations could prove it.

If the very-high-energy gamma rays showed up the way some theorists suspected they would, the energy spectrum that observatories measured would show a second higher-energy intensity bump in the data.

Some scientists had given up on the idea of the second bump—after decades’ worth of searching, it had yet to appear.

But that night, January 14, 2019, with its very first detection of a GRB, MAGIC became the observatory that found the second bump—and helped change the scientific world’s understanding of one the great mysteries of the universe.

“It was incredible,” says Moretti, an astrophysicist at the Institute for High Energy Physics in Barcelona, Spain. “The way you look for something for a long time, and then suddenly it materializes and it’s so bright, so undoubtful.” 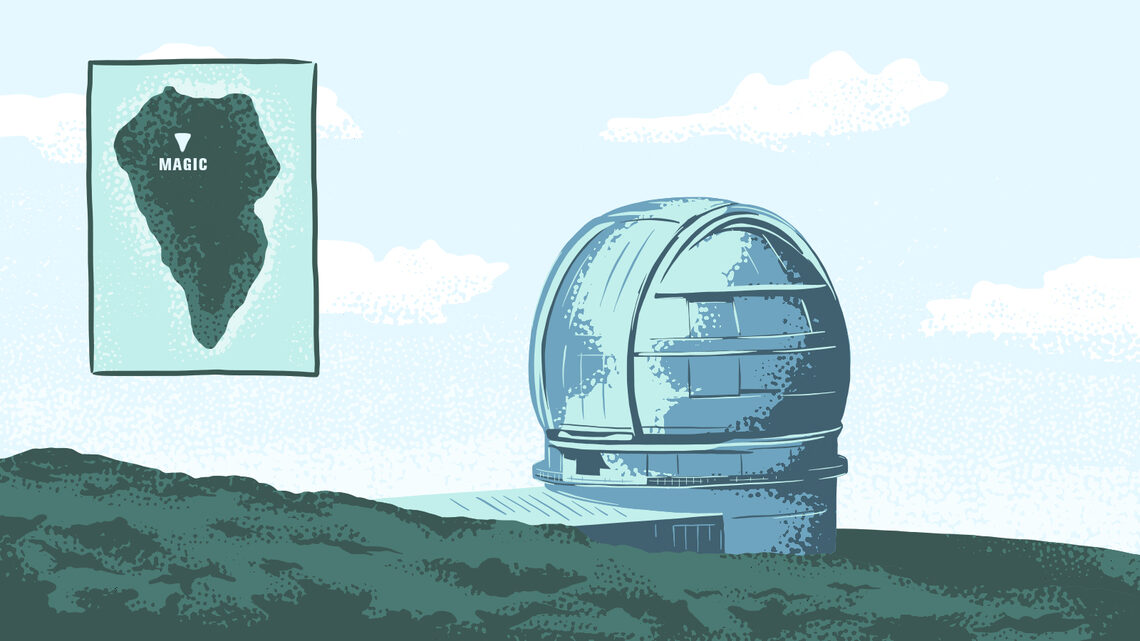 Gamma-ray bursts were serendipitously discovered in the midst of the Cold War, when the US military was scouring the sky for evidence of nuclear weapons. At the time, US satellites spied radiation with energy much higher than visible light that would have come from nuclear blasts. It wasn’t until the next decade, after those detections were declassified, that scientists realized the blasts were coming from cosmic sources. It was later still, in the 1990s, when they realized the signals were coming from outside the galaxy.

Since then, several space-based observatories—including NASA’s Neil Gehrels Swift Observatory and the Fermi Gamma-ray Space Telescope, which is supported by NASA, the US Department of Energy and international partners—have been especially revolutionary to astronomers’ understanding of what leads to such enormously energetic blasts of gamma-ray radiation.

GRBs come in two types: short- and long-duration, based on whether their initial gamma-ray blasts last less or more than two seconds. A short-duration GRB happens when two compact objects, such as two neutron stars, slam into each other. A long-duration GRB, on the other hand, results from a specific type of core-collapse supernova, what happens when a star around at least 10 times as massive as our sun exhausts the fuel supplies at its core, causing it to collapse into a black hole.

In both GRB types, the energetic event (whether a collision or collapse) blasts out jets of particles traveling at nearly the speed of light. Interactions inside the jets—between blobs of plasma that are emitted at different times and have different speeds—create a GRB’s initial burst of gamma rays.

As the jets travel through gases surrounding the event site, they create another characteristic feature of GRBs: the afterglow, which shines across the electromagnetic spectrum in radio up to gamma rays.

Astrophysicists have learned a great deal about how such cosmic events generate gamma rays and other electromagnetic radiation. According to astrophysicist David Williams, who has studied GRBs for decades, they produce what’s called synchrotron radiation. “As the burst ejecta plow into the surrounding medium, that burst accelerates electrons,” which spiral around magnetic field lines, shooting out photons like mud off a tractor tire.

But some theorists have thought there could be more to the story—later in the afterglow, a second bump. The second bump would come from the electrons slamming into some of their just-produced photons and bumping those photons’ energies even higher in a process called synchrotron self-Compton.

Twenty years ago, several theorists published papers arguing that, given what scientists knew then about GRBs, synchrotron self-Compton should occur. University of Nevada physicist Bing Zhang, who wrote one of those papers, says he was therefore not surprised by the MAGIC detection. “Synchrotron self-Compton is inevitable, and it should be detected,” he says. 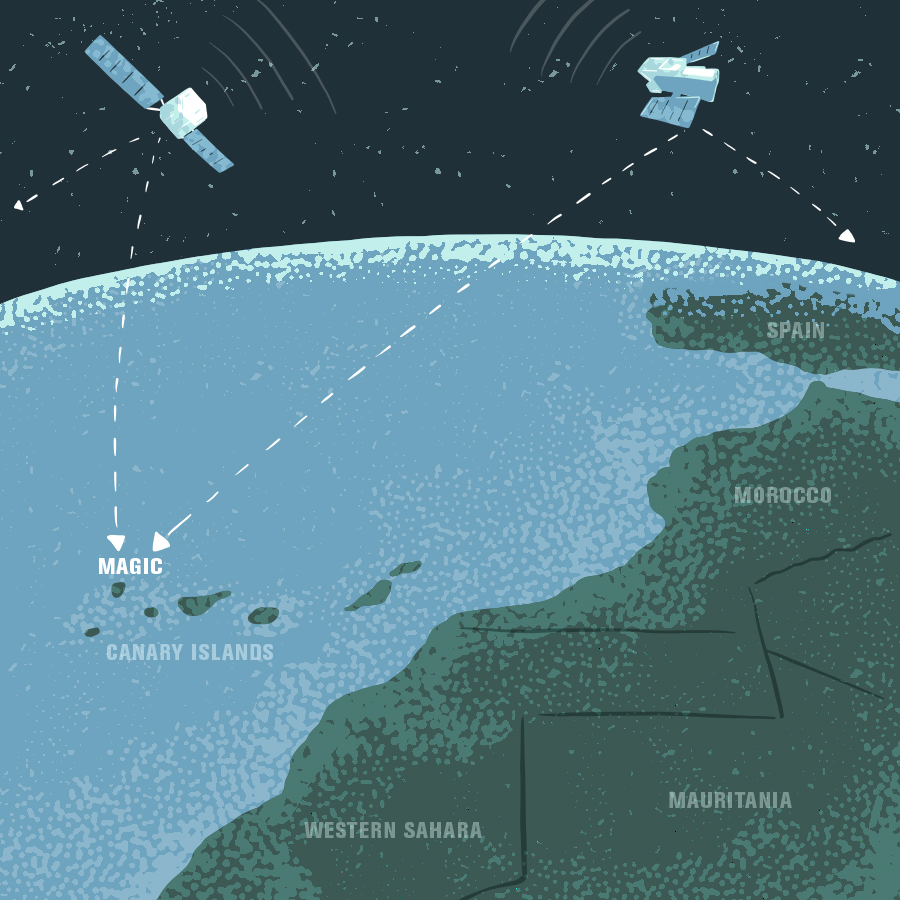 Searching for a second bump

The space-based observatories that have provided so much information about GRBs have never seen the kind of gamma rays that would produce a second bump—because they can’t.

This is for two reasons. First, Swift, which predominantly detects X-rays and ultraviolet rays, would need different technology to detect such high-energy rays. Second, space-based observatories tend to be equal to or smaller than the size of a full-sized refrigerator. Very-high-energy gamma rays are rare, and it takes a much larger detector than that to capture them.

But satellites like Fermi and Swift can still help. When they detect a GRB, they automatically signal additional telescopes to swing around to take a closer look at what they’ve seen.

That day in January 2019, the MAGIC telescope’s computer received the alert and reacted quickly. It analyzed where in the sky the GRB was and whether MAGIC could see it. When it determined it could, it gave a command to quickly move both of MAGIC’s 17-meter-wide telescopes’ thin mirrors, each mounted on a lightweight carbon-fiber frame.

“In this whole process, there is no human,” Moretti says. “We received the alert more or less 20 seconds after the beginning of the GRB. Another 30 seconds—so 50 seconds from the GRB—and we were pointing.”

It was around then that Nigro called. While on the phone, he emailed Moretti the first plot of the GRB signal, which sent Moretti running. “In five minutes, I was on site,” she says.

On the computer screens in the control room, she watched the automatically generated analysis of how the signal’s energy changed over time. Moretti, Nigro and the other observers checked the location for other bright sources, noisy signals that could be confused with a GRB, and found none.

It was MAGIC’s first detection of a GRB. And the source they saw was briefly 100 times as bright as gamma-ray astronomy’s calibration source, the Crab Nebula.

MAGIC collected photons over the next few hours with energies from 300 GeV up to 2 TeV, or 2 trillion times the energy of visible light. Once data across multiple wavelengths of radiation from other observatories were combined, the signal became clear: The spectrum in gamma-ray energies peaked not once, but twice.

In that moment, Moretti says she knew “we were looking into the other component, the one that we had been searching for for a long time… I did not know that it was this beautiful, but I knew that it would come. It was just a matter of time.”

Moretti says she looks forward to the Cherenkov Telescope Array, the next-generation gamma-ray observatory she is also working on in the Canary Islands. Most of the more than 30 institutions that participate in MAGIC—in Germany, Spain, Italy, Japan, Switzerland, Croatia, Finland, Poland, India, Bulgaria, Brazil and Armenia—also participate in the CTA.

Currently in the prototype stage and slated to begin observations in the mid 2020s, CTA will have several times the observing sensitivity as any of the current observatories. It will also be able to monitor a larger area of the sky. CTA will comprise two separate arrays, one in Chile and the other just down the street from MAGIC.

The two-bump January 2019 GRB, along with a one-bump—but also promising—2018 GRB observation by the High Energy Stereoscopic System, or HESS, in Namibia, gives CTA researchers reason to expect many more GRB detections. The current estimates suggest CTA will capture a few each year.

As more observations rack up, it will lead to an even better understanding of these enormously bright blasts.