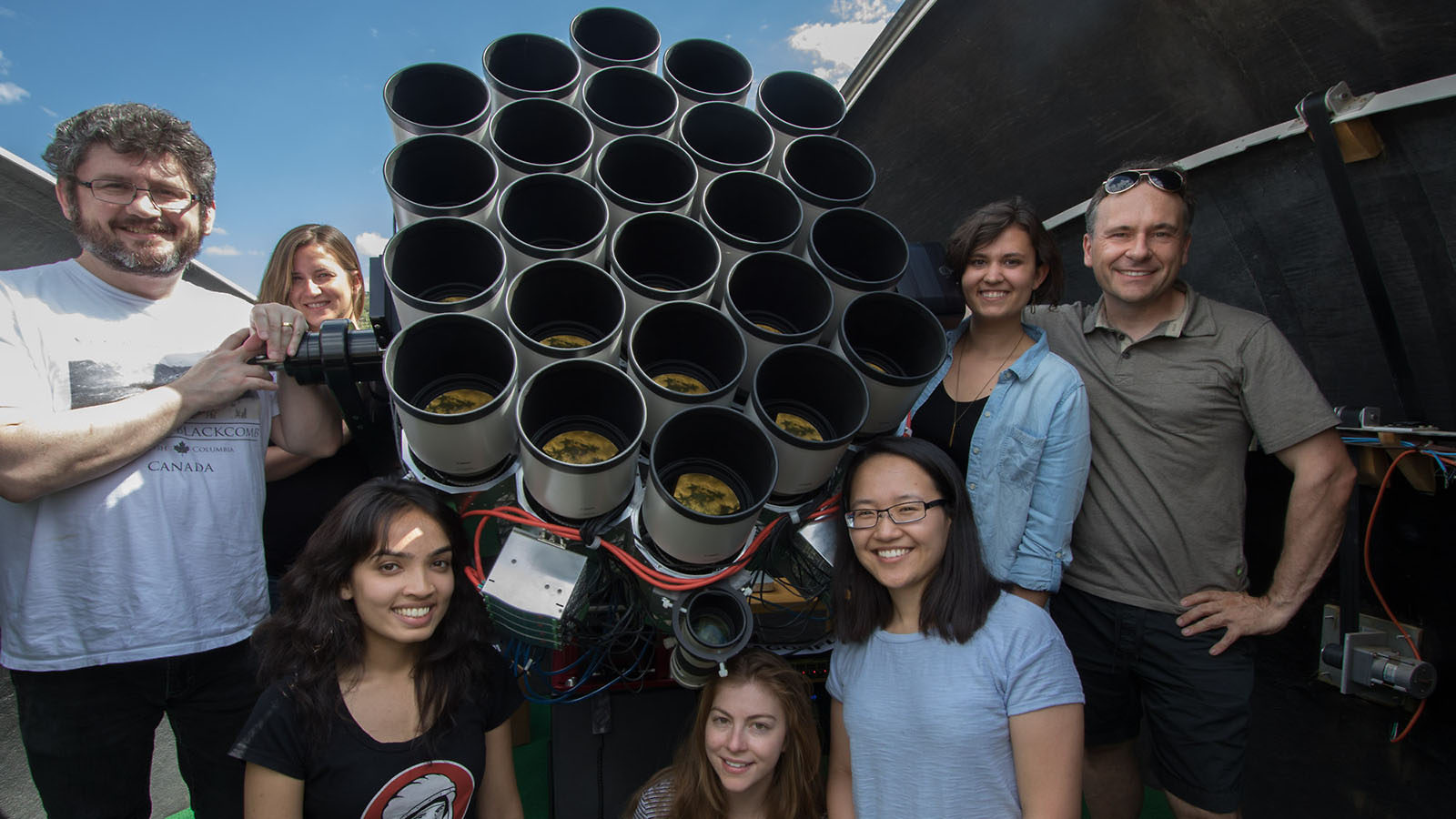 In 2011, astronomers Pieter van Dokkum and Roberto “Bob” Abraham found themselves in a restaurant in Toronto nursing something of a mid-life crisis. Abraham, a professor at the University of Toronto, and van Dokkum, at Yale, had become successful scientists, but they discovered that often meant doing less and less science and more and more managing large, complex projects.

“They’re important and they’re great and you feel this tremendous obligation once you’ve reached a certain age to serve on these committees because you have to set things up for the next generation,” Abraham says. “At the same time, it was no longer very much fun.”

The two friends fantasized about finding a small, manageable project that might still have some impact. By the time a few hours had passed, they picked an idea: using new camera lenses to find objects in the sky that emit very little light.

They had no way of knowing then that within the next five years, they’d discover an entirely new class of galactic object.

From the handmade telescopes of Galileo to spacefaring technological marvels like Hubble, all telescopes are designed for one basic task: gathering light. Telescope technology has advanced far enough that Hubble can pick up light from stars that were burning just 400 million years after the universe first popped into existence.

But telescopes often miss objects with light that’s spread out, or diffuse, which astronomers describe as having low surface brightness. Telescopes like Hubble have large mirrors that scatter light from bright objects in the sky, masking anything more diffuse. “There’s this bit of the universe that’s really quite unexplored because our telescope designs are not good at detecting these things,” Abraham says.

When van Dokkum and Abraham sat down at that bar, they decided to try their hands at studying these cosmic castaways. The key turned out to be van Dokkum’s hobby as an amateur insect photographer. He had heard of new camera lenses developed by Canon that were coated with nanoparticles designed to prevent light scattering. Although they were intended for high-contrast photography—say, snapping a photo of a boat in a sunny bay—van Dokkum thought these lenses might be able to spot diffuse objects in the sky. 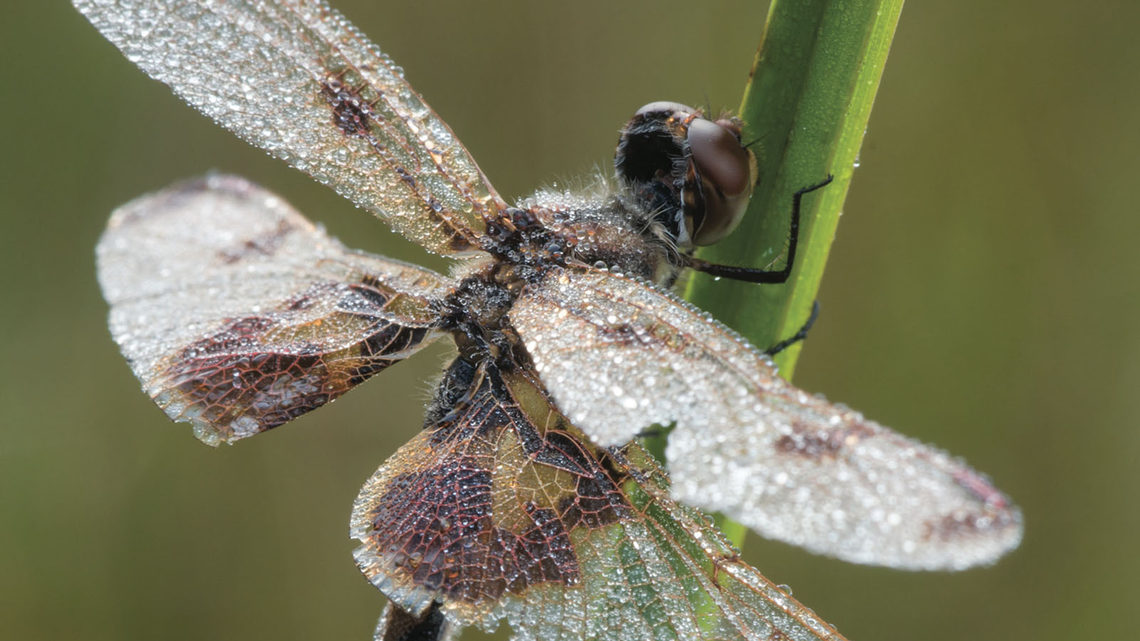 Abraham was skeptical at first: “Yeah, I’m sure the Canon corporation has come up with a magical optical coating,” he recalls thinking. But when the pair took one to a parking lot in a dark sky preserve in Quebec, they were sold on its capabilities. They brought graduate students on board and acquired more and more lenses—not an easy task, at $12,000 a pop—eventually gathering 48 of them, and arranged them in an ever-growing honeycomb shape to form what can rightly be called a telescope. They named it Dragonfly.

In 2014, both van Dokkum and Abraham were at a conference in Oxford when van Dokkum examined an image that had come in from Dragonfly. (At the time, it had just eight lenses.) It was an image of the Coma Cluster, one of the most photographed galaxy clusters in the universe, and it was dotted with faint smudges that didn’t match any objects in Coma Cluster catalogs.

Van Dokkum realized these smudges were galaxies, and that they were huge, despite their hazy light. They repeated their observations using the Keck telescope, which enabled them to calculate the velocities of the stars inside their mysterious galaxies. One was measured at 50 kilometers per second, 10 times the speed the galaxy should be moving based on the mass of its stars alone.

“We realized that for these extremely tenuous objects to survive as galaxies and not be ripped apart by their movement through space and interactions with other galaxies, there must be much more than meets the eye,” van Dokkum says.

The galaxy, dubbed Dragonfly 44, has less than 1 percent as many stars as the Milky Way, and yet it has to be just as massive. That means that the vast majority of its matter is not the matter that makes up stars and planets and people—everything we can see—but dark matter, which seems to interact with regular matter through gravity alone.

Astronomers have known for decades that galaxies can be made almost entirely of dark matter. But those galaxies were always small, a class known as dwarf galaxies, which have between 100 million and a few billion stars. A dark-matter-dominated galaxy as large as the Milky Way, with its 200 billion or more stars, needed an entirely new category. Van Dokkum and Abraham coined a term for them: ultradiffuse.

“You look at a galaxy and you see this beautiful spiral structure and they’re gorgeous. I love galaxies,” Abraham says. “But what you see is really just kind of the frosting on the cake. The cake is the dark matter.”

No one knows how many of these galaxies might exist, or whether they can have an even larger percentage of dark matter than Dragonfly 44. Perhaps there are galaxies that have no luminous matter at all, simply massive dark blobs hurtling through empty space. Though such galaxies have thus far evaded observation, evidence of their existence may be lurking in unexamined data from the past.

And Dragonfly could be the key for finding them. “When people knew they were real and that these things could exist and could be part of these galaxy clusters, suddenly they turned up in large numbers,” van Dokkum says. “They just escaped attention for all these decades.”