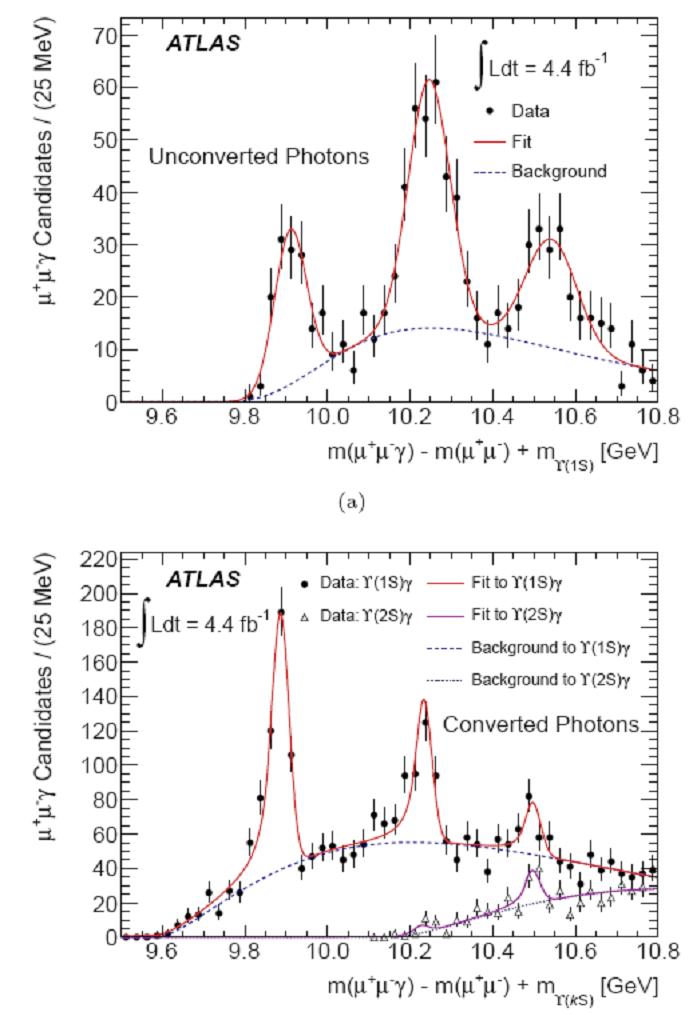 The spectrum of the Chi-b states: the leftmost peak is the Chi-b(1P), the middle one the Chi-b(2P), and the rightmost the new Chi-b(3P). The photons are detected either by the electromagnetic calorimeter (unconverted) or by the ATLAS tracking detectors if they have interacted with material and converted to an e+e- pair. Courtesy: ATLAS collaboration.

The first new particle was seen at the Large Hadron Collider at CERN in Switzerland shortly before Christmas.

The ATLAS collaboration announced the discovery of the particle Chi-b (3P), which consists of a bottom quark and antiquark particle bound together by the strong force. This force holds all atomic nuclei together so understanding Chi-b (3P) could help physicists understand better how the tiniest components of matter hold together to form the basis of everything you see: planets, people, plants.

Theorists have long proposed the existence of the Chi-b (3P), but until now it was not observed at any experiments. The particle is slightly heavier than predicted, meaning the quark anti-quark pair are a little more loosely bound than expected.

"Normally, a new particle is discovered in one or at most two channels, and the first discovery is at the very edge of statistical significance. This time things are different: it’s seen in three different channels and the peak is unmistakable," according to an email by Tom LeCompte, the physics coordinator for the ATLAS collaborator and a physicist at Argonne National Laboratory outside Chicago. "The outstanding LHC performance is responsible for this by delivering so many collisions in such a short time."

The ATLAS collaboration consists of 3,000 physicists from 38 countries.

Chi-b (3P) particle belongs to the boson family of particles just as the sought-after Higgs boson does. While the Higgs boson is suspected of giving all particles mass, Chi-b (3P) could explain how the mass of various elementary particles join together to make more massive, complex structures.

The bound quark states that make up Chi-b (3P) are collectively called quarkonium, and are analogues of the hydrogen atom, with each new particle corresponding to a different energy level. As with the hydrogen atom, physicists can observe transitions between these states through emission of a photon, according to the ATLAS collaboration.

A publication has been submitted to Physical Review Letters.

Read the ATLAS white paper: "Observation of a new chi_b state in radiative transitions to Upsilon(1S) and Upsilon(2S) at ATLAS"