Boosting luminosity: how to get the most bang for your proton in the LHC Just after midnight on April 22, the LHC set a new world record for instantaneous luminosity at a hadron collider. The peak can be seen at the far right of the luminosity plot. (Image courtesy of CERN.)

In particle physics, luminosity measures how many protons pass through a given area in a certain amount of time. Squeezing more protons into increasingly smaller spaces boosts the luminosity, which gives protons a better chance of colliding. Adding up the luminosity over a long period of time – say, a year – provides the integrated luminosity, which is related to the total number of collisions seen by the detectors.

As data pours in, LHC experimentalists will comb through trillions of collisions in search of exotic particles and new physics. Such a large data set is necessary for researchers to spot these rare events, so LHC accelerator scientists will use several tactics this year to deliver as many collisions as possible.

Packing in the protons

One way to get more collisions is to increase the number of proton bunches in each particle beam. Think of two marbles rolling toward each other from opposite ends of a hallway. There is a small chance that they will collide in the middle. But rolling 10 marbles from each end would increase that chance.

Likewise, circulating more proton bunches at once means the two beams will cross paths more often, upping the odds of a collision. Last year, scientists ran the LHC with 368 proton bunches per beam. This year, they aim to increase the record to more than 900 bunches during a single physics run.

Now imagine taking those marbles from the hallway and sending them on a collision course through a paper towel tube. The chance of two marbles colliding would rise significantly. For this reason, scientists use focusing magnets to squeeze the proton bunches down in size as they cross paths inside the detectors.

Another trick for getting more proton collisions is packing the bunches closer together. In 2010, proton bunches in the LHC were spaced 150 nanoseconds apart. Now, the proton bunches race around the 17-mile tunnel at 50-nanosecond spacing, or just 50 feet apart.

One final effort to increase the number of collisions scientists can get out of the LHC is to speed up the overall process of injecting protons. 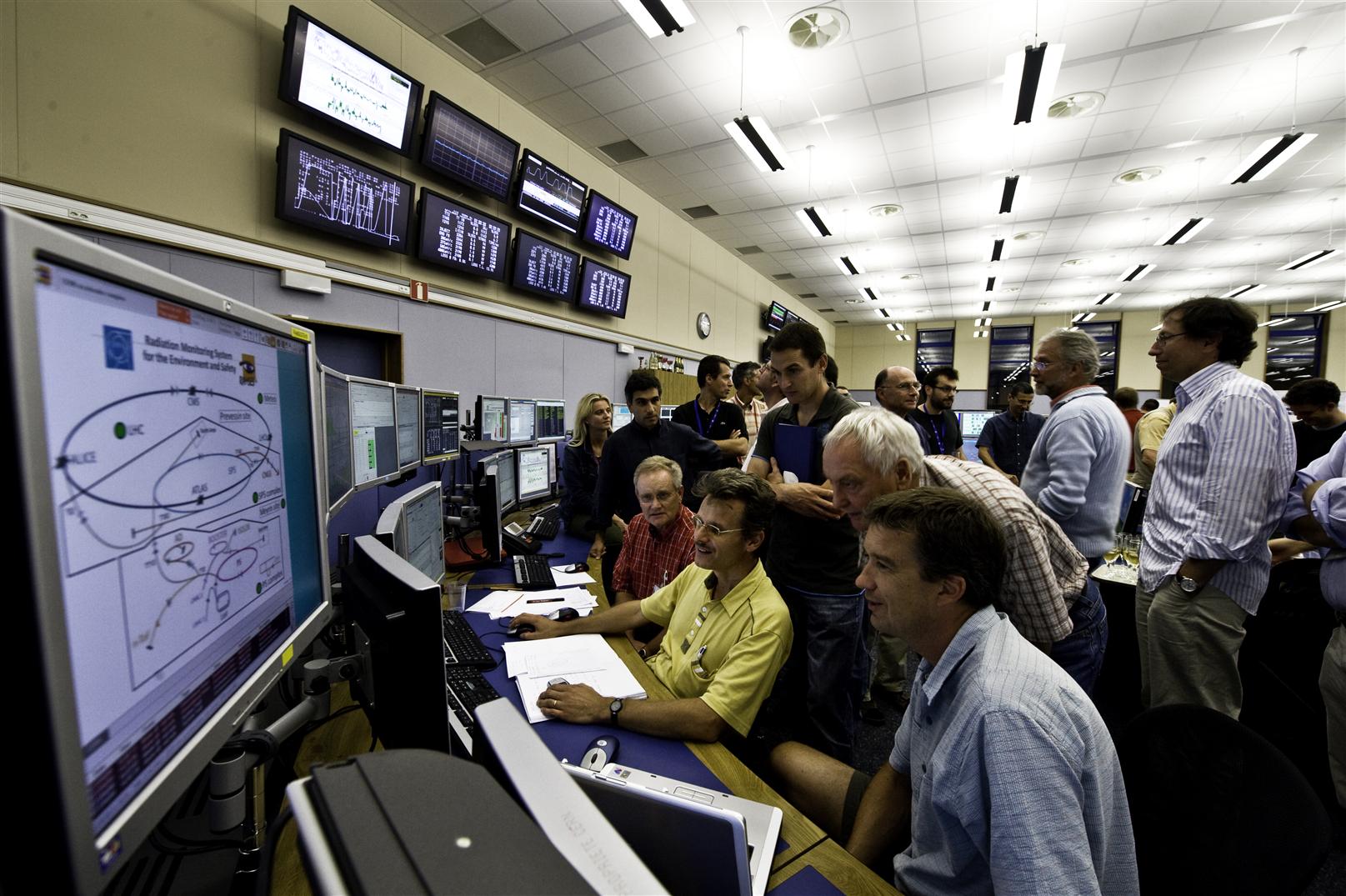 Accelerator scientists watched eagerly as the first proton bunch made its way from the SPS to the LHC in 2008. This is just one of many critical steps toward colliding high-energy protons. (Image courtesy CERN.)

More collisions mean more chances to look for the unknown. “And that’s the real reason we’re here – for the Higgs, for supersymmetry,” Lamont said.

Protons go through multiple stages of acceleration before they are used in collisions, starting with a low-energy kick-start from a linear accelerator. They gain speed in the booster ring and make their way to the proton synchrotron, where they are separated into multiple bunches and accelerated to 26 giga-electron volts. Finally, they reach the super proton synchrotron, or SPS, where they are accelerated to 450 GeV and stored before being injected into the LHC.

“Injection is one of the most critical phases,” said Giulia Papotti, and engineer-in-charge at the LHC control center. While the process up to this point is well controlled and takes only a matter of seconds, moving the proton bunches from the SPS to the Large Hadron Collider can be tricky. The bunch characteristics have to be exact, from their length and width to the spacing between them; otherwise the beam gets dumped and the process starts over from the beginning.

Improved software controls will play a large part in enhancing the injection process. Checks on bunch length and variations from bunch to bunch will determine if the beam quality is good enough for the LHC. If not, the bunches can be dumped at the SPS without compromising the LHC beam quality or forcing the entire injection process to restart. Also, if there is a problem in one of the rings, the beam operators can continue to fill the other ring while the issue is sorted out.

Slow and steady wins the race

Finally, there are quality control checks at the LHC after each injection that will help to train the machines and keep the beam consistent throughout the run.

“We just have to keep working and listen to the machine,” Papotti said. “Experience will tell us what we have to do.”

Years of experience and building up a thorough understanding of their machine helped Tevatron scientists achieve record luminosities, which were far above the particle collider’s design capabilities. Ronald Moore, the Tevatron department head at Fermilab, says they employed many of the same tactics, including increasing the number of bunches and squeezing the beams into smaller spaces. As technology improved, the Tevatron scientists were better able to monitor and correct variations in the beam, which led to hardware upgrades and more automated processes.

“Consistency has been key,” Moore said. “Using the same beam configurations from one store to the next allowed us to tune the machine to a known state and keep it there. But perhaps the most important part has been the people. Everyone wanted to see the machine perform better and better.”

In the coming years, the LHC accelerator team will work to inject as many as 2808 bunches spaced 25 nanoseconds apart, and to complete this task in about 20 minutes. The ensuing luminosities will likely produce physics results that will hold a few records of their own.