This story first appeared in DOE Pulse on April 4. 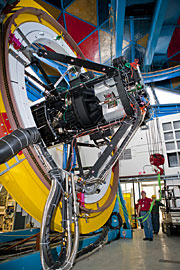 A replica ring of the top-end of the Blanco telescope allowed technicians at Fermilab to test the installation of a 570-megapixel camera and check how camera parts would function as the telescope rotates. This testing significantly reduces the amount of telescope down time that will be required during the assembly in Chile.

Building and installing one of the world’s largest digital cameras to solve the mystery of dark energy requires the collaboration of scientists and industry from across the globe. The Dark Energy Survey’s combination of survey area and depth will far surpass the scope of previous projects and provide researchers for the first time with four search techniques in one powerful instrument. More than 120 scientists are collaborating to determine the true nature of dark energy, the mysterious force that accelerates the expansion of the universe. Taking images of galaxies from the time the universe was only a few billion years old, the DES will trace the history of the expanding universe roughly three-quarters of the way back to the time of the Big Bang.

But first researchers needed to build the 570-megapixel camera at DOE’s Fermi National Accelerator Laboratory and make sure it works. Nearly all of the camera’s parts made their way to Fermilab for assembly and testing during the last 12 months. The components were assembled and operated on a full-size replica of the front end of the 4-meter Blanco telescope in Chile, built by Fermilab and Argonne National Laboratory.  Testing finished successfully in February. During the next few months, physicists will be putting the finishing touches on pieces of the camera and shipping them to the Cerro Tololo Inter-American Observatory in Chile where they will receive another round of tests before installation.

The high-tech supply chain tapped the expertise at four DOE Office of Science national laboratories and more than two dozen institutions and universities in the United States and abroad.  More than 120 companies in the United States contributed know-how and parts. Fermilab took the lead in the assembly and testing of the camera and building a cryogenics system several times larger than those used in previous ground-based sky surveys, while Berkeley and Argonne national laboratories played key roles in the camera development.

Berkeley Lab developed the Charge Coupled Devices used in the camera and did some of the processing of the silicon for the CCDs before sending the pieces to Fermilab for packaging of CCD chips. The unique design of these CCDs will give the camera unprecedented sensitivity for red and near-infrared wavelengths, allowing it to record more light for a given exposure time. The camera contains 62 CCDs for observing with 8 million pixels each, plus 12 CCDs with 4 million pixels each for guiding and focusing.

Argonne National Laboratory helped construct the calibration camera to conduct a mini-sky survey last year from a telescope adjacent to the Blanco telescope. This scaled-down version of the dark energy camera allowed for testing of the experiment hardware, software and observing strategies as well as created a baseline of celestial objects for Dark Energy Survey. Argonne also constructed several smaller components for the full-size camera and some large mechanical systems, including the heavy apparatus that installs and removes a 1-ton mirror from the front of the camera.

SLAC National Accelerator Laboratory took the lead in constructing a separate, small telescope with an infrared camera that will sit on a mountain near the Blanco telescope in a separate enclosure. This telescope will monitor cloud coverage so that the Dark Energy Camera can adapt its survey modes to various atmospheric conditions.

The DES collaboration expects to take its first astronomical images with the installed Dark Energy Camera before the end of 2011.