Normally, the data points from the CERN cafeteria are extremely repeatable over the course of a week.  Monday through Friday the data points cluster briefly at the coffee machine at 9 am, and then around the pizza station at 12:30.  They shift from the patio region to the indoor region around October, and reverse their movement in April. The start up of the Large Hadron Collider saw an increase in data volume, but otherwise the points spread themselves out evenly over the expanse of the cafeteria, day in and day out. 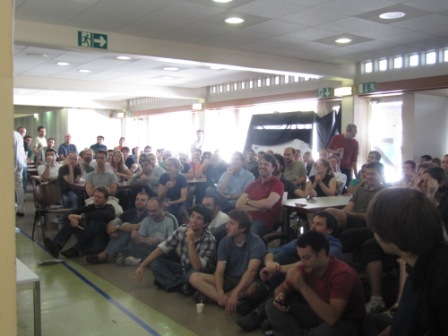 World Cup fans cram into the CERN cafeteria, even sitting on the floor, to get a seat where they can see the game.

Anyone watching the data from the past few weeks, however, will notice a bump that appears just to the right of the cash registers, near a satellite TV projector, between 4 and 5:30 pm. The bump appears again between 8:30 and 10 pm. The data points tend to remain rigid for most of the 90 minutes, with momentary displays of excited behavior.

CERN has always been a hub of international collaboration; a place where people from many nations come together for a single goal. It is said that in the CERN cafeteria, a visitor can hear ten languages being spoken over the course of one meal. During the past few weeks, national pride has hit a high, with the World Cup football (soccer) competition in full swing. Save for the Olympics, it is the only sporting event  where everyone at CERN has a home team to cheer for.

CMS physicist Dave Barney, who also handles outreach for the collaboration, confesses that people have had the games running on laptops during shifts in the control room. "Our philosophy is professionalism comes first and if there is any spare time to look at football then it is ok," said Barney in an email. "And in general (what I have seen) the matches might be on in the background - no-one is *just* watching them!

"Lots of us are REALLY into the competition," Barney continued. He wore his England jersey to work even after his home country's elimination. "Working in an international environment makes it quite fun in a way - lots of teasing! But it also makes you feel like a school kid, waiting for the embarrassment of facing your friends after a disastrous performance from your own team against theirs." 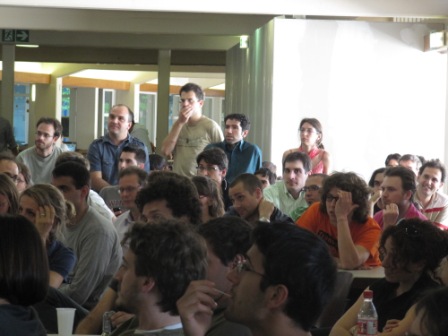 All eyes on the game.

"I did manage to catch America's third game, against Algeria. I was in a bar surrounded by Brits watching their game (against Slovenia) on a television, while a handful of Americans huddled around a laptop screen in 90 minutes of tense anticipation. The Brits had already won, but we were still tied 0-0. In the last couple minutes, though, America finally scored a goal. We went CRAZY, and you could see the Brits look over with something between disappointment and amusement. At any rate, everybody in the bar was thrilled that their team was progressing -- except one person, who was from Slovenia. America's victory had kicked his team out of the competition; you could actually hear his heart break. He finished his beer and snuck quietly away. Better luck next World Cup..."

As the World Cup enters the third round, and home countries are defeated, many people say they continue to cheer for other countries - perhaps those they once visited or lived in, or countries where colleagues are from. Some CERN members also admit that their World Cup loyalties come down to cheering against the team that eliminated their home country (though always with a wink and a smile, and never so seriously as to offend colleagues from those countries).

Matches today and tomorrow, July 2nd and 3rd, determine which teams will move onto the semi-finals. Still in the competition are CERN member states Spain, Germany, and the Netherlands -- which knocked Brazil out of the competition early today -- plus Argentina, Uruguay, Paraguay, and Ghana.