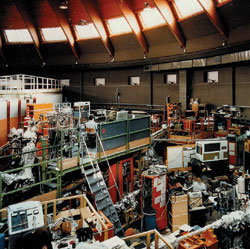 The BESSY I synchrotron-light source was originally operated at the Berlin Electron Storage Ring Company for Synchrotron Radiation. Image courtesy of BESSY.

But one hurdle looms particularly large in their path: They need to gather more than $24 million to complete the final section of the accelerator.

The collaboration has struggled to find the funds within its membership and has begun discussions in Europe and the United States, said technical director Amor Nadji in a talk at IPAC '10.

A synchrotron accelerator uses magnets to circulate electrons at almost the speed of light, creating a beam of bright ultraviolet and X-ray light. Scientists use beams from synchrotrons in materials science and biomedical applications. For example, biologists used a synchrotron light source to establish the double-helical structure of DNA.

The Synchrotron Light for Experimental Science and Applications in the Middle East, or SESAME, represents a rare example of cooperation between Bahrain, Cyprus, Egypt, Iran, Israel, Jordan, Pakistan, Palestinian Authority, and Turkey.

Young scientists from around the contentious region have been working side-by-side on construction of SESAME since 2003.

“The purpose is to try to use science for peace,” Nadji said.

Physicists Herman Winick, Gustav-Adolf “Gus” Voss, and others planted the seed for the project in 1997 when they proposed that Germany donate rather than scrap a recently decommissioned synchrotron called BESSY I.

As scientists in Germany began construction of the synchrotron’s successor, BESSY II, others packed the components of the original into crates and shipped them to a town near Amman, Jordan.

The process of fitting the pieces back together into a working accelerator has not been easy. Scientists have had to find replacements for parts built in the ‘70s and decipher notes handwritten in German. On top of that, most of those willing to work on SESAME are fresh out of school.

“Building an accelerator is not something you can learn in class,” Nadji said. “You need to go to the laboratory.”

More experienced scientists tend to go abroad to participate in projects with more stable funding, which offer higher salaries. Nadji grew up in Algeria but moved to France to complete his PhD. He worked at the Laboratoire pour l’Utilisation du Rayonnement Electromagnetique, or LURE, and more recently helped build the Soleil synchrotron near Paris. 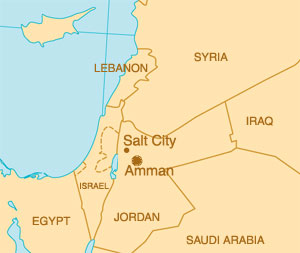 SESAME is located near Amman, Jordan.

Nadji said he enjoys the teaching aspect of his job at SESAME.

“These are inexperienced people,” he said. “But if they have confidence in you, it’s a very good atmosphere. Every day at the end of the day, I think I did something good because I told this one about a strategy he didn’t know or because I know that one can manage something on his own now.”

Despite their freshness, members of the SESAME collaboration are not content simply to rebuild the German synchrotron. They plan to upgrade the accelerator to run at 2.5 gigaelectronvolts, up from its original 0.8 GeV.

The improvement necessitates a storage ring about twice the size of the original and raises the cost of building the accelerator from its original estimate. But it will make SESAME competitive with other synchrotrons around the world, an important factor in attracting veteran scientists to use the machine.

Read more about the origins of SESAME in symmetry.

We’ve paired off eight elite kinds of magnets to battle for the win. Learn about each of the magnets then vote for your favorites in our Twitter polls (in thread).

How to defend a PhD remotely

Alyssa Frederick defended her thesis remotely before the coronavirus outbreak began. Here’s how.