Dark Matter: Can you hear me now? 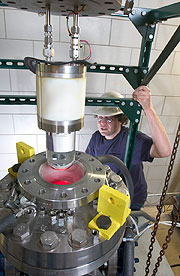 COUPP collaborator Andrew Sonnenschein checks on the 4kg bubble chamber in in the MINOS hall at Fermilab in 2005.

Pockets of dark matter litter roughly 25 percent of the universe like patches of static you hit while surfing the radio dial: definitely there but of unclear origin.

Through a process of elimination, Chicagoland Observatory for Underground Particle Physics collaborators say they have found a way to use sound to tune in dark matter passing through an underground bubble chamber and tune out imposter particles. This acoustic discrimination works if that dark matter consists of Weakly Interacting Massive Particles, or WIMPs, one of the leading theoretical candidates for this mysterious gravitational subatomic material.

Based on the theories of the makeup of WIMPs and data about how particles with similar masses and no electric charge behave, physicists can estimate the type of bubble and vibration noise that a WIMP would generate when striking the nucleus of a liquid particle in a detector. Unfortunately, in COUPP’s bubble chamber that simulated WIMP bubble looks much like the bubble caused by common alpha particles such as radon. These unstable particles decay emitting an alpha particle and a secondary particle that collide and causes a recoil like a battleship firing a large shell. Differentiating between these two particle interactions had researchers stymied until they learned to listen, not look.

Collaborators from Fermilab, University of Chicago and Indiana University at South Bend, targeted this last remaining particle that could mimic the nuclear recoil of a WIMP dark matter particle by listening to the sound vibrations its recoil causes. Program the detector to rule out that sound, collaborators decided, and any other recoil sound would likely signal the arrival of a dark matter particle.

This past winter that realization literally caused the jaw of COUPP collaborator Mike Crisler to drop when during a simple R&D test to get rid of radon noise in a 4kg bubble chamber showed that simulated WIMPS and alpha particles make distinctive noises.

“This is really one of the more stunning moments I have had at Fermilab,” Crisler said. “And I have been here for 30 years.”

When a charged particle zips through the liquid, it triggers boiling along its path, which is visible as a series of small bubbles. Scientists expect a WIMP to leave a single bubble in contrast to the multi-bubble tracks left by many other particles.

That deep ping, sounding somewhat like a submarine’s sonar, caused by a vibration at the edge of the bubble chamber was generated by pressure changes after a charged particle zipped through the chamber. It was a game-changing moment for COUPP and, the collaborators hope, for the search for dark matter.

Theorists predict the discovery of what particle composes dark matter within the next five to 10 years, and experiments across the globe are vying to claim that prize by creating unique and larger detectors.

How well these detectors “hear” could help determine who finds dark matter first. COUPP and the Italian experiment PICASSO located in SNOLAB in Canada, both make bubbles in super-heated liquid-type detectors, and listen for the indirect sound of vibrations from the particle collisions that cause the bubbles. The pair have been jockeying for leadership in the search for spin-dependent WIMPs, where the WIMPS' interaction depends on the spin of the nucleus of the particle with which it collides. PICASSO first initiated the use of sound to differentiate dark matter from alpha particles, but, at least for the moment, COUPP has made the most use of this tool.

During an initial four-month test in Fermilab’s 350-foot deep NUMI tunnel, COUPP validated the use of alpha discrimination and set new spin-dependent WIMP limits. At a Wine and Cheese lecture March 19 at Fermilab, COUPP collaborators highlighted these results.

The leaders in the search for spin-independent WIMPs are CDMS II, which records the direct sound vibrations in a detector in Minnesota, and XENON 100, which uses light and electric charge in its Italian detector. 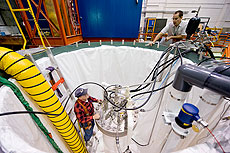 COUPP collaborators install a 60 kg bubble chamber for testing in the DZero building at Fermilab in September 2009.

tunnel and possibly relocate it to the 2-kilometer deep SNOLAB as early as fall. They hope to eventually partner with the PICASSO experiment.

"There have been concerns that even with its spectacular rejection of gamma and beta background, COUPP might always be limited by alpha background events," Crisler said. "But COUPP with robust alpha rejection has the potential to move well ahead of the competition."

It was PICASSO that gave COUPP the idea of using acoustic discrimination when it discovered in 2008 less noise from nuclear recoils from simulated WIMP particles than from alpha decays. The alpha decay emits both a recoil and an alpha particle, making it sound louder. PICASSO found the alphas produced vibrations that were roughly twice as loud, which can be seen as higher frequency signals in the detector readouts. COUPP got an even clearer signal when it adapted what PICASSO had done with its superheated gel droplets to COUPP’s water-like CF3I, a fire-extinguishing liquid. Looking for bubbles previously had ruled out most particles that could be confused for dark matter, and now, listening to bubbles has ruled out the last remaining potential imposter, the alpha particle.

A sound clip of an alpha bubble in the COUPP experiment.

A sound clip of a simulated WIMP bubble in the COUPP experiment.