Muons at the science fair

Katrina Korman was only 15 years old when she started working with physicist Alec Habig on a science fair project.  She knew almost nothing about particle physics and computer programming when she began. Yet she dared to take on the challenge of analyzing the steady stream of muons that bombards Earth. 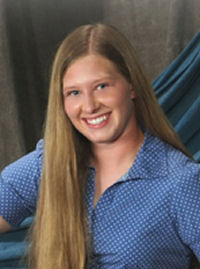 Korman isn't a physics whiz kid, says Habig. Google her name and you'll find more references to her pitching abilities than anything else. During her high school years, the Minnesota native filled her spare time with softball, tennis, volleyball, and hockey, two musical instruments, and activities with the National Honors Society.

When Korman entered her sophomore year, she was already a regular at the yearly science fair.  Twice she had presented the results of her experiments on how life in outer space might affect the growth of soybean plants. "At the time I think I wanted to work for NASA," she says. "That was my dream job."

Craving another project dealing with the cosmos, she asked her teacher Cynthia Welsh for a suggestion; Welsh set up a meeting with Habig, the director of graduate studies at the University of Minnesota Physics Department.

Habig, who regularly conducts outreach activities with nearby high schools, does research with a handful of physics experiments, including the Main Injector Neutrino Oscillation Search.  The MINOS experiment uses two giant particle detectors, one located at Fermi National Accelerator Laboratory in Illinois and the other at the Soudan mine in northern Minnesota, to study neutrinos.

The MINOS detector at Soudan is buried more than a half mile underground, where rock shields it from cosmic rays that hit Earth continuously. Nevertheless, some high-energy muons still manage to reach the detector, where they create significant static in the MINOS neutrino data.

But does the stream of muons vary over the course of a year?

Data gathered by many other particle physics experiments had hinted at seasonal fluctuations in the rate at which cosmic muons strike the Earth. Few scientists, however, had done a complete analysis to prove the existence of the effect or examined the fluctuations quantitatively.

This was the first time one of Habig's science-fair students would approach a real-life particle physics problem, providing results that he and his colleagues could use. Habig felt that the analysis of MINOS data would offer the right skill level for a high school student like Korman. Because he was fairly certain the analysis would have a positive result, he thought it would also prove fun and rewarding.

Starting from square one, Korman spent most of her summer learning how to write computer code while Habig taught her particle physics. He and her high school teacher offered support and assistance as Korman wrote a computer program to sift through MINOS data to look for seasonal muon fluctuations.

For Korman, this science fair project was a big departure from growing plants and watching their progress over weeks.

"With the soybeans you grow the plants and you take the measurements yourself and you put them in the graphs. With [the MINOS] project it's less hands-on," she says. "You feel like you're not getting anywhere until you see the results and then you're like, ‘Oh! That's neat!'"

Habig says Korman's greatest strength was simply her determination to finish the project.

"The thing that made it work very well was [Katrina] was very motivated and diligent and willing to sit down and learn apparently irrelevant stuff like programming and statistics," Habig says. "She's different from many physics majors who come in thinking a lot of stuff is really neat, and they are really surprised that it's a lot of work. So as a result, physics programs lose maybe half of declared majors. She wasn't necessarily a big fan of physics, but there was a project that was interesting and she wanted to do it and was willing to sit down and do the work to get it done." The MINOS particle detector, located a half mile underground in the Soudan Underground Laboratory in Minnesota, weighs 6000 tons.

The project gave Korman a close-up look at what particle physicists are doing. Habig took Korman on a tour of the MINOS detector at Soudan, and she and her father watched the launch of a weather balloon carrying instruments to measure atmospheric conditions to associate with the MINOS data on muons. These were the project's biggest highlights, she says.

Korman took her project to the regional science fair that fall and moved on to the state competition that spring. She'd successfully shown that there is indeed a fluctuation in the muon rate as the seasons change and the atmospheric conditions change.

After that year's science fair, the project was over for Korman. But her analysis became the basis for a Ph.D. thesis by Eric Grashorn, a graduate student working under Habig. He took Korman's work and went deeper, finding a way to calculate the quantitative fluctuations in muon showers during the year. To honor the work she'd done to get the ball rolling, the scientists included Korman as a coauthor on the paper.  (For more on this work and its significance, see "Cosmic Weather Gauges" in the March 09 issue of symmetry.)

Habig says he'll definitely consider doing a similar project with another student in the future. In the meantime, his work with Korman will provide a valuable example in his upcoming outreach efforts.

"When I'm talking to classes of undergraduates or high school students I try to put in a slide with pictures of students like them who have done work with neutrinos or cosmic rays in the past. And that makes [the new students] feel like this stuff is not off on another planet," Habig says. "Giving them some tangible evidence that other students like them have understood this stuff in the past makes them want to try harder to understand it."

And, as Habig points out, the project still achieved the ultimate goal of increasing one student's scientific literacy.

"Even if Katrina has nothing to do with science for the rest of her life, 20 years from now she'll pick up a newspaper and read a science story and she'll have a framework for it," Habig says.

Now, as Katrina prepares for her freshman year of college, she still isn't sure if science is the path she'll take. Even if she doesn't follow in Habig's footsteps and become a physicist, she thinks the experience taught her a great deal about her own abilities and where her interests lie. As part of her resume, the MINOS project even may have helped Katrina get into a good school.  This fall she'll attend the University of St. Thomas in St. Paul, Minnesota.

"The funny thing is, I've done all these science projects and I still just feel like I'm in over my head," says Korman. Would she recommend a science project such as this one to other high school students?  "Yes and no," she says. "You obviously have to know what you're getting into. You have to be prepared to feel like you don't know what's going on. But I think it would be good for kids to learn."