A handy guide to grids and clouds 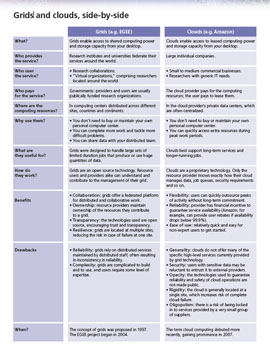 A chart in the new GridBriefing compares grids and clouds

For those interested in the relative merits of grid computing vs. cloud computing for handling humongous amounts of data, GridTalk has a new four-page briefing that offers a neat summary. It's written by Cristy Burne, former editor of International Science Grid This Week (thanks, iSGTW, for the tip!) and starts with the basics: Just what are we talking about here?

Both grids and clouds are very large collections of computers. In grids, such as the Open Science Grid in the United States, the computers are owned and shared by multiple users.  A cloud, in contrast, is generally owned by one entity--for instance, Amazon or IBM--that leases computing time to users.

There's been a lot of discussion about which system is the better choice for particle physics and other data-intensive science. In October we pointed to an analysis by Ignacio Martín Llorente of the Distributed Systems Architecture Research Group in Madrid arguing that the two technologies are different and complementary.

The new briefing has a chart comparing the two approaches--who offers them? how do they work? what are the benefits and drawbacks?--as well as brief commentaries from a variety of experts and links to more information.

Speaking of more info, here are links to symmetry articles on grid computing:

The Grid in 60 seconds
Meet the Grid (An introductory feature)
What is the Grid? (A conversation between some leading particle physics computer scientists)
Sciences on the Grid (Case studies of science being performed on existing grids)