Fermilab's Bill Higgins is an avid science fiction fan and an equally avid researcher. One result is a fascinating pair of articles in the current issue of symmetry: An essay explaining how the concept of antimatter--then known as "contraterrene matter"--made its way into science fiction, and a logbook featuring a yellowed page from the manuscript of a story by Jack Williamson.

His story, “Collision Orbit,” appeared in the July 1942 issue of Astounding Science Fiction under the pen name Will Stewart. In it, engineer Jim Drake struggles to exploit the energy of contraterrene asteroids by finding a way to manipulate them without touching them, using magnetic fields. (Read the logbook from this issue for more information.)

The accompanying logbook tells how Williamson wrote the story on a secondhand typewriter in a small, unpainted shack he had built on his family's ranch in New Mexico. 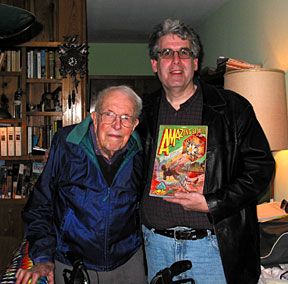 Jack Williamson, then 95, poses with Edelman and a copy of the December 1928 Amazing Stories magazine, which contains his first published story. Photo courtesy of Scott Edelman.

For those who want to see just how small that shack was, here are photos from a 2003 tour of the Williamson homestead, part of the 27th annual  Jack Williamson Lectureship at Eastern New Mexico University.   Williamson had been a professor of English there. The 2003 event celebrated not only his long career in writing and teaching, but also the 75th anniversary of the sale of his first short science-fiction story. Williamson kept on writing and publishing stories until his death at 98. Here we see him at the age of 95, schmoozing with fans and recalling the early days. Thanks to writer and editor Scott Edelman for this photographic trip back in time.