Can you predict Nobel Prize winners by counting citations? 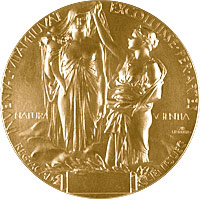 The Nobel Prize Medal for Physics and Chemistry

In this recently posted paper, Yves Gingras and Matthew L. Wallace analyze the bibliometrics surrounding the physics and chemistry Nobel Prize winners and nominees of the past 106 years. They were curious: Could we predict the winners of the upcoming Nobel Prizes on the basis of how often their work is cited by other scientists?

The answer turns out to be no.

In the first half of the 1900s, citations did have some predictive power. A scientist would make a crucial discovery and write a paper (or papers) about it in a scientific journal. Other researchers would then cite these results in their own publications. Just about the time the scientist's papers became the most heavily cited in the field, he or she would be awarded a Nobel.

In the last 30 years, however, it appears that physics--and chemistry as well--have become larger and more diverse, so that citations are spread among many seminal papers and researchers. Nobel laureates are no longer necessarily near the top of the citation rankings at the time of their awards.

In some sense this is like the "parity" many sports fans talk about. Making good predictions in an NCAA tournament bracket or fantasy football league can be pretty difficult, because there has been an increase in the number of high-quality players and teams. Further, the teams now must be compared across conferences or leagues. While Gonzaga might have won its conference tournament, it may not be strong compared to teams from the ACC, and the fifth-place team in the English Premier league might still win the European Cup. [Editor's note to taunt his English friends: How did the English do in the European Cup this year?]

Similarly, the Nobel committee must compare seminal research across sub-disciplines of physics that have different cultures and traditions when it comes to citing papers.  So citation counts don't have as much predictive power for the modern Nobel as they did when the disciplines were smaller and less diverse. Looks like we'll just have to wait and see.