Dispelling science stereotypes one single at a time 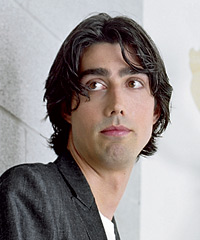 The crowd of Chicago singles perused their most eligible peers: a doctor, a clothing designer, a successful entrepreneur, a professional baseball player, a physicist...

Yup. Particle astrophysicist Mark Jackson stood in the swanky Museum of Contemporary Art surrounded by many of the city's rich and influential. While few people likely understood what he does for a living--study black holes and primordial ooze left over from the big bang--they did understand his nonacademic title: One of Chicago's top 10 bachelors.

"In our search for successful, interesting candidates, some professions pop up year in and year out (doctors, lawyers, etc.), but we are always on the watch for people whose success is defined by more than just salary," said Chicago Magazine editor Jennifer Wehunt "Mark revealed himself to be a down-to-Earth, funny, good-hearted guy."

Jackson was selected as one of 10 men and 10 women ranked 2008 Most Eligible Singles in the magazine's July issue. Hundreds of people paid for a chance to meet the certified good catches last month at a fund-raiser for Northwestern Memorial Hospital's prostate cancer gene therapy program at the museum.

Jackson got interested in the list when he attended the charity event previously and noticed none of the top singles had science backgrounds. He thought having a scientist on the list of would make the public think twice before they write off science as uncool.

"Scientists are very passionate about majestic problems like what the universe is made of or why things work at a very fundamental level, and it is sometimes it is sometimes difficult to communicate these deep ideas to the general public. It's not like being an athlete or rock star, where everybody understands and admires the overall objective even if they don't happen to be talented at it themselves. I think this is probably the reason we sometimes have a reputation for being antisocial, but in reality it's just the opposite: scientists' intelligence, sincerity, and sensitivity would make them ideal companions."

Is he willing to get that message across to Chicago's females one at a time?

"Just the single ones," he said with a grin.

When he's not getting magazine play to score dates, Jackson works outside the limelight to try and dispel stereotypes that discourage students from entering scientific fields. He has lectured to students on weekends at Fermilab, served as a high school mentor and science fair judge, and is part of the Fermilab Ask-A-Scientist program. He finds many people have preconceived notions of scientists--until they meet one.

Several US and European studies have shown positive interactions with scientists or science can chip away at negative stereotypes. A 2006 study (PDF) by Susan Losh of Florida State University on American stereotypes about scientists found that the percentage of adults who considered scientists as "odd" dropped from 35 percent in 1983 to 25 percent in 2001. The improved image was attributed to positive portrayals of science in the media, exposure of students to real scientists, and recent scientific accomplishments that engage everyday people.

He doesn't consider himself an oddity in the scientific field.

"I think there is just a misperception of the field," Jackson said. "The people that make it to senior levels as scientists have to be socially adept and interesting, and many are athletic and attractive. They have to work in international groups and have to engage the interests of college students. Physicists aren't what they think: a cranky old man with a beard and bowtie."

OK, so physicists can be outgoing, good looking, and fun, but do they also have a sense of humor? You'll have to judge for yourself.

When the magazine requested Jackson write up a statement about himself, he adopted a Harlequin Romance style and wrote a one-page conversation between himself and a hypothetical date. Here's an excerpt.

"It's hard to imagine you're still single," Veronica muttered breathlessly as Mark pulled her closer.

"But ... it's just so hard. My job as a physicist at the Fermi National Accelerator Laboratory doesn't leave me much time for socializing, and it's tough to meet someone that you really connect with. I research the big bang, grand unification theories and black holes, but there's still a black hole in my heart that I long to fill."