Pier Oddone has a posse 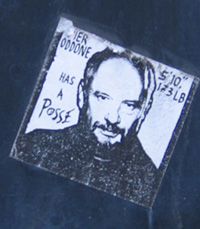 A few months ago, two-inch by two-inch stickers containing the likeness of Fermilab Director Pier Oddone and the words "Pier Oddone has a posse" were found in the Wilson Hall parking lot, the elevators, and other inconspicuous areas.

The strategically placed stickers are a spinoff of a mid-1980s street art campaign featuring Andre the Giant. Originally begun as sort of an inside joke, the stickers were later disseminated by the skater community and became a curious phenomenon done just to get people talking about it. Later spinoffs were created to show support of a theory or a personality, including Darwin and the process of evolution.

Oddone was flattered when notified of the sticker art.