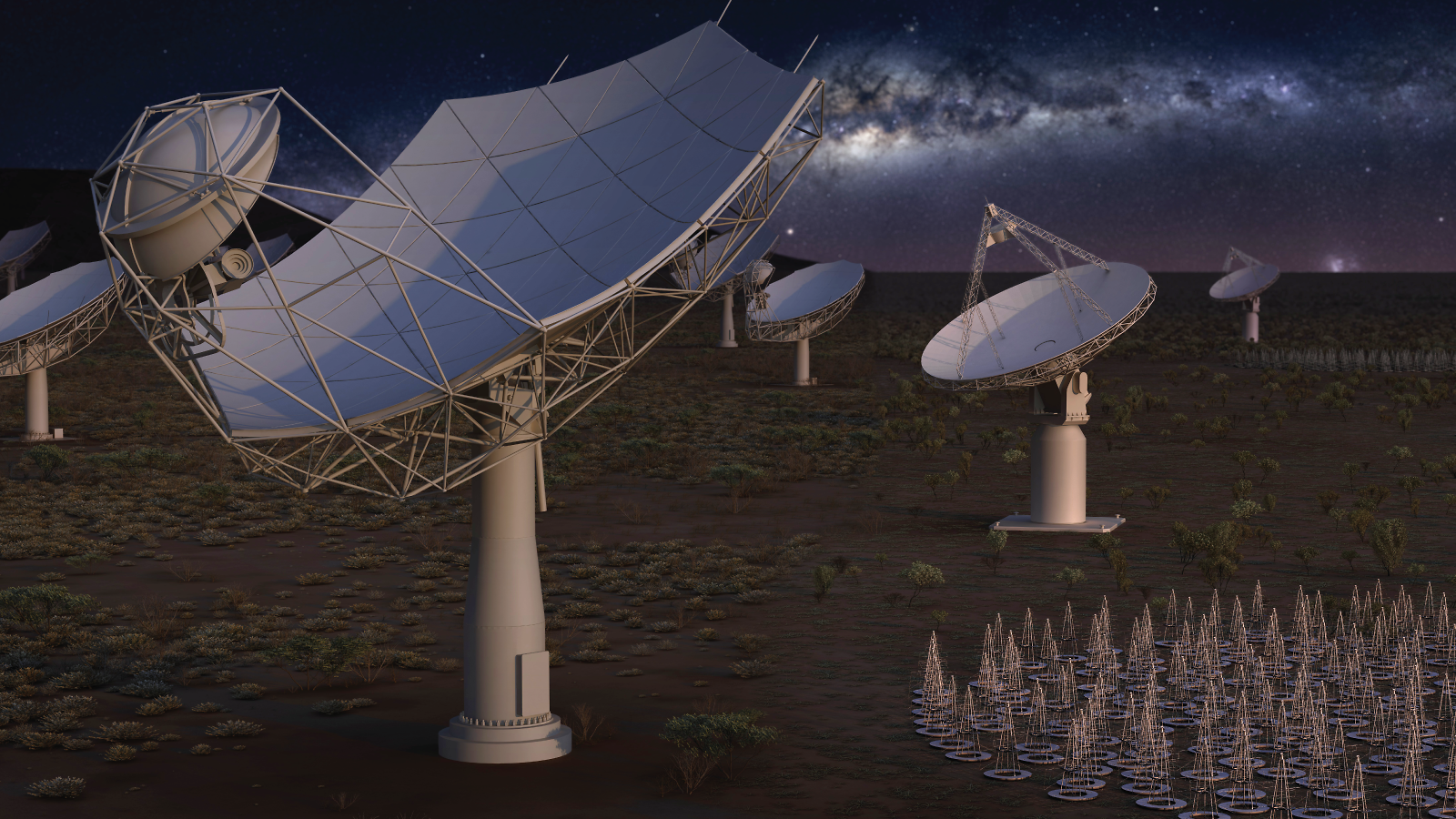 When you think of radios, you probably think of noise. But the primary requirement for building the world’s largest radio telescope is keeping things almost perfectly quiet.

Radio signals are constantly streaming to Earth from a variety of sources in outer space. Radio telescopes are powerful instruments that can peer into the cosmos—through clouds and dust—to identify those signals, picking them up like a signal from a radio station. To do it, they need to be relatively free from interference emitted by cell phones, TVs, radios and their kin.

That’s one reason the Square Kilometer Array is under construction in the Great Karoo, 400,000 square kilometers of arid, sparsely populated South African plain, along with a component in the Outback of Western Australia. The Great Karoo is also a prime location because of its high altitude—radio waves can be absorbed by atmospheric moisture at lower altitudes. SKA currently covers some 1320 square kilometers of the landscape.

Even in the Great Karoo, scientists need careful filtering of environmental noise. Effects from different levels of radio frequency interference (RFI) can range from “blinding” to actually damaging the instruments. Through South Africa’s Astronomy Geographic Advantage Act, SKA is working toward “radio protection,” which would dedicate segments of the bandwidth for radio astronomy while accommodating other private and commercial RF service requirements in the region.

“Interference affects observational data and makes it hard and expensive to remove or filter out the introduced noise,” says Bernard Duah Asabere, Chief Scientist of the Ghana team of the African Very Long Baseline Interferometry Network (African VLBI Network, or AVN), one of the SKA collaboration groups in eight other African nations participating in the project.

SKA “will tackle some of the fundamental questions of our time, ranging from the birth of the universe to the origins of life,” says SKA Director-General Philip Diamond. Among the targets: dark energy, Einstein’s theory of gravity and gravitational waves, and the prevalence of the molecular building blocks of life across the cosmos.

SKA-South Africa can detect radio spectrum frequencies from 350 megahertz to 14 gigahertz. Its partner Australian component will observe the lower-frequency scale, from 50 to 350 megahertz. Visible light, for comparison, has frequencies ranging from 400 to 800 million megahertz. SKA scientists will process radiofrequency waves to form a picture of their source.

A precursor instrument to SKA called MeerKAT (named for the squirrel-sized critters indigenous to the area), is under construction in the Karoo. This array of 16 dishes in South Africa achieved first light on June 19, 2016. MeerKAT focused on 0.01 percent of the sky for 7.5 hours and saw 1300 galaxies—nearly double the number previously known in that segment of the cosmos.

Since then, MeerKAT met another milestone with 32 integrated antennas. MeerKat will also reach its full array of 64 dishes early next year, making it one of the world’s premier radio telescopes. MeerKAT will eventually be integrated into SKA Phase 1, where an additional 133 dishes will be built. That will bring the total number of antennas for SKA Phase I in South Africa to 197 by 2023. So far, 32 dishes are fully integrated and are being commissioned for science operations.

On completion of SKA 2 by 2030, the detection area of the receiver dishes will exceed 1 square kilometer, or about 11,000,000 square feet. Its huge size will make it 50 times more sensitive than any other radio telescope. It is expected to operate for 50 years.

SKA is managed by a 10-nation consortium, including the UK, China, India and Australia as well as South Africa, and receives support from another 10 countries, including the US. The project is headquartered at Jodrell Bank Observatory in the UK.

The full SKA will use radio dishes across Africa and Australia, and collaboration members say it will have a farther reach and more detailed images than any existing radio telescope.

In preparation for the SKA, South Africa and its partner countries developed AVN to establish a network of radiotelescopes across the African continent. One of its projects is the refurbishing of redundant 30-meter-class antennas, or building new ones across the partner countries, to operate as networked radio telescopes.

The first project of its kind is the AVN Ghana project, where an idle 32-meter diameter dish has been refurbished and revamped with a dual receiver system at 5 and 6.7 gigahertz central frequencies for use as a radio telescope. The dish was previously owned and operated by the government and the company Vodafone Ghana as a telecommunications facility. Now it will explore celestial objects such as extragalactic nebulae, pulsars and other RF sources in space, such as molecular clouds, called masers.

Asabere’s group will be able to tap into areas of SKA’s enormous database (several supercomputers’ worth) over the Internet. So will groups in Botswana, Kenya, Madagascar, Mauritius, Mozambique, Namibia and Zambia. SKA is also offering extensive outreach in participating countries and has already awarded 931 scholarships, fellowships and grants.

Other efforts in Ghana include introducing astronomy in the school curricula, training students in astronomy and related technologies, doing outreach in schools and universities, receiving visiting students at the telescope site and hosting programs such as the West African International Summer School for Young Astronomers taking place this week.

Asabere, who achieved his advanced degrees in Sweden (Chalmers University of Technology) and South Africa (University of Johannesburg), would like to see more students trained in Ghana, and would like get more researchers on board. He also hopes for the construction of the needed infrastructure, more local and foreign partnerships and strong governmental backing.

“I would like the opportunity to practice my profession on my own soil,” he says.

That day might not be far beyond the horizon. The Leverhulme-Royal Society Trust and Newton Fund in the UK are co-funding extensive human capital development programs in the SKA-AVN partner countries. A seven-member Ghanaian team, for example, has undergone training in South Africa and has been instructed in all aspects of the project, including the operation of the telescope.

Several PhD students and one MSc student from Ghana have received SKA-SA grants to pursue further education in astronomy and engineering. The Royal Society has awarded funding in collaboration with Leeds University to train two PhDs and 60 young aspiring scientists in the field of astrophysics.

Based on the success of the Leverhulme-Royal Society program, a joint UK-South Africa Newton Fund intervention (DARA—the Development in Africa with Radio Astronomy) has since been initiated in other partner countries to grow high technology skills that could lead to broader economic development in Africa.

As SKA seeks answers to complex questions over the next five decades, there should be plenty of opportunities for science throughout the Southern Hemisphere. Though it lives in one of the quietest places, SKA hopes to be heard loud and clear.