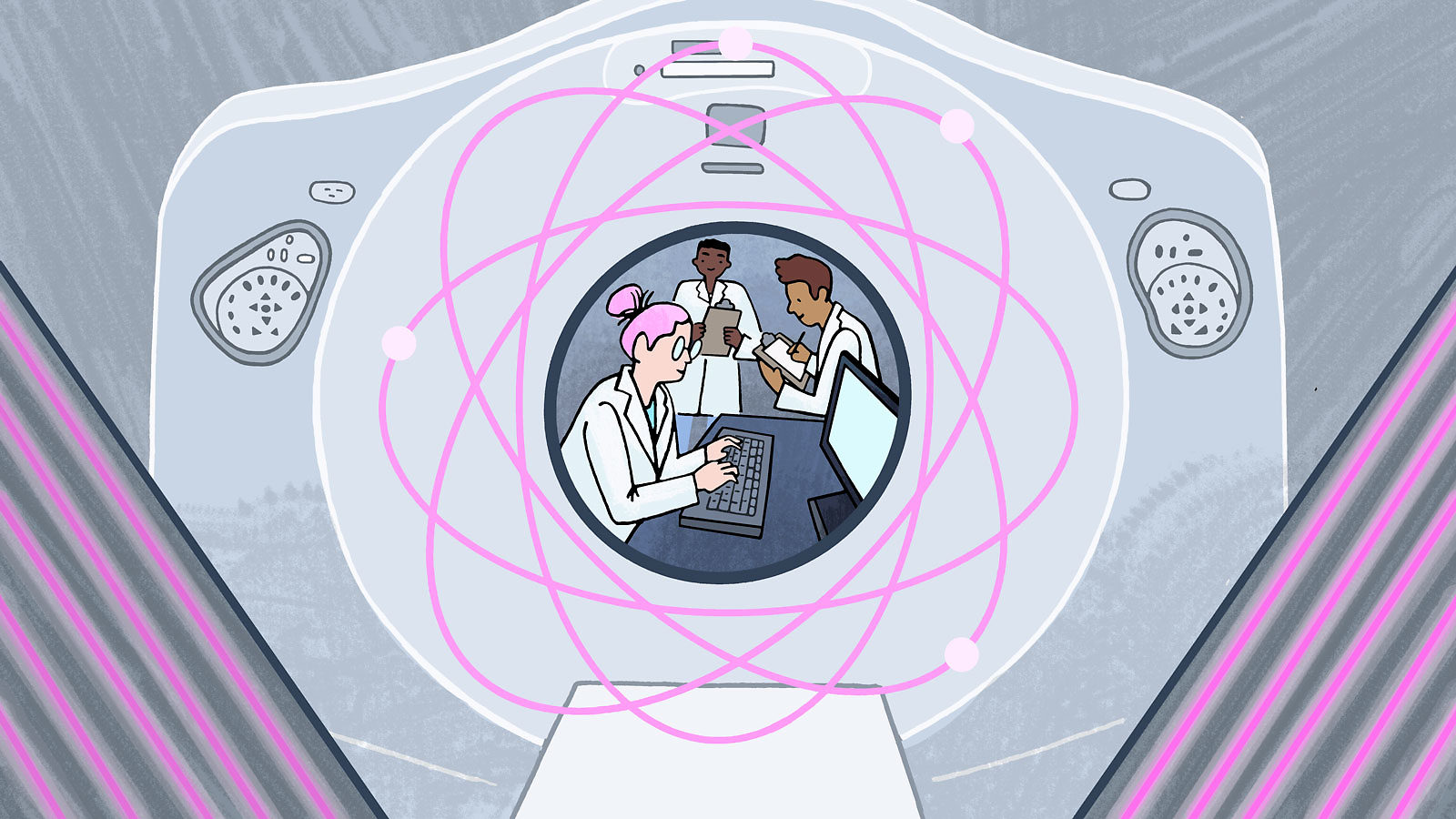 “I wasn’t one of those people who grew up knowing that they wanted to be a scientist,” says Jennifer Pursley.

Pursley found her way to physics through enthusiastic and supportive instructors. She conducted research in experimental atomic, nuclear and particle physics before finally discovering medical physics.

Medical physicists use their knowledge of physics to develop and improve medical diagnoses and treatments. Some medical physicists create better and safer radiation therapies for cancer patients, others more accurate imaging technologies. Some work exclusively in radiation protection as health physicists, a profession often (but not always) distinguished from medical physics.

Many particle physicists and astrophysicists like Pursley have transitioned into medical physics, taking a variety of paths to get there. To learn more, Symmetry writer Catherine Steffel spoke with five individuals, ranging from those still in training to established professionals, who entered medical physics at different stages in their careers. 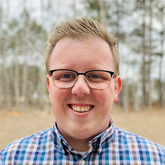 Education: BS in mathematics from Tennessee Technological University; MS in theoretical particle astrophysics from North Carolina State University, both in the United States

How he came to medical physics: I finished my coursework and written PhD qualifying exams and was only doing research when I thought, is research something I want to do long-term? I started looking into other options. I had heard of medical physics, but I didn’t know what it was. I started talking to people and meeting with people.

My main love is still research. I considered just doing a certificate program and looking for a residency, but it wasn’t going to cost me much time to make the switch [to a medical physics PhD].

Most surprising part of the job: Seeing the broad reach of a field that’s almost unrecognized. I’m surprised that I didn’t hear about it before.

Whether he misses astrophysics: Sure, but it’s one of those things where I know I’m going to love either one, and I’d miss the other.

Future plans: I plan to do a clinical residency and become board-certified.

Advice for future medical physicists: Know yourself well. In physics, it’s like everything and everybody outside is less than. If you really enjoy something and you see yourself fitting in better somewhere else, don’t let that stigma or what people think change that. 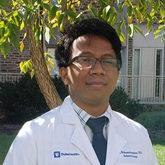 How he came to medical physics: Every two years, scientists from the US, Europe and Africa hold the African School of Physics, where selected students from underdeveloped countries, such as Madagascar, meet for a month of training. That’s how I discovered experimental particle physics and medical physics.

Two years later, I got an offer for the Fermilab International Fellow Scholarship. I thought that I could switch to medical physics while doing experimental particle physics research, but it didn’t happen that way. After I was accepted to the medical physics certificate program at Wayne State University, I did research at Henry Ford Health System on the MRLinac while taking classes. Doing those simultaneously made the transition relatively easy.

Most challenging part of going into medical physics: As an international student, I had a lot of questions and had to second-guess everything. I worked really hard to come to the US, and now I want to share my experience with my students. Maybe that saves them half a year, you know?

Most rewarding part of the job: I do the same amount of coding as I did in experimental physics, except the input data and output goal are different. It’s very rewarding because I’m doing physics like I’ve done all my life, but now someone benefits immediately.

Future plans: Become an ABR-certified academic clinical physicist. The more time you spend in the clinic, the more you want to improve things, and improvement requires research. I also want to work together with people to bring medical physics to my country, like I did with high-energy physics.

Advice for future medical physicists: Be prepared to humble yourself. When I finished my PhD with my friends, they went into post-doc while I went back to class. Also, be patient. If you want to have a good future, you have to invest in what you have right now. 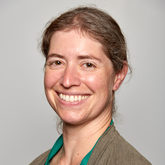 Education: BS in physics from Gonzaga University; MA and PhD in physics from Johns Hopkins University; postdoctoral research position at the University of Wisconsin-Madison; post-graduate certificate in medical physics and residency in the Harvard Medical Physics Residency Program, all in the United States

How she came to medical physics: Going from particle physics to medical physics is not as common as it used to be. Now that we have medical physics graduate programs, more people will be coming from that pathway. But my progression since residency is pretty typical for an academic clinical physicist in the United States.

I did two summer Research Experiences for Undergraduates programs, one in atomic and the other in nuclear physics. Job prospects pushed me to the thing that seemed most similar to nuclear physics, which was particle physics. By the end of my second year of post-doc, I wanted a job that was more satisfying, in the sense of having an immediate impact.

Most challenging part of the job: Balancing responsibilities. It’s easy to let clinic take all of your time because it’s satisfying and there’s always something to do. I really had to figure out what I wanted and how to balance clinical work and research.

On the job: My clinical responsibilities have shifted. As a resident, I learned how to do treatment planning and machine QA. As a junior physicist, I did that stuff. Now, I’m moving into a leadership, mentoring, and teaching role and spending more time on research.

What she misses about particle physics: I miss having a big, collaborative group. Medical physics research often happens in a vacuum, since every institution has different software environments and commercial products. The field is starting to realize this is an issue, but there’s a long way to go.

On the future of the field: Early on, research was primarily technology development. More recently, it’s software driven. Now, I see research going in two directions. There’s big data, artificial intelligence, and machine learning, which I think will provide some efficiency savings. There’s also radiation biology, which I’m most interested in. Namely, how do we personalize treatments, rather than just saying, “Because this works for most people, that’s what everyone gets”? Physicists can tease out information from data we already have.

Advice for future medical physicists: Make sure you will enjoy whatever field you go into. Talk to people who are in the field, and if they’re people who have come from your current field, even better. 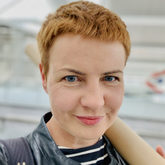 How she came to medical physics: My theoretical [particle physics] research—for long-baseline neutrino experiments—became very demotivating because whatever came out of my project, it would be decades before anybody built the experiments. I applied to a couple of medical physics positions by chance, and I started doing research after I worked at a hospital in Denmark for about three months.

In Denmark, you train for three years and complete modules that combine self-study, on-the-job training, and official courses. A training supervisor signs off on your progress reports, which are then approved by a central board.

In contrast, training in the UK is directly connected to the university with on-the-job training, modules, an MSc [master of science] project, and a final review [exam]. In both Denmark and the UK, we are registered, not board-certified like in the US.

On the job: Clinically, I’m in radiotherapy treatment planning. From a research perspective, I’m interested in reducing and predicting side effects of treatment. I also work on optimizing when we deliver a second course of radiotherapy.

Similarities between particle and medical physics: You have large amounts of messy data that you need to clean and analyze.

Most rewarding part of the job: You get to use your high-level skills, all your intellectual capacity, on something that matters.

Most challenging part of the job: Because I’m not a clinician, I’m always relying on other people, which is amazing but also super frustrating at times. Sometimes I wonder if I can do an MD part time! 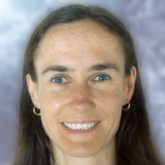 Education: MS (or BS, depending on who you talk to) in physics from the Czech Technical University; PhD from McGill University in Canada; postdoctoral research position at Stanford University in the United States

On the job: My ideal job would be a mix of clinical and research, which is why I pursued board certification, but when I moved to Canada, I could only do academic work and research because of my visa. After I got permanent residency, I had my daughter and wanted to spend time with her. So, right now, I do not do clinical work or use my board certification.

I am an assistant professor and a Canada Research Chair, which gives me a decreased teaching load. I supervise four graduate and two undergraduate students in my lab, the X-ray Cancer Imaging and Therapy Experimental (XCITE) lab, and I’m on too many committees. Saying “no” is increasingly important to me.

Differences between particle and medical physics: I had to rely on too many people to make progress on ATLAS, to the point where I wasn’t sure I would finish my PhD. In medical physics, we are the only ones responsible for a project, and it’s on us whether or not we finish.

Most surprising part of the job: The composition of conference attendees. I was used to being the only woman and one of the few young people at conferences. When I went to my first medical physics conference, the energy was very different—there were lots of young people, lots of women, and they were presenting.

Most rewarding part of the job: Supervising students. I graduated my first two students this year.

Another rewarding part of the job: Every new idea we have is beneficial. It would be great if more people were coming to medical physics from high-energy physics and fields like engineering. In Czech, we have a saying that “the bread will not be cheaper.” A discovery or new treatment modality won’t make the bread cheaper, but you will be saving patients’ lives or improving their quality of life.

Future plans: The minimum goal I have is to get my students good positions. I have a proposal on FLASH radiotherapy with TRIUMF. We don’t know whether our work will be clinically translatable, but we’ll see if we can make a difference.

An accelerator-driven form of carbon dating advances everything from archaeology to personalized medicine.