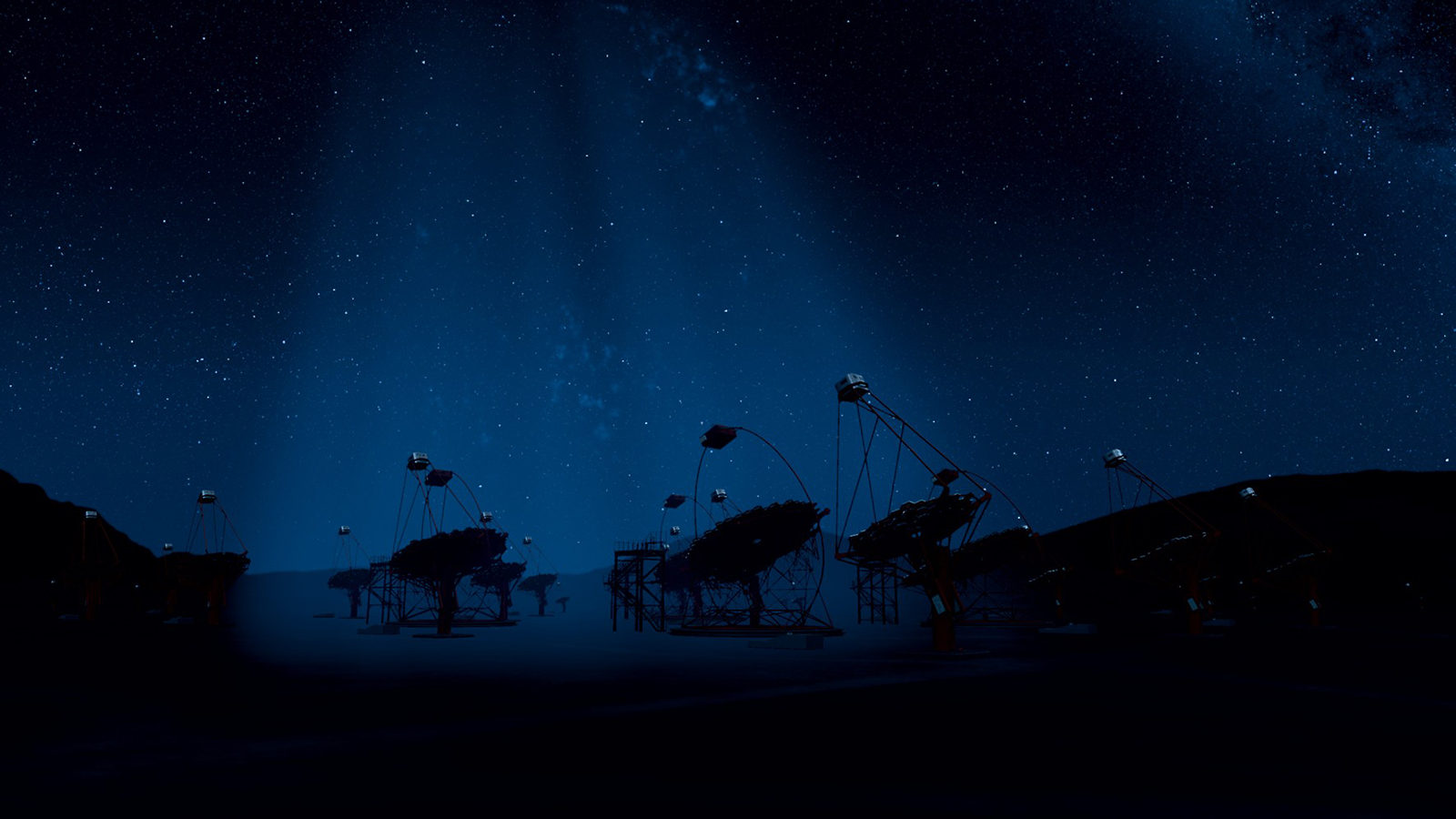 The next gamma-ray eye on the sky

Scientists have successfully tested the first prototype camera for the Cherenkov Telescope Array.

This is possible thanks to what all of these cosmic objects have in common: They are all sources of high-energy gamma rays. VERITAS, HESS and MAGIC all look for the optical light produced when those gamma rays interact with Earth’s atmosphere.

One gamma-ray source that continues to elude these powerful telescopes is the brightest electromagnetic event known to occur in the universe: a gamma-ray burst. But a new telescope array currently under development might be able to catch one.

The Cherenkov Telescope Array, or CTA, will cover a substantially larger area on the ground, making it an enormous “bucket” to collect incoming gamma-ray-produced radiation. It will also be able to collect data during almost twice as many hours per year as current arrays.

The array will study the entire range of gamma-ray sources. It also has the capability to detect the annihilation signature of dark matter particles.

Scientists successfully operated the first CTA prototype camera in late November. The full array is scheduled to start running in the 2020s.

The usefulness of gamma rays

Gamma rays are almost ideal messengers of high-energy particle astrophysics. They are created in the most energetic processes in the universe. And, like all other forms of light, they are electrically neutral and thus aren’t buffeted by galactic magnetic fields as they travel through space. This means scientists can use them to point back to their sources.

The drawback is that these messengers can’t make it through Earth’s atmosphere. Instead, they interact and produce a shower of lower-energy particles.

If some of those are traveling at a velocity faster than the speed of light in the gaseous medium of the atmosphere, they will create flashes of light peaking between blue and ultraviolet, akin to a sonic boom following a supersonic jet. This light is called Cherenkov radiation, and it’s what ground-based high-energy gamma-ray telescopes actually detect.

VERITAS in Arizona, HESS in Namibia, and MAGIC on the Canary island of La Palma are arrays of optical telescopes that have been detecting this light for about a decade. VERITAS contains four of these scopes, HESS has five, and MAGIC has two. The weak light reflects off each segmented primary mirror and is funneled to a “camera.” Each telescope’s  camera is made of hundreds to thousands of photomultiplier tubes which convert the incoming photons into electrical signals.

With the next-generation CTA, scientists hope to catch a gamma-ray burst with a ground-based telescope array for the first time. They want to know the underlying physics of these blasts, the sources of which are thought to be located millions to billions of light-years away.

Scientists have seen gamma-ray bursts with space-based instruments, such as the Fermi Gamma-Ray Space Telescope and Swift. But only a ground-based array could detect their highest-energy gamma rays, those above 100 billion electronvolts. And a large ground-based array such as the CTA, which will cover 10 square kilometers in the south and 1 square kilometer in the north, would be able to capture much more information.

An international consortium of nearly 1300 researchers from 31 countries is working toward building the CTA. The array will focus on a wider gamma ray energy range than the currently operating instruments—seeing between 20 billion electronvolts and 300 trillion electronvolts—and will do so with 10 times the sensitivity.

The CTA will consist of two detection sites on Earth, one in each hemisphere. At Cerro Paranal in Chile's Atacama Desert, approximately 100 telescopes spread across an area of about 10 square kilometers will scan the Southern sky. On the Spanish island of La Palma, some 19 telescopes will watch the Northern sky. The CTA Observatory is in the final negotiations with representatives from both locations to finalize the agreements to host the arrays.

The 70 small telescopes will use new detectors made of silicon. These have several advantages over the current design, says University of Oxford graduate student Andrea De Franco, “but the most sexy for us is they can resist bright night-sky background.”

That means they can detect Cherenkov light even in bright moonlight, something VERITAS, HESS and MAGIC cannot do. This new technology will let the CTA observatory operate for about 16 to 17 percent of the hours in a year; current arrays can observe during only about 10 percent.

CTA is in the development phase right now, meaning the consortium members are developing and testing the hardware, verifying how to deploy and operate the instruments, and simulating the best layout of those telescopes at each site.

Two medium-sized telescope prototypes are also under construction: A two-mirror design with a 10-meter primary mirror is being built in southern Arizona; a prototype of a single-mirror, 12-meter-wide design is in testing in Berlin, and its camera is nearly complete.

De Franco has spent the last two years building and testing the camera for the Paris-based prototype in addition to helping commission it before the inauguration. On November 26, he and his colleagues proved the design was working—even with the City of Light nearby. The camera recorded Cherenkov light, making it the first CTA prototype fully working and observing.

De Franco says it’s more likely that the light was part of a particle shower caused by an incoming cosmic ray rather than a gamma ray. But even if it was, this detection marked yet another step forward along the path to build science’s next gamma-ray eye scouring the sky.

The next step will be to construct and deploy the pre-production telescopes at the actual array sites.

“Ideally, [each of these] is identical to the final production telescope,” says CTA Project Manager Christopher Townsley. “It’s just that we will always learn something from putting it in the desert.”

Members of the CTA project expect to begin this phase in spring 2017, depending on the availability of funding.

Once the pre-production telescopes are operational, data collection can begin, though it won’t be anywhere near the quality expected from the full observatory. According to the current timeline, most of the telescopes at both arrays will be complete in 2020 or 2021.

At that point, the data will surpass what today’s best gamma-ray instruments can obtain. And CTA will only get better from there.