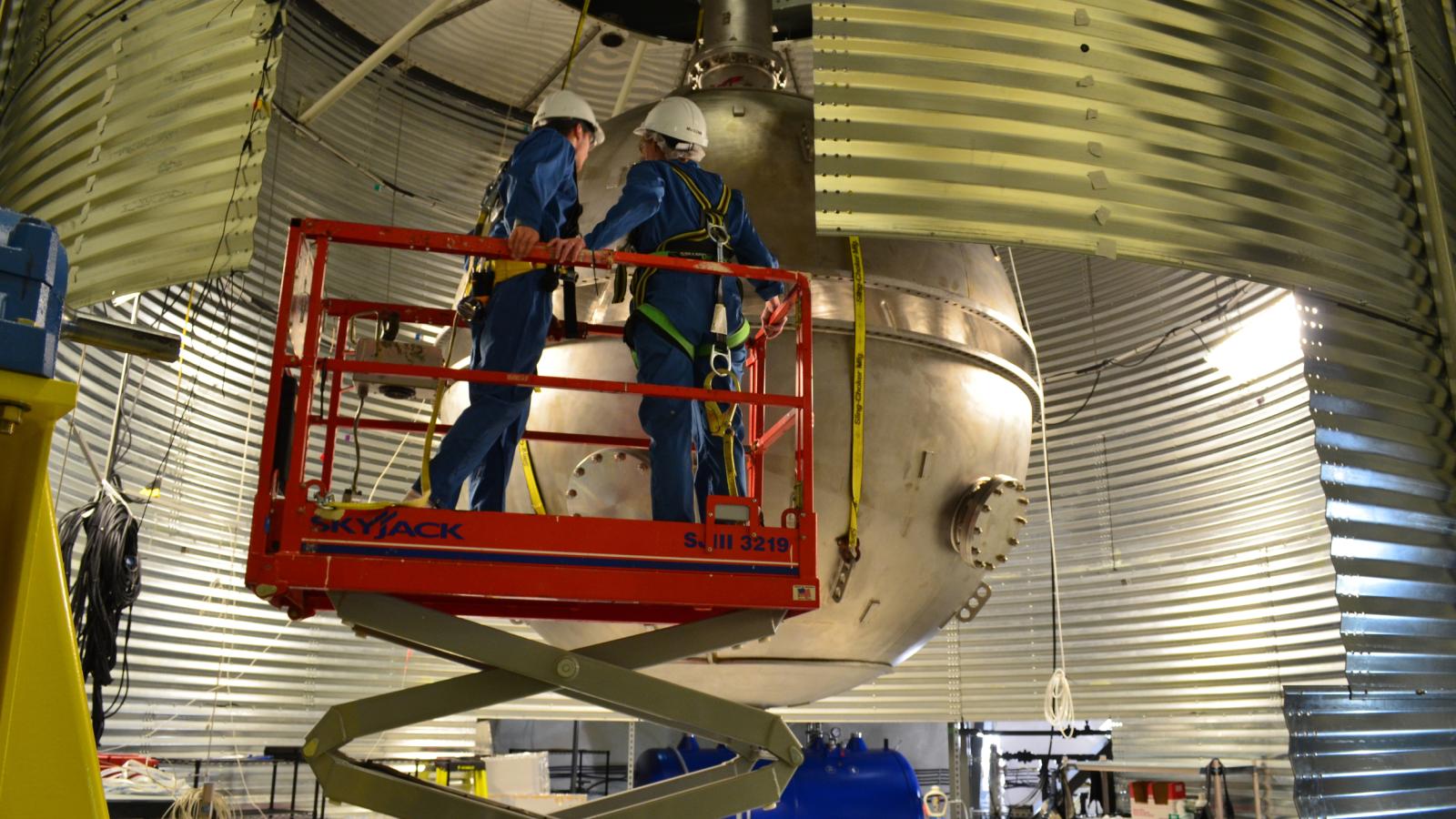 After entering through a long, airtight neck into the interior cavity, which is about 2 meters wide, the robot extended two arms and shaved half of a millimeter off the entire interior surface.

The robot’s purpose was to remove any radon the sphere might have absorbed during 18 months of underground assembly at SNOLAB near Sudbury, Ontario. Radon, an element that comes from the radioactive decay of uranium in soil, rock and water, would contribute to background noise—particle interactions that can obscure the phenomenon researchers are hunting for.

The resurfacer was just one piece of DEAP experimenters’ aggressive agenda to eliminate interference in what will be the world’s most sensitive dark matter detector for high-mass, weakly interacting dark matter particles when it begins taking data in March 2015.

When the DEAP experiment starts, researchers will watch 565 imperial gallons (680 US gallons) of liquid argon contained within a detector for flashes that could mean the first direct detection of dark matter.

Scientists think dark matter is made up of invisible particles that neither absorb nor emit light. Because dark matter interacts very weakly with other matter, it is likely passing through us all of the time. But every once and a while, a dark matter particle might run into something—and scientists hope that thing is inside a dark matter detector.

In theory, a collision with a dark matter particle should send an argon nucleus recoiling. In the DEAP-3600 detector, some of that energy should be released as a flash of ultraviolet light.

“What fundamentally makes the experiment difficult is trying to filter out billions and billions of background interactions from maybe one or a handful of dark matter interactions,” says Mark Boulay, DEAP’s project director and a professor at Queen’s University in Ontario.

The DEAP collaboration is taking the typical experimental precautions to block extraneous particles from cosmic rays, radon and neutrons. They sealed DEAP-3600 in a steel shell, submerged the entire assembly in water and will conduct the experiment deep underground. But that couldn’t block two particularly distracting particles from the outside: electrons and gamma rays.

Boulay studied the way electrons and gamma rays interacted with the argon and developed a non-physical filter. A true nuclear recoil, he found, takes the energetic blow quickly and releases a sharp spike of light in return. But the pulse of light resulting from an electron or a gamma ray is more diffuse, especially in argon. Researchers are using that distinction, which Boulay calls pulse shape discrimination, as a keystone in DEAP’s ability to eliminate background.

Another major source of background comes from neutrons and alpha particles from radioactive decay. Consequently, the DEAP collaboration has made a point to remove even mildly radioactive materials from their detector—hence the robotic radon-remover.

But that was only the final step in a series of measures designed to keep radon at bay. Chris Jillings, a SNOLAB researcher and adjunct professor at Laurentian University, played a key role in ensuring that radon exposure was controlled during the entire manufacturing process of plastic acrylic components closest to the liquid argon: the detector’s inner shell and light guides.

Jillings spent weeks traveling back and forth from Canada to Thailand as part of a team studying their supplier’s acrylic production techniques and quality control protocols. He visited where the acrylic was formed, surveyed the petrochemical plant that made the raw materials, and even inspected the delivery trucks.

“We did a detailed radon budget of how much exposure to radon the acrylic had at each step in the manufacturing process,” Jillings says.

“With close cooperation with our vendor—and time and effort—we were able to make sure that the radon load in the acrylic was very small.”

DEAP-3600 will take data for three years. Researchers hope they have eliminated enough background to find the signal that has eluded everyone so far.

“[Dark matter] outweighs normal matter by five to one, it makes up most of the stuff out there, and we’ve never seen it,” Boulay says “And it’s exciting to me that we’re just on the verge of possibly seeing this for the first time.”