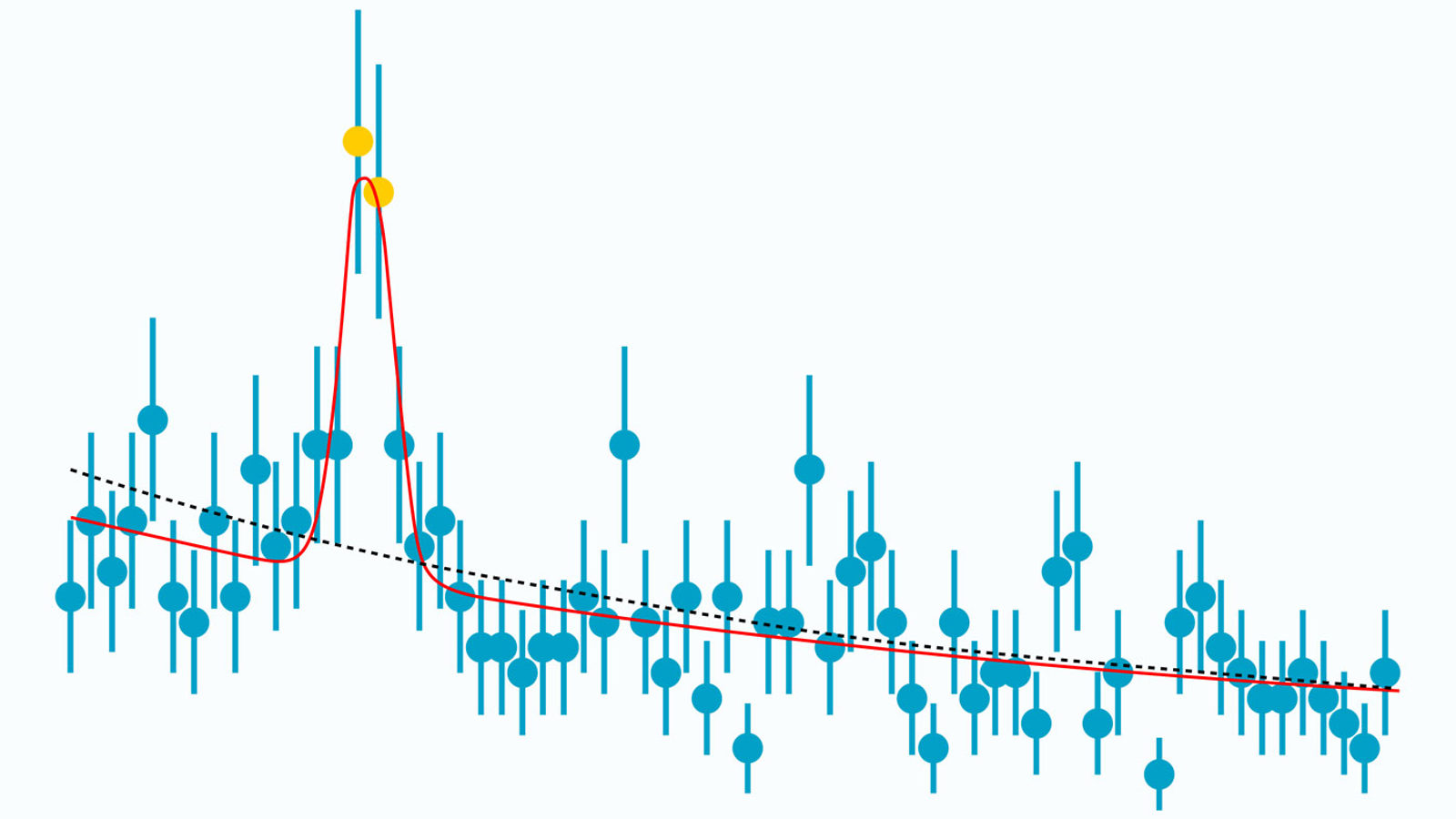 Although initial results were encouraging, physicists searching for an exotic five-quark particle now think it probably doesn't exist. The debate over the pentaquark search shows how science moves forward.

Editor's note: Scientists at the LHCb experiment announced the discovery of the pentaquark on July 14, 2015.

Experiments that first hinted at signs of a pentaquark produced graphs like the one shown. The peak seemed like it might be the signal for a pentaquark but determining whether it was a random fluctuation or a real signal required more data collection.

Three years ago, research teams around the world announced they had found data hinting at the existence of an exotic particle containing five quarks, more than ever observed in any other quark-composite particle. More than two dozen experiments have since taken aim at the particle, dubbed the pentaquark, and its possible partners, in the quest to turn a hint into a discovery. It's a scenario that often plays out in science: an early theory or observation points to a potentially important discovery, and experimenters race to corroborate or to refute the idea.

"Research is the process of going up alleys to see if they are blind," said Marston Bates, a zoologist whose research on mosquitoes led to an understanding of how yellow fever is spread. Throughout history, taking different pathways has often led to new research tools, far-reaching insights and even great scientific discoveries.

But whether any particular alley leads to a discovery or a dead end can only be determined by experiment.

The æther is a classic example of an alley that led to nowhere. Greek philosophers introduced the idea of the æther thousands of years ago, arguing about the nature of the universe. Ancient Sanksrit tablets refer to the æther as the fifth element (after earth, air, fire, and water), and Aristotle proposed it as the substance of which stars are made. Yet he and his peers had no means to verify its existence.

Luminaries of 16th-19th century physics, including Newton, Fresnel, Stokes, and Maxwell, debated at length the properties of their physical version of the philosophical concept, which they called ether.

The ether was a way to explain how light could travel through empty space. In 1881, Albert A. Michelson began to explore the ether concept with experimental tools. But his first experiments, which seemed to rule out the existence of the ether, were later realized to be inconclusive.

Six years later, Michelson paired up with Edward W. Morley to devise the now-famous experiment that ruled out the ether by examining the speed of light in two different directions. Known as the Michelson-Morley experiment, it produced the most famous null result in history, signaling the scientific end of an idea that pre-dates science itself. Like many scientific debates today, getting to the conclusion about the ether was a back and forth process between theory and experiment, with no lightning-flash answer delivered from a single experiment.

Experiments in the 1950s and 1960s were crucial to establish quarks as the fundamental building blocks of matter. Clumping in pairs and triplets, quarks and antiquarks make up particles such as pions and protons.

In 1997, theorists from the Petersburg Nuclear Physics Institute in Russia were investigating the implications of quantum chromodynamics, the theory that describes the behavior of quarks. QCD, formulated in the 1970s, is a complicated theory; performing calculations with it often involves approximate models and techniques. Maxim Polyakov, Dmitri Diakonov, and Victor Petrov were using a specific model that had previously had some impressive predictive successes to better understand some features of quark behavior.

As they studied the model, they discovered that it predicted the existence of a new family of particles, the pentaquarks. Unlike protons, which consist of three quarks, or pions, which contain a quark and an antiquark, each pentaquark has four quarks and one antiquark. Although pentaquarks had never been observed, the general rules of quark theory allow this combination of quarks and antiquarks to exist.

The calculations performed by the Petersburg trio predicted a pentaquark, named "Theta-plus," that contains three different flavors of quarks: two up quarks, two down quarks, and a strange antiquark. The presence of the strange antiquark should make the particle uniquely identifiable in experimental searches, giving it a property called strangeness. Armed with this specific information, several experimenters turned their attention to the finding the Theta-plus and its partners. 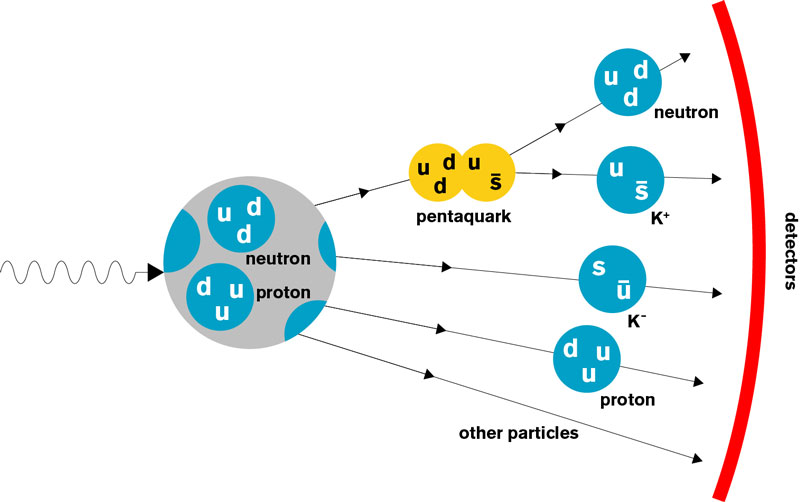 In one type of experiment, gamma rays hit carbon-12 nuclei, which leads to the creation of various other particles. Theoretically, these could include a pentaquark, which would quickly decay into other particles. Physicists try to reconstruct this process from the final particles seen in the experiment to determine whether the pentaquark was actually created.

Hint at a discovery

In the spring of 2003, experimenters from the SPring-8 laboratory in Japan announced the first potential pentaquark sighting, finding hints of the particle in experiments in which energetic gamma rays hit carbon-12 atoms, creating quark clusters. That same year, researchers from Jefferson Lab, the Alikhanov Institute for Theoretical and Experimental Physics (ITEP) in the Russian Federation, and the Electron Stretcher and Accelerator (ELSA) in Germany, announced that they, too, might have spotted tantalizing hints of the Theta-plus in data previously taken in other experiments.

It is in a hint of a new particle that the challenges of particle physics become very obvious. The data recorded in a particle physics experiment are rather messy as lots of particles emerge from a single high-energy particle collision. Because of their short-lived nature, most particles leave no obvious signature in the particle detectors, and experimenters need to rely on sophisticated particle reconstruction software and detailed statistical analyses to determine the properties, or even the existence of a particle.

In the case of the pentaquark, physicists not involved in the initial experiments soon questioned the observations. Simultaneously, authors of some of the original papers began refining the statistical analyses of their results; careful re-evaluations of the data and more sophisticated statistical methods led to less confidence in the existence of the pentaquark.

Pentaquark enthusiasm, however, had taken hold, and many more experimental groups were conducting their own searches for the exotic particle. While some higher-statistics searches for the pentaquark began reporting null results, others seemed to find signs that pentaquarks existed.

Meanwhile, theorists were busy trying to understand the potential particle, performing calculations for production mechanisms and probabilities. Some of those calculations confirmed the possible existence of pentaquarks, but not always at the same energies where experiments were seeing hints.

To resolve the issue, physicists began to set up dedicated experiments that would either make precise measurements of the pentaquark or rule out certain production mechanisms. In April 2005, a group from Italy's Istituto Nazionale di Fisica Nucleare in Genova announced results from a high-precision measurement at Jefferson Lab. Examining the same reaction that produced the positive result at ELSA in 2003, the new experiment, which collected one hundred times more data and hence produced much better statistics, found no evidence of the pentaquark. Other higher-statistics results have done likewise. "If it's there, I don't see how it could have escaped the higher statistics in this experiment," says Ken Hicks, an Ohio University researcher in the field. 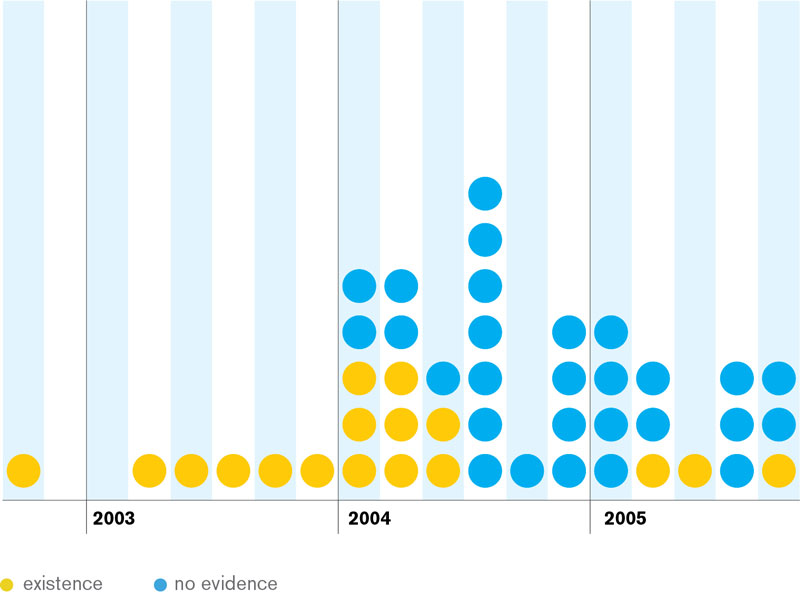 What is the final answer?

As it turns out, the tales of both the ether and the pentaquark are still incomplete; hidden doors may lurk at the end of what appeared to be blind alleys. Although the ether as defined by Newton–as a medium needed for the propagation of light–does not exist, space is not empty either. Quantum theory describes the vacuum less like an expanse of emptiness between subatomic particles and more like a field transmitting force and energy, a seething breeding ground of subatomic particles. Although this description of the vacuum doesn't fit with Newton's narrower definition, it does mesh eerily well with the ancient concept of the æther as an unseen, all-pervasive medium filling space.

And the pentaquark is not dead either. Some production channels remain open. "The evidence is not conclusive. Is there something that is irrefutable? No, not yet," says Andrew Sandorfi, a scientist at Brookhaven National Lab who's reviewed the literature.

The pentaquark's legacy is still unknown. "It certainly stimulated a lot of thinking in the area of quantum chromodynamics," says pentaquark expert George Trilling, a Lawrence Berkeley National Laboratory researcher who provided the pentaquark summary in the Particle Data Group's Review of Particle Physics.

Whether positive or null, each experimental result brings physicists closer to an understanding of the universe. Ruling out the presence of possible subatomic particles is just as important as finding new ones. Without the searches, scientists would never know if these particles were out there, waiting to be discovered.

Even though the pentaquark seems to be illusory, at least in the form physicists have pursued so far, the alley leading toward it has been full of interesting revelations.