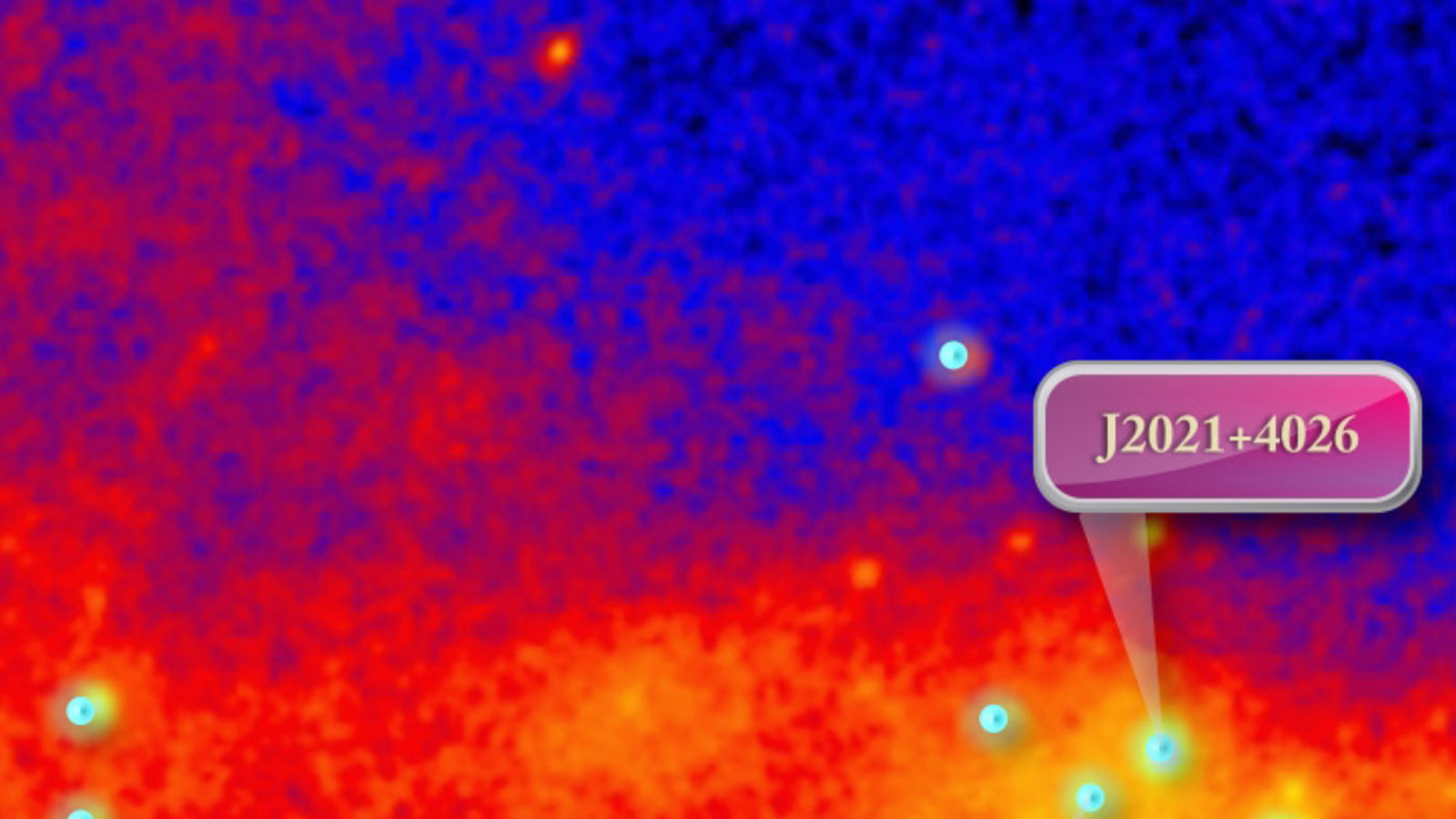 Astrophysicists studying the gamma-ray sky have gone back over five years of survey data from the Fermi Gamma-ray Space Telescope and discovered something new: a pulsar that varies in the amount of gamma-ray radiation it emits.

Pulsars have a reputation as the cosmic versions of lighthouses: These neutron stars emit beams of electromagnetic energy. The beams sweep across the sky with the pulsar’s rotations, like beacons sweeping across space. Astrophysicists have known for some time, though, that the clockwork precision of pulsars is an illusion; not only do they rotate more and more slowly as they lose energy over millennia, the amount of energy they emit in radio waves and X-rays at any one time can change too.

But the knowledge that pulsars also vary in gamma rays is a bit surprising, says Fermi scientist Luigi Tibaldo. “The X-rays and radio waves emitted by pulsars are generated through different processes than the gamma waves,” he says. When the Energetic Gamma Ray Experiment Telescope, or EGRET, the predecessor to Fermi’s main instrument, the Large Area Telescope, saw no signs of variability, astrophysicists considered the stability of pulsars in gamma rays to be an axiom—“No, more than an axiom. A motivated conclusion. We just didn't think they varied,” Tibaldo says.

The pulsar, known as PSR J2021+4026, is one of the first previously unknown pulsars found by Fermi after its launch in 2008. It resides in the Gamma Cygni region—the very heart of the Swan constellation. At first, it seemed like a perfectly ordinary pulsar. Yet as Tibaldo and his colleague Massimiliano Razzano reviewed the data, they saw hints of a small, steady increase in gamma rays from the beginning of Fermi’s mission in 2008 until mid-October 2011. Then, in less than a week, gamma-ray energies dropped by almost 20 percent, while the pulsar’s rotational speed got slower and slower.

This was “very peculiar,” Tibaldo says. A pulsar slows down because it emits energy. “Think about it,” he continues. If the rotational speed continues to drop, “the pulsar should be emitting more energy, but we weren't seeing it. Where was the energy going?”

Their theory, which Tibaldo presented last month at the 27th Texas Symposium on Relativistic Astrophysics, is that a violent upheaval in the intense magnetic fields surrounding the pulsar caused the variability.

“Here we are dealing with magnetic fields trillions of times more intense than Earth’s magnetic field,” says Razzano, who presented their results at the American Astronomical Society meeting in Washington, DC, earlier this month. “Fields of that strength are currently impossible to reproduce in the laboratory.”

These magnetic fields essentially aim the pulsar’s energy beams, and, says Tibaldo, “the field lines broke and reconfigured in less than a week. This moved the beam slightly off our line of sight. It only looks like the gamma ray flux went down because we’re no longer directly in its path.”

In other words, researchers can only see pulsars whose beams sweep across Earth. If the pulsar’s beams were to redirect away from Earth, the signal would drop—just what the Fermi telescope observed.

PSR J2021+4026 remains the only known pulsar that’s variable in gamma rays. With a sample set of one, Tibaldo can’t say if his team’s theory is correct or not. “Having more cases is important to understanding what's going on,” he says.

As the Fermi mission continues, Tibaldo and Razzano—working with a team at laboratories and universities including SLAC National Accelerator Laboratory, the University of Pisa and Italy’s National Institute of Nuclear Physics—hope to gather data on additional gamma-ray-variable pulsars. With these, they may be able to determine if this new type of pulsars really stands apart from the rest, or if the only difference is in perspective.

This work recently appeared in The Astrophysical Journal Letters.