The universe is expanding faster and faster, but no one knows why.

Now researchers are proposing a host of ambitious experiments to measure dark energy, the mysterious phenomenon that is thought to be driving the acceleration. Theyll be looking for clues in exploding stars; ancient, frozen sound waves; and the way massive objects in space bend and distort light.

Scientists want to know precisely how much dark energy there is, and whether its effects evolve over time. To that end, there are nearly 30 experiments proposed or under way, according to the Dark Energy Task Force, a committee established by the US National Science Foundation, the US Department of Energy, and NASA.

Each of these projects on the table has the potential of dramatically advancing the field, says cosmologist Andreas Albrecht of the University of California, Davis. Its not like we have to wait for new technology or a new invention. We can go out and do this, and its really excitingits a great place to be.

Until about 10 years ago, scientists thought the expansion of the universe that began with the big bang was slowing down. Then observations of distant, exploding stars known as Type Ia supernovae revealed the existence of dark energy, shocking astronomers.

Its causing the expansion of the universe to acceleratethats a mind-boggling discovery, says Roger Blandford, an astrophysicist at the Kavli Institute for Particle Astrophysics and Cosmology (KIPAC) at Stanford University and the Stanford Linear Accelerator Center.

Meanwhile, information embedded in the cosmic microwave background, which contains the echoes of the big bang, showed that the universe must hold a certain amount of energy and matter. The sum total of all the visible stars and galaxies, however, along with the dark matter that is not directly observable, makes up only about 30% of this expected amount. Dark energy must make up the majority of the universe, accounting for 70% of its contents. 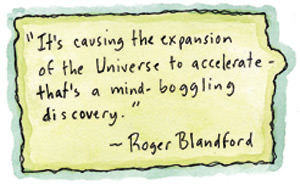 Physicists have several ideas of what dark energy could be, one of which harks back to what Einstein reportedly considered his biggest blunderthe cosmological constant. Originally a term Einstein inserted in his equations to force them to reflect the prevailing notion of a static universe, the modern cosmological constant is a pervasive energy that stays the same throughout space and time. Blandford calls it a pristine energy field. It almost raises metaphysical questions as to why it should be so, he says. Also called vacuum energy, it is the energy of empty space, possibly caused by quantum effects.

On the other hand, dark energy might be something more complicatedan exotic energy field called quintessence that varies over space and time. Alternatively, dark energy may not be energy at all, but the result of gravity behaving oddly at the vast scale of the growing universe. If this is true, physicists might need to modify one of the hallmarks of modern physics, Einsteins general theory of relativity.

A host of experiments

Some of the proposed hunts for dark energy could start bringing in new data as soon as 2010. For instance, the Dark Energy Survey (DES), will scan the sky from a new camera on the existing four-meter Blanco telescope at the Cerro Tololo Inter-American Observatory in Chile. Although researchers are planning more powerful telescopes to be built over the next decade, DES is particularly important because it can start collecting data in just a couple of years.

At the time it starts running, itll be the most powerful dark energy experiment, says James Annis, an experimental astrophysicist at Fermilab who is involved in the project. The time were running on is on the scale of a PhD thesis, and not a professors career. From DES, scientists hope to develop new data-analysis techniques that can improve the next stage of experiments. Were a stepping stone, Annis says. Well keep pushing science forward while we wait for bigger projects to come.

One way to measure how the universe has expanded over time is to observe Type Ia supernovae. They are like lampposts lighting the path of the cosmological past, and provide astronomers with the most well-established technique for understanding how the universe has been growing. Type Ia supernovae are stars that happen to explode with the same energy every time, making them so-called standard candles. By comparing their observed and theoretical brightnesses, astronomers can deduce how far away they are. The proposed Dark Energy Space Telescope, or Destiny, would look for thousands of new supernovae. Its one of three candidates for the Joint Dark Energy Mission (JDEM) proposed by NASA and the Department of Energy.

Another candidate, the Advanced Dark Energy Physics Telescope, or ADEPT, would also observe supernovae, but its main objective would be to measure primordial rumblings called baryonic acoustic oscillations. Around 300,000 years after the big bang, the universe was a soup of ions reverberating with sound waves. Once the soup expanded and its contents separated into neutral atoms, the signature of these sound waves froze into the cosmic microwave background and into the accumulating matter that eventually coalesced into stars and galaxies. By sifting through the microwave background and the distribution of galaxies, astronomers could find the imprint of these ancient sound waves; their size would provide another measure of cosmological distances. 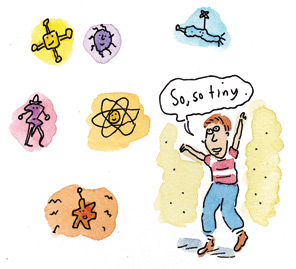 A second line of investigation is to analyze the growth of structure in the universe. As the universe evolved, gravity drew small clumps of matter together, eventually forming the stars and galaxies seen today. Because dark energy opposes gravity, it would stunt the growth of the universe, and in doing so, leave clues about its properties. By directly measuring the structure of matter on large scales, scientists hope to find out whether dark energy is actually a form of energy or the result of an incomplete understanding of gravity.

Some of these studies will take advantage of a phenomenon called gravitational lensing, caused when matter bends light. There are two types of lensingstrong and weak. With strong lensing, a galaxy or another massive object lying in front of a source of light can bend that background light completely out of shape, sometimes making multiple images of it. In weak lensing, masses that are spread out more thinly create subtle distortions that require statistical analyses to detect. The amount of distortion indicates how much dark matter there is, giving researchers a way to map the matter in the universe and find out how its structure changed over time.

Because it can scan vast swaths of the sky, the proposed Large Synoptic Survey Telescope (LSST) would be particularly adept at measuring weak lensing effects. A bigger version of DES, the LSST would be an 8.4-meter ground-based telescope on Cerro Pachon in Chile. Armed with a powerful camera, it would take thousands of pictures of every region of space, covering half the sky in just a few days.

Another way to map the distribution of matter is to take a census of groups of galaxies bound by gravity. Galaxy clusters are the largest structures in the universe, and astronomers can detect these behemoths in various ways, including X-ray and optical observations. The Constellation-X Observatory, a proposed space mission, would consist of four telescopes on one spacecraft. About 100 times more powerful than current telescopes, such as the Chandra X-ray Observatory, it would investigate how dark energy has shaped the clustering of galaxies and driven the acceleration of the universe. 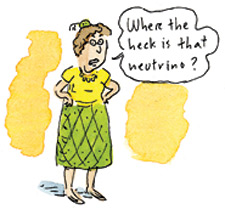 The most exciting part of this field isnt just dark energy, but the convergence of these tests, says Steven Kahn, a KIPAC astrophysicist. The combination of independent techniques would not only build confidence in the results, but also give researchers a better understanding of the techniques themselves, cutting down on experimental uncertainties. This would lead to more precise measurements in the future and a deeper interpretation of the data.

Indeed, many proposals employ more than one approach. For instance, the third candidate for JDEM, called the Supernova/Acceleration Probe, is designed to observe supernovae deep in the sky, but would also observe weak lensing effects and frozen sound waves. The Square Kilometer Array, a proposed radio telescope, would survey both frozen sound waves and galaxy clusters. In one of its key findings, the Dark Energy Task Force concluded that this diversity in approach is essential. But with so many proposals on the table and limited funds, deciding which experiment to pursue is a difficult challenge.

The path to the future

As important as the dark energy question may be, another issue to consider is the versatility of these proposals to address other scientific questions. Projects such as the LSST, Constellation-X, and the Square Kilometer Array can study many aspects of the universe, including the physics of black holes and the formation of planets.

Both JDEM and Constellation-X are options for NASAs Beyond Einstein program, a broad initiative to study important topics in astrophysics, includ-ing cosmology, gravity, and black holes. Another Beyond Einstein candidate, the Laser Interferometer Space Antenna, or LISA, would study ripples in space-time called gravitational waves, and also has the potential to probe dark energy. Each of these projects contributes in its own unique way, but the dominant [Beyond Einstein] mission whose science goal is primarily detection of dark energy is JDEM, says Michael Salamon, one of the NASA scientists overseeing the Beyond Einstein program. NASA will decide in the next few months which of the Beyond Einstein probes will go forward next, a decision that might influence the selection of other projects. 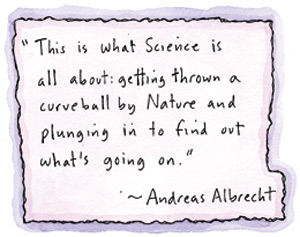 Although JDEM has three specified candidates, it is still an open competition. Any researcher could offer another proposal if JDEM is indeed the next Beyond Einstein mission. We want to make sure there are a number of viable competing teams, Salamon says.

In most instances, the proposals target dark energy in complementary ways with different strengths and weaknesses. For example, ground-based observatories can be larger and more powerful, but space telescopes can avoid the blurring effect of the atmosphere.

Despite difficult decisions ahead, scientists are thrilled about the future. I have complete confidence that some good choices will be made, Albrecht says. This is what science is all about: getting thrown a curveball by nature and plunging in to find out whats going on. Theres a lot of expertise out there working on it, and I trust there will be a great outcome.