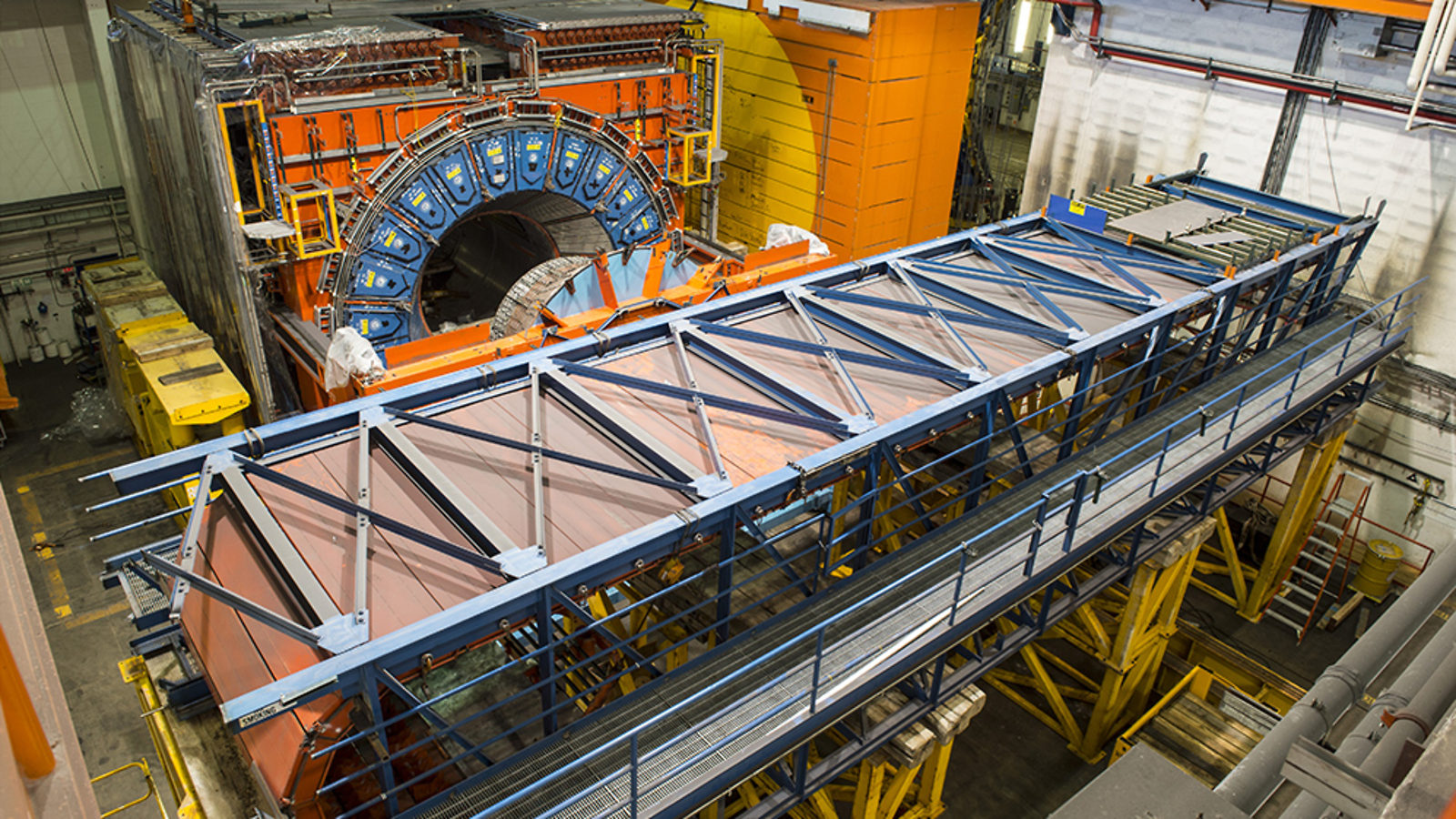 One day when Tom Wicks was a child, he biked over to see his mom, Lois Anderson, working at an office in Aurora, Illinois. She was at the top of the building, welding and torching as ironworkers do.

Both mother and son have worked as ironworkers on Fermilab experiments throughout their careers. Anderson, known as “Sarge” during business hours and the only female on her crew for decades, began ironworking at CDF—one of two detectors located on the Tevatron ring—when it was “a hole in the ground” in the early 1980s. Anderson and Wicks, rigging superintendent at Joliet Steel & Construction, worked together on the last upgrade of the detector in 2001.

Now Wicks is dismantling much of the roughly 4000-ton particle detector that he, his mother and his stepfather helped build.

“She likes to tease me about it. ‘All that work we’ve put into it, and now you’re tearing it apart?’“ Wicks says.

CDF ran for more than two decades, collecting data from proton-antiproton collisions from 1985 until the Tevatron shut down in 2011. Scientists at CDF and its sister detector DZero discovered the last quark predicted by the Standard Model, the top quark. Both collaborations still analyze valuable data collected from the detectors.

In its heyday, the large orange and blue CDF detector (pictured above) drew crowds when upgrades required rolling the machine from the collision tunnel to an open assembly hall.

“During the last upgrade, it was like a football game,” Wicks says. “There were so many people watching, you couldn’t get a space along the rail to watch us do it.”

Wicks and his crew began working with Fermilab staff to remove equipment from the CDF detector in March 2013. They will likely finish next month, leaving intact the multimillion-dollar solenoid magnet at the core of the detector.

John Wackerlin, a fellow ironworker and foreman at Walbridge, led one of the teams tasked with decommissioning the experiment. Like Wicks, he’s laying to rest something his family helped build. His father, Bob Wackerlin, welded together the structure that houses the 30-foot-tall detector.

The elder Wackerlin’s work at Fermilab started even before CDF. When his wife was pregnant with John, Bob Wackerlin worked underground in the 4-mile Tevatron tunnel while it was still being dug. He retired after 42 years as an ironworker and said he’s proud of his family’s connection to the laboratory.

“I’ve worked in just about every building on this site,” Bob Wackerlin says. “Fermilab projects are some of the best jobs that come across our ironworkers union. It’s employed a lot of people over the years.”

His son adds, “Working with physicists and the talent and brainpower here—it’s unreal.”

Although CDF is turned off and its many wires and cables have been scrapped, much of the detector will find a home in future experiments. The solenoid magnet, for example, could be reused in another particle experiment, says Fermilab scientist Jonathan Lewis. Scientists are recycling parts of the detector for other high-energy physics projects at Fermilab, and electronics, phototubes and assorted pieces of CDF have also been shipped to other labs and universities in the United States, Europe and Japan.

Both families see this as progress.

“Once you’ve learned something from one experiment, it makes way for new experiments,” John Wackerlin says. “So now we can go on to even bigger and better things. I’m excited about it.”

Thanksgiving in the Main Control Room

The daughter of the Tevatron particle collider’s Mr. Fix-It continues a tradition of providing cheer for operators stuck at work on the holiday.

Mark Hanhardt spent his childhood exploring caverns and watching his dad, who was a miner, come home from work covered in dust. Still, he had no interest in working underground.

This family tree has physics branches

Who is the grandfather of particle physics? Some might argue he is Otto Mencke, a German philosopher and scientist who received his doctorate from Leipzig University in 1688.