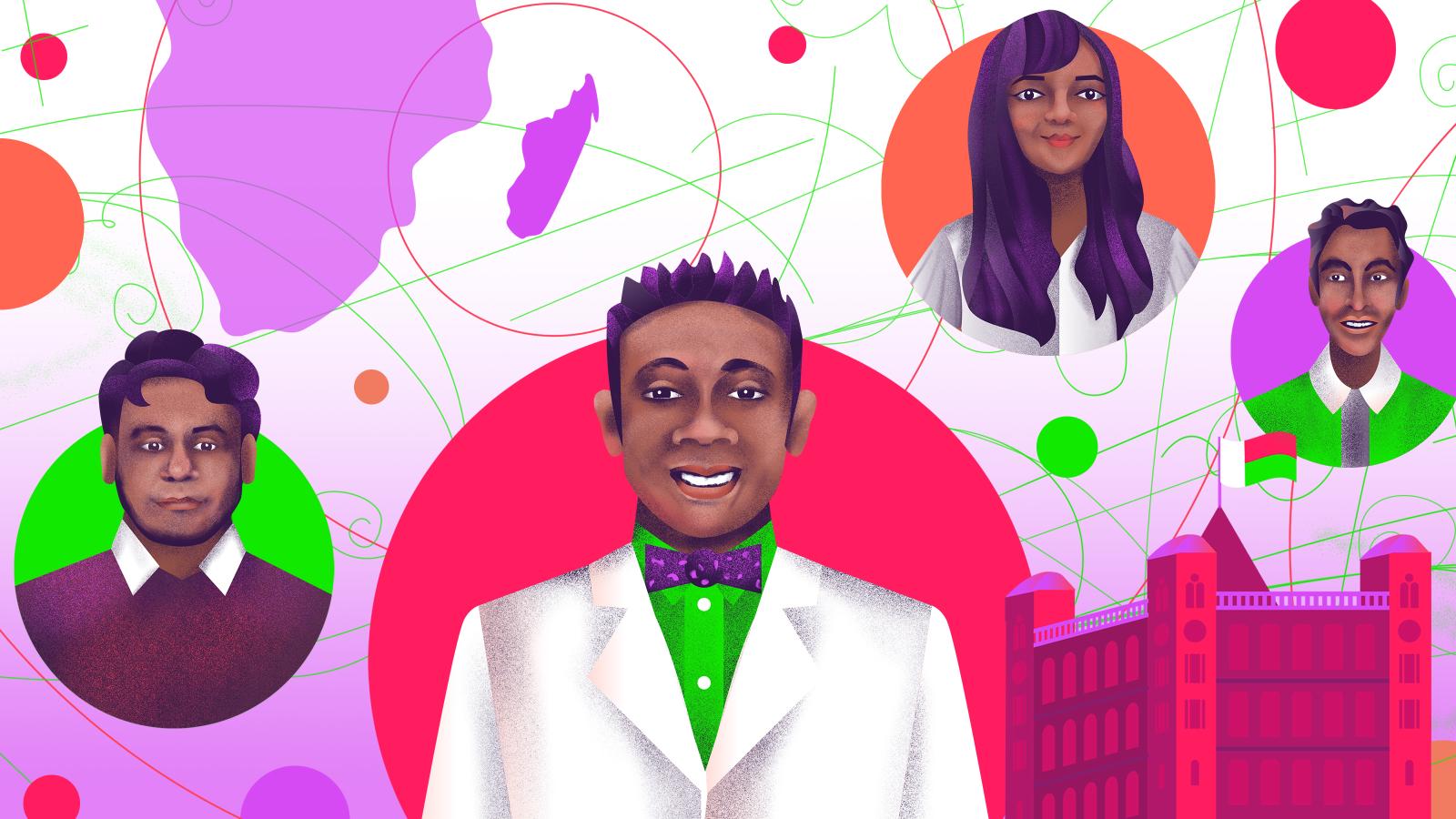 Miriama Rajaoalisoa had initially planned on pursuing a career in nanotechnology after completing her bachelor’s degree at the University of Antananarivo in Madagascar. But in 2015, a scientist’s lecture about neutrinos made her change her mind. Rajaoalisoa was captivated by the elusive, ghostlike particles that the scientist described. “That’s when I decided to pursue experimental particle physics,” she says.

It wouldn’t be easy. There were no neutrino experiments in Madagascar, and connecting with experiments and physicists in other countries would be difficult. Madagascar had access to high-speed internet via the Eastern African Submarine Cable System, but the only way Malagasy students could plug into it was via outdated computers at noisy internet cafés interrupted by daily power outages.

Still, Rajaoalisoa knew her dream was possible. That’s because the scientist who came to her university was someone who had already achieved it. One of five Malagasy students at the first-ever African School of Physics, Laza Rakotondravohitra had blazed a trail to a doctoral degree studying neutrinos.

Today, Rajaoalisoa is a doctoral student and member of the Deep Underground Neutrino Experiment at the University of Cincinnati, and Rakotondravohitra, a medical physicist, is still working to help Malagasy students study physics. 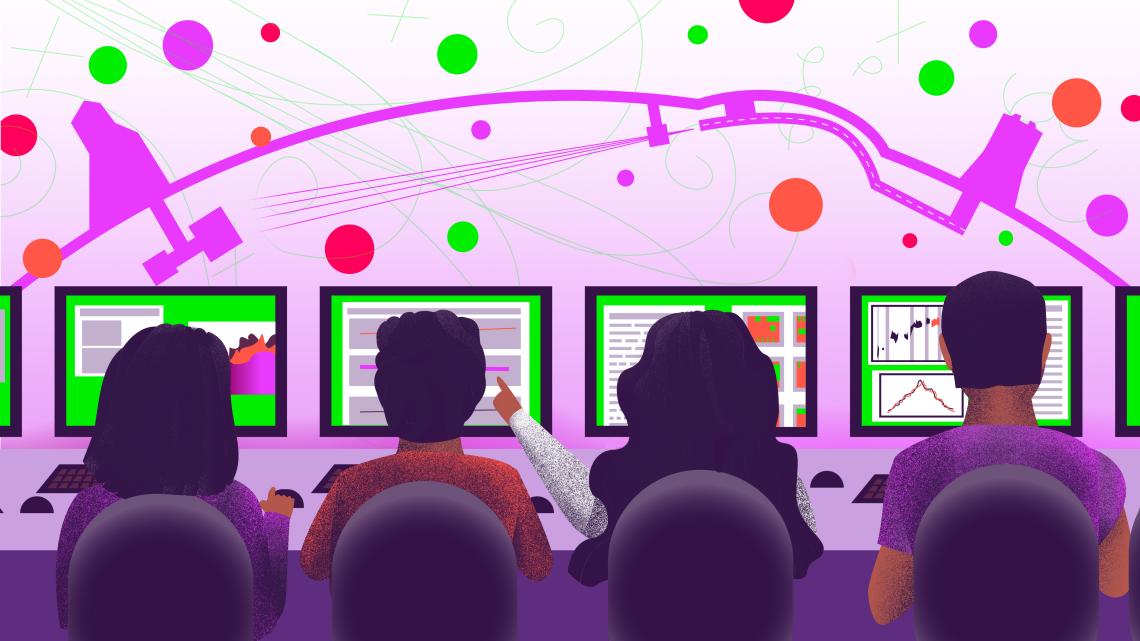 From Madagascar to Fermilab

For Rakotondravohitra, the program was both an eye-opening experience and a challenge. At their universities, he and his fellow Malagasy students spoke French and Malagasy, but the professors at the physics school taught in English. Rakotondravohitra recalls spending an entire evening in the computer lab with one of his friends going back over the lectures to ensure they understood. “But we picked things up pretty quickly,” he says. “Physics is the same regardless of the language.”

After completing his master’s studies in 2012, Rakotondravohitra was accepted as an international fellow at the US Department of Energy’s Fermi National Accelerator Laboratory.

He credits the African School’s organizers—Christine Darve, Kétévi Assamangan and their team—as well as Young-Kee Kim, then deputy director of Fermilab, with encouraging him to apply. “I will always be grateful for the leadership at the African School of Physics, because they really opened a lot of doors for me,” Rakotondravohitra says.

During his fellowship, he lived in a dormitory on the Fermilab campus and participated in the MINERvA neutrino experiment under the supervision of Fermilab scientist Jorge Morfín. Working at the lab was intimidating at first, he says. But then he met another international doctoral student, David Martinez, from Colombia. The two discovered they had experienced similar struggles.

“It was difficult for us when we arrived,” Rakotondravohitra says. “We didn’t even know what we didn’t know.”

They had studied the theoretical side of physics, but unlike most of their peers from the United States, they had no experience with experiments. They had to learn to run simulations, analyze data and operate a detector.

They did it, both completing their PhDs in 2015. One of their MINERvA colleagues, Steven Dytman, then a professor at the University of Pittsburgh, even flew to Madagascar for Rakotondravohitra’s thesis defense.

Afterward, Martinez went to the Illinois Institute of Technology in Chicago as a postdoctoral researcher and continued to participate in Fermilab experiments. Rakotondravohitra pursued an additional degree, specializing in medical physics, at Wayne State and Duke universities.

The duo stayed in touch and decided to work together to support students like them.

At first, they helped students from Madagascar and Colombia find and apply to scholarships to study physics in the US. The students were bright, but none of their applications were getting accepted.

Rakotondravohitra and Martinez quickly realized that the missing ingredient was exactly what they had gained during their fellowships: research experience.

They changed tack and worked to provide students with training. Martinez assigned them small projects related to programming and neutrino physics that they could work on from afar. “The students have shown incredible enthusiasm for the research,” Rakotondravohitra says. “They always deliver their work on time.”

With the additional experience under their belts, the students were no longer being turned down. To date, six of the team’s trainees from Madagascar and four from Colombia have enrolled in graduate programs in the United States, and still others are pursuing physics at institutions in other countries, including Japan and India.

“There are many students in Madagascar and in other African countries who are very interested in a scientific career, but they don't have the opportunity to pursue one,” says Manoa Andriamirado, a Malagasy PhD student at the Illinois Institute of Technology. “What [Rakotondravohitra and Martinez] are doing is really important. They changed my life.”

Martinez, who is now an assistant professor in the physics department at the South Dakota School of Mines and Technology, says seeing students succeed has been incredibly gratifying. “I think the scientific community is starting to see that there is a lot of talent from these regions.”

Rakotondravohitra and Martinez facilitated Malagasy students’ participation in neutrino research in another way as well.

In 2015, Rakotondravohitra contacted his former professor Roland Raboanary at the University of Antananarivo to see if he would be interested in joining Fermilab’s flagship neutrino project, the international Deep Underground Neutrino Experiment—then under the place-holder name Experiment at the Long-Baseline Neutrino Facility.

Rakotondravohitra, who today works as a medical physicist in Texas, is now in the middle of a new big project: creating a lab in Madagascar where students can access resources, such as high-quality computers and a reliable internet connection, to help them carry out their research.

Today, Rakotondravohitra, Dytman, Martinez and Fenompanirina Andrianala, an associate professor at the University of Antananarivo and member of DUNE, are working together to bring more equipment from the US to Madagascar. The team hopes to have a new lab up and running within the next two years.

Rakotondravohitra says he hopes that the number of students in Madagascar that successfully pursue particle physics will continue to grow.

“My main hope is that each student succeeds, and that they go on to help other students,” he says. “And all of the students are motivated to come back to Madagascar one day.”