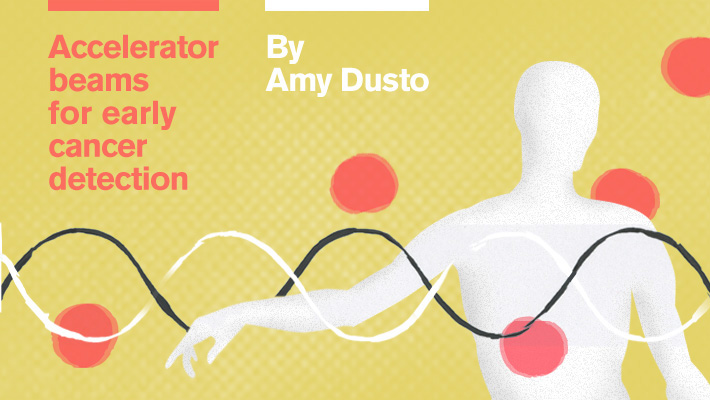 Esophageal cancer is one of the eight most common cancers worldwide, with nearly half a million new cases each year. Of those diagnosed, only 5 to 10 percent survive for at least five years and, for reasons doctors don’t yet understand, this cancer is on the rise—especially in the West. Now scientists are developing a particle accelerator into a new tool for diagnosing pre-cancerous tissues in patients at risk.

A team led by biophysicist Peter Weightman uses the ALICE accelerator at England’s Daresbury Lab to image the biochemical composition of tissue from patients afflicted by a condition called Barrett’s esophagus. Barrett’s sufferers are 10 times more likely to develop esophageal cancer, but most acquire symptoms too late for treatment.

With ALICE-created images, doctors can distinguish pre-cancerous tissues from benign ones. The method may one day give diagnoses in time to save lives.

“It’s frightening talking to medics because they say, ‘Yes, I’ve got this patient dying from this, can you do something about it next week?’” Weightman says. But, he continues, “of all the problems I’ve ever been involved in, this is the one I was most confident we could solve.”

Doctors currently diagnose pre-cancerous tissues in patients with Barrett’s esophagus by analyzing random cell samples. This technique can miss areas with telltale changes, says University of Liverpool gastroenterologist Mark Pritchard, who works on Weightman’s team. If the new technology is shown to be accurate and reliable, it could give doctors a more comprehensive view.

To measure cancer cues, scientists tune the ALICE accelerator’s infrared light to a wavelength that excites one specific type of cellular component, such as DNA or proteins. When the light shines into the sample, the excited electrons from that component lose their energy in the form of photons—light researchers can see. They collect this reflected light with a micron-wide tube that they spend about an hour scanning slowly over the entire tissue surface. The result is a map of the density of one component, such as DNA, across the sample.

For each sample, the researchers repeat the process to map three or four different components known to vary in cancerous versus noncancerous tissues. “When you go cancerous, the DNA goes up and the protein goes down,” Weightman says. That’s because cancer cells have more active DNA than healthy ones, facilitating the cell growth and DNA duplication necessary for a tumor to form.

So far, scientists have looked at two biopsy samples in a blind test and have proven their ability to correctly distinguish cancerous from non-cancerous tissue. They are still honing their methods; perhaps a certain level of one protein will prove to be the disease’s key signature, Weightman says.

The researchers hope to expand their work to other types of cancers as well. “I’m sure it could be applied to loads and loads of cancers, but I’m not sure which ones,” Weightman says. He has pending proposals to test the diagnostic system on prostate, breast, and head and neck cancers. Pritchard and others would also like to see the technology adapted to fit on the end of an endoscope, a medical instrument used to examine cavities within the body, for eventual diagnosis without biopsy.