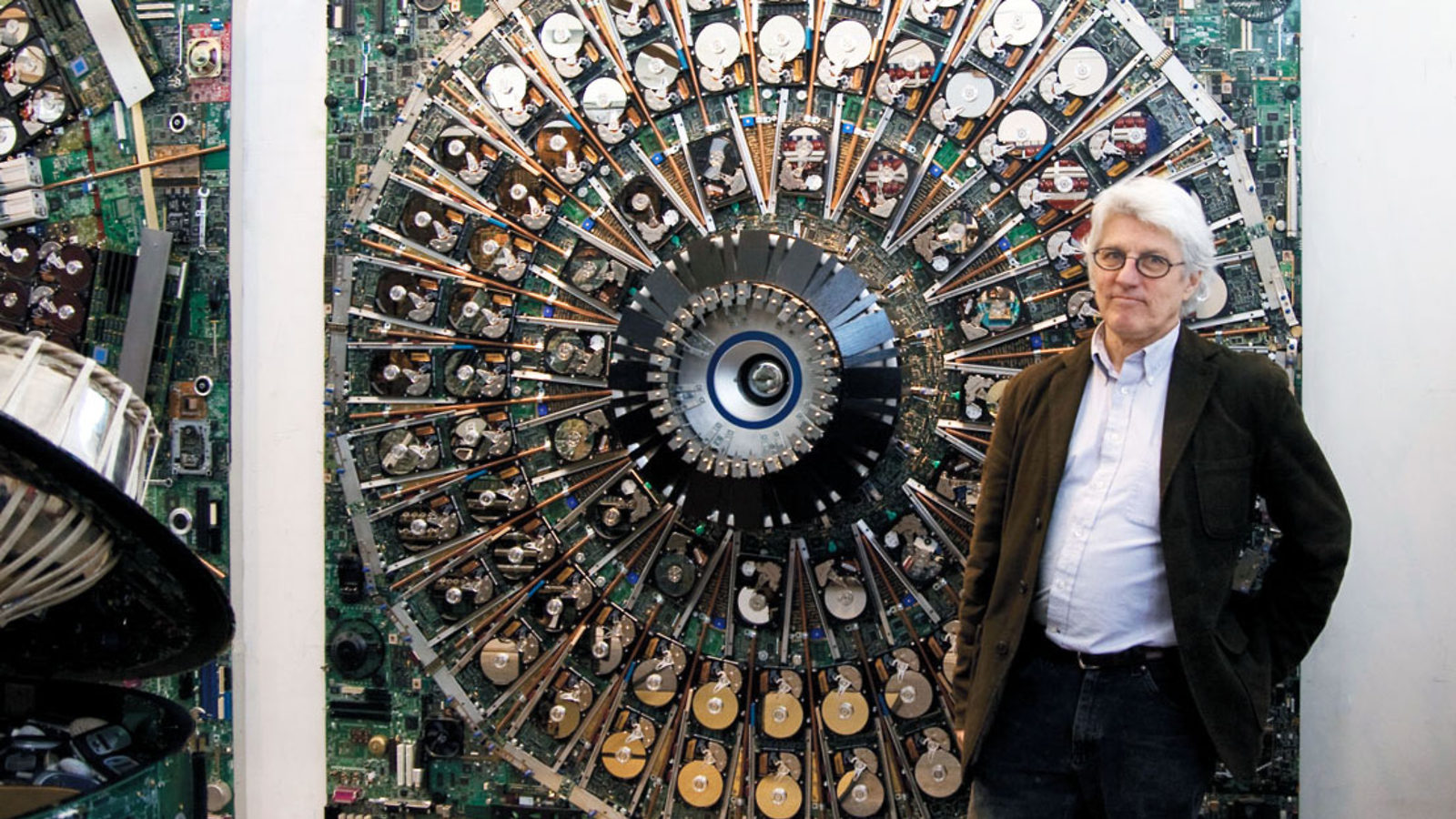 Over the years, John Zaklikowski raided his savings account to purchase every mother board, cell phone and floppy disk in sight. Now he’s used them to create artwork modeled on large-scale particle physics experiments.

For nearly 15 years, artist John Zaklikowski collected every computer, telephone, answering machine, stereo, and remote control that passed through his hands. He enjoyed taking the electronics apart, but wasn't always as good at putting things back together. And so he collected bits and pieces, saving the parts he liked—circuit boards, hard drives, video cards—until he had quite a stash.

“It was always in the back of my mind that I’d make a series of artworks that would incorporate some of these things,” he said on a recent afternoon in his San Francisco studio. “And finally, about three or four years ago, I thought, ‘Just throw this shit out, already, or do something with it.’”

Do something with it he did. Zaklikowski used every last mother board, cell phone and floppy disk—and an array of low-tech goods ranging from old-fashioned telephone bells to a kitchen-sink strainer—to make an artwork, Brainiac, six feet tall and six feet wide. He began with a rigid plywood armature and used screws to attach hundreds of components. A thick blue ring made of wax mixed with pigment added coherence to the intricate result, a juxtaposition of high and low tech.

Zaklikowski was pleased, and decided he needed to explore the unusual medium of electrical components further. By then, what had taken him so many years to gather was gone; he had no components left. But he soon discovered that the best place to buy unwanted electronics is eBay, where hundreds of mom-and-pop shops across the country sell obsolete equipment.

“This stuff turns over very rapidly; the hard drives aren’t big enough or the motherboards don’t support the new hardware,” Zaklikowski says. “So I’m competing with the gold reclaimers who will pull precious metals off this stuff.”

Over the past several years, Zaklikowski has spent nearly all of his savings on the circuitry and electrical components he used to create nearly a dozen works, most of them modeled on large-scale particle physics experiments.

“I’m not a physicist. I don’t have an engineering background; I don’t have a computer tech background. But I am intrigued with the symmetry, scale, and complexity of particle-physics detectors,” he says, “and also with particle physicists’ role in the human endeavor to understand the world that we are in. This is something that physicists and visual artists share—a desire to make sense of the world.” 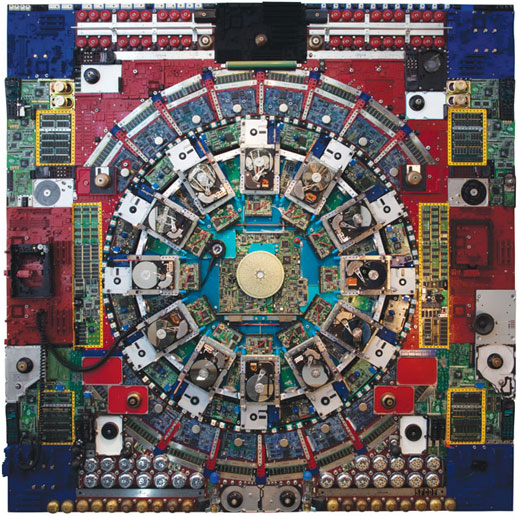 In fact, it’s genuinely difficult to distinguish a photograph of CDF from a photograph of Zaklikowski’s version (above). But as you step closer to Collider Detector at Fermilab, its unique but equally complex nature becomes clear.

One of the detector’s many onion layers is made of shiny hard drives, the next of circuitry and hard disks. Dotting one layer is a series of computer keys, spelling out gibberish everywhere but in the upper-right quadrant, where a sharp observer can spy the word “HIGGS.” The detector itself rests on a foundation of silver lids, of the variety one might find on the top of a cheese shaker.

“These things work on so many different levels,” Zaklikowski says. “Like particle-physics detectors, the individual components are oftentimes mentally intriguing or attractive objects in themselves, adding another layer of interest.”

Zaklikowski’s later works stray from exact replication, as he muddies the boundary between physicist and artist. With LHC, inspired by the Large Hadron Collider on the border between France and Switzerland, he brings together 90 hard drives, 100 razor blades and scalpels, and many square feet of circuit boards to create a detector part CMS, part ATLAS, as two of the colliders’ giant detectors are known.

“I have to caution visitors that this work could be dangerous with all the razor and scalpel blades,” he says, gesturing to the center of the three-dimensional work, where a circle of sharp blades protrudes toward the viewer. “It’s not necessarily intentional, but there is a little play on how some people think these particle accelerators are dangerous machines that are going to create micro-black holes that are going to destroy the Earth. Of course that's not the case, but those perceptions are part of the reality, too.”

Zaklikowski’s most recent particle-physics-based work, which is still in progress, is a stylized interpretation of SLAC National Accelerator Laboratory’s particle detectors. Working from photographs of the SLAC Large Detector and the BaBar detector, he is creating an eight-by-eight-foot piece surrounded by green circuit boards. As the eye is pulled inward by radial lines, it sweeps past banks of shiny silver hard drives and toward the central component, a circle of vacuum tubes of varying sizes. 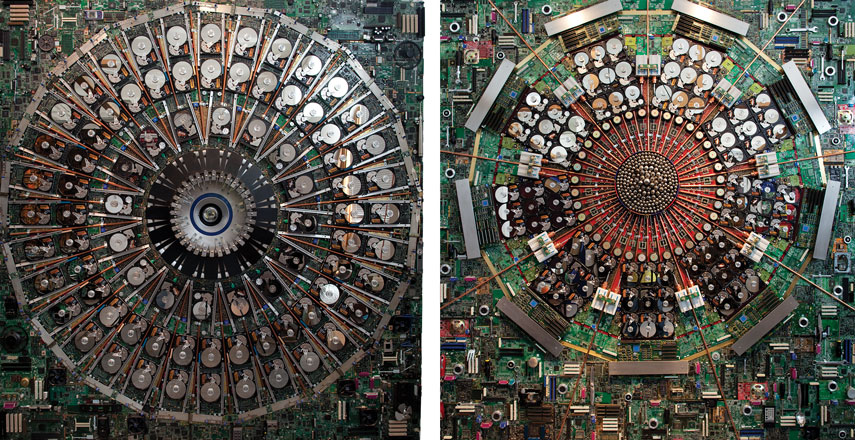 “Younger people often don’t know what these are because they have never seen a vacuum tube,” he says. “But when I was young, all radios and televisions were filled with these because solid-state electronic devices weren’t invented yet. In fact, particle detectors were originally made of vacuum chambers—not vacuum tubes, but similar. And so I call this the Stanford Vacuum Chamber.”

He says that as an artist, he is continually amazed by the tools of physics.

“I find particle detectors to be very beautiful things; fascinating, compelling, powerfully moving objects from a visual point of view,” Zaklikowski says. “If we were to take the CMS and the CDF out of their respective tunnels and cart them into an art gallery or museum that had high enough ceilings, I think you would find them to be extraordinarily beautiful objects in themselves.”