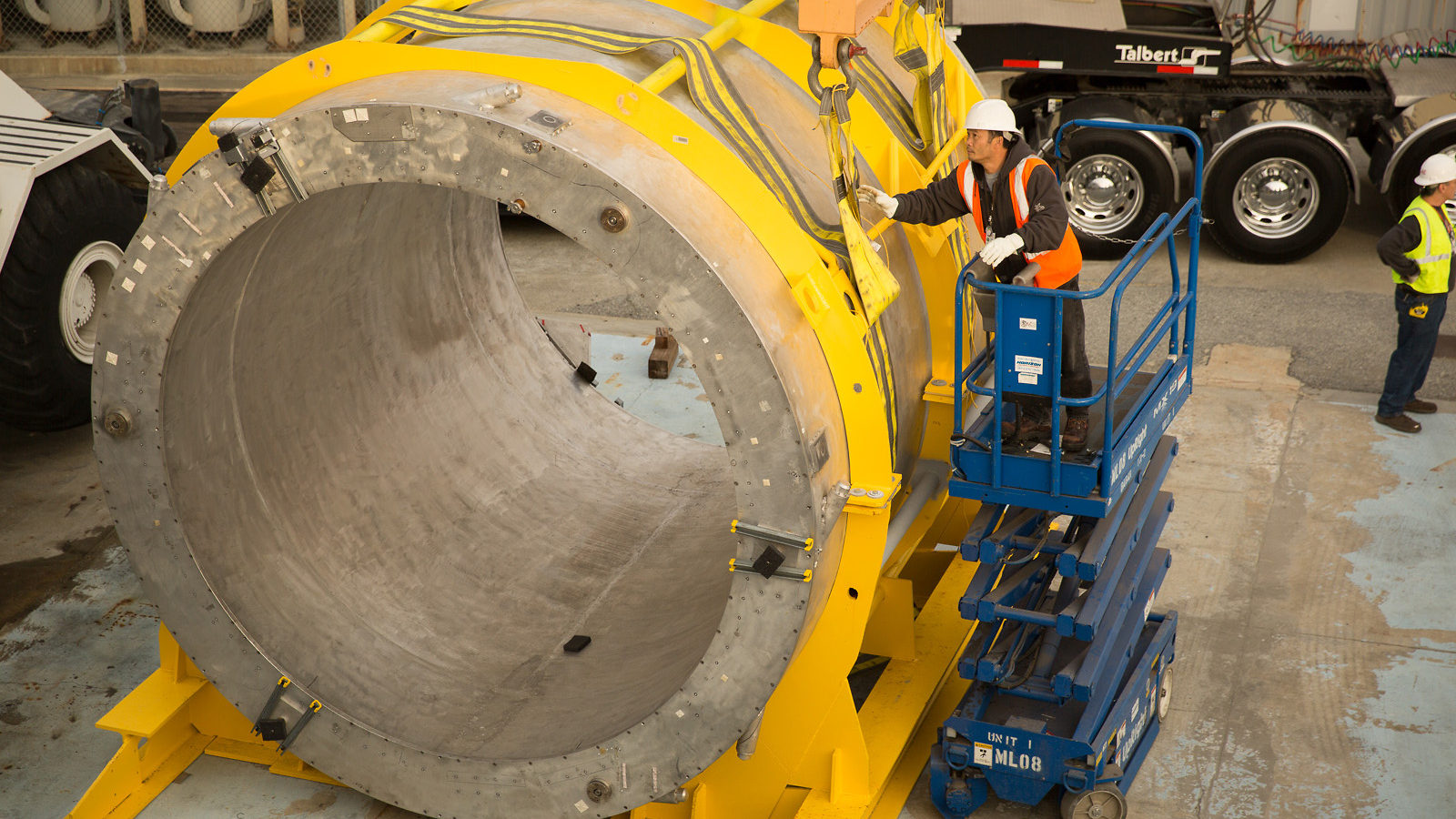 Imagine an MRI magnet with a central chamber spanning some 9 feet—massive enough to accommodate a standing African elephant. Physicists at the US Department of Energy’s Brookhaven National Laboratory need just such an extraordinary piece of equipment for an upcoming experiment. And, as luck would have it, physicists at SLAC National Accelerator Laboratory happen to have one on hand.

Instead of looking at the world’s largest land animal, this magnet takes aim at the internal structure of something much smaller: the atomic nucleus.

Researchers at Brookhaven’s Relativistic Heavy Ion Collider (RHIC) specialize in subatomic investigations, smashing atoms and tracking the showers of fast-flying debris. RHIC scientists have been sifting through collision data nuclei for 13 years, but to go even deeper they need to upgrade their detector technology. That’s where a massive cylindrical magnet comes in.

“The technical difficulty in manufacturing such a magnet is staggering,” says Brookhaven Lab physicist David Morrison, co-spokesperson for PHENIX, one of RHIC’s two main experiments. “The technology may be similar to an MRI—also a superconducting solenoid with a hollow center—but many times larger and completely customized. These magnets look very simple from the outside, but the internal structure contains very sophisticated engineering. You can’t just order one of these beasts from a catalogue. ”

The proposed detector upgrade—called sPHENIX—launched the search for this elusive magnet. After assessing magnets at physics labs across the world, the PHENIX collaboration found an ideal candidate in storage across the country.

At SLAC in California, a 40,000-pound beauty had recently finished a brilliant experimental run. This particular solenoid magnet—a thick, hollow pipe about 3.5 meters across and 3.9 meters long—once sat at the heart of a detector in SLAC’s BaBar experiment, which explored the asymmetry between matter and antimatter from 1999 to 2008.

“We disassembled the detector and most of the parts have already gone to the scrap yard,” says Bill Wisniewski, who serves as the deputy to the SLAC Particle Physics and Astrophysics director and was closely involved with planning the move. “It’s just such a pleasure to see that there’s some hope that a major component of the detector—the solenoid—will be reused.”

The magnet was loaded onto a truck and departed SLAC today, beginning its long and careful journey to Brookhaven’s campus in New York.

“The particles that bind and constitute most of the visible matter in the universe remain quite mysterious,” says PHENIX co-spokesperson Jamie Nagle, a physicist at the University of Colorado. “We’ve made extraordinary strides at RHIC, but the BaBar magnet will take us even further. We’re grateful for this chance to give this one-of-a-kind equipment a second life, and I’m very excited to see how it shapes the future of nuclear physics.” 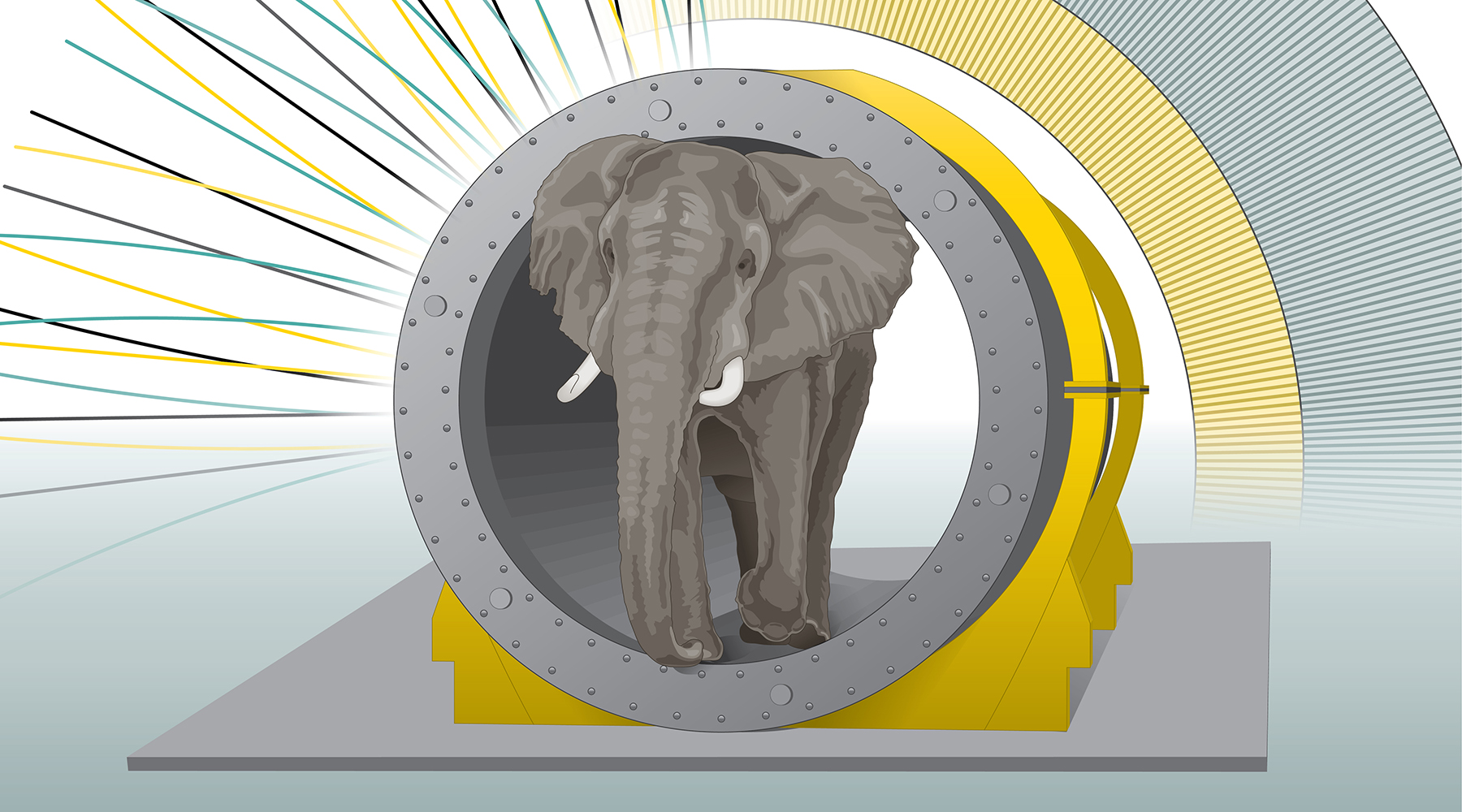 The BaBar magnet, a 30,865-pound solenoid housed in an 8250-pound frame, was built by the Italian company Ansaldo. Ansaldo’s superconducting magnets have found their way into many pioneering physics experiments, including the ATLAS and CMS detectors of the Large Hadron Collider. The inner ring of the BaBar magnet spans 2.8 meters with a total outer diameter of nearly 3.5 meters—nearly the width of the Statue of Liberty’s arm.

During its run at SLAC, the BaBar experiment made many strides in fundamental physics, including contributions to the work awarded the 2008 Nobel Prize in Physics for the theory behind “charge-parity violation,” the idea that matter and antimatter behave in slightly different ways. This concept explains in part why the universe today is filled with matter and not antimatter.

“BaBar was a seminal experiment in particle physics, and the magnet’s strength, size and uniform field proved essential to its discoveries,” says John Haggerty, the Brookhaven physicist leading the acquisition of the BaBar magnet. “It’s a remarkable piece of engineering, and it has potential beyond its original purpose.”

In May 2013, Haggerty visited SLAC to meet with Wesley Craddock, the engineer who worked with the magnet since its installation, and Mike Racine, the technician who supervised its removal and storage. “It was immediately clear that this excellent solenoid was in very good condition and almost ready to move,” Haggerty says.

Adds Morrison, “The BaBar magnet is larger than our initial plans called for, but using this incredible instrument will save considerable resources by repurposing existing national lab assets.”

Brookhaven Lab was granted ownership of the BaBar solenoid in July 2013, but there was still the issue of the entire continent that sat between SLAC and the experimental hall of the PHENIX detector. 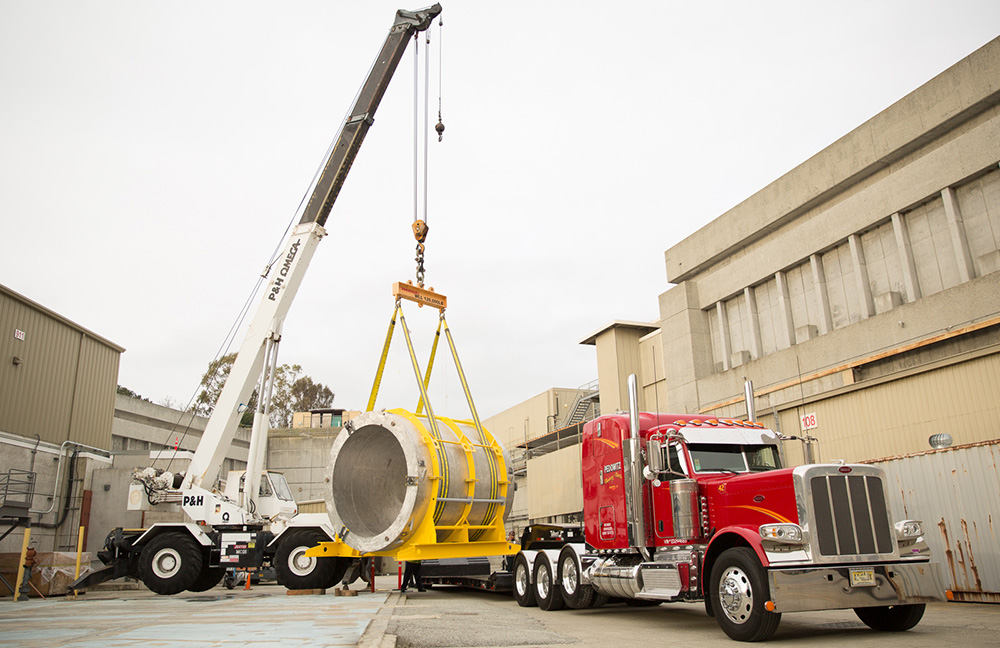 The Department of Energy is no stranger to sharing massive magnets. In the summer of 2013, the 50-foot-wide Muon g-2 ring moved from Brookhaven Lab to Fermilab, where it will search for undiscovered particles hidden in the vacuum.

“As you might imagine, shipping this magnet requires very careful consideration,” says Peter Wanderer, who heads Brookhaven’s Superconducting Magnet Division and worked with colleagues Michael Anerella and Paul Kovach on engineering for the big move. “You’re not only dealing with an oddly shaped and very heavy object, but also one that needs to be protected against even the slightest bit of damage. This kind of high-field, high-uniformity magnet can be surprisingly sensitive.”

Preparations for the move required consulting with one of the solenoid’s original designers in Italy, Pasquale Fabbricatore, and designing special shipping fixtures to stabilize components of the magnet.

After months of preparation at both SLAC and Brookhaven, the magnet—inside its custom packaging—was loaded onto a specialized truck this morning, and slowly began its journey to New York.

After the magnet arrives, a team of experts will conduct mechanical, electrical, and cryogenic tests to prepare for its use in the upgrade to the sPHENIX upgrade.

“We hope to have sPHENIX in action by 2021—including the BaBar magnet at its heart—but we have to remember that it is currently a proposal, and physics is full of surprises,” Morrison says.

The BaBar magnet will be particularly helpful in identifying upsilons—the bound state of a very heavy bottom quark and an equally heavy anti-bottom quark. There are three closely related kinds of upsilons, each of which melts, or dissociates, at a different well-defined trillion-degree temperature. This happens in the state of matter known as quark-gluon plasma, or QGP, which was discovered at RHIC.

“We can use these upsilons as a very precise thermometer for the QGP and understand its transition into normal matter,” Morrison says. “Something similar happened in the early universe as it began to cool microseconds after the big bang.”