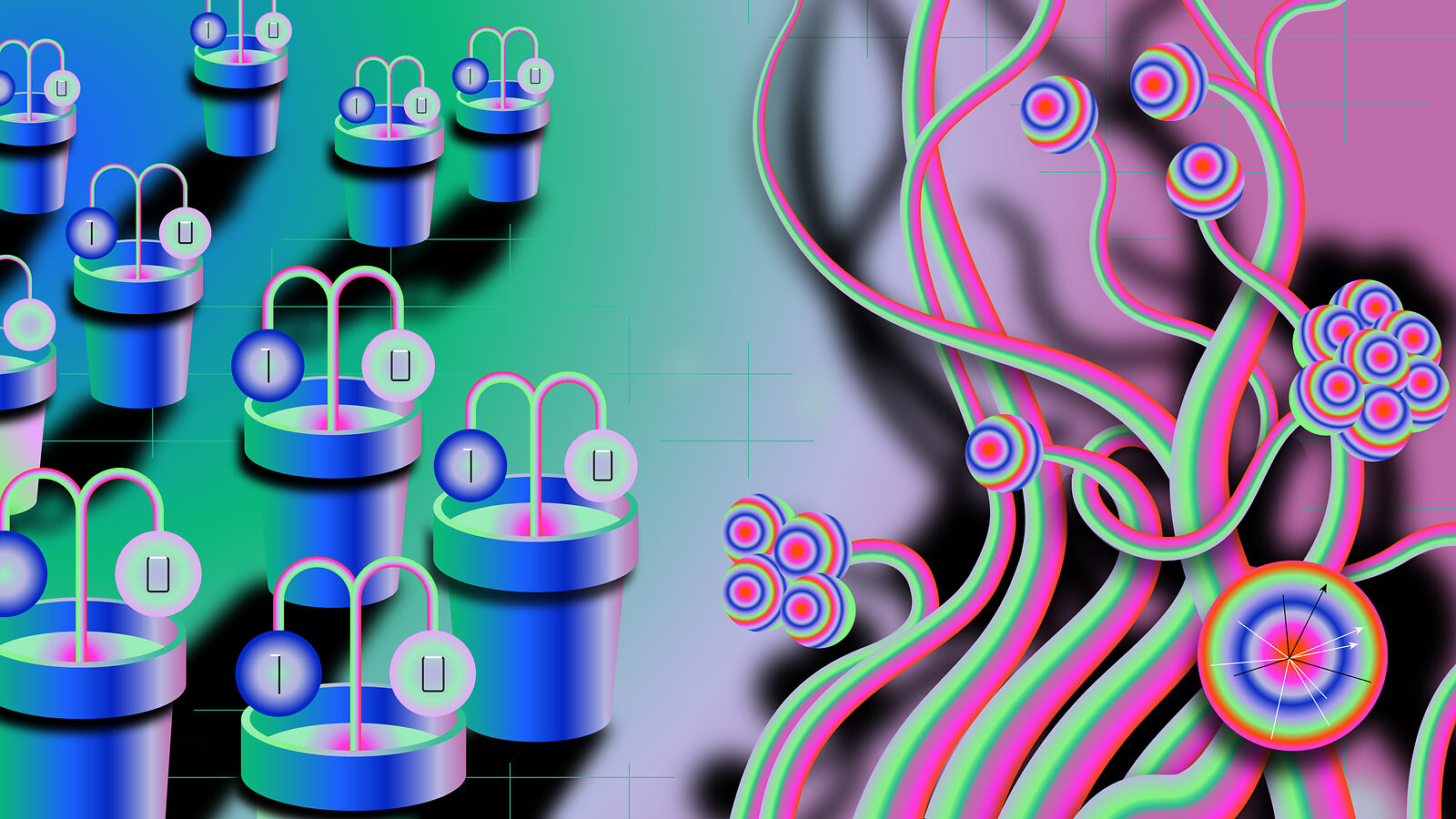 The first desktop computer was invented in the 1960s. But computing technology has been around for centuries, says Irfan Siddiqi, director of the Quantum Nanoelectronics Laboratory at the University of California, Berkeley.

“An abacus is an ancient computer,” he says. “The materials science revolution made bits smaller, but the fundamental architecture hasn’t changed.”

Both modern computers and abaci use basic units of information that have two possible states. In a classical computer, a binary digit (called a bit) is a 1 or a 0, represented by on-off switches in the hardware. On an abacus, a sliding bead can also be thought of as being “on” or “off,” based on its position (left or right on an abacus with horizontal rods, or up or down on an abacus with vertical ones). Bits and beads can form patterns that represent other numbers and, in the case of computers, letters and symbols.

But what if there were even more possibilities? What if the beads of an abacus could sit in between two positions? What if the switches in a computer could consult each other before outputting a calculation?

Entanglement allows a quantum computer to perform a complex task in a fraction of the time it would take a classical computer.

This is the fundamental idea behind quantum computers, which embrace the oddities of quantum mechanics to encode and process information.

“Information in quantum mechanics is stored in very different ways than in classical mechanics, and that’s where the power comes from,” says Heather Gray, an assistant professor and particle physicist at UC Berkeley.

The computer you may be using to read this article does something similar, counting by powers of two instead of 10s. In binary, the number 514 becomes 1000000010.

The more complex the task, the more bits or time a computer needs to perform the calculation. To speed things up, scientists have over the years found ways to fit more and more bits into a computer. “You can now have one trillion transistors on a small silicon chip, which is a far cry from the ancient Chinese abacus,” Siddiqi says.

But as engineers make transistors smaller and smaller, they’ve started to notice some funny effects.

The quantum twist on computing

Bits that behave classically are determinate: A 1 is a 1. But at very small scales, an entirely new set of physical rules comes into play.

“We are hitting the quantum limits,” says Alberto Di Meglio, the head of CERN’s Quantum Technology Initiative. “As the scale of classic computing technology becomes smaller and smaller, quantum mechanics’ effects are not negligible anymore, and we do not want this in classic computers.”

But quantum computers use quantum mechanics to their benefit. Rather than offering decisive answers, quantum bits, called qubits, behave like a distribution of probable values.

Di Meglio likens qubits to undecided voters in an election. “You might know how a particular person is likely to vote, but until you actually ask them to vote, you won’t have a definite answer,” Di Meglio says.

Qubits can be made from subatomic particles, such as electrons. Like other, similar particles, electrons have a property called spin that can exist in one of two possible states (spin-up or spin-down).

If we think of these electrons as undecided voters, the question they are voting on is their direction of spin. Quantum computers process information while the qubits are still undecided—somewhere in between spin-up and spin-down.

The situation becomes even more complicated when the “voters” can influence one another. This happens when two qubits are entangled. “For example, if one person votes yes, then an entangled ‘undecided’ voter will automatically vote no,” Di Meglio says. “The relationships become important, and the more voters you put together, the more chaotic it becomes.”

When the qubits start talking to each other, each qubit can find itself in many different configurations, Siddiqi says. “An entangled array of qubits—with ‘n’ number of qubits—can exist in 2n configurations. A quantum computer with 300 good qubits would have 2300 possible configurations, which is more than the number of particles in the known universe.”

“A qubit can get entangled with something else that you don’t have access to,” Siddiqi says. “Information can leave the system.”

An electron from the computer’s power supply or a stray photon can entangle with a qubit and make it go rogue.

“Quantum computing is not just about the number of qubits,” Di Meglio says. “You might have a quantum computer with thousands of qubits, but only a fraction are reliable.”

Because of the problem of rogue qubits, today’s quantum computers are classified as noisy intermediate-scale quantum, or NISQ, devices. “Most quantum computers look like a physics experiment,” Gray says. “We’re very far from having one you could use at home.”

But scientists are trying. In the future, scientists hope that they can use quantum computers to quickly search through large databases and calculate complex mathematical matrices.

Today, physicists are already experimenting with quantum computers to simulate quantum processes, such as how particles interact with each other inside the detectors at the Large Hadron Collider. “You can do all sorts of cool things with entangled qubits,” Gray says.