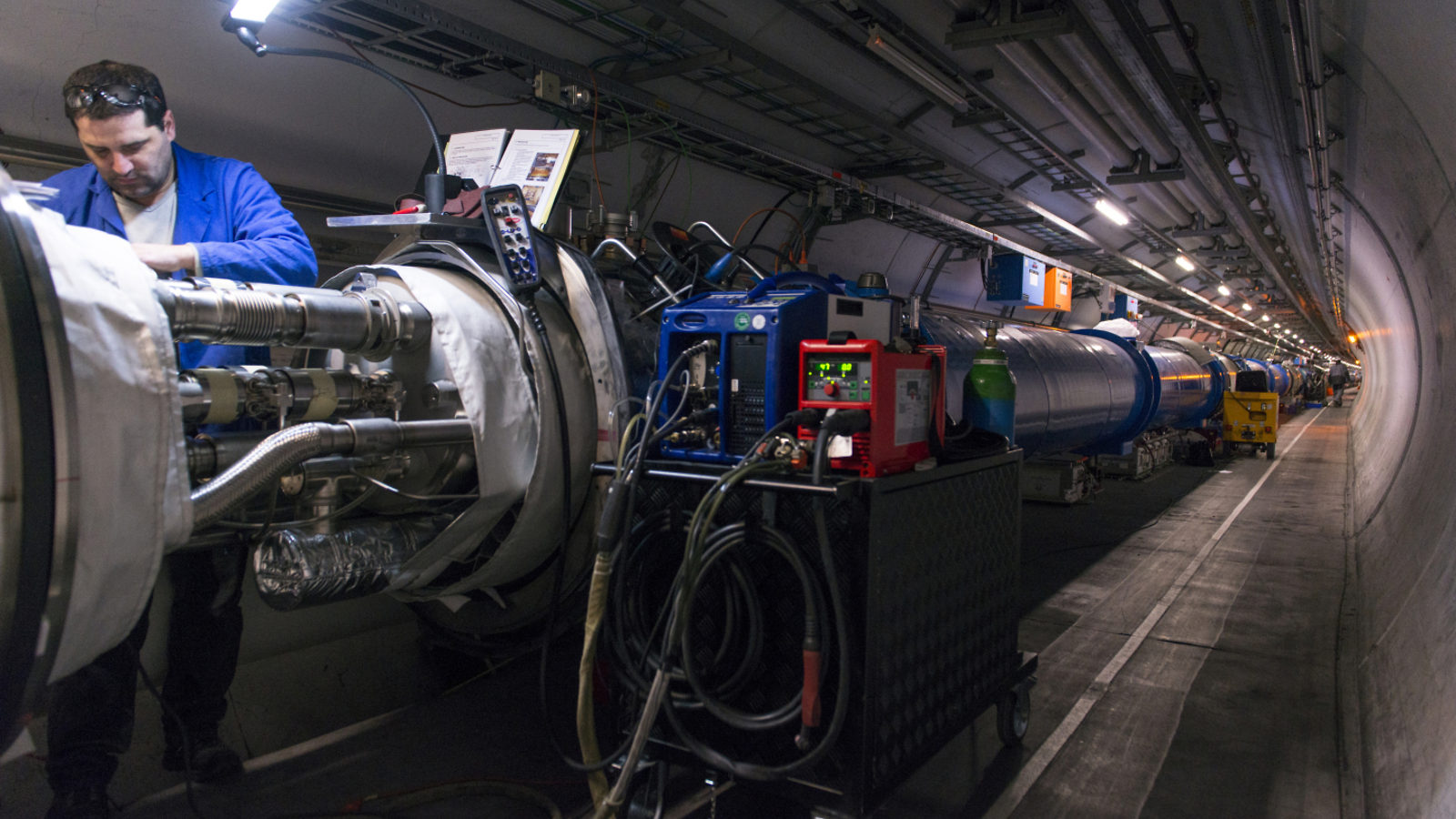 The most powerful particle accelerator on Earth has been asleep for the past two years. Soon it will reawaken for its second run.

Since shutting down in early 2013, the LHC and its detectors have undergone a multitude of upgrades and repairs. When the particle accelerator restarts, it will collide protons at an unprecedented energy: 13 trillion electron volts. Scaled up into our macroscopic world, the force of these proton-proton collisions is roughly equivalent to an apple hitting the moon hard enough to create a crater 6 miles across.

The upgraded capabilities of the ATLAS, CMS, ALICE and LHCb detectors—plus the LHC’s extra boost of power—will give scientists access to a previously inaccessible realm of physics.

To the Higgs boson …and beyond!

In the first run of the LHC, the ATLAS and CMS experiments ended the 50-year hunt for the Higgs boson, which was predicted the Standard Model of particles and forces. Now scientists want to know if the Higgs they found is hiding any surprises.

“All the properties of the Higgs boson are already predicted by the Standard Model, so it’s our job to go out and measure those properties and see if they agree,” says Jay Hauser, a University of California, Los Angeles physicist working on the CMS experiment. “If anything disagrees, it could be a window to new physics.”

But even if the Higgs agrees with all predictions, something about it still seems a bit strange.

“The Higgs mass doesn’t make any sense,” says Beate Heinemann, a physicist from University of California, Berkeley and Lawrence Berkeley National Laboratory and the deputy head of the ATLAS experiment. “It would make much more sense if it was much heavier, which is why we think there must be something that protects the Higgs boson and gives it a lower mass.”

This Higgs bodyguard could be anything from supersymmetric particles to dark matter to extra dimensions.

“We have quite a few puzzles,” Heinemann says. “We think that there should be new physics at this energy scale, but we don’t know what it is yet.”

Bringing it back to the big bang

Scientists on the ALICE experiment have their sights on something else.

In the beginning, the entire universe—all the stars, planets and galaxies—were part of a hot soup of matter called quark gluon plasma. The LHC can recreate those conditions in miniature by colliding beams of heavy atomic nuclei, which it does for four weeks per year. The ALICE detector specializes in investigating the properties of this primordial material.

“The quark gluon plasma is so hot that ordinary protons and neutrons cannot exist in it,” says Peter Jacobs, a Berkeley physicist working on the ALICE experiment. “Quarks and gluons move around in it and interact in new ways that we haven’t seen before. It’s a new form of matter and we want to know how it behaves and what its properties are—like its structure and how it acts at different temperatures.”

In the first run of the LHC, the ALICE experiment was able to characterize many aspects of this weird semi-liquid plasma, such as its viscosity.

“The quarks and gluons interact more than we originally thought, indicating that the quark-qluon plasma is more like a liquid than a gas; indeed, almost as “perfect” a liquid as nature allows,” Jacobs says.

But there is still more to investigate.

“Run I was a discovery run, and we were able to explore many new things and developed a lot of curiosities,” Jacobs says. “During Run II, we will be able to explore these curiosities more deeply and give them quantitative values instead of just being able to describe them qualitatively.”

The case of the missing antimatter

Scientists suspect that the big bang acted like a universe-sized supercollider that brought equal parts of matter and antimatter into existence. But where did all of the antimatter go?

The LHCb experiment is one of the world’s best early-universe detectives and looks for clues in the case of the disappearing antimatter.

“We should have started with equivalent amount of matter and antimatter in the universe,” says Michael Williams, an MIT physicist working on the LHCb experiment. “But now, all we see is matter, and there is no way the Standard Model can explain this huge discrepancy. There must be some other way matter and antimatter behave differently.”

To uncover the root of this huge discrepancy, the LHCb experiment does precision measurements of subatomic processes. LHCb scientists then compare the Standard Model predictions with these experimental observations to see how well they match up.

Thus far, the Standard Model has been hard to break. But Williams thinks that increasing the precision of these measurements could start to show where the cracks are.

“You never know if you're on the cusp of making a discovery,” Williams says. “In Run II, we will measure lots of processes with a much higher precision, and this might reveal something that the Standard Model is not explaining.”