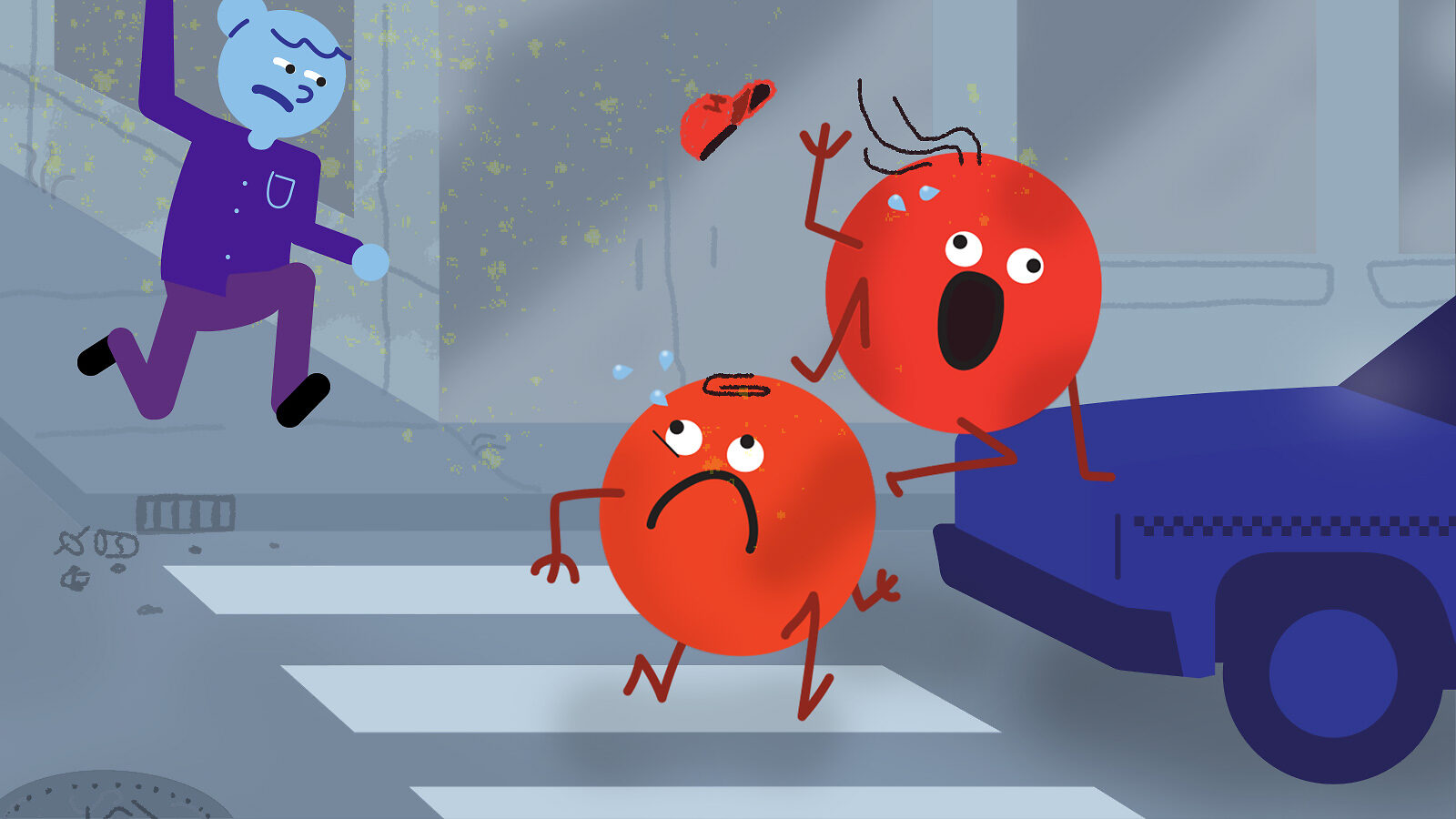 In 2011, physicist Javier Duarte and his friends ran the surface roads above the 17-mile circumference of the Large Hadron Collider, a subterranean particle accelerator located on the Franco-Swiss border. They eventually finished the tour, but it took them four increasingly agonizing hours.

“The first half was very pleasant, but the second half was much tougher,” he says. “I hadn’t trained appropriately and was not super well prepared.”

A new pair of running shoes or some carb-loaded snacks might have improved Duarte’s performance—but only slightly. To find his stride and make good time, Duarte needed more than refinement. He needed to fundamentally change his approach to running.

“We want to learn more about the Higgs field and in particular, the shape of its potential and what Higgs field configurations cost the least energy.”

Three years and a comprehensive training program later, Duarte tackled a much longer run: He finished the Chicago marathon in three hours and 15 minutes.

Duarte once again finds himself in a marathon, one with a fixed time limit and a more elusive finish line. He’s looking for evidence of the Higgs self-coupling, a process so rare that scientists have worried they might never discover it at the LHC.

Scientists initially projected that even after combining data from the two general-purpose detectors at the LHC, and even with an upgrade from the LHC to the High-Luminosity LHC, “we would still fall somewhat short of the full concrete observation of this phenomenon,” says Duarte, who is now a professor at the University of California, San Diego and whose research is supported by the US Department of Energy.

To find this rare process—which can only be observed when Higgs particles are produced in pairs—scientists on the ATLAS and CMS experiments needed a new approach. Today, they are rethinking how they filter, process and evaluate their data—a shift they hope will get them across the finish line.

The Higgs boson is a fundamental particle that was discovered by the ATLAS and CMS experiments in 2012. Since the Higgs discovery, scientists have tried to learn everything they can: its mass, its traits, its lifetime and how it plays with the other fundamental particles. But one thing scientists have yet to see is how the Higgs interacts with itself. "That is the missing piece,” says Liza Brost, an ATLAS physicist at DOE’s Brookhaven National Laboratory.

“We want to learn more about the Higgs field and in particular, the shape of its potential and what Higgs-field configurations cost the least energy,” says CMS physicist Cristina Mantilla Suarez, a Lederman postdoctoral fellow at Fermi National Accelerator Laboratory. “It sounds theoretical but has huge implications.”

According to Duarte, the shape of the Higgs potential is a kind of cosmic blueprint that guided how the energy that was released during the Big Bang solidified into the stable matter we see today.

“The Higgs is intimately linked to the evolution of the universe, how the universe came to be the way it is, and its ultimate fate,” Duarte says. “The Higgs links big cosmic questions to the microscopic scales.”

Even though the Higgs field exists everywhere, Higgs bosons have only a one-in-a-billion chance of materializing during collisions in the LHC. The collisions convert the energy of the colliding particles into mass, momentarily producing new particles.

After more than a decade of operation, scientists estimate that the LHC has generated about 7.5 million Higgs bosons. But they estimate that out of quadrillions of collisions, the LHC has produced only about 4,500 Higgs-boson pairs, which is the only way scientists can see how the bosons interact with one another.

“Di-Higgs production is so incredibly rare, but we know it’s there,” Suarez says. “The challenge is that it is very easily confused with other processes that look the same.”

Higgs bosons are so short-lived that scientists don’t see them directly. Instead, scientists use gigantic detectors to capture and measure the particles that the Higgs bosons produces when it decays.

In the hunt for Higgs boson twins, both CMS and ATLAS have turned their attention to the most common Higgs boson decay product: bottom quarks, which are produced about 58% of the time.

Teasing out the tiny portion of bottom quarks that originally came from a Higgs boson—as opposed to anything else—is remarkably difficult, like a Where’s Waldo? book in which all the characters are dressed in red and white stripes and far too small to see.

Two ways of looking at a Higgs

That’s why researchers at CMS and ATLAS are studying specific subsets of bottom quark events.

Even though Higgs bosons are microscopic, they are not exempt from certain laws of motion. “If I toss a soccer ball to my friend while walking past him, the ball will travel almost perpendicular to my path,” Duarte says. “But if I do this from a car traveling at 60 miles per hour, that soccer ball is going to have a lot of forward momentum.”

Because of their unique interactions, Higgs bosons are produced with large momentum more easily than other lighter particles that also produce bottom quarks. So “boosted” bottom quarks are more likely to come from Higgs bosons.

“We get fewer signal events, but we also get fewer background events,” Duarte says. “The ratio increases in our favor. These boosted bottom quarks from the Higgs also look very different from the other sources, which we can use to our advantage.”

In contrast, Brost and her colleagues on ATLAS have been looking to the lower end of the energy spectrum. Brost studies double-Higgs events in which one Higgs boson transforms into a pair of bottom quarks and the other Higgs boson transforms into two photons, the particle form of light. While this process is very rare—only 0.26% of all double-Higgs decays—it’s also phenomenally clear.

“That’s how we designed the calorimeters in our detector; to see photons,” Brost says. “This has been one of our strongest channels.”

Scientists are using new sophisticated computational tools to narrow down the search even further.

“It’s a problem of how many times we’re willing to slice versus how much cheese we lose,” Brost says.

More restrictive requirements help scientists remove unwanted background events. But it also means they lose more of their signal. To minimize signal loss, physicists have turned to machine learning. A machine-learning algorithm can learn the differences between signal and background and scrape away the uninteresting events with delicate precision.

“The first time we applied machine-learning techniques [on ATLAS data], it blew everything out of the water,” Brost says. “It was so much more sensitive than anybody expected. Then we had to spend the next year or two proving to everybody that it wasn't wrong.”

On CMS, Suarez was developing machine-learning algorithms for other projects when she realized they could be applied to finding Higgs pairs.

When Suarez first implemented a new algorithm, she was cautiously optimistic. “New experimental tools need to be validated and tested,” Suarez says. “This tool was so new that it wasn’t widely available. It took a lot of work to put it into our analysis and apply it to the data.”

She worried that if she couldn’t get the new software to work, she would have wasted several months with nothing to show. But according to Suarez, “sometimes you have to take the risk.”

Hot on the trail

The risk paid off. With the new software and machine-learning techniques, Suarez and her colleagues discovered that their analysis is just as sensitive as the techniques CMS scientists have been honing for years.

"Any new method can become a significant improvement when we combine them all together, especially long-term,” Suarez says. “We keep developing new ways to probe the Higgs self-coupling earlier and with less data. The sooner we know how strongly the Higgs interacts with itself, the sooner we'll be able to answer many more questions.”

These new methods are helping ATLAS researchers as well. Brost and her colleagues have been doing back-of-the-envelope calculations to see how their improved particle reconstruction and data filtering will impact their searches for double Higgs bosons during Run 3 of the LHC, which just began.

“We’ve been doing scribbles on the back of the envelope and we’re tantalizingly close,” Brost says. “It’s an exciting time.”

To go from evidence to discovery in this area, scientists predict they will still need the power of the High-Luminosity LHC, which is scheduled to start up in 2029. It will increase the collision rate by at least a factor of 5 throughout a decade of planned operations. With that much more data, scientists will be able to explore in detail how Higgs particles interact with each other.