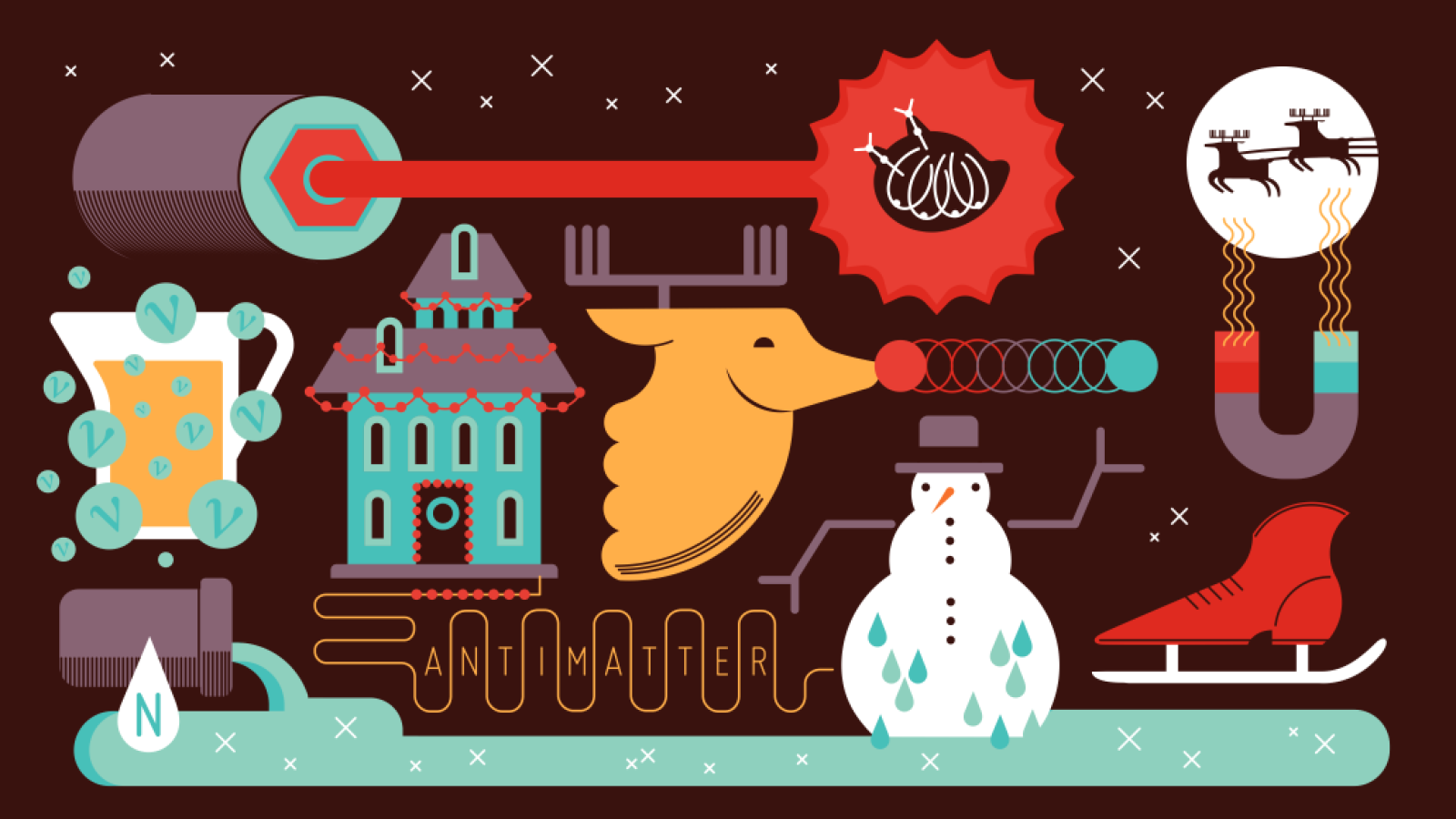 Ever wonder if a particle collider could give you a faster way to cook your turkey, or how much antimatter it would take to power your holiday lights? Rudolph, Frosty and the gang invade the laboratory to find the answers.

The holidays are here, it's time to leave the labs
But with physicists gone, machines are up for grabs
Elves on experiments, Rudolph the science whiz:
Can they answer questions in a holiday quiz?

As symmetry pauses for a long winter's nap, we leave you with a series of rhyming physics questions and their surprising answers. Enjoy! We'll see you next year!

This winter the house fills with holiday cheer
Mouth-watering smells from the meal of the year
In the oven a turkey glistens like a dream
How fast could you cook it with a proton beam?

Cooking a turkey in a conventional oven (with a power of 4400 watts) takes about four hours, or 17,600 watt-hours of energy.

The Large Hadron Collider, the highest-energy accelerator in the world, accelerates a bunch of about 100 billion protons to nearly the speed of light every 75 nanoseconds. That works out to about 1300 quadrillion protons per second. At 4 tera-electronvolts per proton, that’s about 850 billion watts.

Comparing the oven to the proton beam, we find that the LHC's beam contains enough energy to cook the turkey in about 0.0007 seconds!

Rooftop lights keep the neighborhood aglow,
make colorful reflections dance in the snow
What would it take, one of these snowy nights,
to use antimatter to power your lights?

The most antimatter ever collected (as near as we can find) was about 8 picograms. This would power our strand of lights for only about 2.4 minutes!

The most famous reindeer guides Santa’s sleigh
Lucky for him, his red nose leads the way
How fast would Rudolph need to fly into view
for redshift to turn his red nose to blue?

The wavelength of red light is 750 nanometers, while blue is 350 nanometers. Let’s call the ratio between these wavelengths “r.” Special relativity tells us that r2 = (1+b)/(1-b), where b is Rudolph’s velocity divided by the speed of light. Plugging in the numbers, we find that Rudolph would have to be coming toward you at 64 percent the speed of light (or about 430,000,000 miles per hour) for his nose to appear blue!

The gait of the reindeer that drive Santa’s sleigh
Is airy and light, yet how much must they weigh!
What magnet could levitate one in air?
How strong it must be to support nine reindeer!

With a superconducting reindeer weighing about 200 pounds and having a horizontal cross-sectional area of 900 square inches, we could levitate the reindeer with a field of some 200 kiloGauss. If the reindeer is suspended by a current running in a cable that is 1000 meters below him, it would need to be carrying 100 million amps. (You probably wouldn't want to trip over this puppy.) If the cable is only a meter away from the reindeer, one could get by with 100,000 amps, and if the cable were only 1 cm away, we could get down to a much more manageable 1000 amps.

It’s probably worth noting that such a reindeer suspended in this manner would be easy to spook, so it’s a good thing the trip takes relatively little time!

The naughty and nice number well in the billions.
Compiling those names must take bytes in the millions.
The grid to the rescue! How long would it take
For Santa to list them, for goodness’ sake?

There are about 2 billion children in the world. Because Santa is, well, Santa, let’s assume that he has access to the world’s fastest computer: Oak Ridge National Laboratory’s Titan supercomputer, which at peak performance can make 27,000 trillion calculations per second.

Using Titan, those 200 billion calculations would take about 7 millionths of a second. Not bad, Santa!

The ice rink at Rockefeller Center is huge.
To cool it with liquid nitrogen would mean a deluge
of the super-cold stuff. How much would one need
To freeze the rink’s water to skate and succeed?

This is a tough one. To simplify things a bit, let’s assume that Rockefeller Center is at atmospheric pressure and that there’s no heat loss in the process.

So how much water is in the Rockefeller ice rink? According to the rink’s website, the rink measures 122 by 59 feet. If we assume an average thickness of 1 centimeter, then there’s 1766 gallons of water. It would take about 707 gallons of liquid nitrogen to freeze.

During the Tevatron particle collider’s second run, Fermilab received 21 liquid-nitrogen truck deliveries per week, each truck carrying 7000 gallons of the stuff. That's 147,000 gallons of liquid nitrogen per week—enough to freeze 58,800 gallons of water!

On Christmas Eve children must be in bed on time
Or else Santa won’t visit, oh what a crime!
Quantum mechanics makes the answer clear
What happens if a child spots Santa this year?

The question of how Santa Claus manages to deliver gifts to many millions of children worldwide has defied analysis for hundreds of years.

Some have approached the problem assuming that Santa, his sleigh and the reindeer must be traveling at enormous velocities to accomplish his task, but inevitably a first pass at the numbers reveals that atmospheric ablation would take a heavy toll on the reindeer in a very short time. Obviously these assumptions are therefore incorrect.

A more recent approach involves treating Santa more like an elementary particle, with Santa and his payload occupying a probability cloud surrounding the Earth. This frees him from the burden of actually being in any specific location or traveling at any particular velocity.

One danger that becomes apparent if this model is correct is that if even one child is not asleep in bed on Christmas Eve and then somehow manages to observe Santa, the wave function will collapse, the probability that he is occupying that child's house goes to 1, and nobody else will get any presents.

One might then ask if that would not be ideal motivation for a child to remain awake, however all those presents Santa is carrying have to go somewhere. The observer in this case might not only receive the gifts they had asked for, but might be buried in many of tons of gifts destined for the rest of the planet: clearly a disastrous scenario.

Antimatter's tough to make, its energy to harness.
It's not as though it's ready when you need to heat a furnace.
And heating Frosty is a task that asks one to be subtle.
How much antimatter does it take to melt him to a puddle?

If we didn’t have any antimatter on hand, we could always melt him with the calories stored in about 100 Christmas cookies. We’d just need to figure out how to convert that energy into heat first. Anyone hungry?

Neutrinos travel light-years before they are found out:
Interact they so rarely as they travel on their route.
But using only eggnog, how difficult would it be
To stop each day one neutrino in its efforts to flee?

We’ve always wanted to conduct an experiment with eggnog! Let’s sneak into the MINERvA detector at Fermilab and refill its 165-gallon water target vessel with the sweet drink.

The NuMI neutrino beam, which sends neutrinos through the MINERvA detector, is very intense and can deliver 300 trillion neutrinos—each with an average energy of 3 giga-electronvolts—to each square meter of eggnog each day. At that energy, 2.25x10-42 of those neutrinos will interact per proton or neutron in that square meter. To see one neutrino interaction per day, we'll need 1.5x1027 protons or neutrons. Avogadro's Number tells us there are 6.022x1023 protons or neutrons in a gram, so we'll need 2.4 kilograms of eggnog, about 60 percent of a gallon.

I suppose we don't need all 165 gallons of eggnog we brought to fill the detector, then. Time for a party?

Every city, every town in the world has a Grinch
At the site of good cheer they don’t smile but squinch
Of course estimates were made to answer these questions
How long before we get the first corrective suggestion?

Editor’s note: Many thanks to David Atlee, Roger Dixon, Patrick Fox, Dan Hooper, Todd Johnson, Bryce Littlejohn, Ruth Pordes, Jennifer Raaf, James Santucci, Brian Tice and Felix Yu for their good-natured assistance with these answers! It wouldn’t have been half as much fun without you.
Follow
Use your browser’s print dialog box to create a pdf.
Popular on symmetry