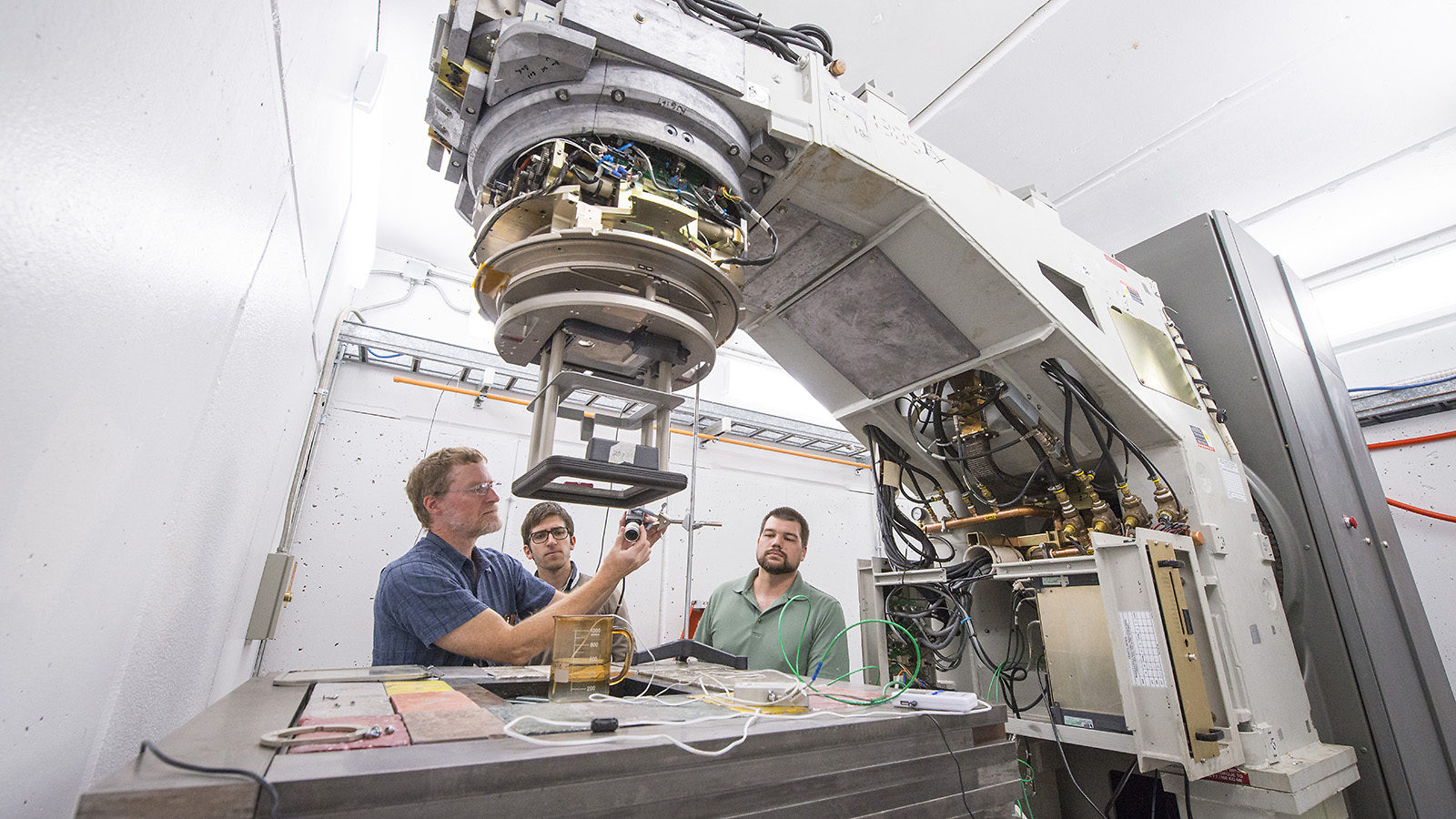 Particle accelerators are the engines of particle physics research at Fermi National Accelerator Laboratory. They generate nearly light-speed, subatomic particles that scientists study to get to the bottom of what makes our universe tick. Fermilab experiments rely on a number of different accelerators, including a powerful, 500-foot-long linear accelerator that kick-starts the process of sending particle beams to various destinations.

But if you’re not doing physics research, what’s an accelerator good for?

It turns out, quite a lot: Electron beams generated by linear accelerators have all kinds of practical uses, such as making the wires used in cars melt-resistant or purifying water.

A project called Accelerator Application Development and Demonstration (A2D2) at Fermilab’s Illinois Accelerator Research Center will help Fermilab and its partners to explore new applications for compact linear accelerators, which are only a few feet long rather than a few hundred. These compact accelerators are of special interest because of their small size—they’re cheaper and more practical to build in an industrial setting than particle physics research accelerators—and they can be more powerful than ever.

“A2D2 has two aspects: One is to investigate new applications of how electron beams might be used to change, modify or process different materials,” says Fermilab’s Tom Kroc, an A2D2 physicist. “The second is to contribute a little more to the understanding of how these processes happen.”

To develop these aspects of accelerator applications, A2D2 will employ a compact linear accelerator that was once used in a hospital to treat tumors with electron beams. With a few upgrades to increase its power, the A2D2 accelerator will be ready to embark on a new venture: exploring and benchmarking other possible uses of electron beams, which will help specify the design of a new, industrial-grade, high-power machine under development by IARC and its partners.

It won’t be just Fermilab scientists using the A2D2 accelerator: As part of IARC, the accelerator will be available for use (typically through a formal CRADA or SPP agreement) by anyone who has a novel idea for electron beam applications. IARC’s purpose is to partner with industry to explore ways to translate basic research and tools, including accelerator research, into commercial applications.

“I already have a lot of people from industry asking me, ‘When can I use A2D2?’” says Charlie Cooper, general manager of IARC. “A2D2 will allow us to directly contribute to industrial applications—it’s something concrete that IARC now offers.”

Speaking of concrete, one of the first applications in mind for compact linear accelerators is creating durable pavement for roads that won’t crack in the cold or spread out in the heat. This could be achieved by replacing traditional asphalt with a material that could be strengthened using an accelerator. The extra strength would come from crosslinking, a process that creates bonds between layers of material, almost like applying glue between sheets of paper. A single sheet of paper tears easily, but when two or more layers are linked by glue, the paper becomes stronger.

“Using accelerators, you could have pavement that lasts longer, is tougher and has a bigger temperature range,” says Bob Kephart, director of IARC. Kephart holds two patents for the process of curing cement through crosslinking. “Basically, you’d put the road down like you do right now, and you’d pass an accelerator over it, and suddenly you’d turn it into really tough stuff—like the bed liner in the back of your pickup truck.”

This process has already caught the eye of the U.S. Army Corps of Engineers, which will be one of A2D2’s first partners. Another partner will be the Chicago Metropolitan Water Reclamation District, which will test the utility of compact accelerators for water purification. Many other potential customers are lining up to use the A2D2 technology platform.

“You can basically drive chemical reactions with electron beams—and in many cases those can be more efficient than conventional technology, so there are a variety of applications,” Kephart says. “Usually what you have to do is make a batch of something and heat it up in order for a reaction to occur. An electron beam can make a reaction happen by breaking a bond with a single electron.”

In other words, instead of having to cook a material for a long time to reach a specific heat that would induce a chemical reaction, you could zap it with an electron beam to get the same effect in a fraction of the time.

“The new, compact accelerator that we’re developing will be high-power and high-energy for industry,” Cooper says. “This will enable some things that weren’t possible in the past. For something such as environmental cleanup, you could take the accelerator directly to the site.”

While the IARC team develops this portable accelerator, which should be able to fit on a standard trailer, the A2D2 accelerator will continue to be a place to experiment with how to use electron beams—and study what happens when you do.

“The point of this facility is more development than research, however there will be some research on irradiated samples,” says Fermilab’s Mike Geelhoed, one of the A2D2 project leads. “We’re all excited—at least I am. We and our partners have been anticipating this machine for some time now. We all want to see how well it can perform.”