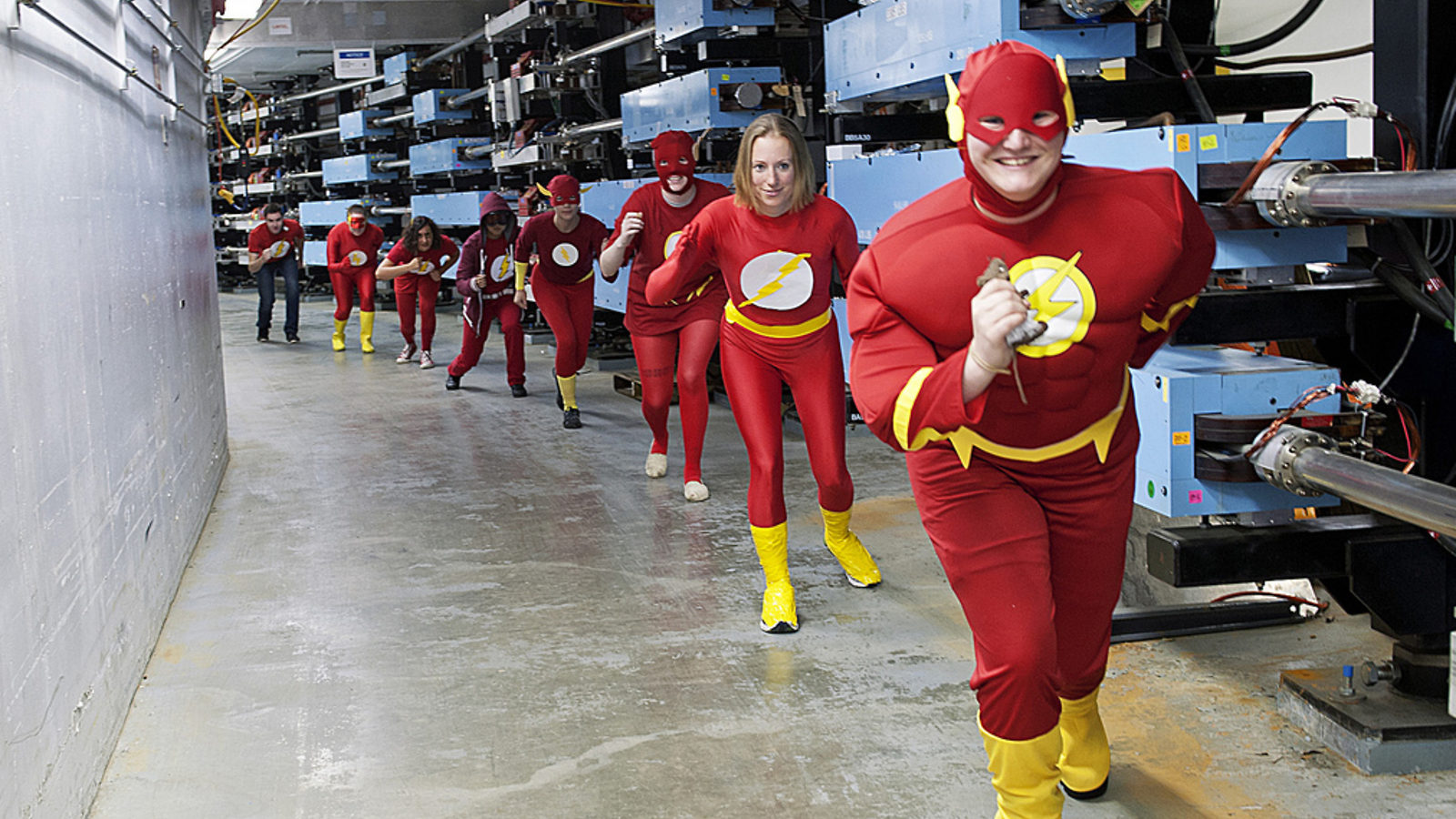 Like many of the national labs, Jefferson Lab gets its fair share of unusual requests. Emails and phone calls come from around the globe posing new theories about black holes or seeking help solving high school physics homework assignments.

So it was not so surprising when an email arrived during the week of Aug. 12 asking if Jefferson Lab had a particle accelerator and, if so, if the writer could have her photo taken alongside it while dressed as the comic book character The Flash. Soon, a second email arrived, followed by another and another—all with the same request. The trickle of messages became a steady stream before someone finally explained that these petitions stemmed from something called the Greatest International Scavenger Hunt The World Has Ever Seen, or GISHWHES.

GISHWHES participants form international teams, which are challenged to perform absurd tasks or acts of human kindness to collect points. According to the GISHWHES website, the winning team gets an all-expense paid trip to Vancouver and a chartered seaplane flight to a majestic island for fish stew, a séance and “something strange, exciting and Viking-related” with the event’s host, actor Misha Collins, known for his role in the TV series Supernatural.

With more than a dozen requests in hand, Jefferson Lab’s Public Affairs office organized a special tour on Aug. 15. Thirteen people signed up.

They saw more than just the lab’s accelerator, where they took photos to submit to GISHWHES and post to social media. They also visited the free-electron laser, an experimental hall and the work areas where the lab builds accelerator components. The self-described science geeks and, for the most part, recent college grads couldn’t believe their good fortune as they bantered with each other and curious members of the lab’s staff who snapped photos on their cell phones.

Some participants realized they could score additional GISHWHES points by having their photos taken next to a laser warning sign while holding a burrito. A quick trip to the lab’s cafeteria and a chat with the chef resulted in an impromptu photo session at the free-electron laser, burrito at the ready.

The GISHWHESers brought a bit of comic relief to a typical work day, while also providing an opportunity to educate a new audience about the national labs and their research missions.

As one visitor later tweeted: “it was so cool!! we went to jefferson lab and they gave us an extended tour too! science overload for sure”[sic]. 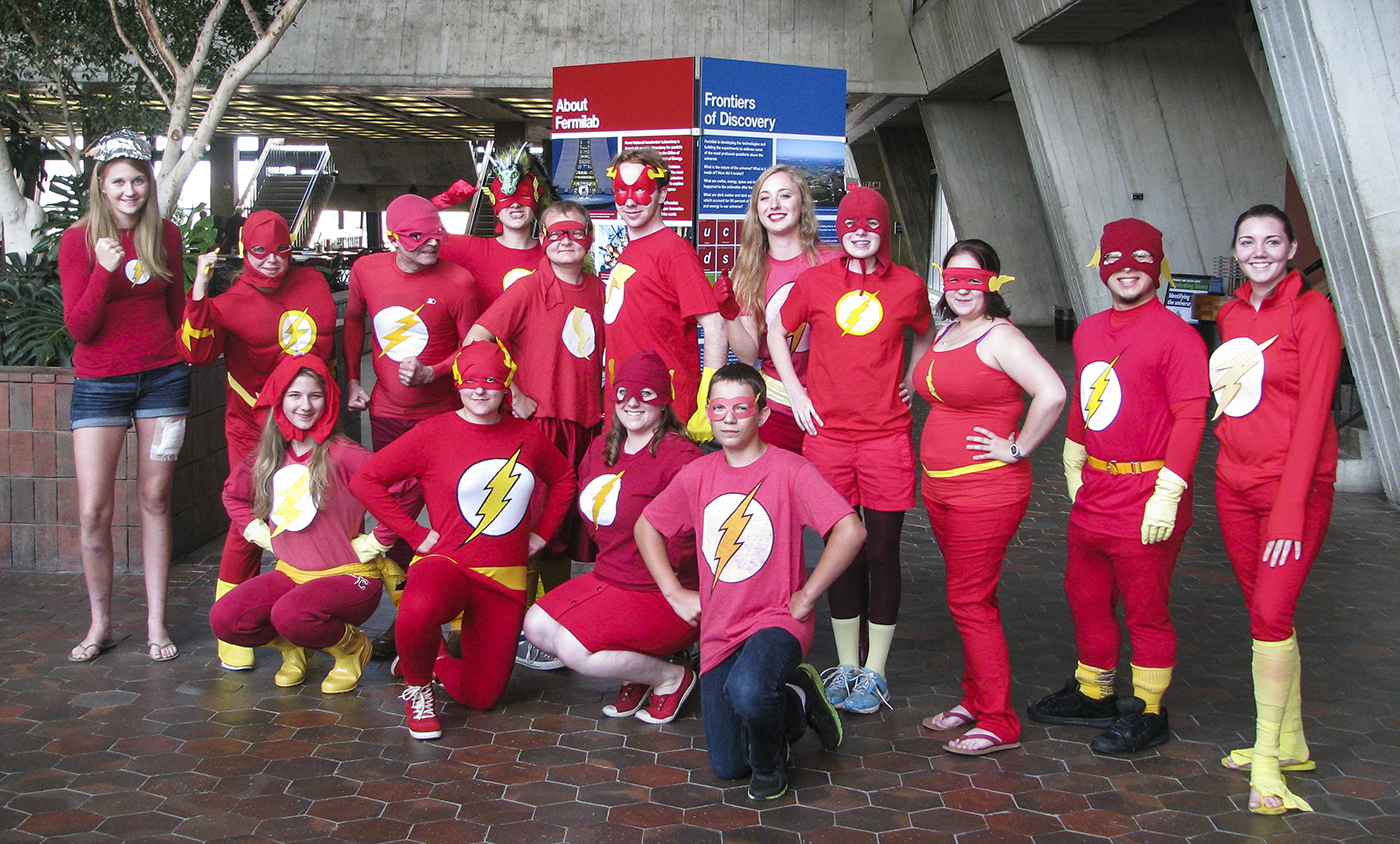 Jefferson Lab wasn’t the only national laboratory to be invaded by The Flash last week. Halfway across the country, Fermilab's regularly scheduled Wednesday public tour swelled with about 20 Flash-garbed GISHWHES participants. While the regular tour participants watched—many giggling as they snapped their own photos—this Flash mob posed in the atrium of Wilson Hall. They then headed over to the Linear Accelerator gallery, where they took their own photos for the scavenger hunt, many pretending to run as quickly as an accelerated particle. Most stuck around for the full tour, many getting to see Fermilab for the first time.

Andre Salles, Fermilab
Like what you see? Sign up for a free subscription to symmetry!
Follow
Use your browser’s print dialog box to create a pdf.
Popular on symmetry