A new Daya Bay result advances our understanding of neutrinos by precisely measuring their oscillation behavior at different energies. 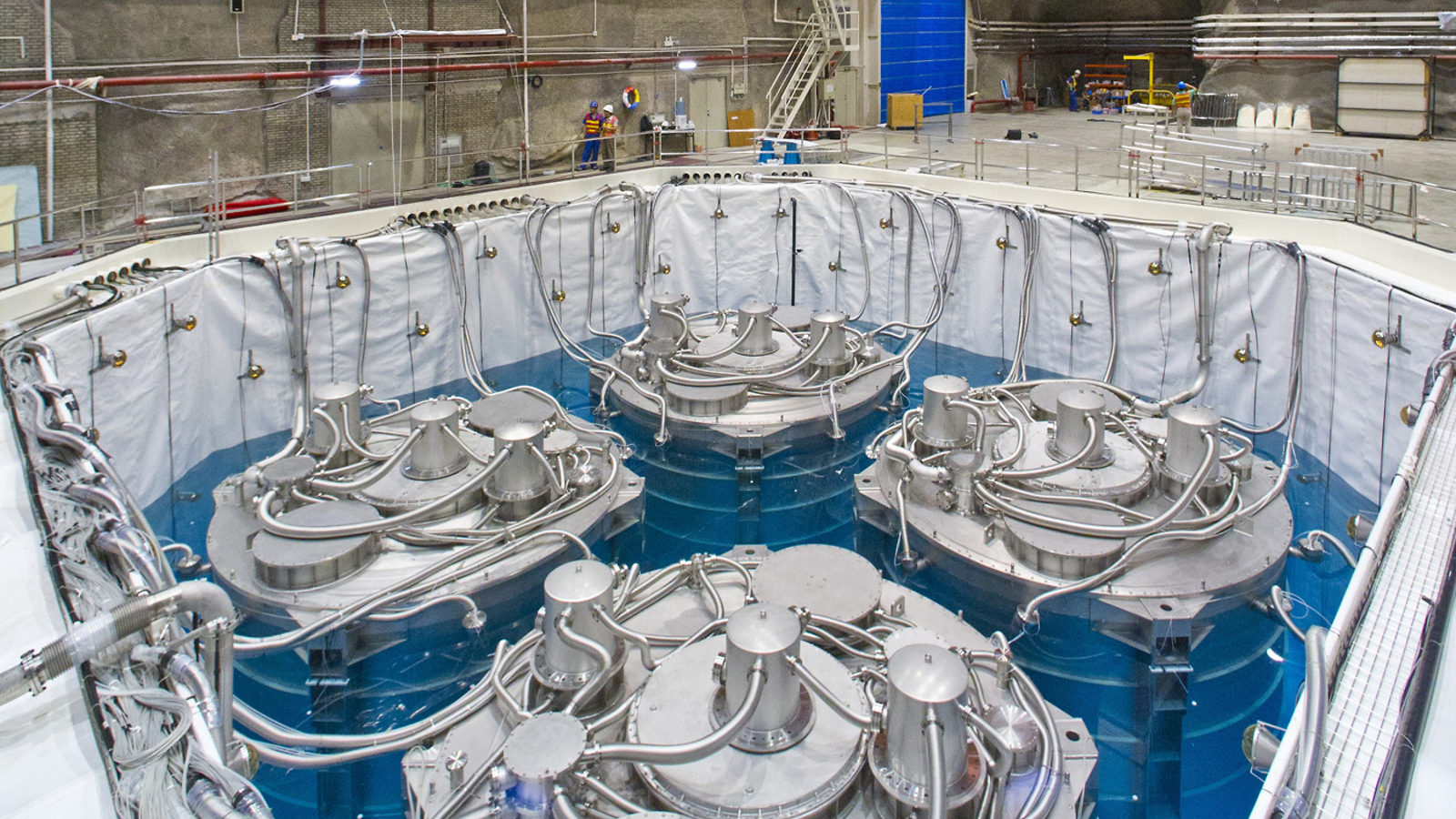 Scientists on an experiment that in 2012 revealed an important aspect of neutrinos announced this week that they had further contributed to our understanding of the puzzling elementary particles.

Neutrinos come in three flavors, and they oscillate, or change from one to another, as they travel—unlike any other fundamental particle we know. On Wednesday members of the Daya Bay experiment announced that they had made the first measurement of how neutrino oscillation varies with neutrino energy at a short distance. The Daya Bay detectors (pictured above) study neutrinos produced by a set of reactors at a nuclear power plant in Southern China near Hong Kong.

Scientists on the Daya Bay experiment, which includes more than 200 members from six countries and regions, were able to confirm this by studying the antimatter partners of electron neutrinos. The experiment can detect these particles, but not the other two flavors of neutrinos. So, from the standpoint of a Daya Bay detector, when the electron-flavor neutrinos oscillate to different flavors, they seem to disappear.

The scientists carefully measured the energies of neutrinos interacting in the detectors. “It’s like we are doing many small experiments simultaneously, each with a different energy,” says Kam-Biu Luk, a co-leader of the experiment and a scientist with the University of California, Berkeley, and Lawrence Berkeley National Laboratory. “We can then map out the oscillation pattern.”

Daya Bay scientists confirmed that the particles disappeared at different rates depending on their energies in a precisely predictable manner.

Making this measurement is an important technical achievement that brings scientists closer to using reactor experiments to sort out the masses of the different types of neutrinos, says Milind Diwan, a Brookhaven National Laboratory scientist on the Daya Bay experiment.

The mystery of the neutrino masses is one of the major unanswered questions in neutrino physics.

With their latest result, Daya Bay scientists were able to measure precisely one of these mass splits, confirming the previous best measurement by the MINOS experiment at Fermilab.

“In principle, if we can measure all of the differences between the masses to very high precision, we should be able to deduce their order,” Luk says. “This is a step toward solving the problem of the mass hierarchy.”

While it will take higher-precision experiments to really figure out neutrino masses, Wednesday’s Daya Bay result shows that reactor experiments are capable of making the necessary measurements.

In addition, this week’s result is a step toward a different way of searching for new discoveries. Physicists could measure the energy dependence of neutrino oscillations at reactors and compare it to the same measurement made at experiments (such as the proposed Long Baseline Neutrino Experiment) that study higher-energy neutrinos produced with particle accelerators. If they do not match, that could be a sign that particle physics theory is missing something.

“That’s the excitement of this physics,” Diwan says. “It’s not complete yet.”