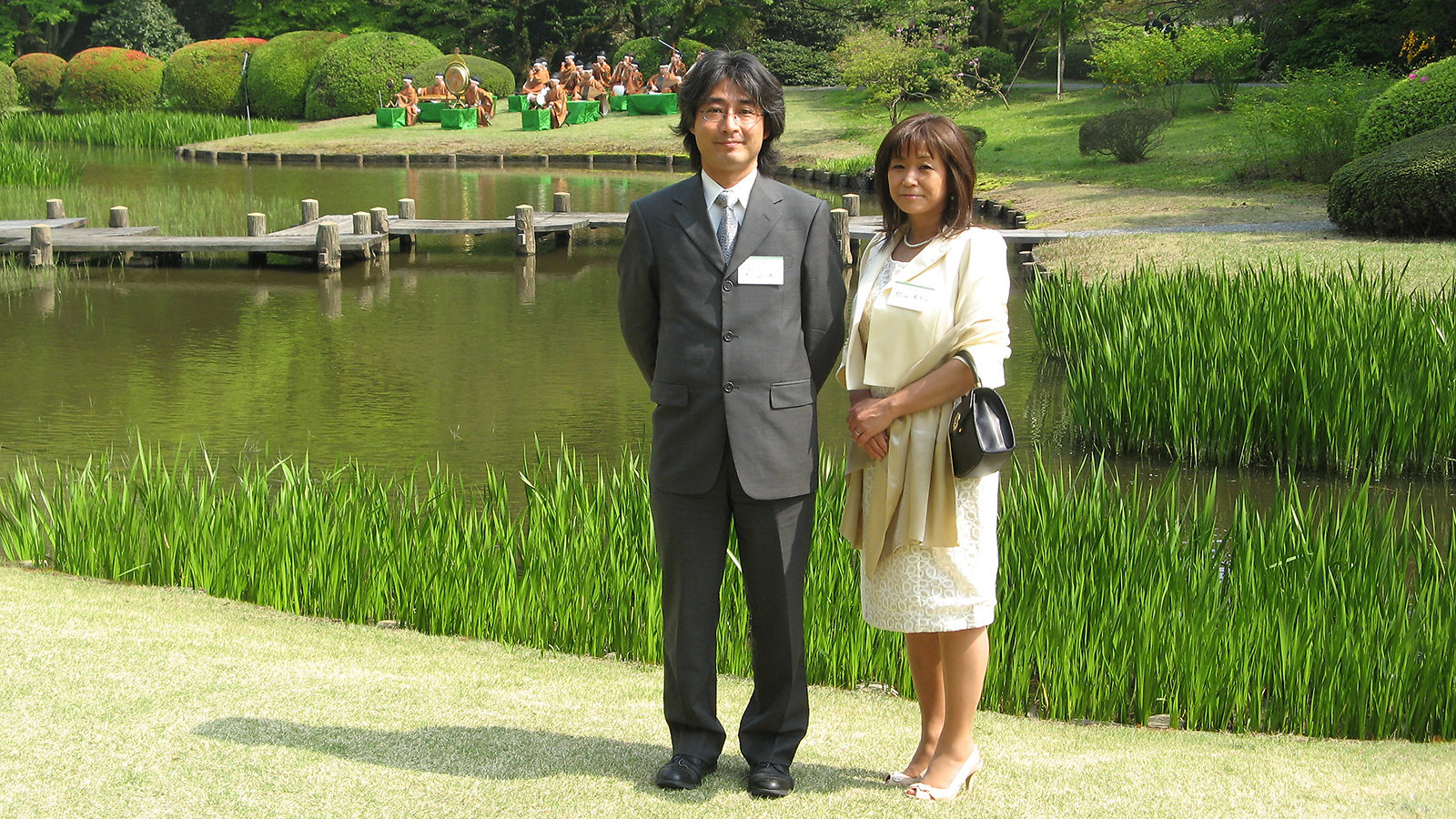 When I assumed the position of director of the Institute for the Physics and Mathematics of the Universe (IPMU), my smart-mouthed friends joked that I became the Director of the Universe. They didn't imagine that I was going to meet somebody whose title would have made him a deity less than seven decades ago.

When I assumed the position of director of the Institute for the Physics and Mathematics of the Universe (IPMU), my smart-mouthed friends joked that I became the Director of the Universe. They didn’t imagine that I was going to meet somebody whose title would have made him a deity less than seven decades ago.

In the heart of the concrete jungle in downtown Tokyo, there is a meticulously cared-for Akasaka garden, off-limits to the general public. It is a part of the Akasaka Estate that serves as a residence for the Japanese Imperial family members, spanning 135 tranquil acres in the midst of the buzzing metropolis. Twice a year, the Emperor and Empress invite about 2000 guests to this beautiful garden to honor their service to the nation. This spring I was one of them, thanks to a strong recommendation from the Ministry of Education that funds IPMU. I was flattered, and scared.

For a person who spent 14 years on the Berkeley campus in jeans, the first reaction to the invitation card decorated with the Imperial emblem was, “Oh my goodness, what shall I wear?” Fortunately, according to many blogs written by former invitees that my wife found, a regular dark suit would do the job. I had exactly one. We also learned what we were not supposed to do. No photos of the Imperial family and no touching, even handshakes. But we could have a brief conversation. Another useful piece of information was that the guests arrive in cars, not on foot. My wife, who still lives in our home in Berkeley, came over just for this occasion, and we got into an orange cab. The driver told us that he had driven into the garden only twice in his 20-plus years of service. He proudly displayed on his dash the permit we had received with the invitation. As the cab approached the entrance of the garden, we couldn’t help notice that all the other cars around us were black limos. When we arrived at the drop-off, we exhaled a sigh of relief upon finding at least two more brightly colored cabs. 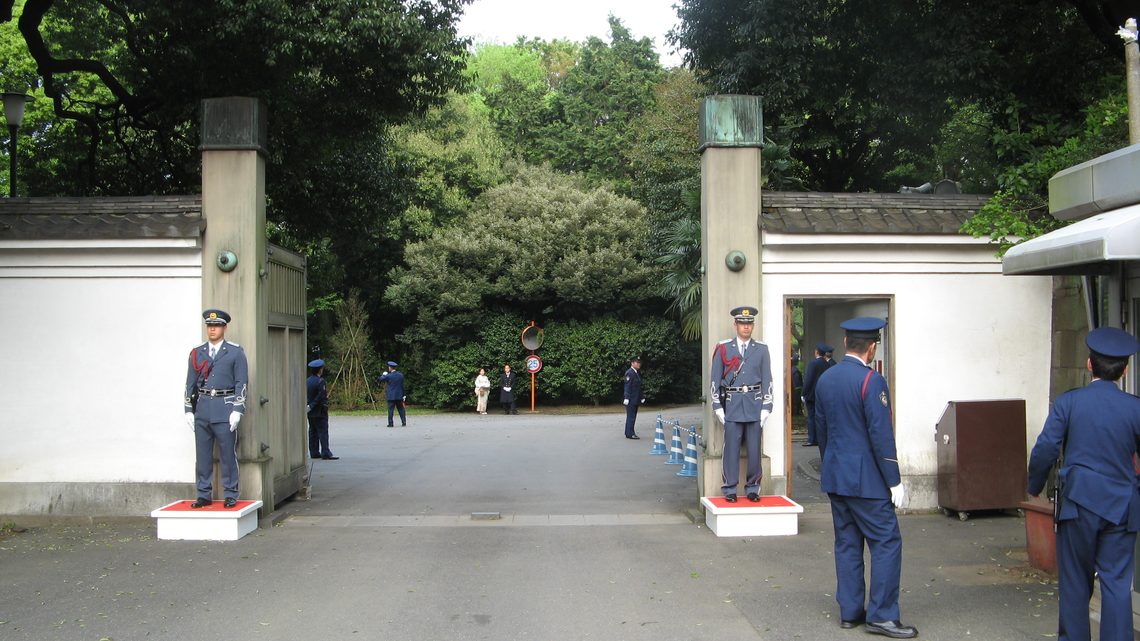 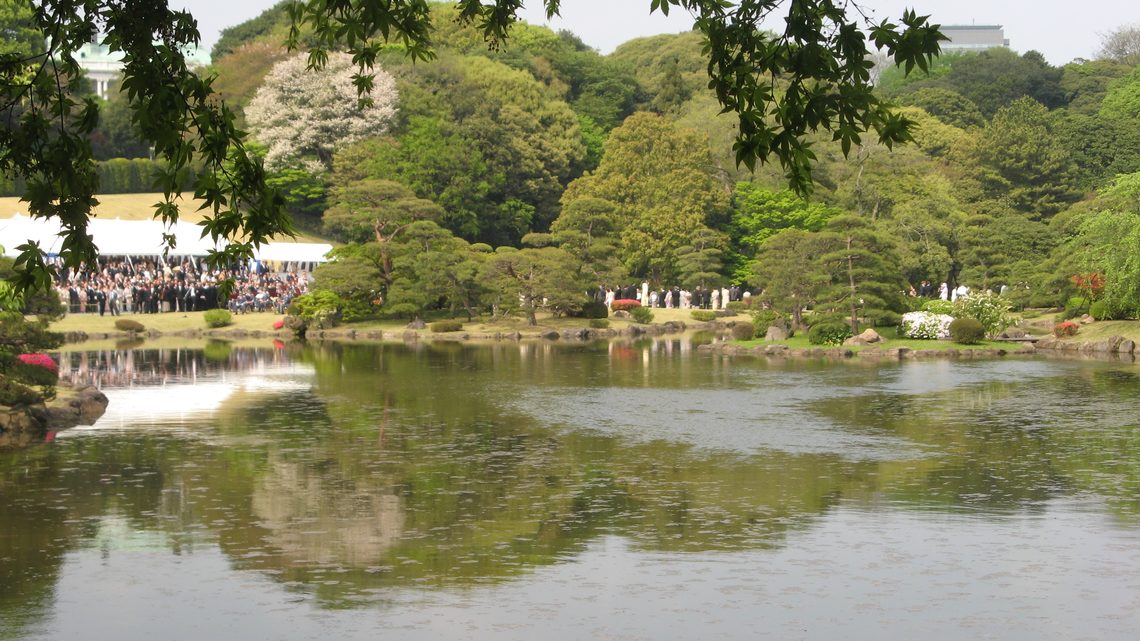 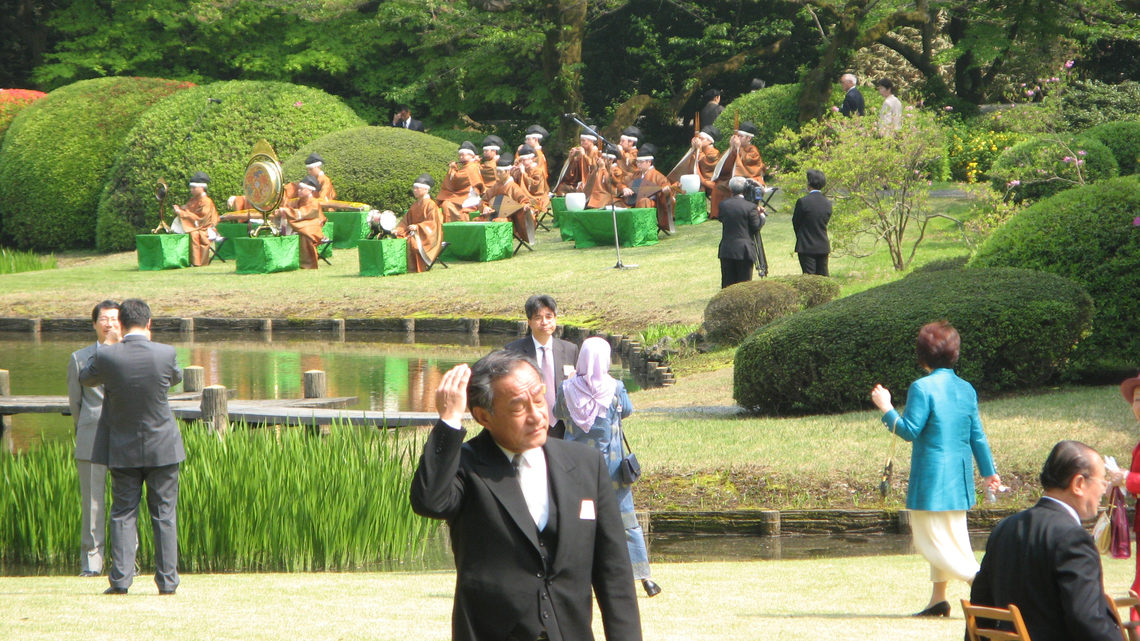 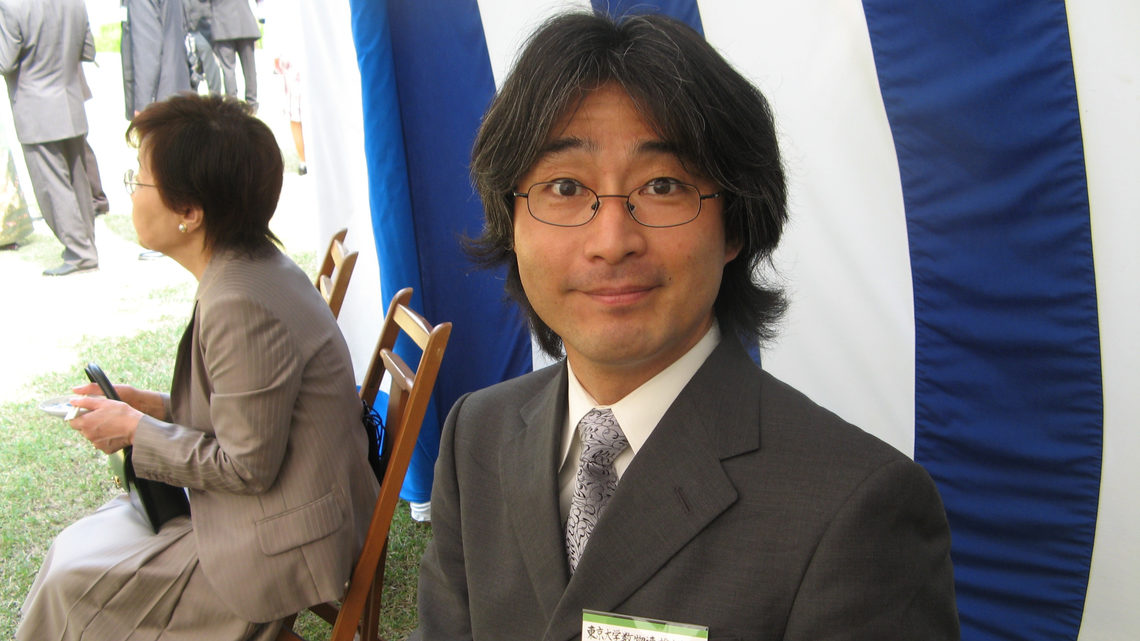 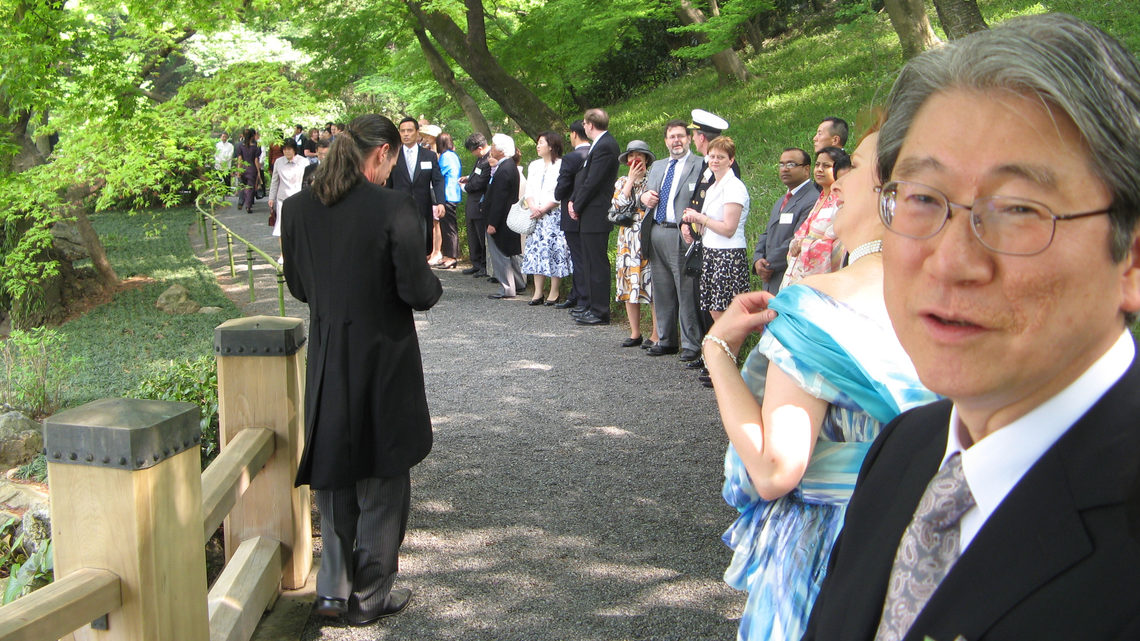 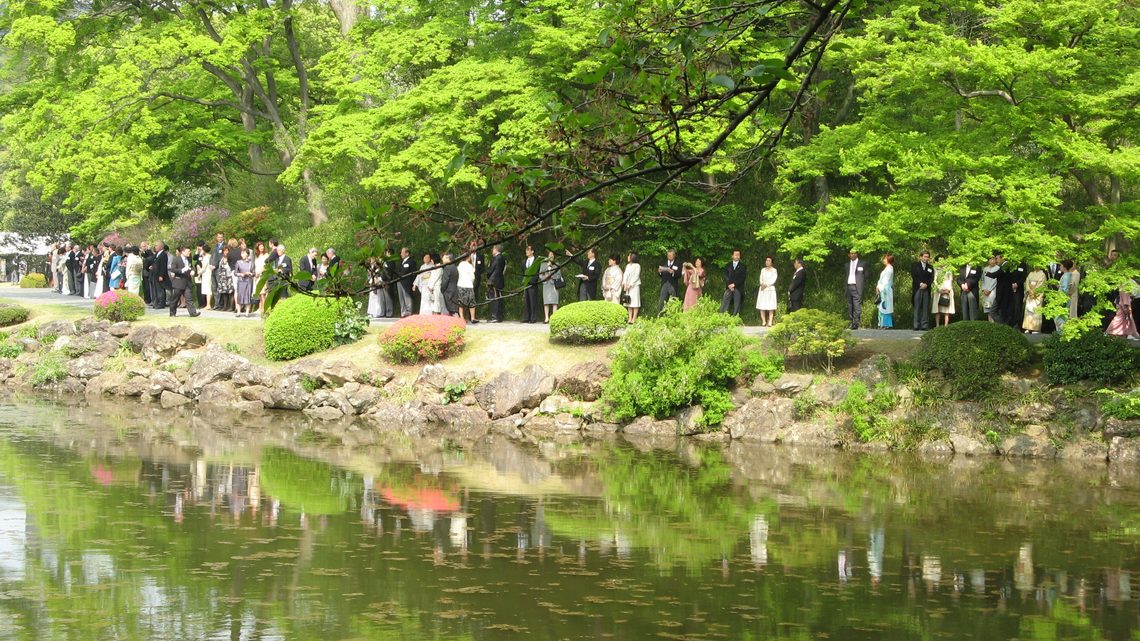 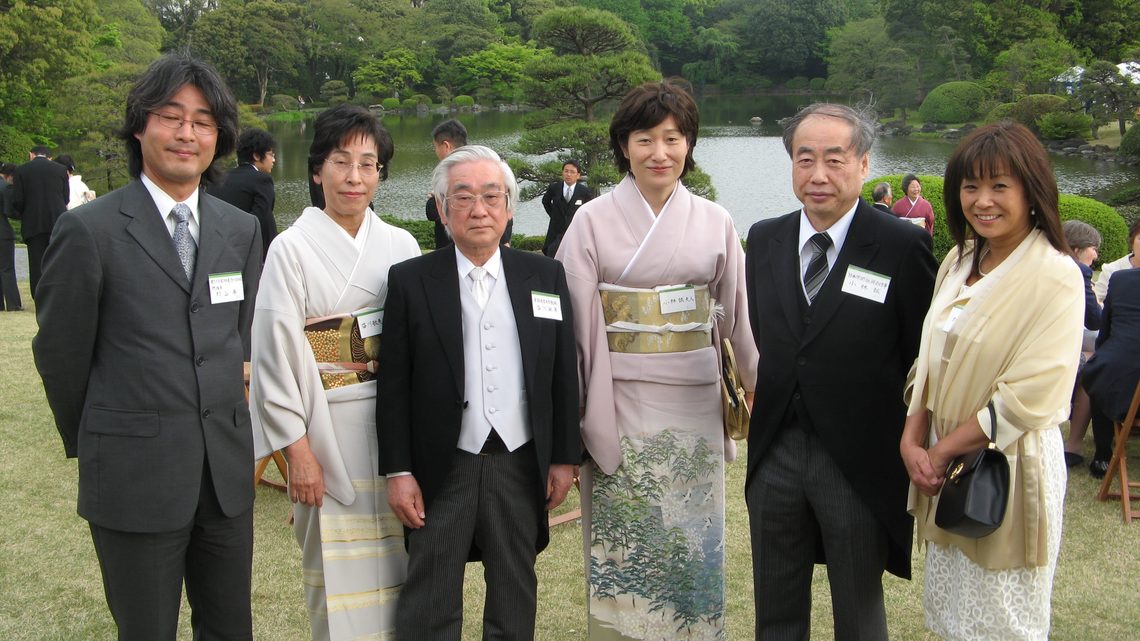 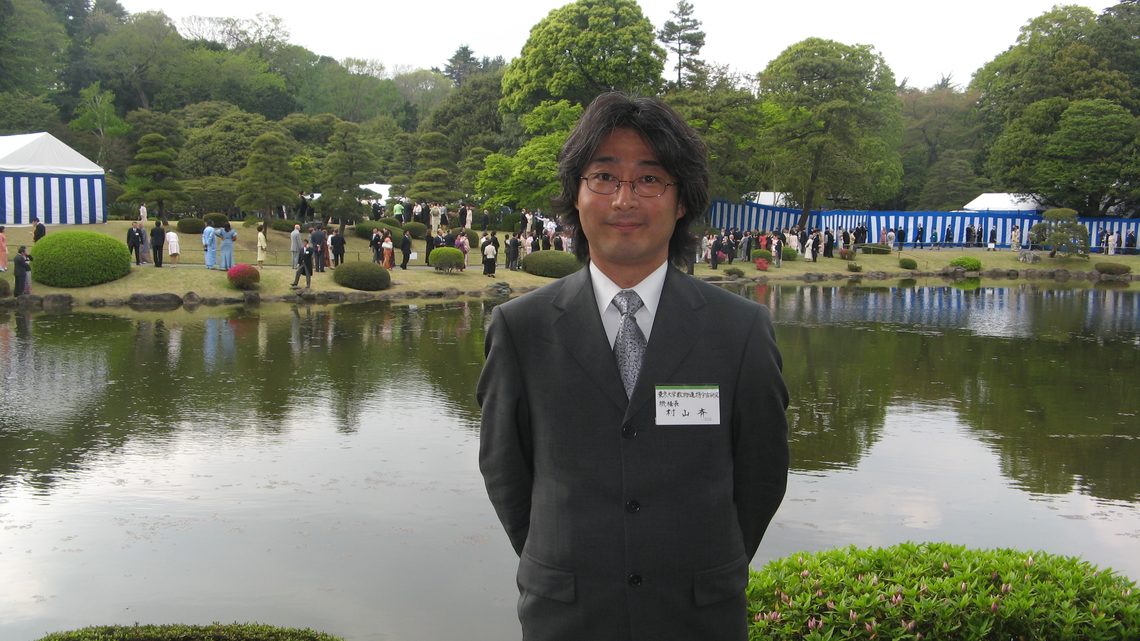 Courtesy of Hitoshi Murayama
Previous Next

The party started with a peaceful performance of ga-gaku, an adagio-paced style of music more than a millennium old. We enjoyed characteristically understated yet high-quality hors d’oeuvres and drinks. Looking at the name-tags others wore, however, we felt completely out of place. Most others clearly deserved the honor: retired high-level government officials, members of the Congress, governors, mayors, and diplomats from other countries clad in their ethnic dresses.

We could spot a few academics, however. I knew exactly two other invitees: Makoto Kobayashi and Toshihide Maskawa. They had just won the Nobel Prize in Physics last winter for their theory that explains why the world of antimatter is not the exact mirror of the world of matter we live in. Never mind that their theory does not explain why we do not have to worry about any antimatter around us. If you believe Dan Brown’s Angels & Demons, our existence is threatened by antimatter in the real universe, where we can’t count on Tom Hanks to save the day. I actually think that ghostly neutrinos played the role of Camerlengo, who took the antimatter away on a helicopter. Unlike in the movie, it must have happened when the universe was less than 10-25 seconds old, removing most of the antimatter so it would never play a role in our everyday lives.

About an hour later, the Japanese anthem that hails the reign of the Emperor filled the garden, announcing that the Imperial family had arrived and had started to walk around the lake. Everybody made a long line around the lake, waiting for them to pass by each one of us.

Physicists are well known to run quick-and-dirty math. The whole walk by the Imperial family was scheduled for less than two hours. For 2000 attendees, each of us gets about three seconds. I wondered what words I could possibly mouth that were worthy of their precious seconds.

I told the emperor that I am trying to attack the mysteries of the universe, and am building a new international research institute. He wished me good luck.

We had waited for about 90 minutes when a man looking like a butler told us that our time was nigh. We became stiff.

We saw the Emperor and Empress approaching us. They had an aura of style and elegance, and were surprisingly friendly. They studied each one’s name-tag, and spoke appropriate words of appreciation.

To a retired officer of the Self Defense Army, they thanked him for the important service. To the head of a fire department, they encouraged him to keep up the good work. All their remarks were right on, yet brief. In response, nobody said much beyond a “thank you” and a bow. And they steadily, but not hastily, moved on.

When the Emperor approached me, he stared at my name-tag. I realized I had an amusing advantage. My title was long, and it did not make sense right away. He then asked me what I did. An opportunity for a conversation! I told him that I am trying to attack the mysteries of the universe, and am building a new international research institute. He wished me good luck.

The Empress followed and asked what the name of the institute meant. In addition to answering her question, I took the opportunity to tell her that we did not understand 96 percent of the universe. She looked genuinely surprised.

The best moment was when the Crown Prince came by. I knew that the previous Emperor studied biology, and even discovered new species of hydrozoa. To my pleasant surprise, Prince Naruhito was interested in astronomy. He points a telescope at the sky, gazing at the stars, and tracks comets. He was excited about the universe. And of course I told him that we were trying to understand dark matter that we cannot see in the telescope. He was quite amused.

I suspect it is a mentally demanding job to meet 2000 strangers and figure out what appropriate words to give. They also maintain attractive smiles throughout their long walk. I’m convinced I cannot do this at all. This realization made me appreciate the whole experience all the more.

After the Imperial family retired, the crowd started to disappear. We walked round the lake and enjoyed the beautiful garden. It was a peaceful moment in a beautiful place. After trying to soak the whole thing in as much as we could, we walked out of the garden to the nearby Metro station.

Back to normal life. But I smiled at the thought that the Imperial family might be discussing the nature of dark matter.