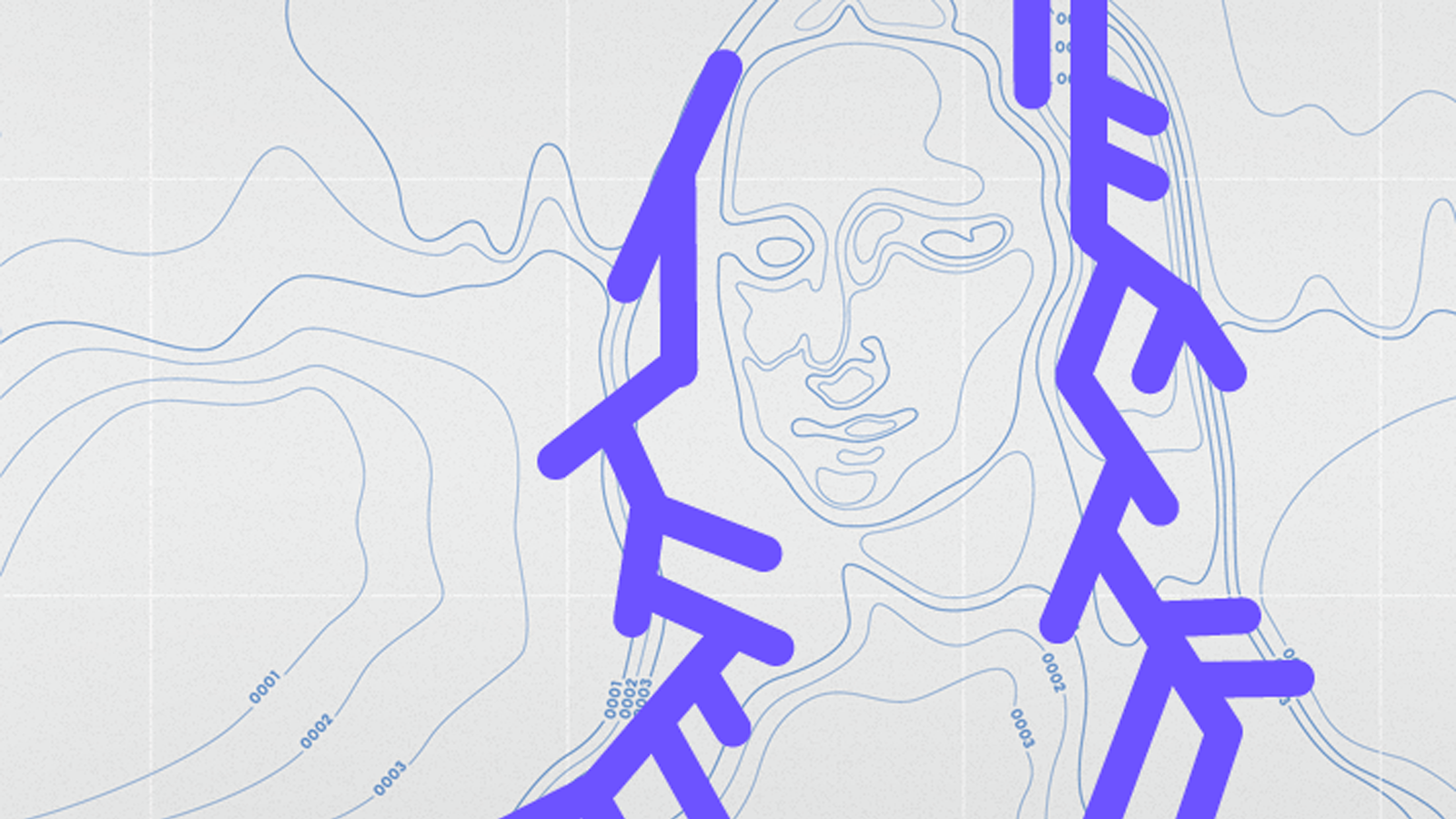 Stunning displays of light, music, and electronic artistry bring the thrill of science to a tech-savvy generation.

The students have control. They made the lightning flash above and brought the dancers to the hall. They captured the rhythm of cosmic rays and added techno. In a swanky dance club, towering stacks of speakers would dominate the room. But here, at the cosmic dance party, they've been replaced with headphones.

While dancing, a partygoer points to a device strung from the ceiling. "So that's one of the detectors?" she asks a friend as she lifts her headphones. "Particles go through there? And that's where the music's from?"

Above her, the domed ceiling pulses and explodes with lights timed to the particle showers that scatter through the atmosphere and hit the detectors. They are like giant keyboards tapping out different notes depending on where the particles strike and at what angles. The DJs have made the music, but the universe sets the pitch and timing. The result: bolts of light in patterns like tree roots spill across the ceiling to the cascading beat of dance music. Meanwhile, partiers, taking a break from dancing, glance through descriptions and images of the detectors, posted on benches.

Meet the future of science outreach.

The award-winning cosmic dance event in the Netherlands is far from your typical public lecture on science. It is an example of scientists seeking new ways to express complex ideas through art, and artists pushing to incorporate more science. Add to that a technological revolution that is blowing the lid off the traditional tool boxes for artists and scientists, and the results blur the lines between science, art, and entertainment.

The born-digital generation sidesteps the top-down form of communication common to their prime-time news-watching parents. Audiences can now choose the way they receive news and learn about science. Information finds them in new and unexpected ways. Two-way dialogue through commenting and interactive features is the new standard.

Roger Malina, an astrophysicist-turned-arts and humanities researcher who specializes in art-science collaborations at the University of Texas, Dallas, remembers sitting in many lectures and feeling, well, lectured to.

At a recent event he attended, an audience member stood up and asked a question that had been all over the news in 2008, before a court dismissed a lawsuit alleging the dangers of particle accelerators: "Are you concerned that the Large Hadron Collider might create a black hole that engulfs the world?"

"No," responded the scientist. "This work is peer reviewed," he said, "and any talk of black holes is complete nonsense."

That seemingly condescending reply immediately set the wrong tone for the dialogue with the audience. The lecturer instead could have addressed this widely felt public fear and explained the facts refuting the threat.

"When you start telling people: 'We're experts. Don't worry about it,' that's the best way to turn off the public," says Malina. "We have to open up that process somehow to the public. It's not a one-way street. It's also how the culture can more broadly enter into the debate of science and create a more socially robust science."

One of the most engrained challenges facing art-science collaborations, he says, is the inability or unwillingness of scientists to include the public or tailor the conversation to take into account public perceptions.

Yet these conversations are changing as more scientists explore new ways to engage audiences, such as the cosmic dance party, while artists increasingly delve into science topics so complex they're often seen by the public as borderline mystical.

Art and entertainment in the geek era

Not everyone thinks combining art and science is the best way to build a science-literate public.

Some art-inspired outreach has attempted to address that concern by modifying the goal from teaching the science to simply exposing the public to overarching scientific concepts or even just terminology.

"The Big Bang Theory"—now in its fifth season on TV and currently drawing in more than 16 million viewers—never relies on physics as the plot, but it's always in the background. "In getting the words out there, whether it's 'dark matter' or 'topological insulators,' hopefully some fraction of the audience will Google it," says David Saltzberg, science adviser to the show and physicist at the University of California, Los Angeles.

The sitcom borrows from concepts like Heisenberg's uncertainty principle or last year's supposed faster-than-light neutrino results to sprinkle authenticity into the backgrounds of the physicist characters.

Saltzberg says the audience shouldn't be expected to understand the science. "You can watch an 'I Love Lucy' rerun and not understand Spanish, but still understand that Ricky Ricardo is angry," Saltzberg says. "That's all the level of science understanding needed for the show."

On some level, dropping the details, focusing on the entertainment value and bringing the science to people in their living rooms is working. According to a survey mentioned in the UK newspaper The Guardian, enrollment in college physics courses has risen along with the show's popularity.

"As scientists, we tend to underestimate how esoteric we are," Malina says. "We deal with concepts and words that are just not part of general daily life. Very often we end up mystifying people, rather than engaging them. Just getting people familiar with some of the technology and concepts without trying to do science education I think is an important part of the cultural appropriation of science."

In the last 10 to 15 years, one force has been driving this appropriation of science and technology in art and pop culture, and it's the currency that runs the world today: data.

"The sharing of tools has provided common vocabularies and new meeting grounds for artists and scientists," says Malina. "Not true 30 years ago—you could take all the computer artists on the planet and they'd fit in one conference room."

The interactive artwork of renowned Japanese artist Takuro Osaka, for example, takes data from cosmic-ray events and creates visual art: Liquid-scintillator detectors track the cosmic particles and send signals in real time to arrays of LED light displays. Bridges, building facades, and even German ruins have been the canvas for Osaka's work, which spans 18 years of cosmic-ray projects. His pieces have even piqued the interest of JAXA, the Japanese space agency, leading to a recent zero-gravity light show performed by astronauts on board the International Space Station. 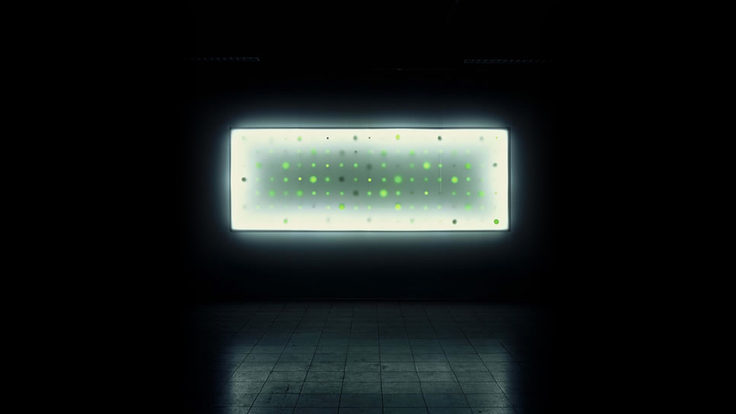 Interactive Artwork: Appearance and Disappearance
Renowned artist Takuro Osaka created this piece for his exhibition in Marl, Germany, in 2004. The green light varies in intensity and turns off when a cosmic ray hits the particle detector connected to the LEDs. For Osaka, the change in light is a metaphor for the birth and death of the world. 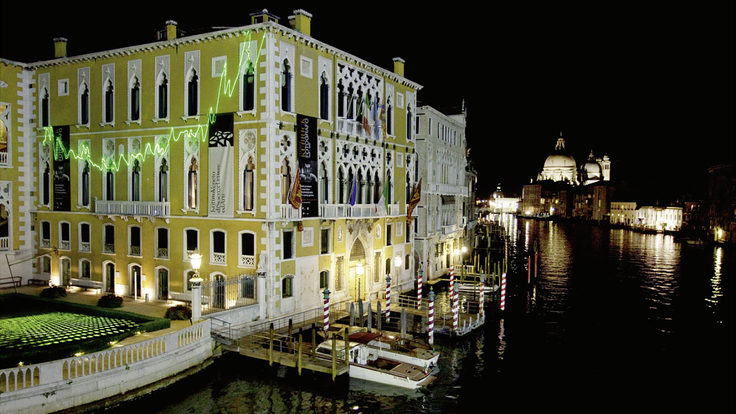 Laser Installation: From the Distant Past
This laser installation on Venice's Palazzo Franchetti was created by German artist Tim Otto Roth. The motion of the green scanning laser is based on observations of distant galaxies by the Hubble Space Telescope

Osaka's use of cosmic particles has, in turn, inspired other artists to take on much larger data sets. A project by German artist Tim Otto Roth, for instance, translated spectrographic data from the Hubble telescope into laser light shows, splashed like dancing line graphs across building fronts.

"We now have a large part of the culture that was born digital. They're very familiar with working with data," Malina says. "Artists' studios often have high-end equipment and computers. The artists are using the same tools scientists are using—a little bit like the Renaissance, when perspective became an important technology for artists and scientists." This common ground of technology made it easy for Dutch physicist and techno enthusiast Sijbrand de Jong to explain to his general physics class at Radboud University the science of cosmic rays, and for them to take that knowledge and help create the cosmic dance event.

De Jong, who worked on the DZero experiment at Fermilab's Tevatron and studied cosmic rays at the Pierre Auger Observatory in the remote highlands of Argentina, explained to his students that high-energy cosmic particles are beaming through the universe at close to the speed of light. The students, who were heading into fields like law, medicine and psychology, figured that other people—even those who would never seek out the science—would also find it fascinating and engaging.

From that moment, de Jong and his students began a plan to take the science public—and it became a dance party like no other.