Physicists have used advances in accelerator technology to develop a revolutionary machine-the Linac Coherent Light Source-for exploring the world on the smallest and fastest scales. Physicist Herman Winick describes the start of the LCLS and the spectacular results that are now rolling in. 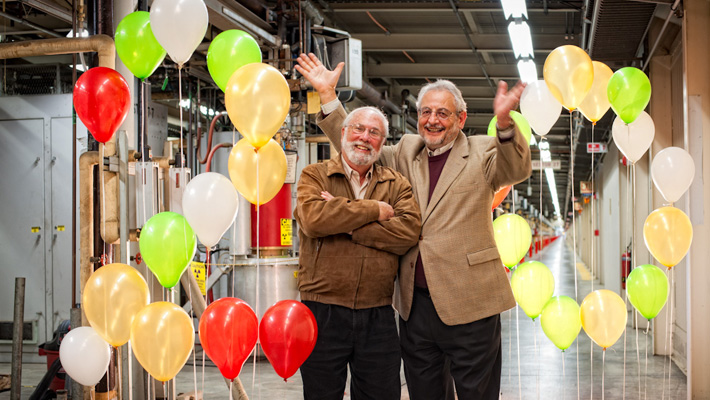 Physicists have used advances in accelerator technology to develop a revolutionary machine-the Linac Coherent Light Source-for exploring the world on the smallest and fastest scales. Physicist Herman Winick describes the start of the LCLS and the spectacular results that are now rolling in.

Accelerators originally designed for high-energy physics have made lasting impacts in such wide-ranging fields as medicine, defense, mining, and even food packaging. And three specific advances in accelerator technology came together to open an exciting new era for science: the birth of the Linac Coherent Light Source, the world's first hard X-ray free-electron laser.

The idea of building the LCLS at SLAC National Accelerator Laboratory really got started 20 years ago, when 146 scientists from around the world gathered at SLAC for the Workshop on Fourth Generation Light Sources. It was there that UCLA physicist Claudio Pellegrini proposed that a powerful new machine could produce sub-picosecond pulses at short X-ray wavelengths with an astonishing 10 gigawatts of peak power. What's more, Pellegrini suggested that it could be built at relatively low cost by making use of part of SLAC's existing 2-mile-long electron linear accelerator.

Such a source would give scientists the unique ability to take crisp pictures of atomic motion and changes in chemical bondsincluding dynamic processes never before witnessed. It would also greatly enhance the opportunities for research in the "water window"wavelengths of X-rays particularly suitable for studying carbon-containing materials, such as human cells. In short, such a machine had the potential to revolutionize the field of X-ray photon science.

As Pellegrini wrote in the conclusion of his 1992 paper describing the concept, "the radiation brightness [of the proposed machine] far exceeds any other source existing or under construction, and would open a completely new region of experimentation."

Even before the 1992 workshop, Pellegrini and others had done much theoretical work to establish the theory of a free-electron laser producing so-called "hard" X-rays with wavelengths of less than one nanometer—in other words, of roughly atomic dimensions. Much had also gone into understanding what kind of electron beams would be needed to drive such a free-electron laser at these short wavelengths. But Pellegrini's suggestion that it would be possible to modify and use part of the SLAC linac to achieve this goal, at significantly lower cost than building a new linear accelerator, galvanized me and others to join him to begin to study this in detail.

Pellegrini pointed to developments in three areas of accelerator technology that enabled his proposal:

In a series of monthly meetings, starting less than four weeks after the Fourth Generation Workshop, a group of about 20 scientists began a study leading to the first proposal for a modest free-electron laser. Most were accelerator physicists, from SLAC, UCLA, Europe's CERN particle physics laboratory, Germany's DESY lab, and Lawrence Berkeley, Lawrence Livermore, Argonne and Brookhaven national labs.

A remarkable feature of these meetings was that all the participants had major responsibilities in their regular day jobs. I merely sent out an e-mail announcing the topics to be discussed at the next meeting and they came, often from a great distance, out of interest and eagerness to contribute their special skills and experience to what we all perceived to be an exciting venture. Not only did they come to the monthly meetings, but many also presented the work they had done between meetings.

Pellegrini, who is now at SLAC, was the driving figure in these meetings, engaging specialists in all the relevant areas and pointing out where more detailed study and experimental R&D were needed. By November 1992, work done at these meetings led to an outside review of a preliminary proposal for the free-electron laser at SLAC.

This modest initial proposal morphed into the LCLS, producing pulses as short as 10 femtoseconds (one femtosecond is one millionth of one billionth of a second) at wavelengths down to about 0.1 nanometers. These pulses are so revolutionary that the LCLS is in extremely high demand; currently, only one out of four experimental proposals can be undertaken at the LCLS.

As a result, SLAC is now planning an upgrade, LCLS-II, to enhance and expand the facility's avenues for scientific discovery. LCLS-II will triple Pellegrini's dream, with two new X-ray laser beams and room for four new instruments. Long-term plans call for additional expansion through 2025, accommodating up to 2000 scientists per year at up to a dozen experimental stations.

And it's all thanks to the remarkable vision of Pellegrini and a team of dedicated accelerator physicists.

SLAC's Herman Winick played a strong leadership role in the development of synchrotron radiation sources and research at Stanford University and around the world. Since retiring as deputy director of the Stanford Synchrotron Radiation Laboratory, he has continued to work on international science, academic freedom, and human rights, focusing largely on the SESAME project, which he began with Gus Voss from Germany's DESY lab in 1997.