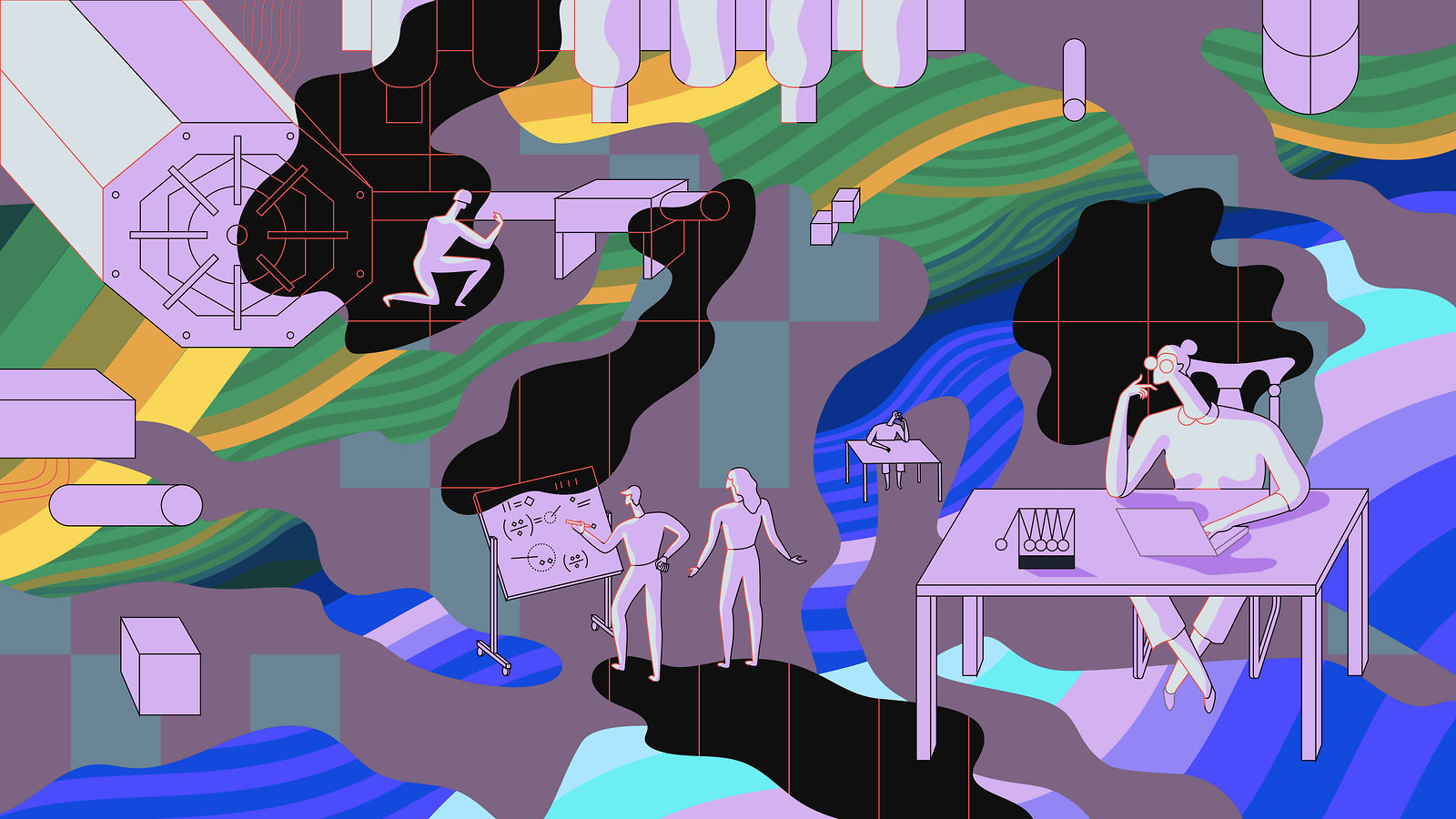 From a young age, Philip Schuster knew he wanted to go into particle physics. As an undergraduate, he became involved in a number of research projects with experimentalists. But, like many other students pursuing a career in physics, he reached a point when he had to narrow his path.

“When you’re going into graduate school, you have to make a very stark choice between going in the direction of theory or experiment,” says Schuster, now a theorist at SLAC National Accelerator Laboratory. “One of the reasons for that is that either one takes a tremendous investment and commitment of time. It’s just not practical to do both simultaneously.”

As much as he enjoyed the hands-on feeling of experiments, Schuster felt a stronger pull down the theory route. But he continued to keep an eye on what was happening in the world of experiment.

Falling through the cracks

Toward the end of his graduate education around 2007, Schuster wound up embedded with an experimental group working with data from the Large Hadron Collider. Although his work was still theoretical, this experience rekindled an interest in experimental physics that carried through into his postdoctoral fellowship.

Together with Natalia Toro, also a theorist SLAC, and Rouven Essig, a theorist at Stony Brook University, Schuster began developing a series of ideas for an experiment that could leverage existing equipment to look for new forces that might be related to dark matter. The three teamed up with Bogdan Wojtsekhowski, an experimentalist at Thomas Jefferson National Accelerator Facility, to co-lead the experiment, called A Prime Experiment, or APEX.

At the time, spearheading experiments was considered a dangerous move for theorists. Many feared that physicists could end up falling into the cracks between theory and experiment, landing in a place where their work would be unappreciated by both sides. But the seemingly impossible hunt for dark matter called for new approaches.

“We knew we were taking a risk,” Schuster says. “And because so few people were doing it at the time, the risk felt even more vivid.

“I remember being a little worried about it from time to time. But whenever I stood back, I could see that we had this physics problem that was going to require both theory and new experiments to answer.”

There wasn’t always so much distinction between experiment and theory in physics. From Galileo Galilei to Isaac Newton, many of the great physicists had to use both theory and experiment. But as the field expanded, so did the scale of the experiments and the complexity of the theory. The larger and more challenging the experiments grew, and the more elaborate the theories became, the higher the level of specialization and expertise scientists required to work on them.

“At first it wasn't so much a split as it was just a sharpening of roles,” Schuster says. “People who tended to be a little bit more inclined to mathematical modeling versus actually tinkering. But with the discovery and development of quantum mechanics, you really had to specialize in something to make any sort of progress. The divide deepened out of a necessity, and it just became much more entrenched with time.”

But in the past decade, a new trend has emerged. In the scramble to detect dark matter particles, more and more theorists have been dreaming up experiments that can tackle the problem from new perspectives.

“Over the last few years, we’ve been going back to the drawing board,” says Mariangela Lisanti, a theorist at Princeton University. “There has been a renaissance in dark matter science that calls for a much closer collaboration between the two communities, so people have been moving closer to that boundary as a result.”

A large part of this, Essig says, is that physicists have been expanding the type of dark matter candidates they’re interested in, requiring new ideas on how to find them.

“Most of us go into science because we want to understand the world,” says David Spergel, a theoretical astrophysicist at Princeton University. “We want to be able to compare theoretical ideas with experiments, and there's no better way to do that than to be directly involved in the experiment. I think it's very valuable for us to ask the question, ‘What types of new experiments should be done to advance our knowledge of fundamental physics?’”

Back to the basics

To broaden the search for dark matter, physicists have gone back to the basics, in a way—designing smaller-scale experiments that can often fit on tabletops. These smaller and less expensive experimental setups and collaborations provide a perfect avenue for theorists to explore new ideas.

“These little experiments are kind of moving into the mainstream, and that's been a really good thing,” says Jonathan Feng, a theorist at University California, Irvine. “There are some really interesting ideas out there, and any one of them can actually discover dark matter or some new particle and just change our whole view of what's going on.”

Many of these small experiments are fueled by collaboration between theorists and experimentalists. Recently, Feng worked with experimentalists to design FASER, a small dark matter experiment sitting in the LHC tunnel that looks for exotic weakly interacting particles produced in collisions. David Casper, an experimentalist involved in the project, says that Feng and the other theorists have been instrumental in the process.

“This experiment was really their idea,” Casper says. “This wasn’t theorists becoming involved in experiment. It was experimentalists joining theorists to make their idea a reality.”

This synergy between theorists and experimentalists in the hunt has been a driving force for why many physicists do what they do. Lisanti says she’s always been interested in flying close to the interface between the two disciplines.

“Collaborating closely with experimentalists and thinking of new ways to shed light on patterns in the data is what I love spending my days doing,” she says. “I can't imagine any other thing that would be more fun.”

Now, the trend of theorists proposing experiments has become so common that it’s almost expected of new students entering the field. The hope is that flooding the field with new ideas could finally lead to the discovery of dark matter.

“I was at a conference a few months ago and I heard a few people joking that you’re not a real theorist until you’ve done an experiment,” Feng says. “For a while people had this idea that theorists were only meant to devise high-minded, beautiful thoughts and theories of everything. But sometimes we need to get our hands dirty and make sure we’re covering as many bases as we can.”