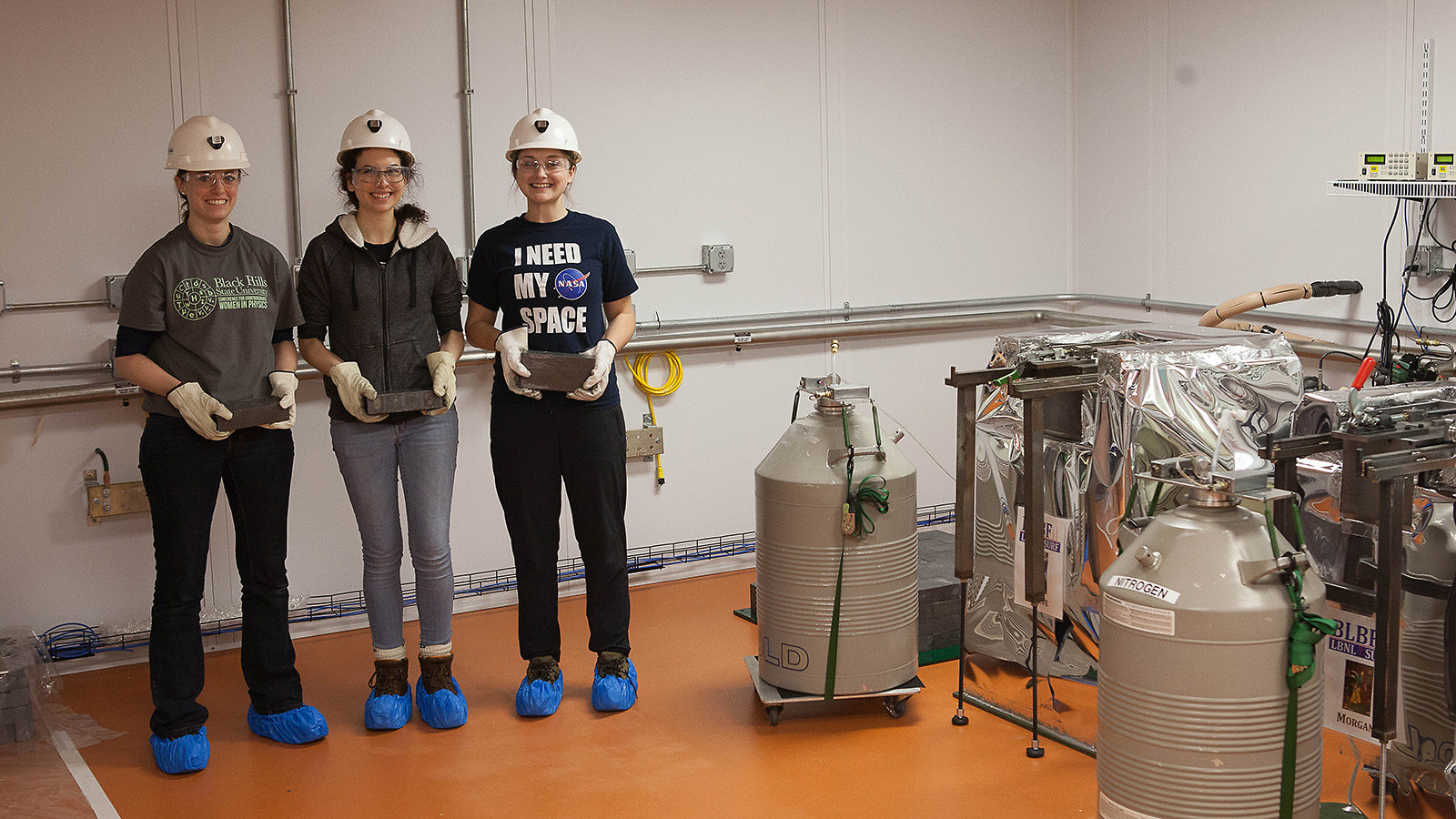 Twice a week, when junior Arthur Turner heads to class at Black Hills State University in Spearfish, South Dakota, he takes an elevator to what is possibly the first nearly mile-deep educational campus in the world.

Groundwater sprinkles on his head as he travels 10 minutes and 4850 feet into a gold-mine-turned-research-facility. His goal is to help physicists there search for the origins of dark matter and the properties of neutrinos.

Sanford Underground Research Facility opened in 2007, five years after the closure of the Homestake Gold Mine. The mile of bedrock above acts as a natural shield, blocking most of the radiation that can interfere with sensitive physics experiments.

“Every screw, every piece of material, has to be screened,” says BHSU Underground Campus Lab Director Brianna Mount.

BHSU offered to help Sanford Lab with this in 2014 by funding a cleanroom to maintain the background-radiation-counting detectors used to check incoming materials. Once the materials have been cleared, they can help with current experiments or build the next generation of sensitive instruments.

Heise is particularly excited for the capability to build a new generation of dark matter and neutrino detectors.

“As physics experiments become more and more sensitive, the materials from which they're made need to be that much cleaner,” Heise says. “And that's where these counters come into play, helping us to get the best materials, to fabricate these next-generation experiments."

In return, Sanford Lab offered to host an underground campus for BHSU. Two cleanrooms—one dedicated to physics and the other dedicated to biology—allow students and faculty to conduct a variety of experiments.

The lab finished outfitting the space in September 2015. Even though it’s a mile underground, the counters require their own shielding because the local rock and any nearby ductwork or concrete will give off a small amount of radiation.

Once the lab was fully shielded, a group of students, including Turner, moved in a microscope and two low-background counters. After exiting the freight elevator, also known as the cage, the students walked into an old mine shaft. Then they hiked roughly half a mile to the cleanrooms, meandering through old tunnels with floors that sparkle with mica, a common grain in the bedrock.

“It's just been one of the coolest things that I've ever been a part of … to actually see what physics researchers do,” Turner says.

All three of the instruments the students installed were quickly put to use. Heise expects that they will triple that number this year with the addition of six more detectors from labs and universities across the US.

With the opening of the underground campus, physics students can now work on low-background counting experiments in the mine. And biology students go to sites in the far regions of the mine (the facility extends as far as 8000 feet underground but is mostly buried in water below about 5800 feet) and sample water in order to study the fungi and bacteria that live there with no light and low oxygen. These critters might exist in similar crevasses on Mars or Jupiter’s moons, or they might hold the key to developing new types of antibiotics here on Earth. The students can now bring samples back to the underground laboratory (instead of having to haul them to BHSU’s main campus while packed in dry ice).

Students with non-science majors are using the new campus to their advantage too. “We've also had education majors and even a photography major underground,” Mount says. But that’s not all. Mount welcomes research ideas from students across the US—from different universities down to the littlest scientists, as young as kindergarteners.

Although lab benches are installed in the cleanroom, it can’t easily accommodate 30 students, a typical class size, and students under the age of 18 legally cannot enter the underground lab. But BHSU has found ways to engage the students who can’t make the trek.

A professor can perform an experiment underground while a Swivl—a small robot that supports an iPad—follows him or her around the lab, streaming video back to a classroom. And the cleanroom microscope is hooked up to the Internet, allowing students to view slides in real time, something they will eventually be able to do from several states away.